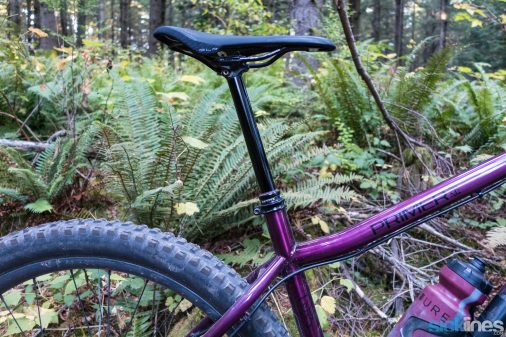 As we approach the 6 month mark riding the Bike Yoke Revive, it’s time to find out how it has held up…

Back in June we posted a full review of the Bike Yoke Revive dropper post. Right away, I was impressed with several features. The remote is fantastic, the ultra-short stack height makes longer drops accessible to more riders, and the ability to bleed it on-the-fly with just a t25 torx wrench position the Revive as having few equals. Over the course of this riding season I put hundreds of miles on my Chromag Primer test sled, often paying little attention to the well being of the Revive and it hasn’t missed a beat.

I used the Revive bleed function once while setting up the post and once since. Out of the box, some air had migrated during shipping and the bleed processes needed to be employed. Later, after storing it upside down and maybe some yanking on the saddle while the post was down caused a bit of air migration that was again, quickly remedied with a trail side bleed. Considering the number of rides and the number of times the bike has inadvertently been picked up by the saddle while it was lowered, the Revive has been nothing short of spectacular in its reliability. Having the reset (bleed) function when you need it yet rarely having to touch it is a beautiful thing. This is by far my favorite post to travel with, knowing I can always get it back to feeling perfect if it starts feeling a little soft off the top.

In mid June when my Orbea Rallon test bike showed up spec’d with a dropper known for having serious reliability issues, without hesitation, I swapped in a Bike Yoke Revive on my own dime. The Revive has not only been rock solid on my Rallon but allowed me to step up from 150 mm of drop to 160. There’s really nothing to report here other than the same flawless performance I observed with the post on my Primer. My Rallon has seen all the typical scenarios that cause dropper posts to get soft and or fail including tons of use, upside down storage, and careless lifting of the saddle. I haven’t bled the post on my Rallon since initial install, but it’s nice to know it’s there if I need it. Heck, I haven’t even had to adjust the remote or re-tension the cable.

Was there anything I didn’t like? The answer is, there’s not a whole heck of a lot to complain about. I don’t love the use of torx bolts for the post head but it’s not a huge issue. Recently, the industry has recently seen a rise in more affordable dropper posts such as OneUp’s dropper that matches the Revive on most specifications but costs $125 to $250 less depending on spec. That said, not the OneUp nor any other dropper on the market offers an equivalent on the fly bleed function. Is that enough to justify the cost? That’s a question that I can’t objectively answer but I’ll say I have enjoyed piece of mind knowing that I can almost certainly keep the Revive post running even if it’s just a bandaid until it needs service. In terms of anything the Revive might be lacking, the only thing I can think of is the ability to shim the post for less drop which can be super handy should you purchase, say, a 185 mm dropper and realize you only have room to fit 180 mm. But that’s getting pretty nit-picky and I can’t say I’ve ever run into that situation personally. So there you have it, 6 months, 2 posts, zero failures, maximum drop, minimum fuss. The Bike Yoke Revive is the best post I’ve tested and I can’t imagine anyone being disappointed in this quality piece of kit.