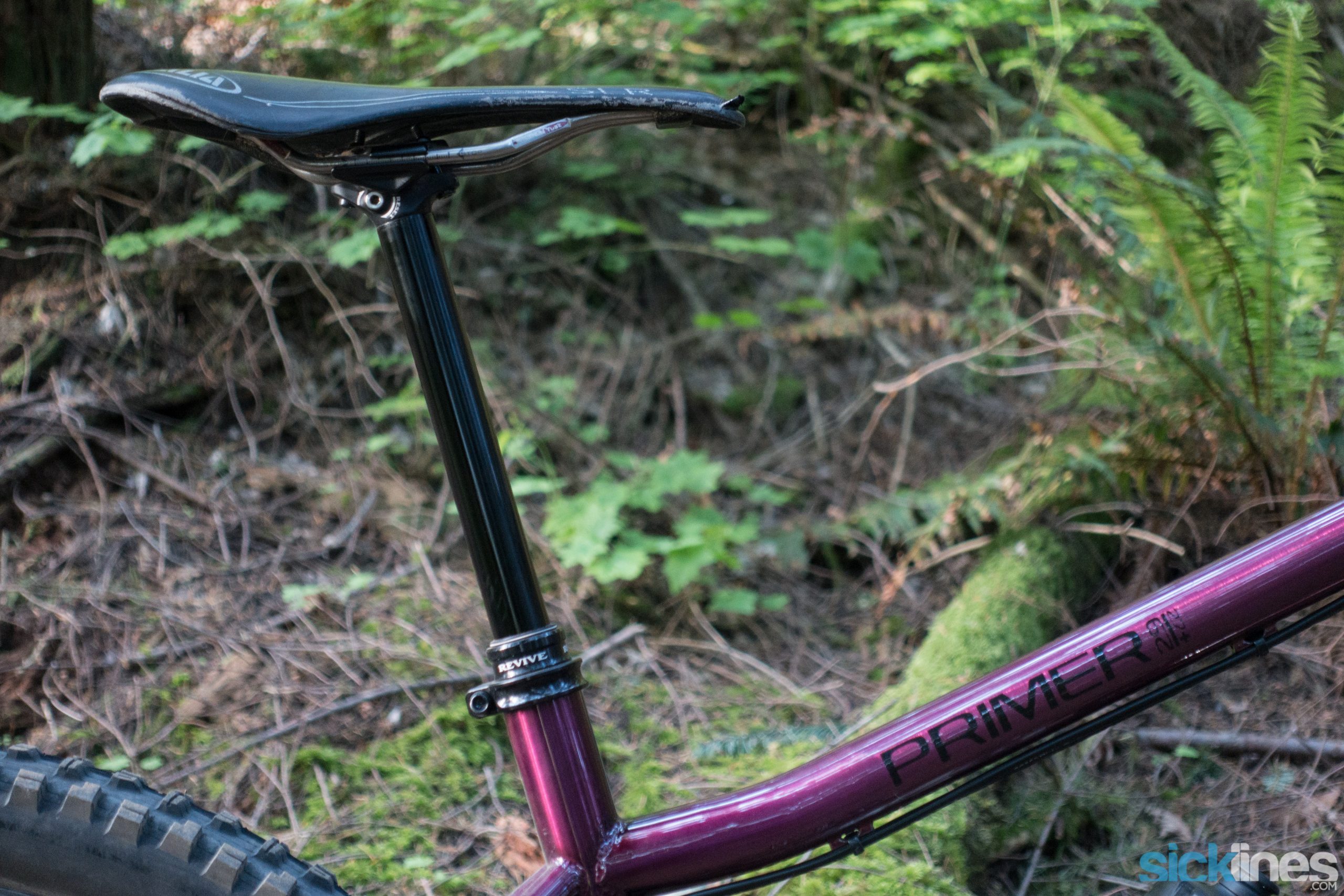 On my list of more interesting components to review this year is the Bike Yoke Revive dropper seatpost. Considering that there is no shortage of dropper posts on the market these days, it takes something special to stand out from the crowd. The folks at Bike Yoke have created just the thing. The Revive directly addresses two of the main issues with dropper posts. Bike Yoke figured out a way to address the fact that over time most dropper posts suffer from air migration around their internal seals resulting in a spongy feel when sat on. Second, they figured out how to dramatically reduce the overall length of the post relative to the amount of drop it delivers allowing riders to run more drop on a given frame.

I’ve been testing a 185 mm version of the Revive on a medium Chromag Primer. Now, I don’t know about you, but when I’m riding aggressive terrain, the less rear suspension travel I have, the more seatpost drop I like. This is especially true on a bike designed to be ridden as aggressive as the Primer. At 5’8″ with not particularly long legs, my preferred saddle height, measured from center BB to saddle top is about 29.25″. Now, my Primer, spec’d with a 17″ seat tube easily allows for maximum insertion but the collar to seat rail dimension becomes a problem on some posts over 150 mm. In other words, even though most any dropper post will slam to the seat collar on my test frame, what remains sticking out becomes an issue for me. For instance, the collar to rail height of a 170 mm Reverb is 235 mm per SRAM’s documentation. That same dimension on the 185 mm Revive is a mere 226.7 mm per Bike Yoke’s documentation. 8.3 mm or roughly 3/8″ might not sound like a lot but the extra height of the Reverb was enough to make it a no-go without cutting my seat tube. With the combination of a Revive and an old beat to shit Selle Italia SLR (super low stack height) I had in my spare parts bin I managed to squeak in a 185 mm dropper right at 29.25″, no cutting required and frame warranty remains in tact.

That leaves us with the other outstanding feature and the reason behind the Revive’s name. Should the dropper post ever develop that all too familiar spongy feel, indicating that air has migrated to somewhere it should not be, there’s a quick and dead simple bleed process to resolve it. We’re talking trail side, with a simple multi-tool, no fluids are involved, and the post doesn’t even have to be removed from the bike. Simply, use a 4mm allen key on the bolt head where the word “reset” is written on the post head. Turn the key clockwise until you feel a firm stop, lower the post, release the key, return the post to the extended position. Done. Dead fucking simple. Positively brilliant. In a dozen rides, I’ve only had to reset my post once and that was at initial install. Since then, the post has actuated perfectly and developed zero unwanted play or spongy feeling.

I like big drops and I cannot lie… Here’s a shot of that super low-profile collar which is a big reason why the Bike Yoke Revive boasts such a low stack height. If you’re not getting why I’m so high on maximizing seatpost drop then (in order of likelihood) you’re probably a.) a better rider than me, b.) not riding BC and PNW trails on the regular, c.) are new to this whole Mtb thing and need to pay attention before you smash a collar bone high-posting down a crazy line, or d.) ride a mountain bike and live in Florida. No matter where you fall, you’ve probably gotten the gist that I’m pretty stoked on this piece of hardware.

So what’s not to like about the Revive dropper post so far? Well, it’s not the remote because it’s actually really damn good too. It’s smooth as butter with a great shape, built from quality materials, and includes a sturdy but tidy mount (I’ve snapped a few Fox triggers). The remote, called the “Triggy”, is also compatible with Shimano I-Spec B, I-Spec II, SRAM Matchmaker, Hope, Magura Shiftmix, and Formula’s Mixmaster. Nailed it.

About the only thing that I can think that Bike Yoke didn’t do is make the dropper post lighter than the competition. Hell, I feel a little bad even brining it up, but it’s kind of pissing me off that I can’t find anything to fault. It doesn’t creak, squeak, or sag, there’s no discernible rotational play, it looks great and keeps my saddle from going up my ass on the craziest trails the Whistler valley has to offer. So yeah, a 31.6 x 185 mm post weights in at 693g including the remote, the full length of supplied housing and cable, and all the little odds and ends to make it work. That’s right in line with the competition. I stand defeated in my attempt to find really anything to bitch about.

So this is hardly a long term review, but we’re working on it. I’ll be putting miles on this post throughout the summer and will report back in a few months. I’m curious to see if the reset function remains as a welcome and occasional tune-up or becomes a daily chore. I’ll be keeping an eye on the smoothness of the remote and if any creaks or weird shit pops up, I will let ya’ll know. Keep an eye out for updates and the full review as the summer progresses.