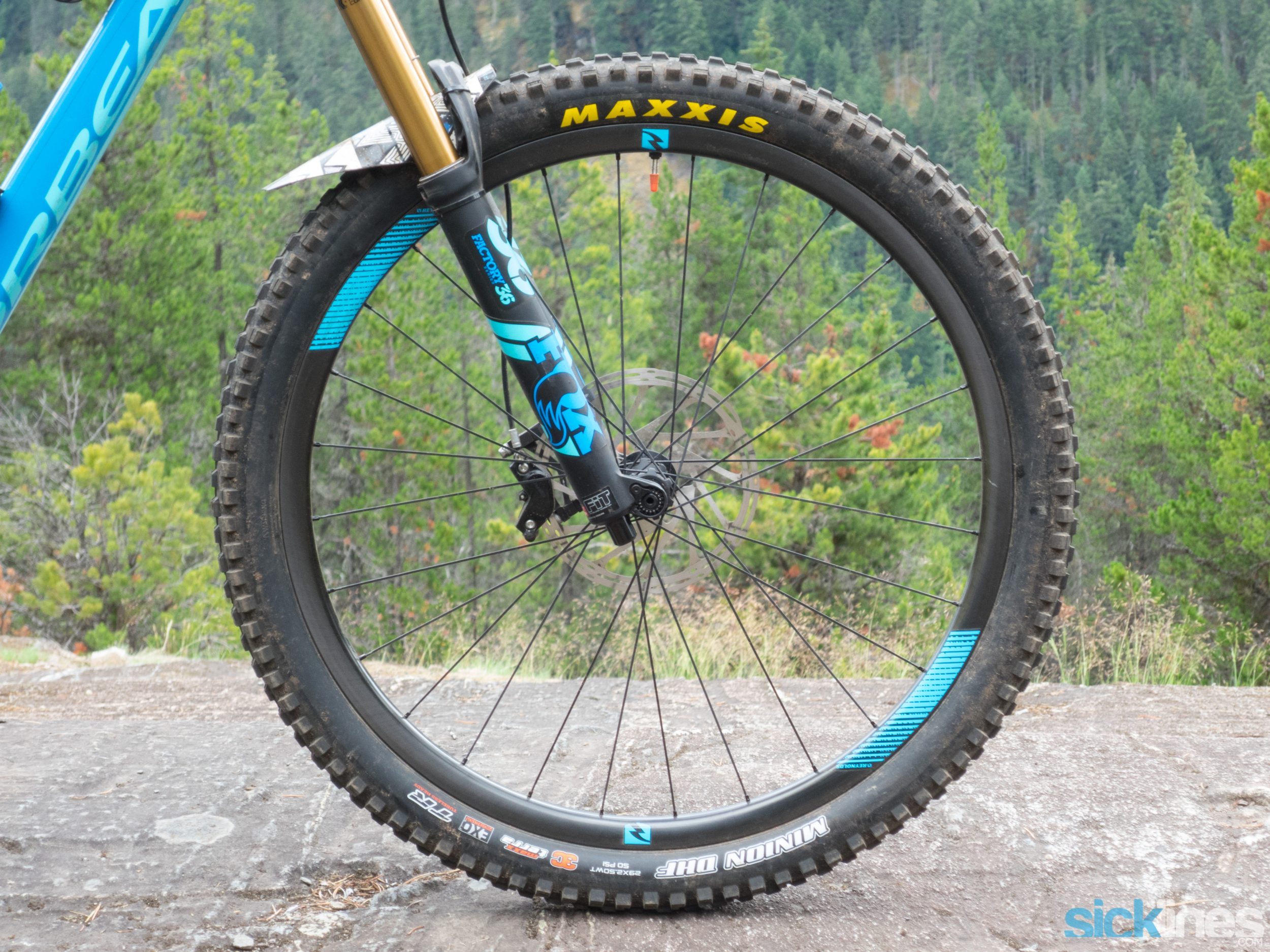 Same rim technology as their top tier Blacklable wheels in a more affordable package. Read on to find out how they stacked up…

A while back we put Reynold’s Blacklabel wheels to the test and I found them to be among the first carbon hoops I had tested that actually delivered on the promise of a better way to roll down the trail. That said, if I could point to a single shortcoming of the Blacklabels, it would be the $2500 cost. Add to that the proliferation of options in the $1000 to $1500 range and that leaves Blacklabels with their fancy I9 hubs a bit too spendy for a large chunk of the buying public. To address this gap Reynolds has released a line of wheels dubbed “TR S” which substantially improve the value proposition while maintaining most of the functionality of the Blacklabel line. The TR 309 S 29’er Mountain Wheelset that we’ve reviewed here carries an MSRP of almost $1000 less than the Blacklabels did back in 2016 at $1549. Reynolds hit the mark on both durability and ride characteristics with the Blacklabels and I was keen to see if they could maintain that performance in a carbon wheel set priced only a few hundred dollars higher than some alloy wheel sets.

So what do you give up? With the cost of these wheels coming in at almost a grand less than Reynolds’ previous offerings, some compromises are to be expected. Surprisingly, there’s very little lost. The TR 309 S Mountain wheels share the same rim construction methods as the Blacklabels but are offered in an internal width of 30 mm, up from 28 mm, to better suit 2.35″ to 2.6″ tires. They are still asymmetrical for even spoke tension and offered exclusively with 28 bladed spokes front and rear. The TR S line is also available in a variety of sizes, including the TR 249 S, TR 307 S, and TR 367 S which measure 29″ at 24 mm wide, 27.5″ at 30 mm wide, and 27.5″ at 36 mm wide respectively. What’s different is the hubs. In place of Industry 9 hubs, the TR S wheels are spec’d with a Reynolds branded hub.

What about those house brand hubs? This is where things get interesting. Many of us obsess as much about hub spec as rim spec when picking a set of high-end wheels. Usually this means picking a brand name hub. Reynolds has bet on performance over name and spec’d a house branded hub set in place of the I9’s spec’d on the Blacklabels. This is, no doubt, a major factor in bringing the price down and a bit of a gamble as even though the TR 309 S is well priced for a carbon wheel set, it’s still squarely in the high-end option category. That said, the Reynolds TR S hubs are really quite nicely designed. They are fully CNC machined with the rear featuring 6 pawls for super-quick 5 degrees of engagement. The rear hub internals feature tool-free access for quick servicing. Both boost and non-boost widths are available with either a SRAM XD or Shimano freehub body. All configurations of the TR S line run 28 straight pull spokes. So it seems like Reynolds did their homework and spec’d a really nice hub set. If I could nit pick, the rear hub seal is not particularly robust and after 2 months of riding the grease looked a little dirtier than I might have expected. That said, over the course of my testing I had zero issues with the hubs in terms of engagement or bearing reliability and as I box them up to send them back they spin like new.

The TR S hubs are offered only in center-lock rotor configuration but the included adapters allow for 6-bolt rotors to be mounted. I mounted up a set of Shimano Freeza center-lock rotors and found the machining tolerances of the splines to be very tight. No unwanted rotor play here. I tried out the 6-bolt adapters as well and as long as they were well torqued, they seemed to work as well as using splined rotors. One issue I ran into with the 6-bolt adapters is that they move the rotors a couple mm outboard which caused my 2-piece Hope rotors to contact my Fox 36 fork lowers. Since I didn’t feel like grinding on my fork lowers, I swapped back to 1-piece rotors with adapters and had no issues. I did also briefly test fit a set of proper centerlock 2-piece rotors (Shimano Freeza) and the clearance was fine so the issue seems to be constrained to 2-piece 6-bolt rotors.

The internal width of the TR S rims measures in at 30 mm which puts it in the sweet spot for tires in the 2.35 to 2.5″ range. Compared to a 28 mm rim, I was able to run slightly lower pressures (think 1-2 psi lower) with reduced tire roll and without burping. On the other hand, the 30 mm width is not so wide as to push the tire sidewall into harm’s way as long as you stick with high volume tires. Basically, they were a perfect match for the 2.5 DHF and 2.4 DHR tires I ran but a little too wide for a 2.3 Maxxis. The profile of a 2.5 DHF (shown below) is just about right in my opinion.

That all leads us to the traction discussion. Early carbon rims were just too damn stiff and were generally hell on traction. Things are better now and the flex pattern on the TR S wheel set is nothing shy of excellent for hard charging. I would describe them as mid-firm on the flex scale with enough support for faster riders but not punishing at lower speeds. I’d say the sweet spot for them is for advanced riders in roughly the 150-185 lb weight range or as a softer rim for heavier riders. Since I don’t have any way to simulate myself or my riding style at 125 lbs, I can only guess that they might feel a bit firm but probably doable for lighter riders. Really, don’t get too caught up in those estimates, I’m just trying to give a ballpark rough guideline and you might be a hell of a lot faster than me at 225 lbs and love them. For me, personally, the flex pattern resulted in forgiveness when trying to hold a line through loose, low traction conditions without feeling like noodles on high G bike park jump lines. I love me some cuttys, bonks, and generally slashing about. The TR S wheels hit the mark for my playful style of riding and kept me hooked up in the deepest summer dust.

The flex pattern is good but still, I have zero interest in wheels that feel great but won’t hold up to abuse. With that in mind, I didn’t hold back. Over 2 months of testing, I racked up about 15 days in the Whistler Bike Park and countless miles outside of the park. It’s astonishing that they came away unscathed. I ran a DHF EXO 2.5 front and a DHR II EXO 2.4 rear. Yeah, that’s right, single ply’s in the bike park. I didn’t even run any sort of tire insert, just EXO casing tires and a bit of Stans sealant. I didn’t cheat with high pressures either, I ran 24 psi front and 26 psi rear in the bike park and 22 psi front, 23 psi rear outside the park. That rear wheel, it hit a LOT of rocks. Mobbing down In Deep or hucking to flat in Squamish, there wasn’t much there to protect these rims. They took it. They just took it all. Does that mean you can’t break one? Nah. But, I’ve seen them survive enough hits to feel confident that they’ll hold up just fine for most riders. Aside from the rims, the hubs and spokes held up just fine over the past 2 months of the testing, nothing really to report there.

So what’s not to like? They come with a lifetime warranty and a 30 day money back guarantee, so there’s not much risk involved. At just under 800g front and right around 900g rear, they’re light enough to pedal all day and we’ve well established that they’re plenty strong. The width is right on target for the tires most of us are running these days. The only concern in my mind is the uncertainty around the house brand hub set. There’s nothing about the rear hub design that stands out as likely to be problematic but it is a question worth asking. Beyond that, the TR309S are competitively priced, coming in within a few dollars of MSRP on some of the best value wheels out there. Reynolds even includes 6 decal color options to dial in the look. Overall, I’m more impressed with the TR S line of wheels than I was with the Blacklabels and if you’re in the market for a set of carbon hoops, I highly recommend you take a look at the Reynolds TR S Mountain lineup.