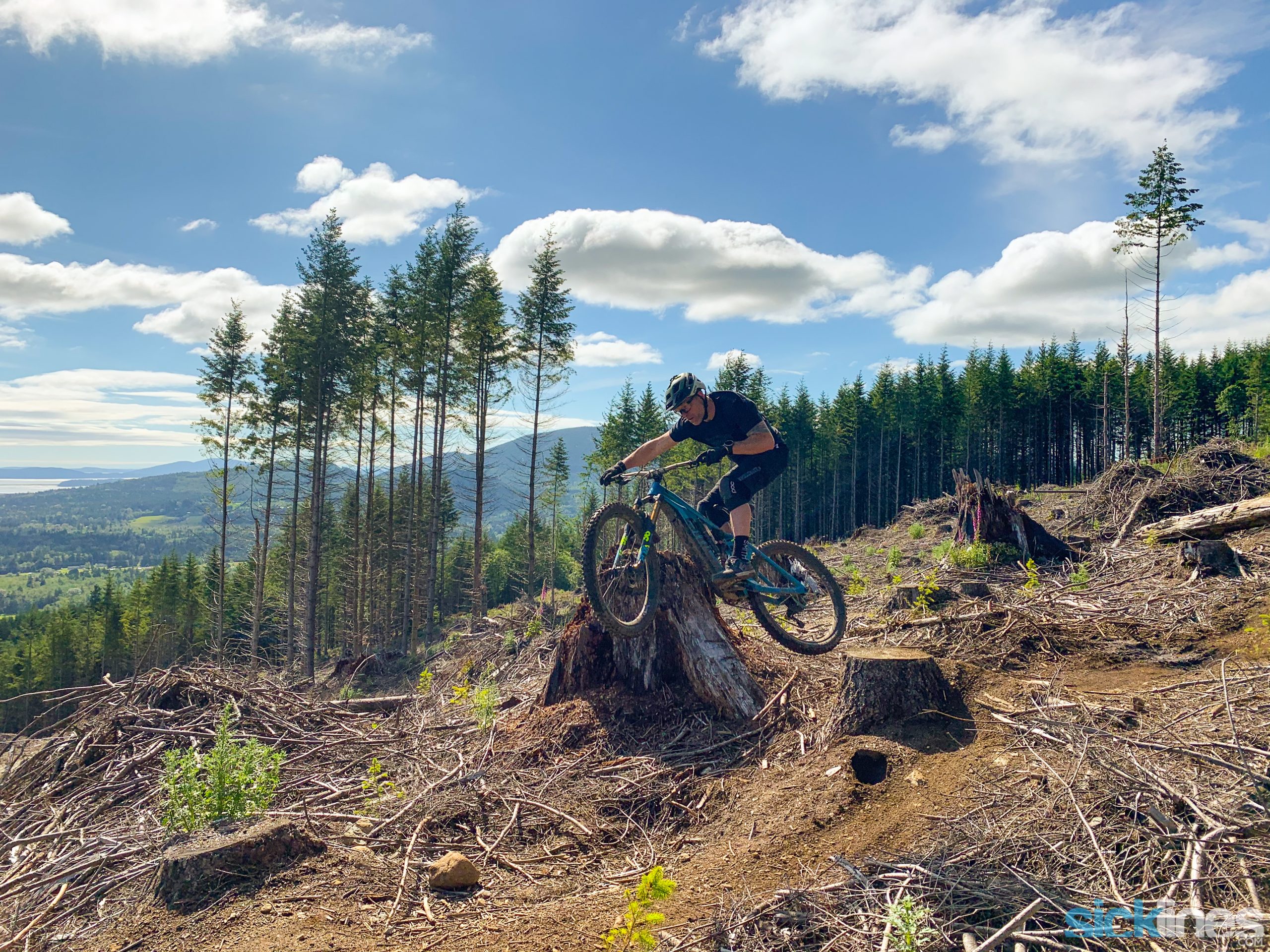 The Trailfox AMP SX is BMC’s take on an all-mountain capable e-bike.   The  AMP SX features a carbon front triangle with a neatly integrated 500wh  battery and internal cable routing achieving a clean and refined look. With 150 mm travel in the rear mated to a 170 mm Fox 36 fork, fat 2.5″ DH casing rubber, and powered by a Shimano STEPS 8000 motor, the AMP SX is squarely aimed at the downhill oriented rider looking for a self -shuttle machine.   I just spent the past year wandering all over the mountains of the PNW to bring you the full scoop on one of the first of what has since become a fairly large field of e-bikes now targeting the modern enduro rider. 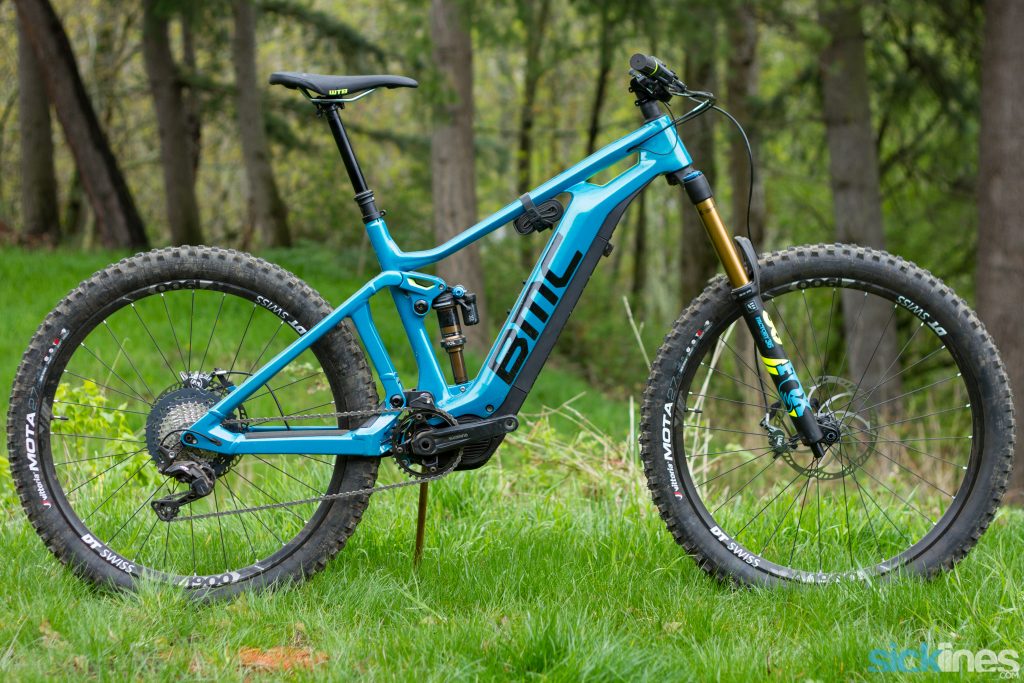 Up front, the Trailfox AMP SX is suspended by Fox’s top level Float 36 Factory edition featuring Kashima coating, and the Grip 2 damper in a reinforced e-bike specific chassis.  Set at 170 mm travel, the Fox is poised to tackle the roughest all mountain terrain.   The head angle has been relaxed from 65º, a degree slacker than the non-SX version of the AMP.  The massive 27.5 x 2.5 Vittoria Mota DH tires mounted to 35 mm wide DT Swiss H1900 wheels give away this e-bike’s gravity oriented intentions. 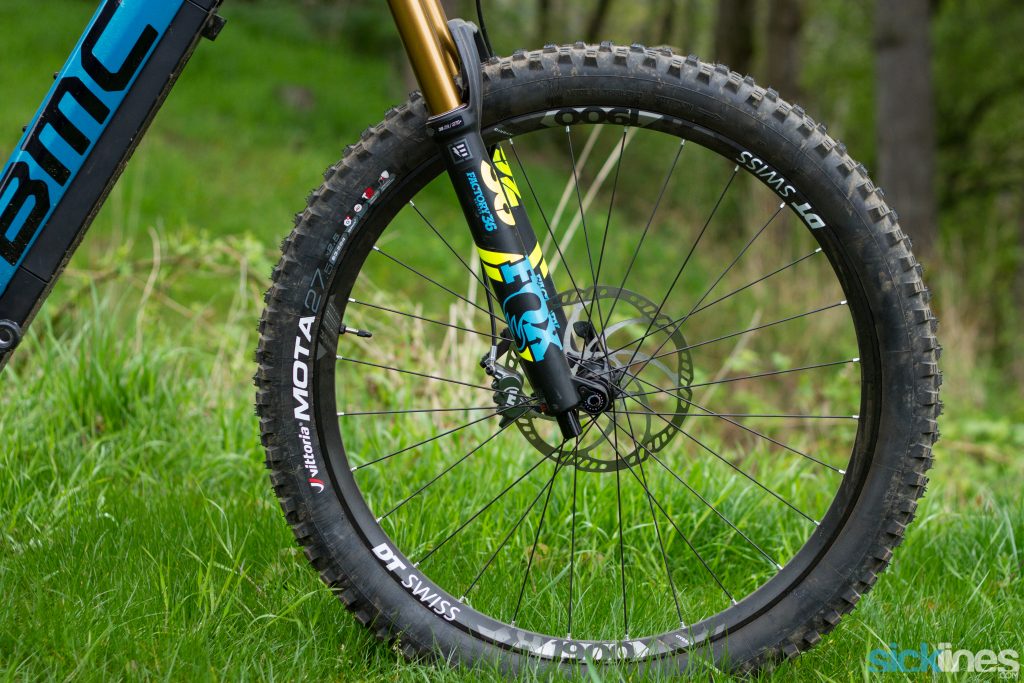 BMC managed to find clearance  for big tires and still keep the chainstays to a tidy 447 mm (17.5″).  While not considered short by analog bike standards,  when mated to the 70 Nm of torque the Shimano motor produces, they make for a nimble, snappy ride. Lofting the front tire is absolutely effortless (even when that’s not a good thing) and slotting into corners is surprisingly similar to a non-pedal-assist bike.  BMC has notably done a great job in designing rubberized chainstay protectors that actually cover the entire chainstay. I’m no fan of routing cables inside of the rear triangle, especially the rear derailleur cable but it does all add up to a highly refined look. 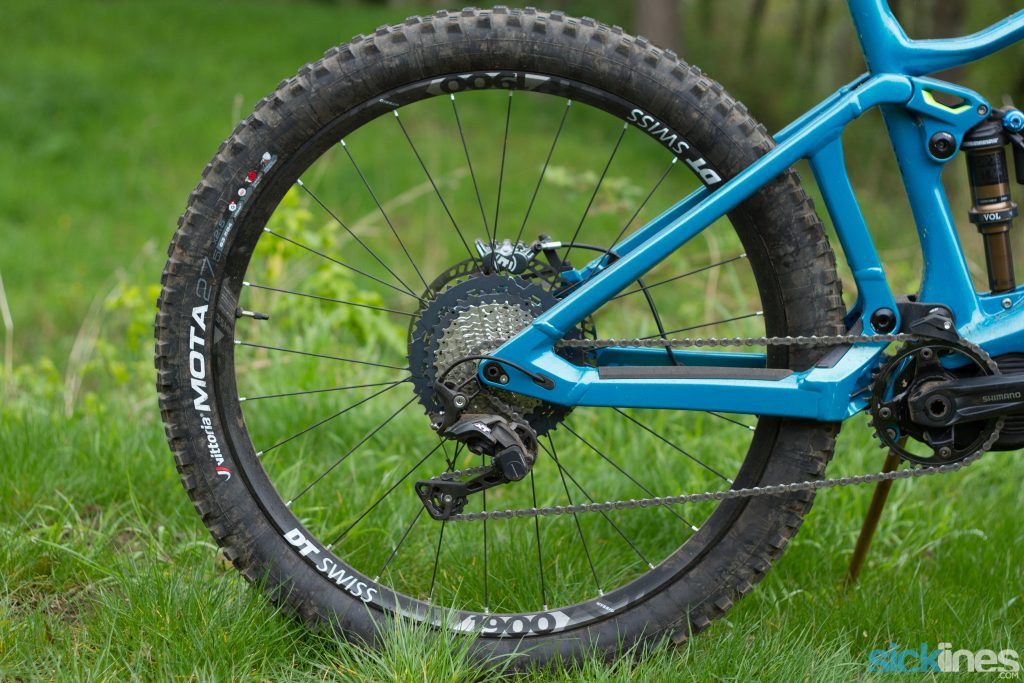 The now rather ubiquitous Shimano STEPS 8000 motor produces 250 W of  power and 70 Nm of torque.  The Shimano cranks are spec’d at 165 mm to help keep pedal strikes under control. Personally, I’d like them even shorter to further reduce pedal strikes.  A top mount chain guide is standard but there’s no bash guard or glide plate so chainring to obstacle contact is frequent. 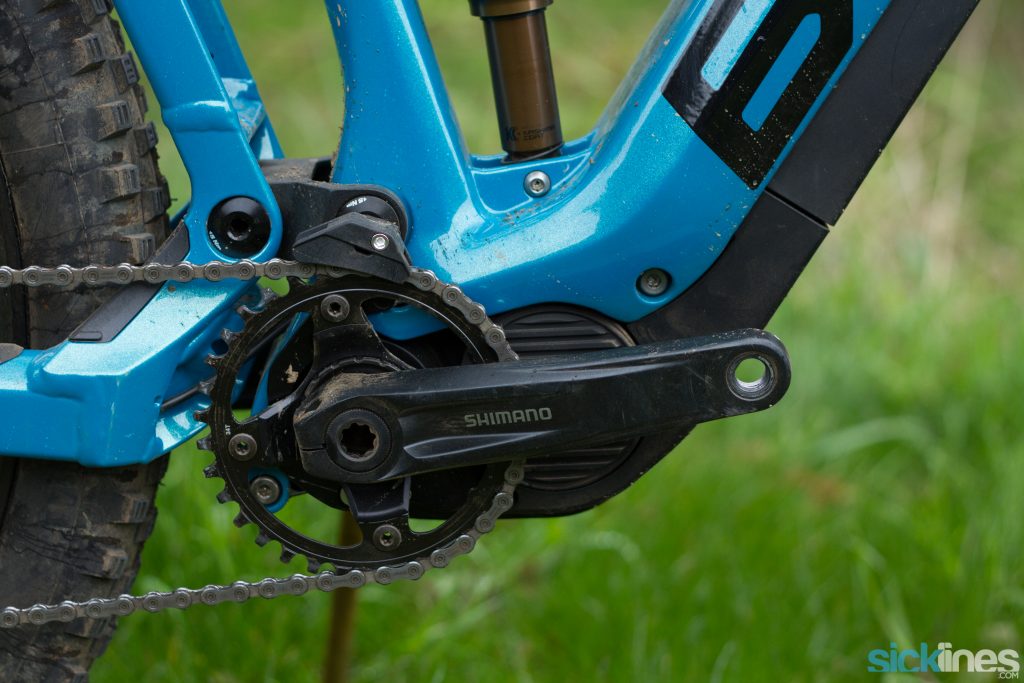 The AMP SX employs BMC’s now familiar APS rear linkage but with an e-bike specific tune that is much more active than you’d find on an analog bike.   The 150 mm of  rear suspension travel in controlled by a Fox DPX-2 damper which, while a great option for more trail oriented rides, seems a little out of place on a bike with a gravity focus. 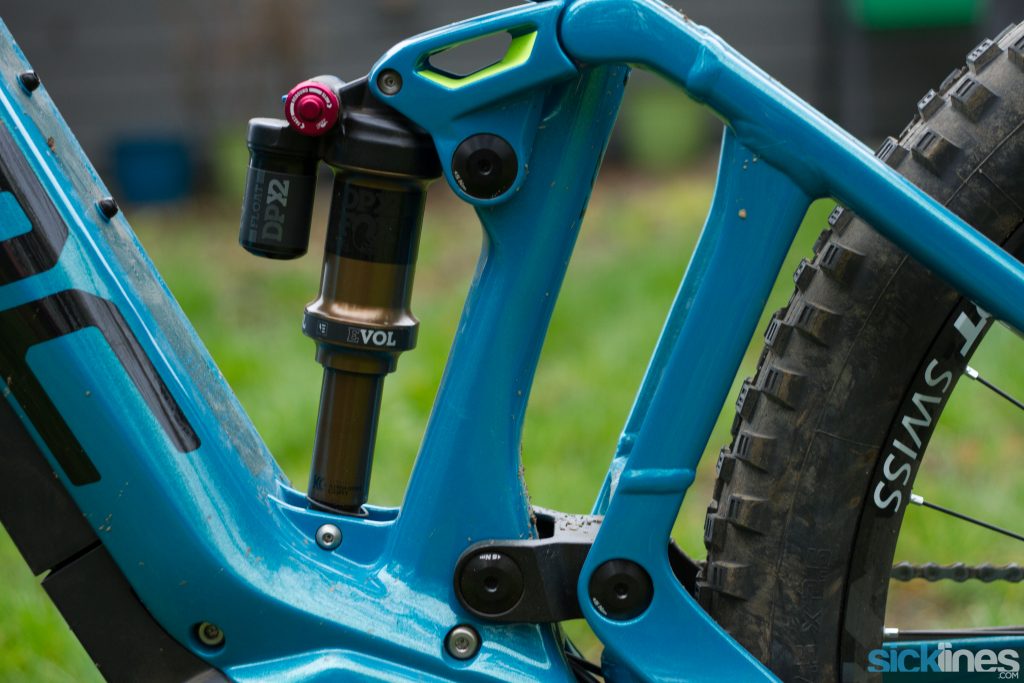 BMC went with an integrated 500 WH battery tucked into the downtube.  No one is going to mistake the AMP SX for an analog bike but the appearance is nice and clean.  The on-off switch and charge port are on the underside of the down-tube and are both a little fiddly, but get the job done.

Yeah, that’s a mess of cables and I can’t help but wonder how that aspect of e-bike design will evolve in the years to come.  Beyond that, BMC nailed the cockpit spec with an 800 mm Rental Fatbar 20 mm rise and a 40 mm Rental Apex stem.  The grips are house brand but are thin and tacky and I had no complaints.  The Shimano STEPS display tucks in nice and neat and has  survived several crashes without any damage.

Cockpit real estate gets crowded trying to fit the Shimano motor remote, the Fox Transfer dropper remote and the Magura brakes.  Below is the best orientation I could come up with but it always felt a little clunky.  If this were my personal bike, I would most likely experiment with aftermarket dropper post levers to find a more natural arrangement. 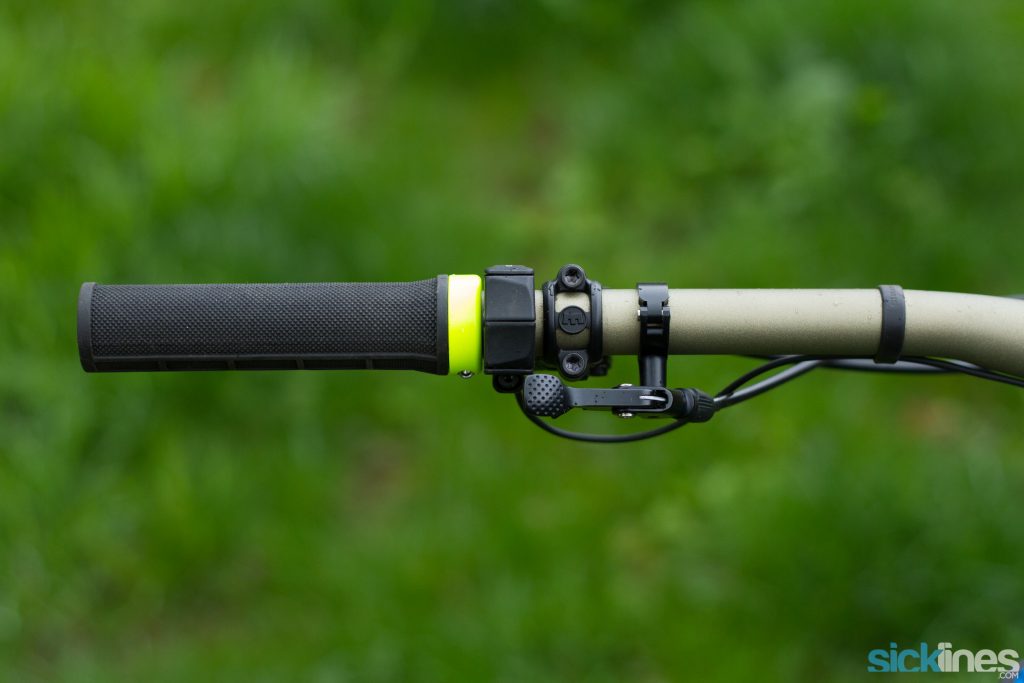 The drivetrain is all Shimano with an 11 speed XT setup.  This bike, being a 2019 spec does not benefit from the new gen 12 speed Shimano drivetrain which is absolutely brilliant. That said, the 11 speed setup gets the job done, particularly when shifting under high-power which is inevitable with an e-bike.  The Magura MT7 brakes are spec’d with 200 mm rotors at both ends and provide massive stopping power. 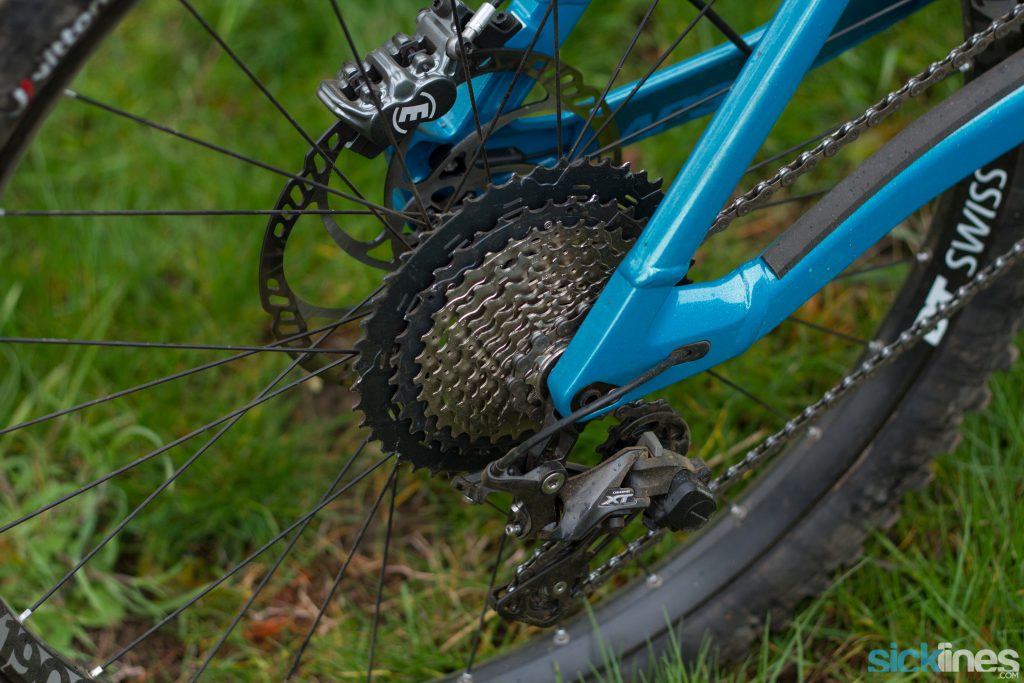 If you’re new to e-bikes, I need to point out that climbing on an e-bike is a completely different experience than you’re used to.  Obviously, it’s easier to pedal up steep grades with a motor assist, but more importantly, the motor opens up options to ride up trails and over obstacles that you’d probably not consider on an analog bike.  The high-traction tune of BMC’s APS suspension combined with the massive Vittoria tires puts the power down with authority.  I found myself seeking out technical dirt bike trails and having a blast trying to find the limits of what is climbable. The short’ish chainstays and slack by modern standards, 74º seat angle limit how steep you can go before you loop out but with some body english, I found myself getting up some pretty interesting lines.  In terms of battery power, the big tires and heavy duty components eat up the juice but I still managed 4000 – 4500′ vertical over 20+ miles on a charge except on the coldest days as long as I stuck primarily to eco mode.  On one notably big ride that approached the 40 mile mark, I climbed about 1000 vertical with the motor switched off.  Spinning the cranks of a 52 pound e-bike without motor assist, is, um, character developing. 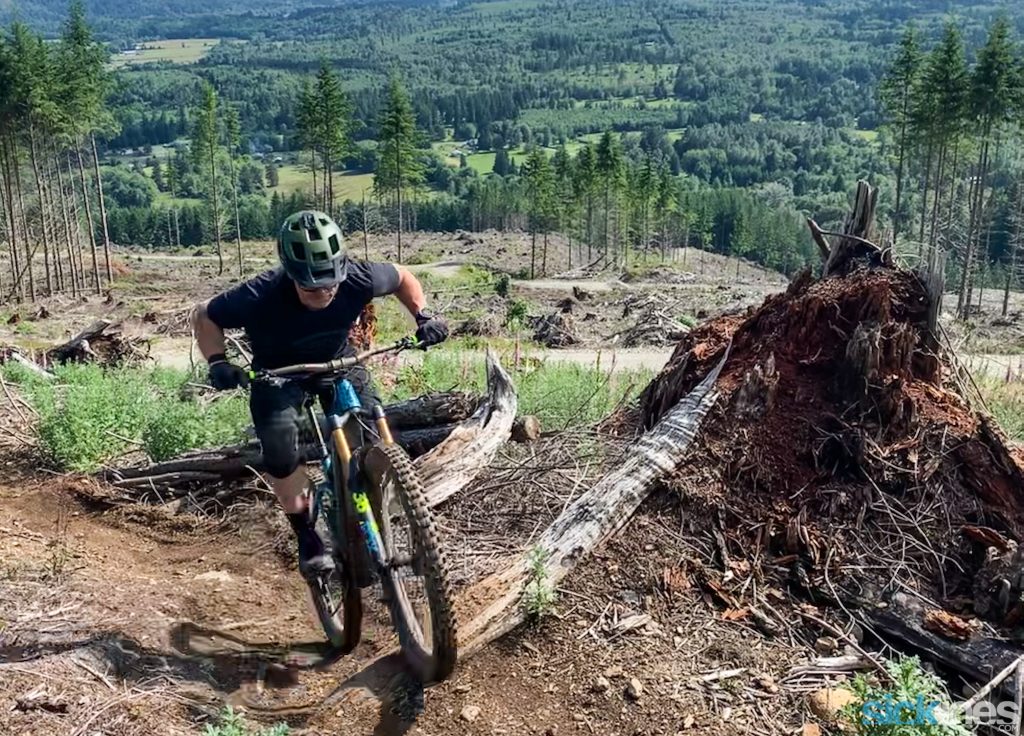 Cornering and overall bike handling of the 52 lb beast is at times quite awkward and at other times completely natural.  Low speed maneuvers that require bunny hopping or lifting the bike where it’s tricky or impossible to leverage the motor take a lot of energy.  There is no hiding that some things are actually harder on an e-bike.  On the other hand, the weight sits low in the frame and and once the bike is up to speed, jumps and corners feel fairly natural.  The Magura MT7 brakes are absolutely the most powerful stoppers I’ve tried, notably more powerful than my go-to Hope V4’s.  They do a great job of hauling the mass of the AMP SX to a stop but lack feedback and make it challenging to avoid unintentional lock-up. 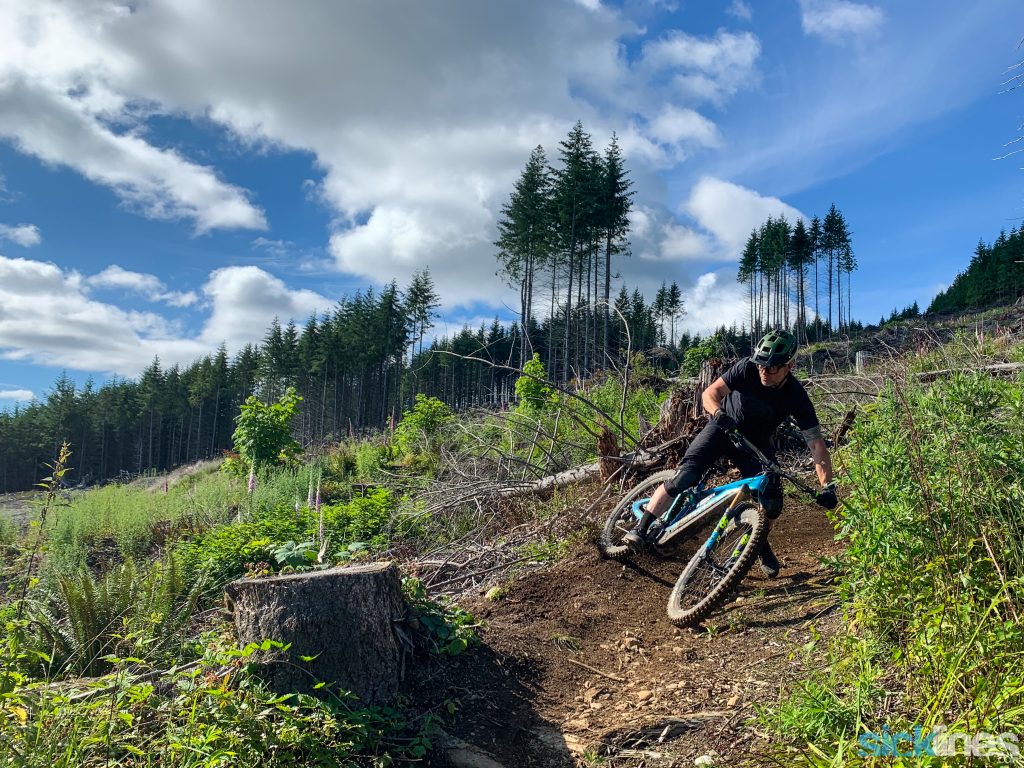 Being a gravity oriented e-bike, it comes as no surprise the BMC feels completely natural in the air.  The reach on the size medium I tested measures up quite a bit shorter than most bikes I’ve ridden recently, at 437  mm.  Between that and the 447 mm chainstays, the AMP SX has a decidedly playful feel and is right at home slapping berms and boosting every hit on the trail whether it be a polished lip or a well placed root gap.  It can not be overstated how much fun it is to go out and rip jump line laps on rapid repeat with no need for a shuttle vehicle or chair lift. 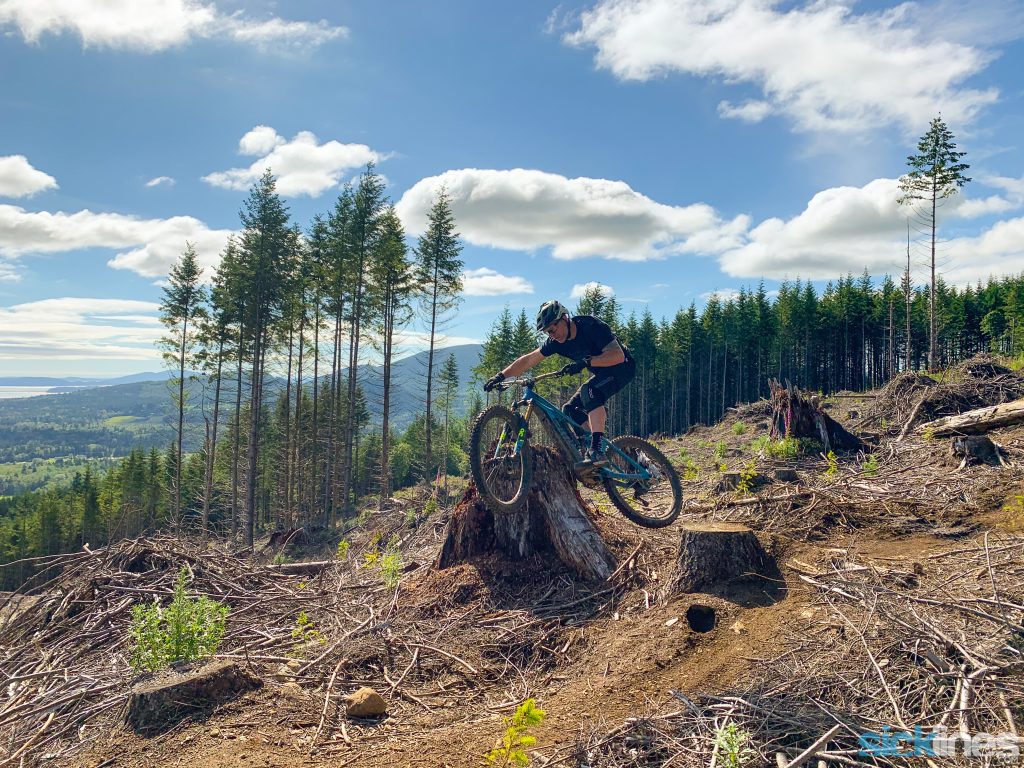 Straight up DH on the AMP SX is quite fun but despite it’s DH casing tires and downhill oriented parts spec there’s no hiding the fact that it’s far more of a play bike than an all-out speed machine.  The AMP SX prefers to bounce and play rather than pin-it-to-win-it.  I fiddled with suspension and tire pressures to see if I could get it to settle down a bit and while the Float 36 is more than willing, the DPX-2 shows it’s limitations at speed.  Personally, I’m not put off by this. The AMP SX does a great job balancing nimbleness with outright descending capability and will appeal to those with more interest in air time than Strava times. In terms of handling the biggest hits, there’s not a lot of ramp up at the end of the shock stroke, so with the damper set to around 25-28% sag, I found myself using full travel on every ride with the occasional firm bottom-out when sending it to flat. I’m really curious what this chassis would be capable of with a Float X2 and a few volume spacers. 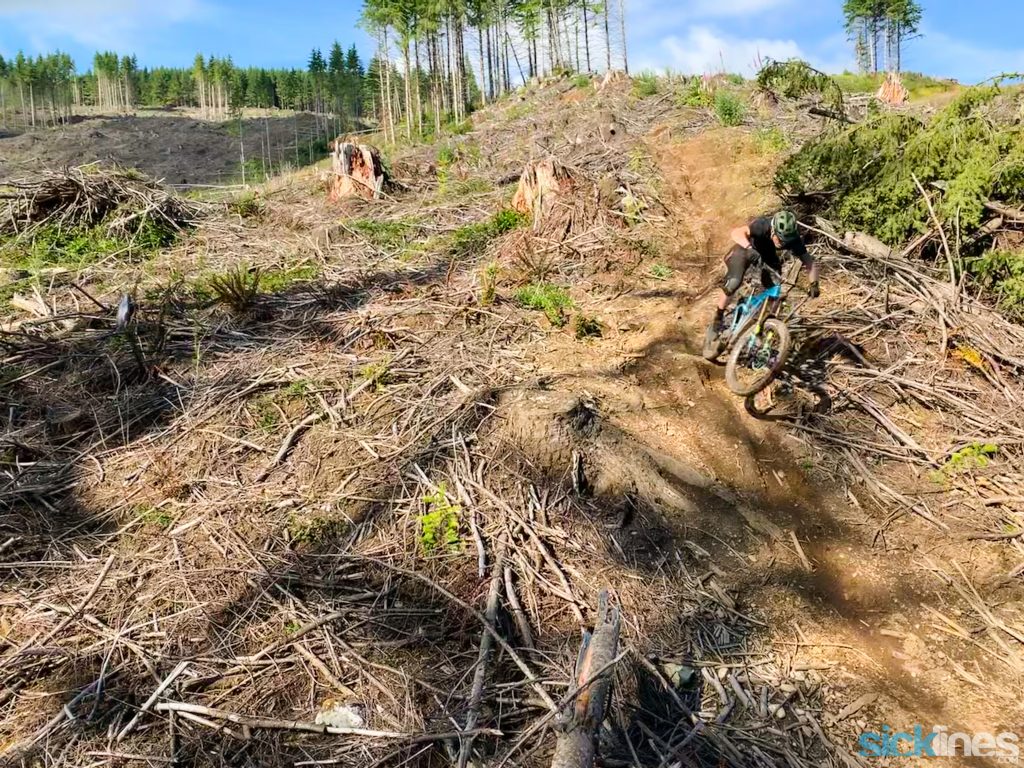 I put quite a few miles on the Trailfox AMP SX over the course of a year and had a lot fun doing it.  I still ride my analog bike more, but I can clearly see the appeal of the e-bike.  Exploring seldom ridden trails and working out big loops that I might never have tried on my regular bike has probably been my favorite aspect of the e-bike.  My qualms with the BMC were all fairly minor and I’ve had zero reliability issues.  At just over a year old now, any degradation in battery life is hardly detectable nor has any other e-component failed me.  The biggest risk in the e-bike plunge is that both e-bike technology and supporting design concepts are evolving rapidly.  That said, we’re to the point now where bikes like this are super fun and extremely capable and I wouldn’t hesitate to pick one up.  For 2020, BMC is no longer offering this exact component spec but there are two versions of the Trailfox AMP based on the same frame and motor package.  As of now, a quick Google search revealed a few remaining 2019 AMP SX’s available around the web that can probably be had for a great deal. 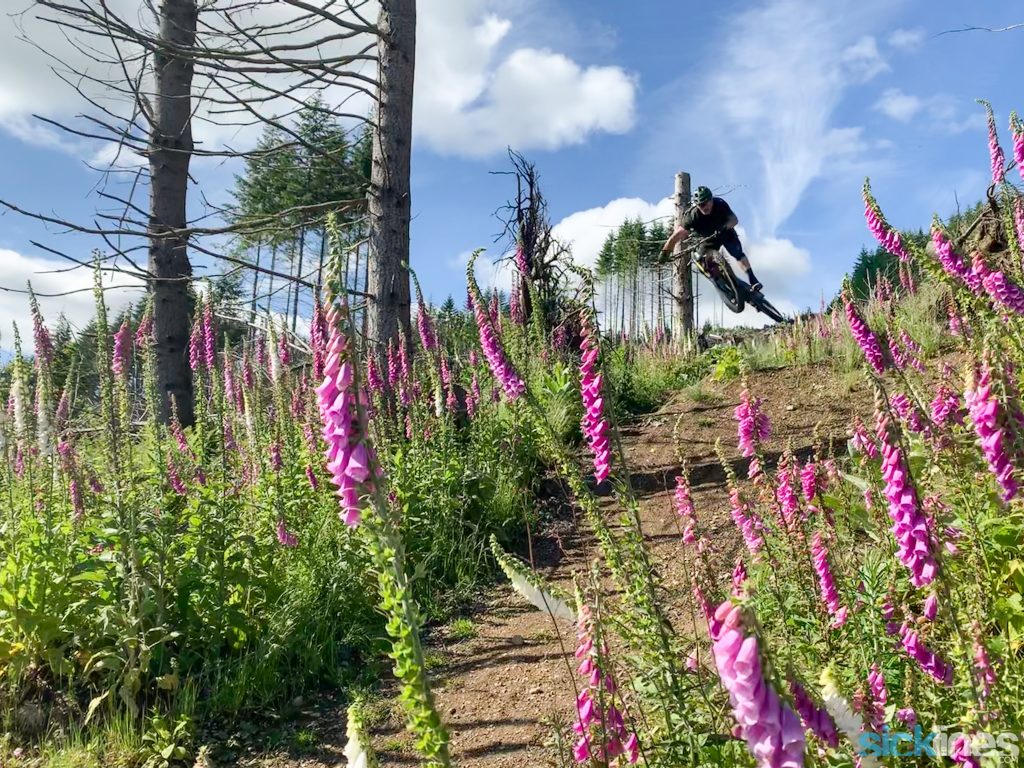 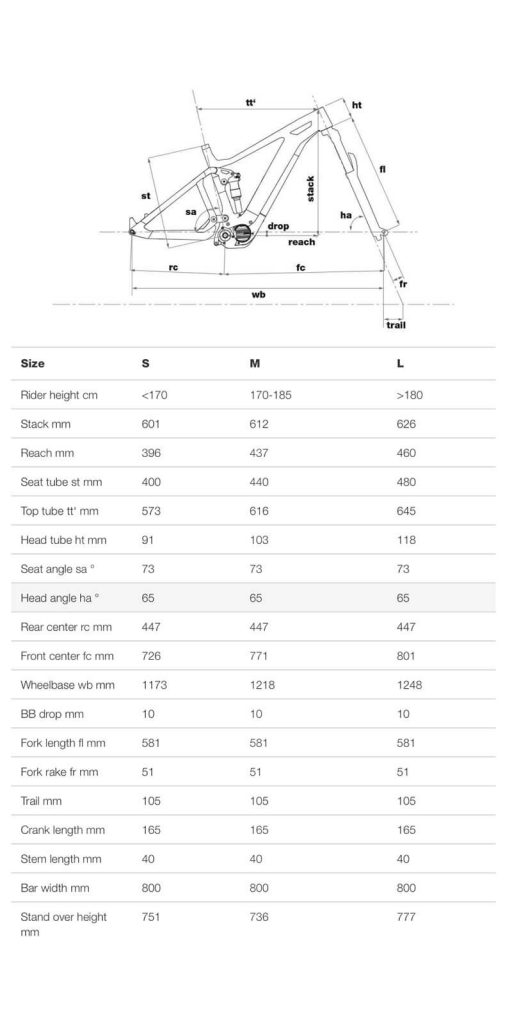