During the launch of the 2015 Demo we chatted with Aaron Gwin about his bike setup for a little bit. Learn about how he has his bike setup and his thoughts on tubeless, geometry, and more. Inside we also snapped a few pictures of Troy Brosnan’s bike setup as well.

Below you can see some shots of Aaron Gwin’s S-Works Demo that he’s racing on this weekend in Meribel. Gwin has been running tubeless for some time now and his famous run at Leogang was a must-see event. He typically runs between 28-32psi now in this tires. Learn more about his thoughts on the bigger wheel size and more in the video above.

Gwin is sponsored by FOX and has some RAD suspension outfitted on his bike.

ODI has some signature Gwin grips coming out and Gwin seems to really love them. They’re quite thin in comparison to most lock-ons on the market currently so if you like this style of grip be on the lookout for this one as it feels great.

Gwin runs HT clipless pedals and they look quite tidy with some traction pins added to the main body.  Look for these in 2015.

Renthal makes a clean stem and bar combination. Gwin and Brosnan are running a full Renthal bar/stem combo as well as their chainring.

SRAM released their X01 DH gruppo earlier this year and we’re a fan of this system. 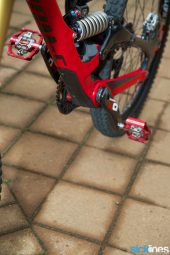 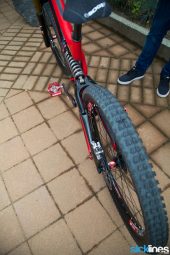