The Leogang World Cup illustrated that there’s a new crop of capable riders that can win on any given weekend. Inside you can see some detailed shots from the race weekend. It was a great race that had us excited the entire time and this is one race that won’t be quickly forgotten. 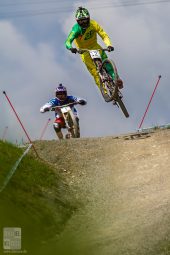 The forth stop of the 2014 UCI World Cup downhill is in the books. Similar to last weekend when Troy Brosnan won his first UCI World Cup, Josh Bryceland  has done the same.  The stage was set for a great race as Loic Bruni took the top qualifying spot, Aaron Gwin took 2nd in qualifying, and Josh Bryceland rounded out 3rd ahead of race day.

The Santa Cruz Syndicate couldn’t have been more pleased with the 1-2 combo they were able to achieve this weekend. Greg Minnaar is always a threat on race day and he’s a rider who knows how to elevate his game when it is needed. It’s why he’s been able to remain on top of the sport for so long. It has been a long time coming for Josh as he has show many times throughout the years that he’s capable of taking a World Cup win.  A pedal slip here, a crash, or untimely mechanical have all caused Josh to be off of the top of the box until now.

Steve Peat has been a mentor to many racers and Josh Bryceland has certainly learned a thing or two from his tutelage. Peat couldn’t have been more proud of Josh’s first UCI WC DH win.

Sam Hill has been showing great form this year. He has had his fair share of injuries and it’s nice to see him contending for the top spot on the podium again.

Troy Brosnan has had some bad luck at Leogang to say the least in the past. It has taken him out twice in the last two years (2012 IXS CUP and World Champs 2013). This year however he would get the better of Leogang and took 3rd position. With his result and team mate Aaron Gwin’s untimely mechanical puts Troy Brosnan in the leader’s jersey with 634 points headed into Mont Sainte Anne.  Aaron Gwin takes the #2 spot overall with 605 points and Brycleand rounds out 3rd overall with 547.

Aaron Gwin still rallied his Demo 8 down the hill as if his rear tire was still beaded to the rim. The tubeless verdict is clearly still out for many riders and wheel systems when it comes to downhill applications. Many riders have had success with tubeless this year and but there’s been quite a few failures as well. Systems like Schwalbe’s Dual Chamber system are being tested and proven out more and more to give riders a competitive advantage in these races as every small advantage helps.

Eric Carter (EC) has been instrumental in coaching the Specialized team this year. He’s quite elated with the success they’ve had.

There are lots of prototype shocks and product development going on at the World Cup races. If you’re paying attention you’ve no doubt seen some new products that are being vetted at this top level.

Rachel Atherton hasn’t been feeling well during these past few World Cup’s. She has been quite sick in general which has affected her ability to perform at these recent World Cup’s.  She was able to secure second place at Leogang even with this setback.

Manon Caprenter has been nipping at the heels of Rachel Atherton for some time now. Manon would go on to win this weekend after suffering a mechanical last weeked at Ft. William.

Myriam Nicole is always a threat on challenging courses and she did well here this weekend along with Tahnee Seagrave who took her first UCI World Cup podium in Elite Women.

Trek World Racing secured two podium positions at Leogang. Brooke MacDonald has been recovering from injuries/surgery and made a return to the podium at Leogang in 4th place. Teammate George Brannigan took 5th place.

After seeding in 4th place, Andrew Neethling was looking to get on the podium.  He’s had some struggles at Leogang in the past but he was able to secure 8th this year.

It’s a hard job maintaining downhill world cup bikes. Having a digital shock pump and a good selection of tools comes in quite handy even if you need stickers to rebrand some of them.

The next stop is the iconic Monte Sainte Anne on July 31st weekend. With only 3 rounds remaining in the UCI World Cup downhill calender this year it will be a battle to the end based for the races.

Be sure to check out the practice day post for more photos as well as the full results and live replay.