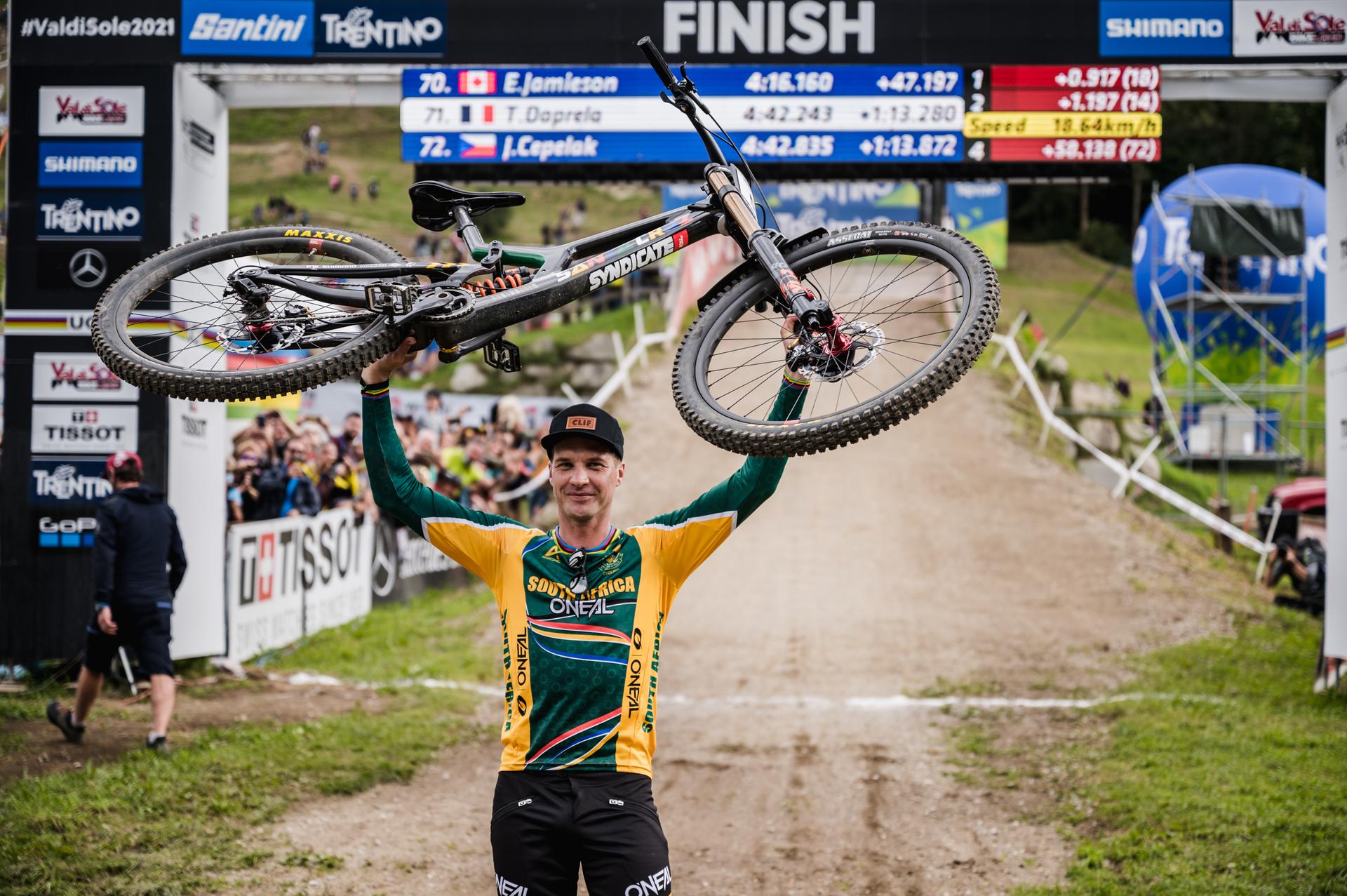 At almost 40 years of age, the greatest Downhill rider of all time finally owned the Black Snake, winning his fourth rainbow jersey. After Nino Schurter, another giant of the MTB sport left his mark on an unforgettable edition of the World Championships. French Myriam Nicole secured her second World title, Goldstone and Jankova celebrate among Juniors

A week of huge emotions in Val di Sole, the home of the UCI Mountain Bike World Championships 2021, ended in goosebumps in its final act, the anticipated Downhill challenge on the iconic Black Snake track on Sunday, August 29th.

After Nino Schurter‘s triumph in Cross Country, today it was Greg Minnaar‘s turn: for the second time in two days, Val di Sole crowned the greatest athlete in the history of the respective disciplines.

At almost 40 years of age (he will turn them on November 13th), the South African phenomenon has won his fourth World Championship, 8 years after the last, 18 years after the first, dated 2003.

Minnaar also broje his curse on the Black Snake, one of the few tracks in the world where he had never secured the top step of the podium.

The final descents and the party that followed created a momentum of collective emotion, with the large audience participating in the continuous twists and turns of a breathtaking race, on a track capable of thrilling, deceiving and disappointing like no other.

An emotion that also accompanied the Women’s Elite race, which also represented the closing of a circle: Val di Sole gave Frenchwoman Myriam Nicole her second world title (after Mont Sainte-Anne, 2019), on the same track that 10 years ago saw her claim the first World Cup success of a fantastic career. In the two Junior races, Canadian Jackson Goldstone and Bulgarian Izabela Jankova toasted to their first World Champion’s jerseys.

Greg Minnaar hadn’t won a World Championship for 8 years, but he never gave up. Those who had seen him train in Val di Sole in recent weeks were adamant: Greg can do it. The South African champion had tested lines, familiarized with the track, and had grown in confidence day after day.

“I knew a victory was possible,” said the South African, “I knew that by giving everything I could make a great run, but until the end you never know if it will be enough.”

Actually, the rider from Pietermaritzburg made his masterpiece in the lower part of the course, after passing at the second split over a second behind Frenchman Benoit Coulanges. From there, Minnaar found his flow, floating on stones and roots and drawing a perfect line in the last corners to complete the most sensational of comebacks. 3.28.963 was the time of the golden run, one that none of the French trio Bruni, Vergier and Daprela could scathe, with the latter even victim of two crashes on his run.

The second place went to a less-expected French rider, Benoit Coulanges (+0.227), who made a great run particularly in the middle section. Bronze went to Australian Troy Brosnan (+0.441). Three athletes in less than half a second after 2.100 meters of competition: that’s the wrap-up of a race to remember.

Brit Danny Hart stopped at the foot of the podium, while youngster Matt Walker completed the top-5. 2019 winner Laurie Greenland also was not on his day, as his run on his favorite track was affected by a crash in the early going.

With a fast and flawless run, Myriam Nicole has won her second Elite Women’s World title in Val di Sole. The French rider mastered the Black Snake, closing her run in 4.06.243 and inflicting big gaps to her rivals.

For Nicole, this World title comes after Mont Sainte-Anne 2019, and marks her second success in Val di Sole after 2011: it was her very first World Cup victory back then.

“When I won the World Championship in Mont Sainte-Anne, I didn’t have any pressure on me. This time I had a lot of pressure, and I’m stoked at how I managed to handle it, riding smooth and relaxed, especially in the central part. Last year I could wear the jersey for just one month, this time I want to enjoy it in full. Having won the World Championship here, where I took my first World Cup stage, on a track that is the essence of Downhill for me, really means a lot.”

Fellow French rider Marine Cabirou (+4.827) had to settle for the silver meda this timel: the winner in Val di Sole 2019 made a great run of her own, but proved less effective in the highest part of the course. Switzerland celebrated bronze with Camille Balanche (+6.099), on the World podium again after her silver in Leogang 2020.

Italy was hoping for Eleonora Farina to win a medal, but the 30-year old from Trentino suffered a severe blow to her left knee in a crash in the last training session before the race, and eventually ended in sixth due to a mistake caused by reduced mobility.

Austria’s Valentina Höll also left the race in disappointment: the youngster was making a great run when she crashed halfway through the course, spoiling the chances of a medal placement.

GOLDSTONE AND YANKOVA ON THE TOP OF THE WORLD AMONG JUNIORS

In the Junior competitions, Canada and Bulgaria took the biggest prizes. Jackson Goldstone won the men’s race with a time of 3.37.097. The Canadian raced at his best in the second half of the race, after passing third at the second split.

Behind him, Brit Jordan Williams (+1.812) and Australian Lachlan Stevens-McNab (+3.560) rounded out the podium. Seventh was Italian Davide Cappello, who had finished third in the qualifying round.

Bulgarian Izabela Yankova lived up to the predictions by dominating the women’s race in 4.30.865. Behind her, Norwegian Kine Haugom (+10.844) and Canadian Gracey Hemstreet (+13.245) stepped on the podium.

Val di Sole Tourist Board Director Fabio Sacco was certainly pleased with the unfolding of Val di Sole 2021 World Championships. “I wish to thank the sponsors, the partners, the organizational staff, the volunteers and all the people who contributed to the success of an event whose technical and media success is there for everyone to see.“

“The public could safely return to live a great sports event, thanks also to a considerable organizational effort, and the shots of our territory travelled around the world on the screen of fans and enthusiasts, along with the feats by the greatest mountain bike champions.“

“The feedback we are receiving from the International Cycling Union, from athletes and mtb insiders speak of #ValdiSole2021 as an event of absolute excellence: this makes us proud, and pushes us to insist on the path we have traced, and that is rewarding us more and more in time, both in terms of visitors’ presence and the positioning of the Val di Sole and Trentino destinations on the outdoor tourism market.“

“In a few days, we will get back to work towards our next goal, the Cyclocross World Cup in Vermiglio on December 11th and 12th, but we are already thinking way further, to the five year stint that will lead us to the UCI Mountain Bike World Championships of Val di Sole 2026: we will look to raise the bar once again.”