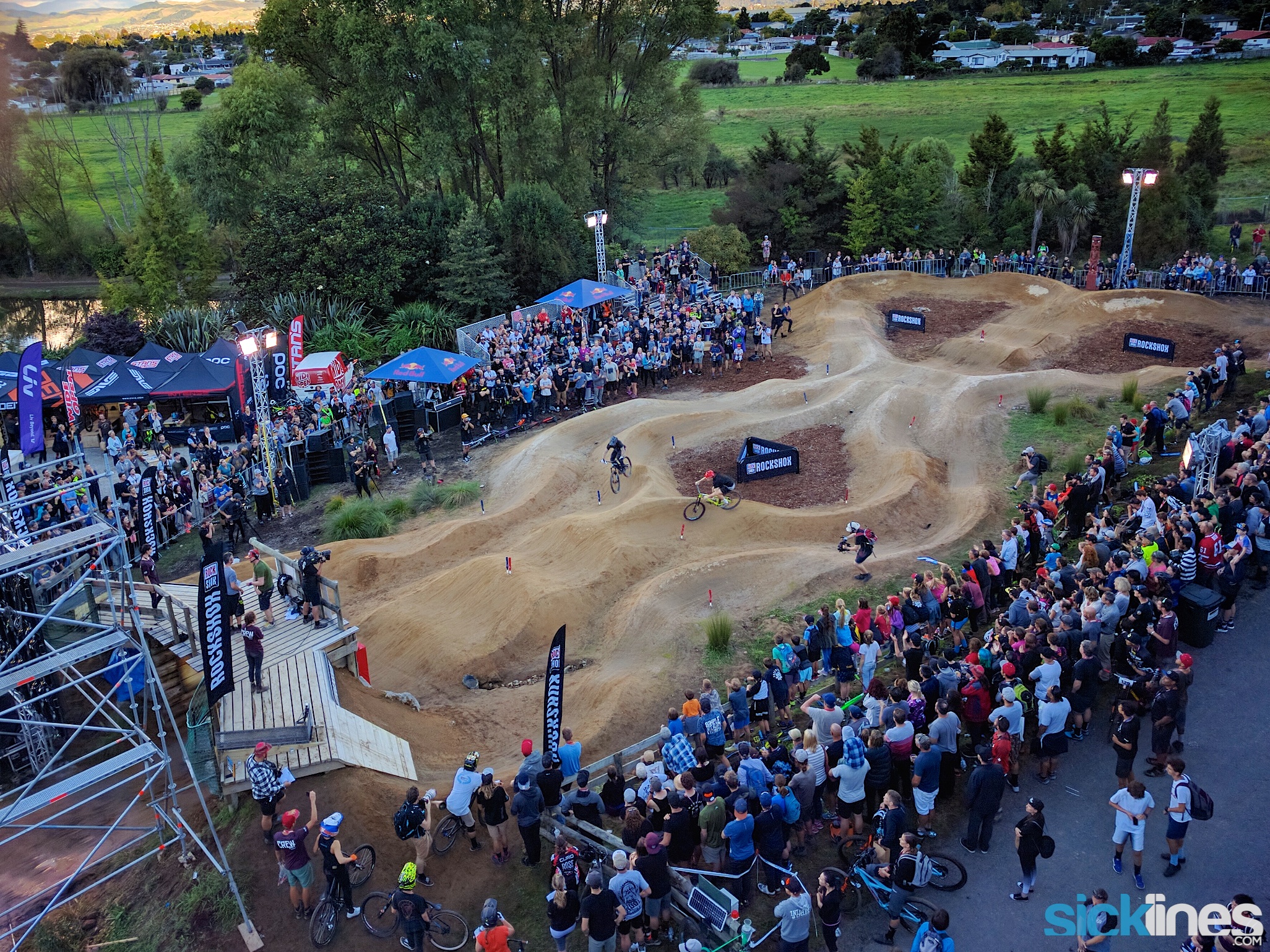 Due to the weather that rolled into Rotorua, the pumptrack race was rescheduled from Friday night to Thursday night. The racing was fast and full of excitement.

FOR IMMEDIATE RELEASE
Rotorua, NZ, Thursday, March 30 — A huge crowd-pleasing win for Olympian Caroline Buchanan will place the reigning Queen of Crankworx, Jill Kintner, on the back foot heading into 2017 and set the stage for an epic race for Queen.

Competing before a screaming gaggle of young Kiwi girls, who made their preference for Buchanan (AUS) known with the full rock-star treatment when she met up against Kintner (USA) in the finals, Buchanan had to close her eyes to focus.

This is only her second shared Crankworx podium with fiance Barry Nobles (USA), who pulled in for a solid third place, and Buchanan said she could feel the vibe reverberating around her, even having to go back to her BMX visualizations to maintain her concentration and seal the deal.

“I got out there and really had to commit to those back corners, which I think won it for me today,” she said.

Her race was, nevertheless, not without its bumps. She had to redo her semi-final run when a GIANT clappy banner on the course forced her to slow down. Fresh off her Olympic year, however, nothing seemed to throw her off as she won ladder after ladder, and she came back from this small upset fresh and fighting.

Having scored a four-year gold streak from 2010-2013, with a perfect hat-trick on top of the World Tour podiums last year, Kintner seemed almost pleased to have fresh blood to chase. In the final round she managed to beat Buchanan in the first heat, but lost after the second.

“I just kind of threw it away there,” she said. “I was trying to rip that turn super hard, and then I was just a little bit high in the soft stuff and that was it. I felt good in the first one. I knew I had her, just ‘cause that lane was slower, and I had a real good run. And then yeah, that was that. It was on me,” she said.

She wrapped up her interviews with a big smile saying: “Don’t think for one second that I’m going to accept this.”

Meanwhile, in the men’s race, the undefeated Pump Track World Tour Champion found himself scrambling at the last minute in Rotorua once more. This Rotorua Pump Track Challenge presented by RockShox course is one where Adrien Loron (FRA) can’t seem to catch a break, and he gave his latest opportunity to finally bring home a New Zealand win to local hero Keegan Wright (NZL).

“I’m feeling bad because I’ve never won this one and I thought I did really good tonight,” said Loron, with an affable, if slightly defeated smile.

The loss will by no means crimp his ability to clinch a third Pump Track World Tour Championship. In addition to adding another opportunity to win to this year’s tour circuit, Crankworx Innsbruck, the Crankworx series only requires a rider to achieve the most points of any athlete competing in the tour to take victory. Loron achieved it last year with two second places and a fourth.

“I was doing well until the very last moment, and then I made such a small mistake,” he said, speaking from the sidelines after the event. “I did the biggest part of the job and sometimes it happens. But if it was going to happen, I’m really happy it was Keegan, being the local guy, who took the win.”

Wright, 20, had the crowd in his corner from the outset as he absolutely hammered down the line, time after time, chasing the win with an extra torque on the throttle in the final moments of the last lap.

“I just went out and had fun, and it turned out to be a good day. It’s even better being in front of the home crowd. So yeah, looking forward to the rest of the week,” said Wright, who is known for his easy-going manner.

The next round of the Pump Track World Tour Championships will shake out in Les Gets, France this June, but there will be plenty of action to come for Crankworx Rotorua, with both the Mons Royale Dual Speed & Style and the Official Oceania Whip-Off Championships presented by SPANK slated to run today (Friday 31-March). Dual Speed will be broadcast live.

A complete list of Rotorua Pump Track Challenge presented by RockShox results can be found on Crankworx.com