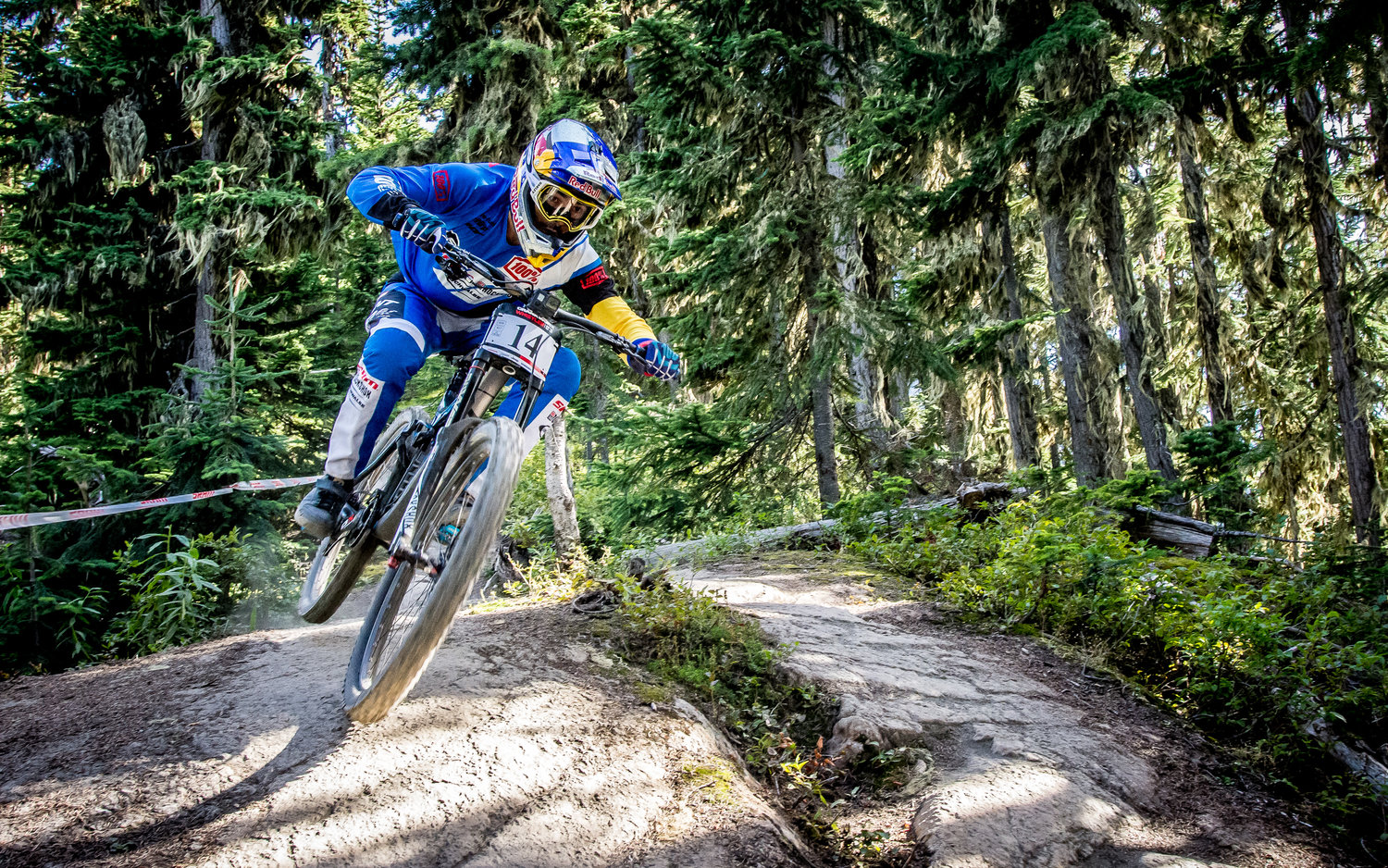 If you’ve rode the Garbonzo DH course, you understand how hard it is for riders to do well on. Marcelo wins again this year with a 12minute, 19.28second time with a snapped chain. Details inside from Crankworx.

FOR IMMEDIATE RELEASE
Tuesday, August 16, WHISTLER, BC — There is no question Marcelo Guitiérrez is the man of the moment at Crankworx Whistler where he pulled in a record fourth win in the Garbanzo DH Tuesday, even after snapping his chain.

The epic downhill course, in the Whistler Mountain Bike Park, boasts 1026 metres of vertical drop, or three times the 359 metres of descent of the other two downhill races for the 10-day, multi-disciplinary gravity fest—the Fox Air DH and Canadian Open DH presented by iXS.

With 130,000 people expected to come through Whistler for Crankworx, the atmosphere is likely to get headier moving toward the weekend, but Guitiérrez’s blistering-fast win on this monster of a course certainly had the crowd roaring.

“It’s big proof you should not give up,” Guitiérrez said, noting he lost his chain roughly three quarters of the way down. “I was like oh man, why this has to happen to me? Why this race when I was feeling good for it? When I was trying hard for it. So I just kept cruising. I was like Marcello, just don’t give up.”

Left to coast after each of the final drops, the Columbian downhill star bested his next competitor by an eight-second lead, bringing it home in 12:19.28 to New Zealand’s Sam Blenkinsop’s 12:27.18, and Australian Jack Moir’s 12:29.88. The rest of the pack trailed two and three seconds behind in succession.

After six days of hot, dry weather in Whistler the trails are running rough and drier than usual, but it didn’t stop Squamish local Miranda Miller from finally taking her first win on the infamous track, after dancing around the honour for seven years.

Miller is showing some of the best results of her career on the World Cup circuit. Pulling into the finish line with a 14:14.32 over top Australian rider Tracey Hannah, 14:16.61, and Whistler rider Claire Buchar’s 14:18.84, her lead was nevertheless not as strong as that of the men’s field.

“The race was good. It was maybe the hardest I remember. Every year it feels hard, but it was especially hard this year,” she said. “I felt, towards the bottom, I kind of was making some mistakes and stuff. So anytime I hit a mistake, I just told myself I should pedal harder to make it up.”

Miller acknowledged she and Buchar have a certain home turf advantage on the long complex track but, in truth, she has not been home to ride in Whistler for some time. Breaking the top ten in every race she’s entered this season, she’s currently got two World Cup third place finishes and a National Champion status to her name

Tuesday was a heavy day of practices at Crankworx, in addition to the main event downhill, and saw the first of the two cultural events, a video competition known as Dirt Diaries. Five athlete-videographers assemble teams to create an edit showcasing gravity-mountain biking, the winning edit for this year, from Dylan Forbes, telling the story of a mysterious force in the bike park making riders go missing.

“The winning video had the whole package. It had all of the components. Not only were the visuals awesome, but the sound edit was dialed, and it was unique, and fun, and something we haven’t seen before. It was fun, but it also kept us on the edge of our seats,” said Judge Matt Dennison.

Crankworx Whistler is one of three Crankworx festivals held around the world, and is now in its 14th year; it continues through Sunday, August 21, and hosts seven live broadcasts and will be shown globally both as a live show and in post-event extreme sports packages.

Tune in to the live races via Crankworx.com

Results for the Garbanzo DH: