Inside we’ve got more updates from Devinci and the 650b/27.5 bike that Steve Smith and Nick Beer raced in South Africa. Additionally we take a look at new products Gamut, a Bell Built Super limited helmet, and Morpheus Cycles.

During this past weekend’s world cup (and last year as well) the Devinci Global Racing Team chose to run a special bike. As Devinci has the capability to rapid-prototype bikes in their facility they chose to create a special bike for this race venue.

Featuring 650b tires / 27.5 the design takes cues from some of their other bikes in the lineup to suit the special South Africa track.

The bike uses a 216mm x 63mm (8.5 x 2.5″) shock and you can see influence from the Troy in the front triangle. Tapered headtube, split-pivot rear dropout, removable ISCG05 chainguide adapter, and more.

The rear end they beefed up from the frame they ran last year at South Africa. You can see all the structural support in the rear triangle that they’ve added. There is no plan to produce this bike at this time for the public.

Gamut had a variety of new products on display during Sea Otter. They’ve expanded their product range quite a bit from their usual chain guide & chain ring offerings.

New for this year are stems, bars, and some drivetrain pieces.

The new stem’s include options for gravity and traditional mountain bike that work for a wide variety of riders.

The Cillos was named after the street the Gamut guys grew up on. Available in a 40mm, 50mm, 60mm, 70mm and direct mount as well. Stem colors are black or grey.

The Cillos direct mount stem (and the 40mm) that are shown here are almost 100% ready and will look like the finished stems once completed. The Cillos DM stem offers 40mm, 45mm, and 55mm reach.

New for 2014 is the Gamut TTr ring. There’s quite a few companies offering this new tooth profile to help secure your chain for single ring applications and Gamut is throwing their hat in the ring as well.

Gamut’s SRAM adapter allows you to run a 104BCD chainring like the Gamut TTr on your XX1 / SRAM style cranks.

Gamut had some new guides on display as well. The Trail S is designed for the all-mountain rider but also capable for a weight conscious XC racer. Compatible with 1x drivetrains. These utilize a similar slider setup as their gravity focused chain guides and have a some quieting built into the design as well

To help reduce chain noise you can also notice they’ve tried to address this as well.  Often riders will put a small piece of rubber / mastic tape around areas where the chain contacts the chainguide to keep things quiet.

Trail SXC is a very lightweight option for racers looking for a 1x upper guide mount.

Both the SXC and Trail S guides have a slotted design that helps key the TPU with the backplate.

Bell had a mechanical Shark ride for the spectators to try out. Those with the best times were awarded a Bell helmet.

If you haven’t checked it out yet, be sure to cast your vote to get your favorite trail built. Learn more about the Bell Super helmet as well as it’s got some neat features like a removable GoPro mount, goggle compatible, and more.

Morpheus had their carbon downhill bike on display again in addition to their Vimana Slope and Vimana hardtail.

The Vimana Slope (V Slope for short) is designed with slopestyle in mind. Featuring 80mm of travel it is designed to work well in these environments to take the edge off of hard landings. Pricing is set at $1400 for the frame and comes in two sizes (regular or long). 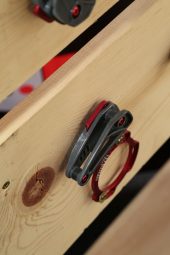 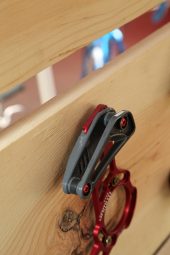 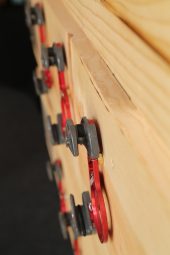 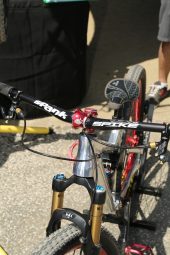 Stay tuned for more coverage on the 2014 Sea Otter Classic by keeping a tab on the tag or category we’ve created for this event.