We’ve been beating on a 2013 Zerode G2 for some time now. Inside we take a look at the 2013 Zerode G2 frameset and show you some of the details of the frameset in part 1 of our review of the Zerode G2.

In today’s downhill market it’s rare to see a frame offered without a traditional derailleur. Zerode refined their initial G1 gearbox bike over time and released the G2 early this year.  Both the G1 and the G2 features a gearbox style design by integrating a custom Shimano Alfine 8speed hub into the frame. The G2 saw a number of refinements including geometry tweaks, weight reductions (~300g), tubing updates, and more. We covered some the changes in an earlier article if you are keen to learn more on the changes in detail.

To say we were excited to build up a 2013 Zerode G2 would be an understatement. I’ve always wanted to ride a Zerode but the geometry chart of the G1 seemed a bit small for my tall nature so I held off.  The idea of a gearbox was intriguing to say the least and being able to shift without pedaling as well as not having to worry about a derailleur was quite appealing. The high-pivot design also suggested big bump eating performance as well which is certainly a good thing. With the Zerode G2 being offered in 3 sizes (S, M, L), I was quick to jump onto a large one to see what it was all about.

The Zerode G2 is a robust frame. Holding it in your hands it has clearly been designed to last. The tubing profile and linkages all are sturdy and solid. The frame assembled easily and all of the parts installed without any issue.

While the retail price ($3499) may seem high there are a lot of places where the rider saves money as there are fewer drivetrain parts to purchase (shifter, derailleur, chainguide / bash guard) that can easily offset the additional cost.

In addition to that, if you’re the type of person who breaks derailleurs a lot the Zerode can save you some money here as well since its design doesn’t have a derailleur hanging on the side of the frame.  To keep the drive-chain tensioned throughout the suspension cycle, a stock Alfine tensioner is used on the inside of the chainstay. The chances of damaging this is quite small given its location. Even if you were to somehow damage it, it’s a cheap piece to replace.  This sort of implementation is hard not to like.

The Zerode G2 (and the G1) rely on a custom Shimano Alfine 8-speed hub to handle the drivetrain’s shifting. The Alfine is a sealed system that houses internal gears.  Shifting the Alfine doesn’t require the pedals (or gear) to be moving so you can shift without pedaling as well. The gear-spread is pretty big but we didn’t seem to have any major issues with finding an adequate gear to either put the power down or climb back up the hill.

Most of the current gearbox equipped bicycle options don’t let you use trigger shifters as they utilize a Grip-Shift style shifter in most cases.  This is not the end of the world but I much prefer a trigger shifter especially on a downhill bike.

Adjusting the Alfine hub was a breeze and we haven’t had to really adjust the setup much since installation. The process of lining up the colored lines is pretty simple during inital setup. The shifter cable can be removed from the Alfine hub fairly easily once you know how things work.

The Zerode uses a two chain system to get the power down to the ground. In the manual, Zerode lists the exact length each chain needs to be for the 32t chainring / 21t cog setup. If you choose to run a different setup for some reason, it will require different length chains.

There is one chain that connects the rear wheel to the gearbox, and another chain from the chainring to the second ring on the gearbox.

The chain that attaches to the crankset is also able to be tensioned through the black adapters in the frame.  This takes up the slack in the chain and the Alfine.

Some gearbox bikes require a fixed-hub to drive the gearbox but the Zerode uses a traditional wheel setup that uses a standard cassette freehub with a single cog (21t) that is also supplied along with spacers. We found that using a high-engaging hub is ideal here to ensure power is put down to the ground quickly as the rear hub engagement does play into the power delivery.  The Mavic Deemax Ultimate engagement (48points) is quite good but the engagement with a Profile hub (204points) we found was even better.

The Alfine 8 speed hub sits just below the seat area.  Given the size of the Alfine hub, this area has to be wide enough to accommodate it.  Compared to most downhill bikes, this area has to be wider.  The clearance here was more than enough for our Shimano Zee cranks but its worth noting that the e.13 cranks we were told for example wouldn’t work here as they’re a bit too narrow .

The drivetrain setup calls for a 32t chainring.  Zerode requires cerain spacing and they include some spacers to make sure things line up properly with the gearbox. We’re not the biggest of fans of this implementation as the chainring sits on the spacers instead of the crankarm but we didn’t have any issues with it during our usage.

Like the G1, the G2 still utilizes a custom Shimano Alfine 8 speed hub but they now includes a custom
SRAM shifter to handle the shifting duties.

The custom SRAM shifer allows for multiple gear shifts at once whereas the Alfine shifter only allows for single shifts. In additon to that, it offers better ergonomics as well as improved integration with brakes and shifter placement.

Another key thing to note regarding the shifting is that it is reversed from what most would typically consider normal. To shift into a harder gear you push the big thumb lever and to shift into a smaller gear, you press the smaller lever. This is what most people may recall as ‘rapid rise’.

The Zerode comes with a shock bash-guard that is designed to protect the shock and the lower downtube area. The bash guard has slots on the sides of it as well that allow you to easily get a Cane Creek tool in there for adjustments. We were a bit apprehensive about the durability of this bash but it hasn’t been too much of an issue.

A more robust solution here would be a good idea in the future or if you typically see a lot of damage in this area on your bikes. The 32t chainring allows for a lot of ground clearance and we haven’t had any issue with it contacting any obstacles as the frame bash guard seems to be the only thing that has contacted an obstacle. The bottom bracket height clearance was ample at over 14″ for our setup and we can’t recall ever hitting the chainring.

The Zerode G2 has evolved and uses some lightweight titanium hardware.  The ti shock bolts are quite nice on this frame. The lower shock bolt we would’ve like to have seen on the non drive-side to allow for more clearance to snug up the bolt after the crankset is installed.

Additonal weights can be seen in our verified weights section

It’s hard to compare directly these weights with a traditional downhill frame as the gearbox’d Zerode requires slightly different parts. It saves weight (sprung and unspring) in some of the areas like bashguard, chainguide, smaller chainring size, derailleur, and the lack of a cassette. It gains some weight however through the gearbox and the second chain.

The overall weight of our Large G2 build bike rang in at 39.57lbs. This is with a relatively lightweight build as well although there are some areas where you could achieve some additional weight savings but in general the Zerode isn’t a super lightweight bike.  We’ll outline our build in another update.

Shock wise we went with the Cane Creek Double Barrel coil shock. Other options include a Fox DHX RC4 as well. We were going to try out the Zerode with a Double Barrel Air shock but decided to hold off on that as clearance was pretty tight and would’ve required some small modifications to give it a little bit more clearance. There’s plenty of material in there but we didn’t want to modify the frameset. 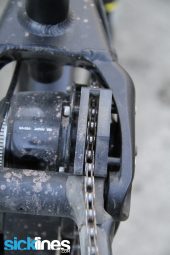 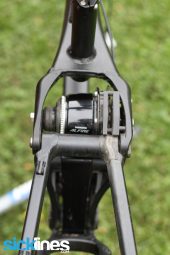 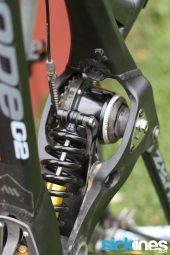 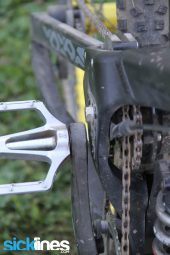 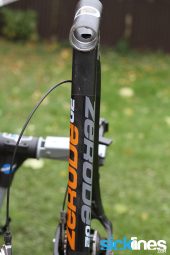 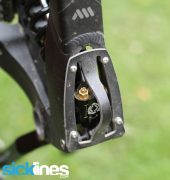 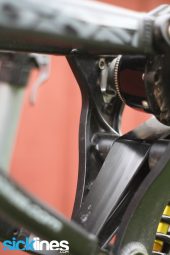 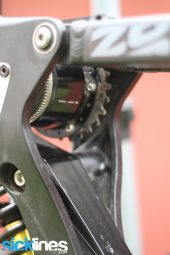 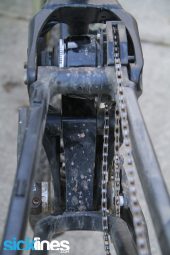 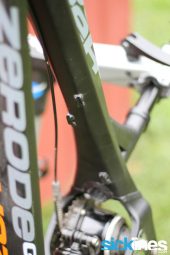 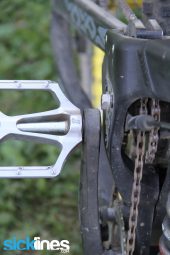 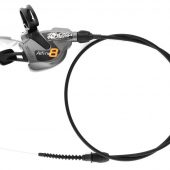 Stay tuned as we take a deeper look at the Zerode G2 in future updates as we dive further into our build and how discuss how it performed in the field.