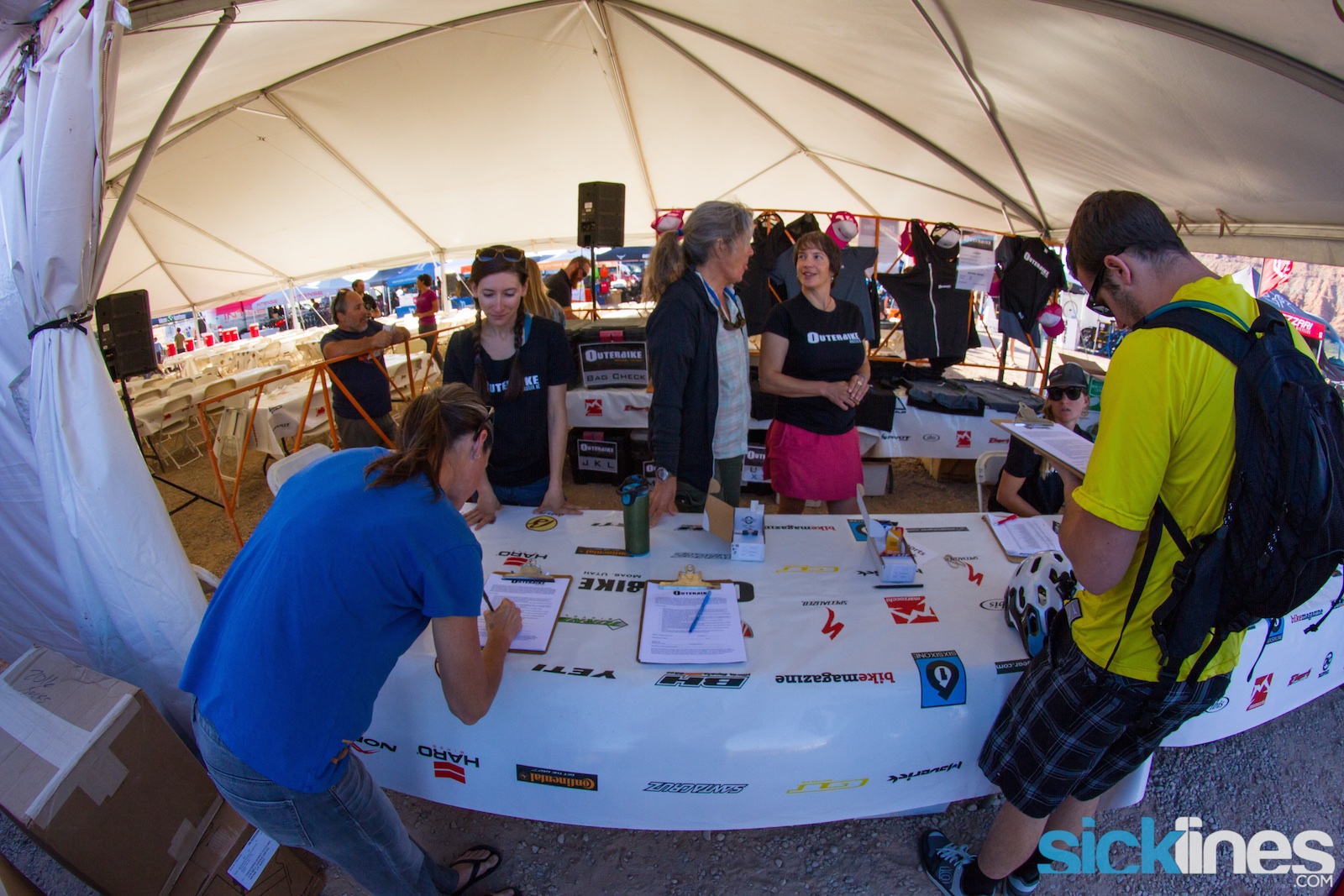 Outerbike 2015 is in the books and what a great time this event continues to be. Check out Part 1 of our coverage inside as we swing a leg over some bikes including Orbea, Knolly, Yeti, and more.

This was my fourth year at Outerbike and it seems to just get better and better. For those of you not in the loop, anyone can attend Outerbike, a 3 day long demo event where many of mountain biking’s best manufacturers show up with all their latest product for you to try out. There are trails to ride directly from the event (Bar M Trails) as well as daily shuttles to some of Moab’s best riding, including Mag 7 and the Amasa Back / Captain Ahab zone. The fine folks at Western Spirit really shine as event organizers and do a fantastic job of making Outerbike not just a bike demo, but a whole weekend of food, beer, and fun with a few hundred of your closest mountain biking friends. It’s an event that I’ve come to look forward to every year. In fact, Outerbike has grown to three events per year, including Moab in the spring, followed by Whistler in the early summer, and then Moab event covered here in the fall.

The lineup starts early every day with hundreds of riders fired up to try out all the latest kit. The fall Outerbike event features a lot of next years product. With so many new bikes and components to try out it’s hard not be be a little excited. At 7:30 AM on day one, with a full hour and a half to go before the gates open, the line was wrapped all around the parking lot.

Despite the huge attendance, packet pickup and waver signing runs smooth as can be. I was through the line in less than 5 minutes this year. Everyone gets a card with their name on it. Trade your card for a bike, return the bike, get your card back, repeat until you can’t stand up.

The icing on the cake? How about a little free schwag?

Speaking of schwag, it flowed all weekend. A couple of Western Spirit’s finest keep the morning crowd occupied till the doors open’ed with what seemed like endless boxes of free gear to toss out. I’ve never been so happy to be standing in line before 8:00 in the morning.

So lets get down to business, a well run event with free gear and well managed lines is nice and all but Outerbike is all about thrashing fresh gear. With that, lets focus on bikes. So many bikes. Bikes from almost every major manufacturer, from a few you may have never heard of, and even a few component companies showing up. Want to try a set of Enve wheels? No problem, grab a bike, roll it over to the Enve tent and they’ll set you with a wheel demo. This year I made it my mission to get on as many bikes as possible. I have been thinking about picking up a shorter travel rig to go with my 165 mm all-mountain ride. I have the worst wandering eye so I can’t say I really stuck to the plan and rode nothing but short travel bikes but I had hell of a good time.

Orbea Occam AM
It was exceedingly difficult to walk by the Orbea tent this year and not notice all of the gorgeous new carbon rigs. Orbea is celebrating it’s 175th anniversary this year yet remains relatively unknown in the US mountain bike circle. The Rallon has been turning heads for the past couple seasons but the introduction of the Occam AM and TR are likely to be just the thing to put Orbea right near the top of every rider’s list. The Occam AM is a full carbon affair featuring 140 mm travel front and rear. On paper, this bike is a little longer travel than I’m looking for but turned out to be an absolute rocket on the trails. I’m sure this is in part due to the top tier parts spec, including DT Swiss carbon wheels but also largely to a suspension tune that lends a firm, sporty feel. Orbea was able to eliminate the pivot at the rear wheel by using a flexible carbon design. I wondered if this would compromise small bump sensitivity but on the trail this concern was laid to rest. I also wondered about rear-end stiffness since we’re talking about carbon with enough flex to eliminate a pivot. Fortunately between the way the carbon is laid up and the boost 148 rear end, stiffness is actually some of the best I’ve felt in this category of bike. I’d really like to spend some more time on this rig but initial impressions were nothing but positive.

Orbea Occam TR
Next up, I rolled back to the Orbea tent and grabbed an Occam TR. The TR is the 120 mm travel, 29″ wheeled version featuring a boost 148 rear end as employed on the Occam AM. The TR is also spec’d with the Boost 110 version of the Fox 32 up front. Like the Occam AM, the TR is a full carbon frame dressed up in carbon everything else including carbon DT Swiss wheels, Race Face NEXT carbon cranks and bars, and a full XTR drivetrain and brakes. More importantly, the geo is absolutely spot-on including 435 mm chainstays, a 74.5 deg seat tube angle and a confidence inspiring 68 deg head tube angle with a Fox 32. I actually rode this bike twice over the weekend and ultimately crowned it my favorite bike of the event. As a gravity oriented rider, the Occam TR concealed much of my climbing weakness and never asked me to hold back when pointed down. The big wheels deliver massive amounts of traction and with boost 148 are as stiff as you’d ever need them to be. I ran this bike with a short stem and together with the short chainstays found the ride very playful yet the 74.5º seat tube angle and extremely efficient pedaling tune made climbing almost fun. My only gripe is with the 32 mm stanchioned fork, this chassis deserves a 34/35 mm class fork but it wasn’t enough to keep me from crowning the Orbea Occam TR as my pick for best bike of Outerbike 2015.

Knolly Endorphin 27.5 and Industry 9 Trail S wheels
The 27.5 wheels might be new but there’s no mistaking this for anything but a Knolly. Knolly signature 4×4 suspension delivered traction everywhere and a glued to the ground feel that you might not expect out of 130 mm of travel. The geo is pure modern on this rig with a stretched out front end and super short rear. I’d feel right at home spinning fast laps in Squamish on this ride when the aim was more mileage than riding the gnarliest trails. As a long time rider of I9 wheels, I was equally interesting in giving the Trail S a try. Honestly, out on the trail I really couldn’t tell a difference between the Trail S and the higher end Torch wheels. The engagement is as instant as ever and the hubs still sing that same beautiful buzzing song. At $850 retail, I wonder if they will represent enough of a savings for folks to choose them over the fully alloy version, time will tell.

Yeti SB5
Hopping from the Knolly to the Yeti SB5 was really interesting and one of the key reasons Outerbike is such a cool event. The Endorphin was well spec’d and fairly light for an alloy frame but the Yeti being a full carbon affair with Enve wheels had me thinking it would be faster everywhere. With this in mind, I ripped a lap on the same test track I used for the Knolly and every other bike this weekend. Interestingly, I just loved how the switch link worked on the descents. I charged the nastiest stuff I could find and the rear end responded with unflappable poise and grip. What I didn’t expect and couldn’t tell just by looking at the geo chart is that I really didn’t agree with the pedaling position. Climbing felt awkward for me and uncomfortable on the SB5 and no amount of adjusting suspension, bars, saddle, or seat post could get me to a good spot. Is this a bad bike? I rather doubt it, but it was interesting to see such a highly reviewed bike turn out to be so clearly not for me.

Stay tuned for Part 2 tomorrow to see more of the bikes we rode. There’s some sneak peaks in the gallery if you’re curious now! Visit www.outerbike.com to learn more and see where they’ll be at next.

On Dutch Ground – Riding The Netherlands

Our Tour de France” by COMMENCAL & SHIMANO with Kilian Bron