We’ve reviewed the BMC Trailfox TF-01 and clearly we were impressed with it. BMC’s new beefier version of the Speedfox is here and it’s the Speedfox Trailcrew. Two models will be available later this summer: the $5,899 SF02 Trailcrew with SRAM X01 1×11, and the $3,899 SF03 Trailcrew with Shimano SLX.

The SF02 features a carbon front triangle paired with an aluminum rear end. The SF03 is a full aluminum model. Both models retain the same geometry, 142×12, and 650b wheels. Both have ISCG tabs, but the SF02 also features a removable ISCG plate for those who choose to run a chainguide. SF02 also gives the rider internal cable routing while the SF03 will be external cable routing. SF02 has a pressfit bottom bracket while the SF03 will be threaded.

Engineers took the opportunity to snug up the rear wheel with 428mm chainstays and slacken the headtube 2? from the Speedfox 29 to a relaxed 66.5? and a front-center very similar to its bigger wheeled brethren. Inspired by BMC’s 29er ‘Big Wheel Concept’, the Speedfox Trailcrew continues to maintain a long reach, short stem, and wide handlebars (750mm).

To ensure the bike represents the Trailcrew mindset of “less race, more fun” BMC’s engineers have targeted a different APS suspension kinematic than in the past. According to Antoine Lyard BMC MTB Product Manager “previously, the Speedfox line was a targeted 50:50 ratio of pedaling and descending. The Speedfox Trailcrew however aims for more of a 50/60 ratio of pedaling to descending fun… we’re taking the stoke factor to an 11!” With a goal of plushness, the new kinematic promotes a higher stroke ratio and more progressive spring rate than the Trailfox 29.

In the current age of specificity with bike models, riders are curious about how this fits into the line of trail and enduro bikes offered by BMC – the Speedfox Trailcrew is a Speedfox because it’s meant to be a pleasure – orientated (rather than performance-orientated) trail bike. Its 29er brother will address those looking for more climbing capability and confidence-inspiring descending, whereas the Speedfox Trailcrew has a more playful character. It is more about spontaneity and messing around and having pure fun on two wheels. 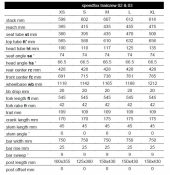 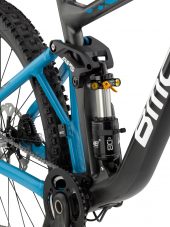