It’s been just about 4 years now since Shimano updated their Saint series of components and when they showed us the details earlier this year on the new 820 series, needless to say we were anxious to check it out.

We opted to try the new Saint M820 components on a 2012 Devinci Wilson (DGR White) bike along with FOX suspension. The Wilson utilizes Dave Weagle’s Split Pivot suspension system and for 2012 the rear seatstays are carbon fiber as well. Check out our review of the 2011 Wilson for more information on it. 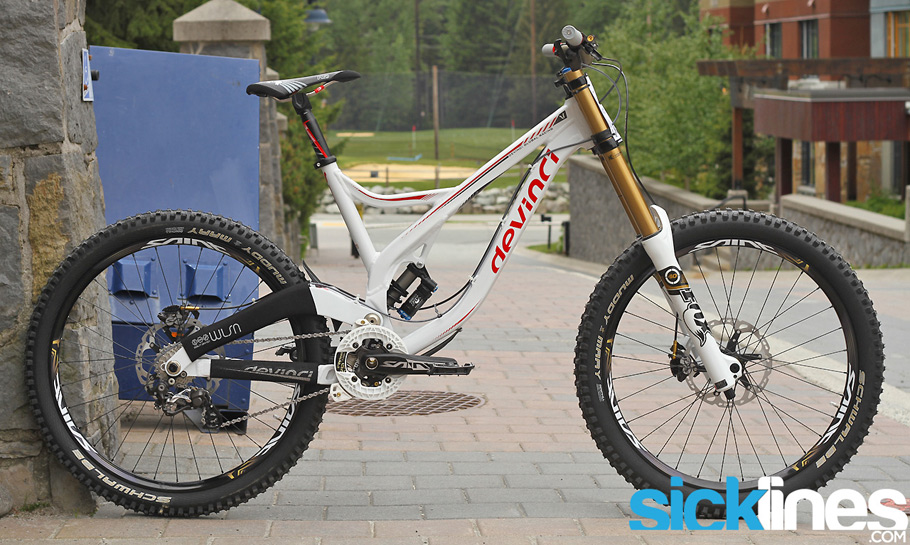 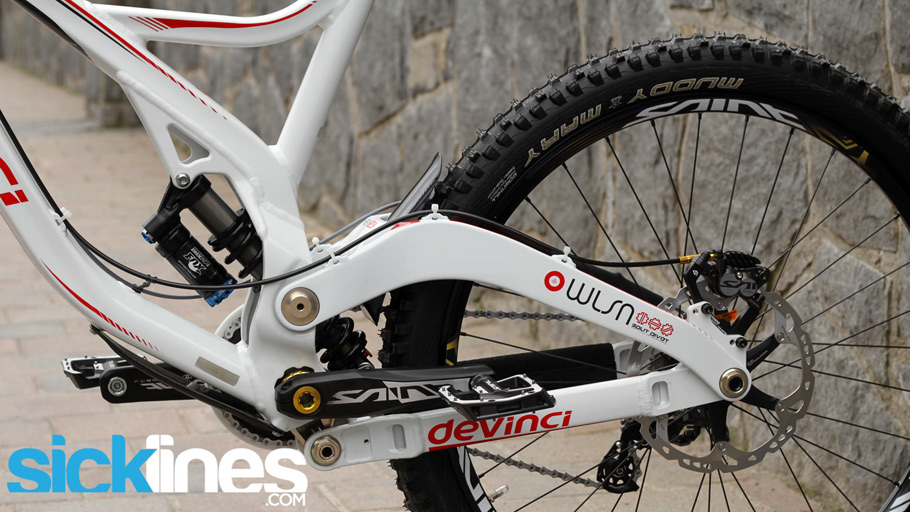 The rest of our bike setup was outfitted with Shimano Pro components and a variety of other personal touches to make it feel at home like the Renthal Fatbar (30mm tall) and Renthal Integra Stem. Wide 780mm width Fatbar handlebars and a wide clamping interface on the stem yielded one stiff setup. 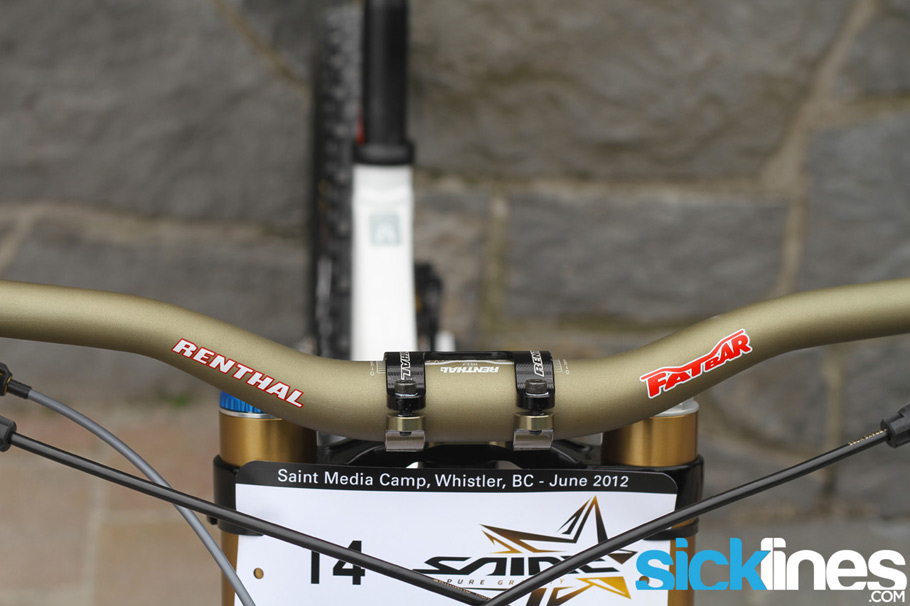 In making updates to the new Saint M820 gruppo, Shimano got feedback from a lot of their pro riders like Aaron Gwin who we spotted ran a variety of Saint prototype products all of last year. Some parts were disguised as XTR but Gwin has been putting the components through its paces during development and it shows in the final product.

In our opinion, the Saint components as a whole have a lot to offer racers and freeriders alike.  We asked Ben to expound a bit more about the brakes and the drivetrain a bit more as these are the parts we were most interested in learning more about from a technical perspective.  Check it out in the video below. 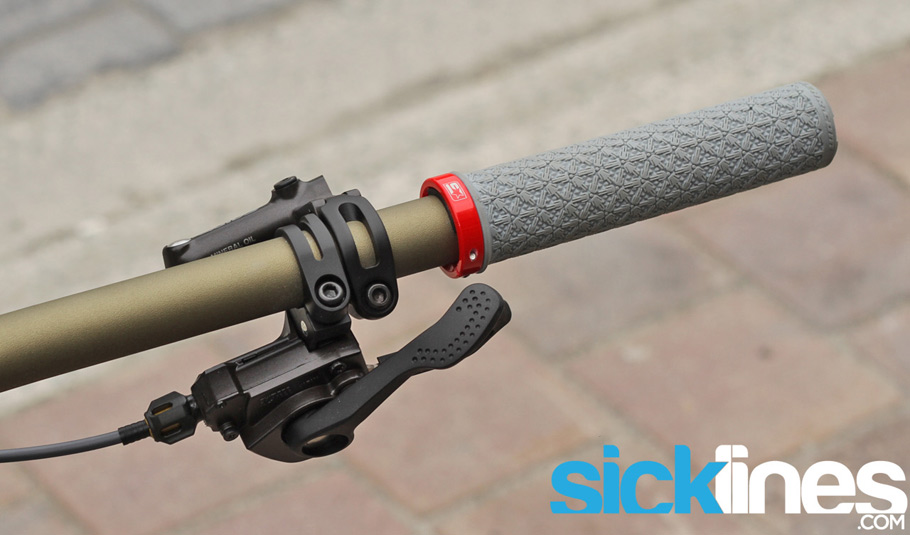 The Saint M820 is a dedicated 1×10 drivetrain system as well.  The limit screws on the derailleur are long enough however to allow riders to allow for smaller ranges.  The Saint shifter has longer shift paddles and bearings inside as well so shift effort is quite low.  In addition to that the shifter is able to do double shifts if you push the small lever or single shifts if you depress it from the opposite side. The rear derailleur has been revamped quite a bit and now features a urethane bumper to keep things quieter as well as the addition of the clutch mechanism to help the chain under control.  A wider pivot and numerous other tweaks also across the board improve the functionality of the derailleur. In our testing so far the addition of the clutch and urethane bumper have been quite impressive in keeping things quieter. The derailleur also has removable mode converter that allows the derailleur to work better with wide range cassettes as well as road cassettes. On some of the test bikes, it was observed that the saint derailleur could contact the chainstay on (especially ones with dropped chainstays) if the mode converter wasn’t used. Specialized’s FSR style bikes (and Norco’s) initially proved to be a little bit tricky to setup as a good amount clearance was needed for the derialleur between the chainstay. With the mode converter installed however this was quickly quelled on those bikes so be sure to ensure you have proper clearance and b-tension when you install the derailleur.  Numerous manufactures also are getting on board with Shimano’s Directmount Rear Derailleur system that they reported would help remedy any clearance issues.

The new Saint brakes are perhaps one of the most impressive updates in the gruppo.  Gobs of power out of the 4 piston ceramic pistons without noise (even in the wet) and in a much more controllable fashion. The power is easier to modulate with these new brakes compared to the M810 series as well.  The lever can be removed now without removing the grips once the safety mechanism is depressed.

They didn’t have the RT-99 rotor (8″ centerlock only option) available for us to try yet but the standard IceTech rotor and IceTech pads proved to be impressive on the power and had more than enough stopping power.  The free stroke screw remained untouched so far with us so the new Zee brakeset could be quite the hit. The Saint centerlock hubs also were a pretty standard affair as far as functionality.  The hubs were laced to some DT Swiss rims and have worked well enough during our testing so far. To round things out, the Saint M820 cranks were solid and provided ample stiffness.  Shimano was able to reduce the weight on these cranks a bit more as well since they’re single ring specific.  Saint cranks have always been high on our list of favorite cranks and we’ve been beating on them for quite some time with great results.  If you ride with your shoes against the arms they can show signs of wear.

Before the new cranks were shown this year, we were curious if Shimano would try carbon in this area but they said they were able to get exactly what they wanted out of the Duraluminum Saint cranks from a weight / durability / reliablitiy standpoint. We can’t argue with the previous Saint setup in terms of durability or reliability and typically ran Saint on our test bikes for that reason.

They may not be the lightest set of cranks on the market but the chances of you needing to do anything to them in their lifetime are slim.  Thomas Vanderham expounded on the durability of the Saint cranks and described how he really loved how durable the cranks/bottom bracket have been for him. He sends it huge and has to rely on them not to explode, bend, or break.  That sort of confidence goes a long way in stepping up your riding when you know your components will work whether you’re a freerider, downhiller, or weekend warrior. Rounding out the key updates are the new Saint pedals.  They’ve taken queues from the DX pedal but have improved upon them in grip and reduced the height of the pedal.  They’ve got ample grip and the pins have a washer underneath them to let you get a taller pin profile should you choose to remove the washer.  They spin smooth and were a treat to use.  They’re not quite as wide as some other pedals that we like a lot but they’re a decent size in general that should suit most riders just fine.

Stay tuned as we continue to post updates on the new M820 Saint components.