For 2013, Vancouver, BC based Knolly Bikes has updated their venerable downhill frame, the Podium. We had a previous generation Podium in our test fleet a few seasons ago so it only made sense to take a look at its evolution. Much has happened at Knolly Bikes over the past couple seasons including a move to manufacturing in Taiwan. According to Noel Buckly, with this move came a significant step forward in manufacturing technology available to them leading to a more refined product. In the case of the Podium, what we have here is a frame that from a distance looks much like the old one yet every inch of this frame is new. Every tube is now hydroformed, the chain stay is now a single tube that has been quadruple butted with full tapers and varying cross sections. A substantial amount of weight has been removed, primarily unsprung weight, from the rear while stiffness is claimed to be up compared to an already stiff previous generation chassis. The pivot hardware at the seat stay to rocker link junction are now titanium as is the hardware at the swing link – down tube pivot. Aside from construction methods, there are some notable changes in geometry. The chain stays have been shortened up from 17.6″ to 17.25″, the head tube angle has been relaxed .5º to 63.5º and travel has been increased ever so slightly from 212 mm to 215 mm. The BB height remains at 13.9″ while stand over height has been lowered across the size range. Previously the Podium was only available in small, medium, and large. Taller riders will be happy to hear that Knolly has now added a size XL option. 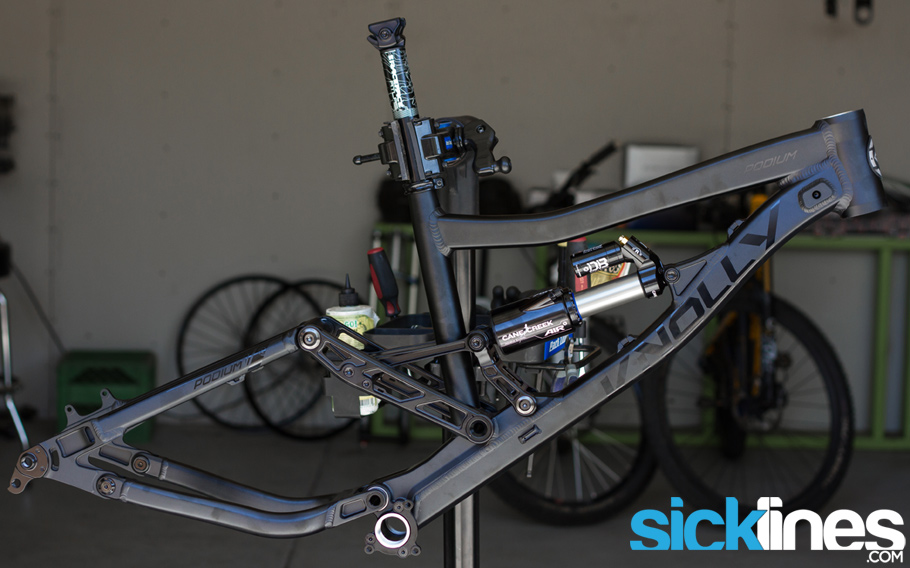 At a distance you might mistake the new frame for the old one despite the fact that every component of this frame has been updated. Weight was clearly a focal point for improvement as our 2010 painted test frame was 4000g bare and our 2013 anodized frame clocks it at a comparably svelte 3559g. It’s not carbon light, but quite respectable and it should be fairly easy to build up a complete bike in the mid to high 30 lb range without blowing the budget. 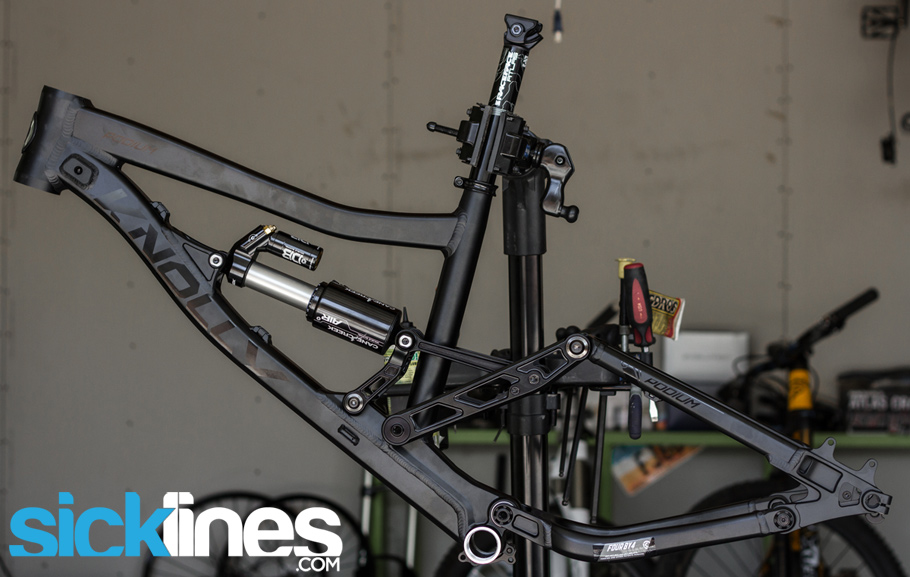 I am really happy to see integrated fork bumpers, yet another moto inspired feature, making its way on to many new frames. I’m completely over fork mounted frame bumpers that spin and shift and leave can frame exposed to serious damage. In typical Knolly style the implementation on the Podium is totally industrial. The hour glass shaped 1.5 head tube is 118 mm tall in all sizes. This makes it easy for riders who prefer their bars low but might lead to high rise bars and a tall stack of spacers for some riders (possibly the taller ones). 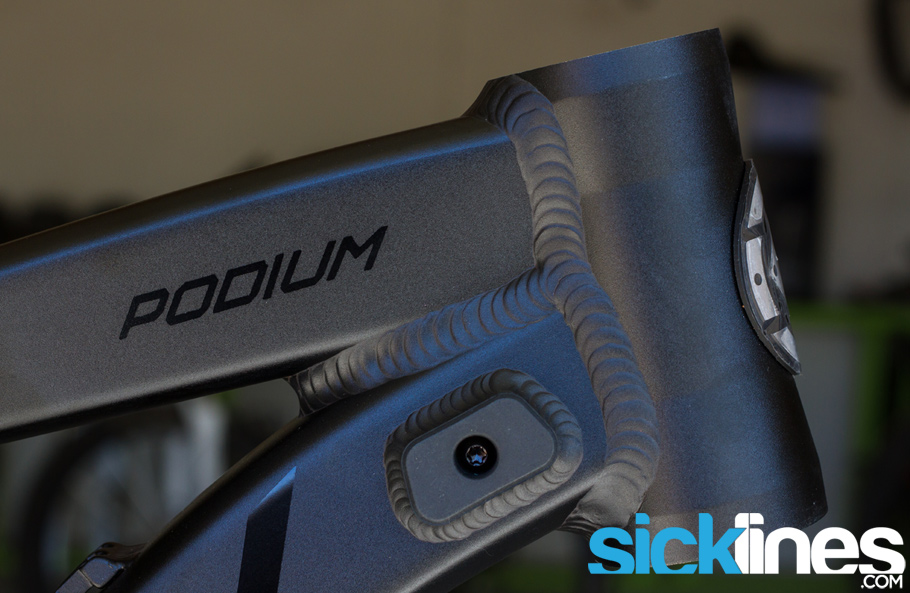 Machining details, including soft edges in the CNC work, lend a considerably more refined look than the previous generation. There’s not a single after-thought hardware store bolt on this frame, every where you look there are super clean custom fasteners. There are a lot of captive nuts used in key areas as well that makes it easy to check all of the bolts with the bike fully assembled. I did notice that the room is a little tight when installing the shock on my medium frame, but I found that rotating the shock mount 90º made it easier to slide into place in the linkage. 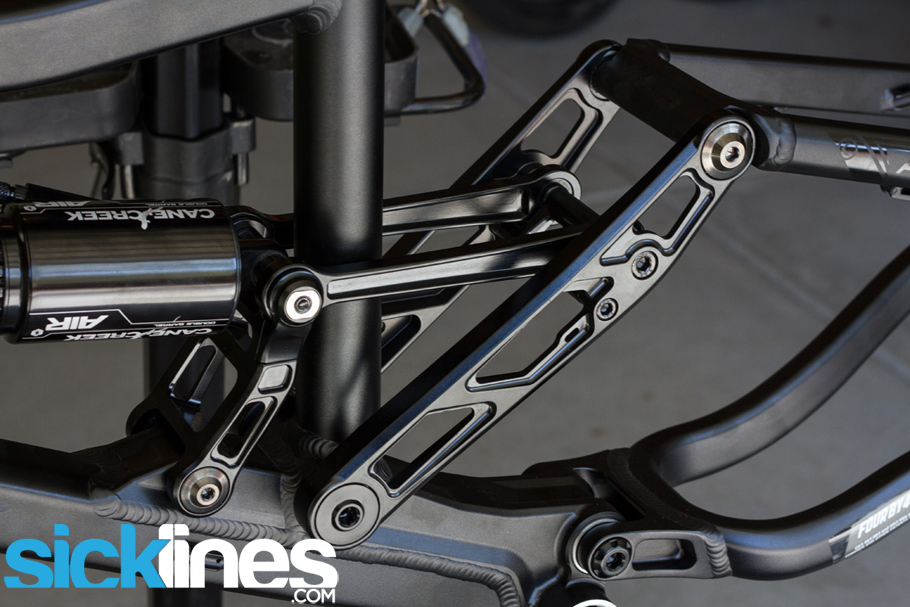 The dropouts have been heavily refined to eliminate weight and complexity. A 157 mm axle is provided with the frame and is clamped in place by a pinch bolt that now threads from the top. The rear derailleur hanger is now a more simplistic affair rather than part of a larger replaceable dropout. This should lower the replacement cost significantly should your day go afoul with a mangled hanger. 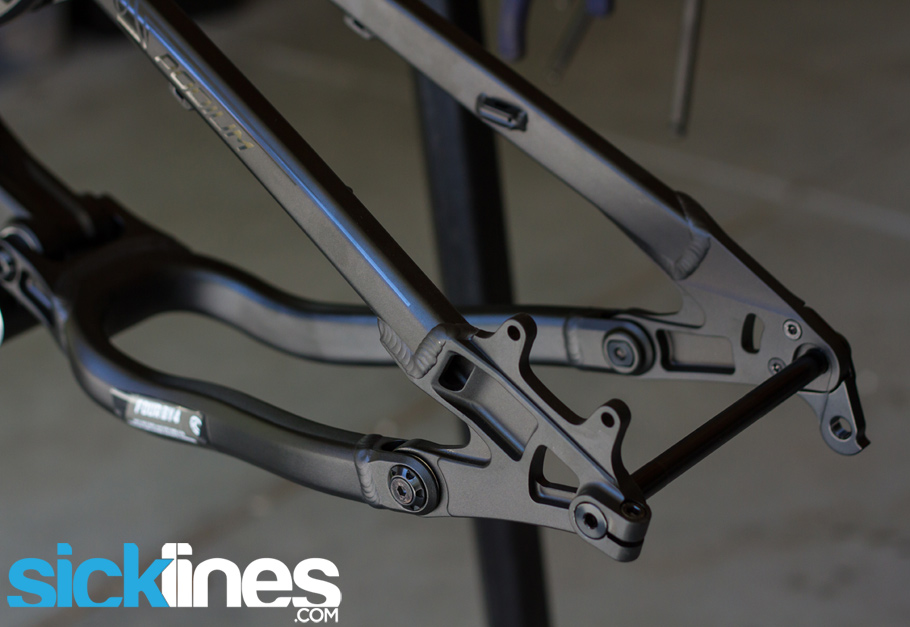 Replaceable ISCG-05 tabs surround an 83mm bottom bracket that was fully chased, faced, and prepped for assembly right out of the box. Having broken ISCG tabs in the past, I rather appreciate the ability to swap them out without having to replace the front triangle. 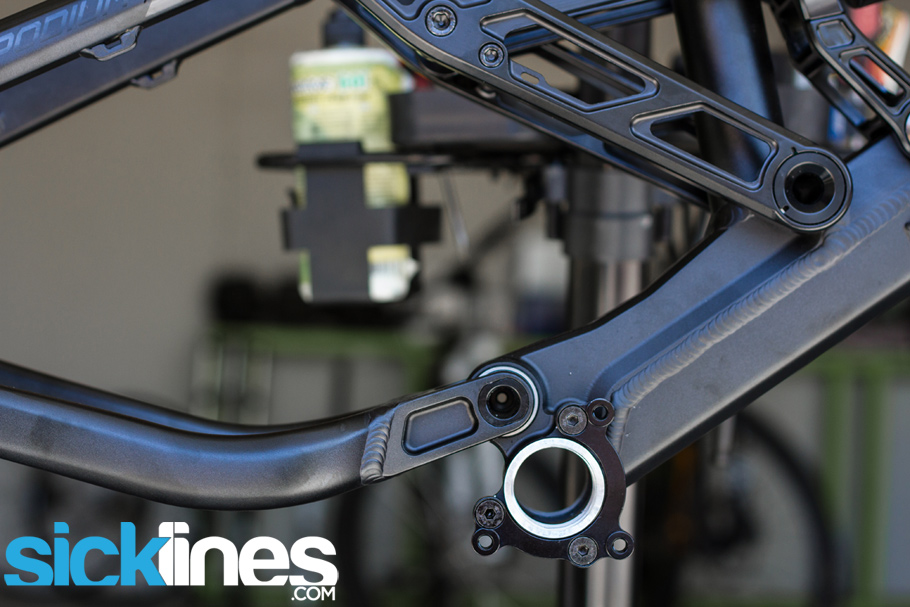 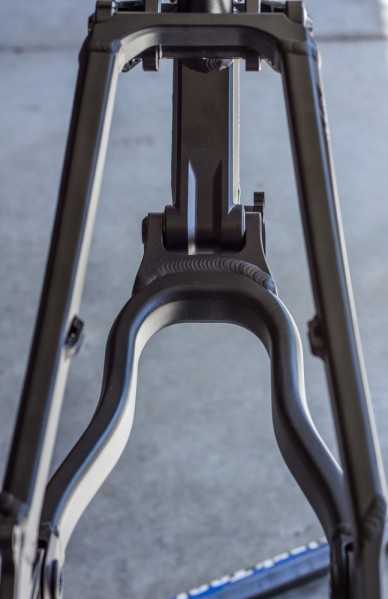 Knolly managed to create a chain stay out of a single tube that has been heavily worked to deliver on weight, strength, stiffness and ride quality. The chain stay profile has also been altered to allow plenty of clearance for long cranks and/or big feet without rubbing. The seat stays have been heavily re-worked and are responsible for the majority of the weight reduction. This means that a lot of the weight savings over the old frame is unsprung weight which should help improve suspension performance.

On to the build…

I keep saying that I didn’t set out to build this bike light, but then the first thing that was ordered for the build was a new set of carbon Race Face SIXC DH cranks so that set the tone quickly for a light build. They may not be the most cost effective cranks out there but the weight savings is startling and over the past 3 seasons that I’ve been using them, they have been reliable. So with my carbon fetish temporarily satisfied, the next thing I grabbed was a set of Schwalbe’s Hans Dampf tires with the new Super Gravity casing. This means sub 1000g tires that can shred on the downhill.  Steve Smith and other pro riders have had great success with this new Super Gravity design on the World Cup circuit so to say they’re proven now is a bit of an understatement. The Super Gravity casing features a DH style sidewall with a lighter center tread saving between 250g-350g per tire over a traditional DH tire setup. Rotational weight is one of the best places to save weight on a bike as it helps in acceleration, deceleration, and much more. Needless to say all of the sudden I was on track to save a few pounds off a typical build even before decided to go with an air sprung fork.

It’s no wonder the complete build ended up at 32.82 lbs But I digress, the point of this build was not to win a weight war and the point of this discussion is to convey that what would have previously been an extremely difficult weight to achieve, even just last season, is now easily attainable with off the shelf parts. Lets look closer at all the bits and pieces that made this build come together. 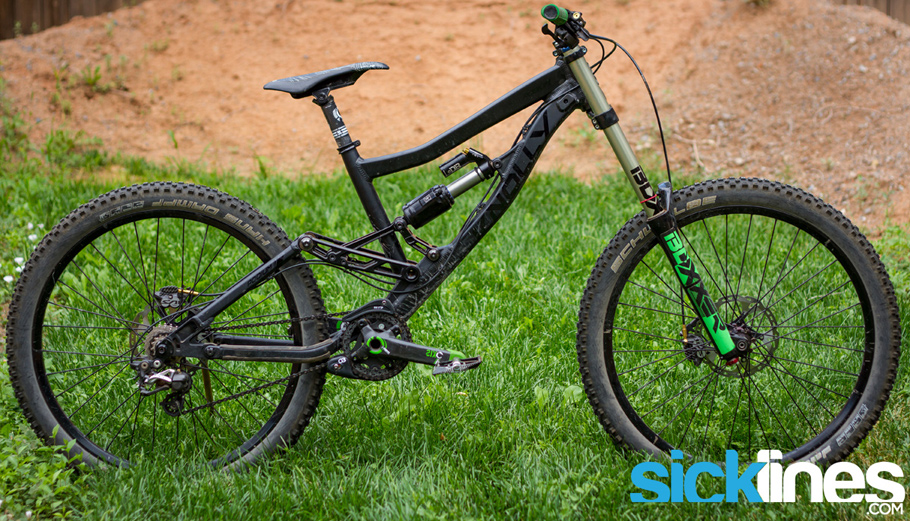 Knolly is offering several shock options for the Podium this year. I went with the Cane Creek Double Barrel Air option after having some success on other frames in the past. For 2013 the Double Barrel Air received an update to the port size between the inner and outer air canisters making it considerably more linear than the first version and more suitable for long-travel applications. The XV air can shown was installed for comparison testing but is not the Knolly recommended configuration nor the configuration that we used for our testing that we’re reporting on here. 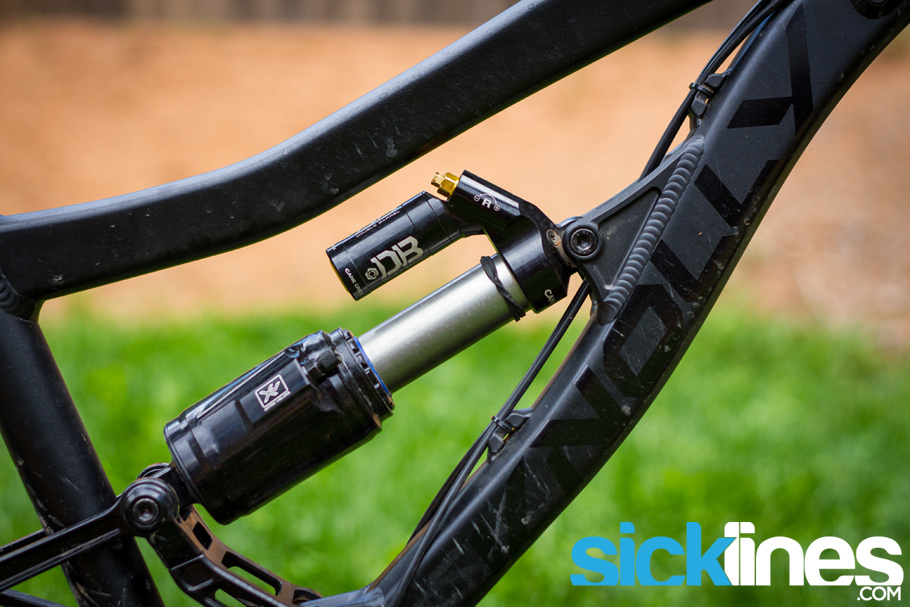 I reused my 2012 Boxxer WC up front and had Slik graphics update the look with custom decals to match my theme. The Industry 9 wheel set using DH spec spokes with Industry 9’s house brand Enduro rim is also from last season. At under 1900g for a full setup, their durability has been excellent needing only the occasional truing and tensioning. As mentioned earlier, I went with the rather highly anticipated Schwalbe Hans Dampfs in the Super Gravity casing which setup tubeless effortlessly with just a wrap of gorilla tape and a bit of Stans sealant. I tend to be lazy and use a compressor but I did try mounting these tires with a floor pump and they inflated and sealed without any drama. Hans Dampfs tend to work well for me in the dry Utah and Colorado soil so I’m expecting great things. I’ll be swapping between Trailstar and Vertstar compounds depending on conditions. 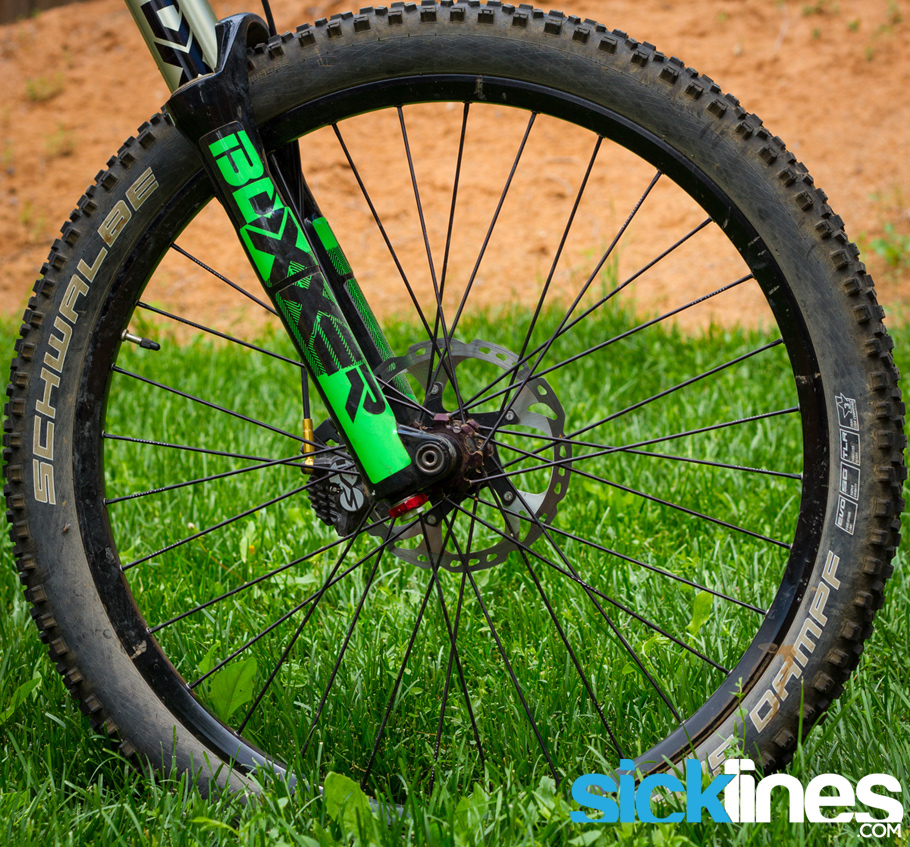 I went with Race Face SIXC carbon DH bars to help dissipate vibration and braking bump impacts. I like to ride with my hands at the very outside of my grips and so locks on the outside can tend to bother my hands. Race Face Half-Nelsons use a lock on the inside only that clamps a full length internal tube to keep them from throttling. Shimano’s XTR brakes rate as my all time favorite trail brakes, mainly for the lever, so I decided to give the new M820 Saint brakes a shot on this DH build since they use essentially the same lever. 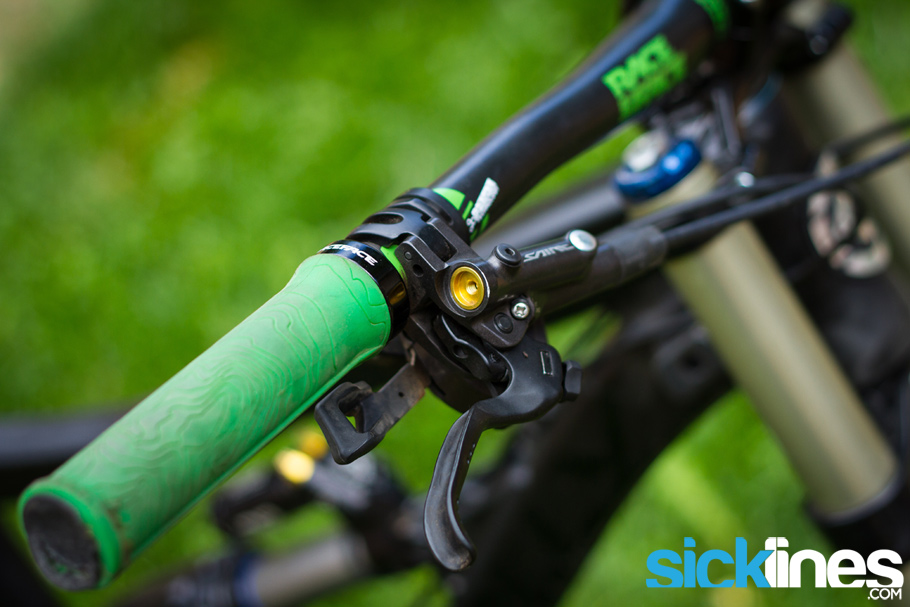 I deviated from my typical stem setup and went with a super-short 28 mm Straitline Ultra Direct mount. My previous DH bike had a reach measurement of about 15″ where as a medium Podium has a reach of 16″. I seemed to get along just fine with the shorter cockpit so I decided to give the 28 mm Straitline stem a try in place of my typical 50 mm stem. What I hoped to achieve here is improved ability to move the bike around, a smaller feeling bike if you will, while maintaining the stability inherent in a longer wheelbase. This is not a new idea but it’s one that I’m excited to play around with and certainly raises some questions, particularly around getting weight over the front-end properly. 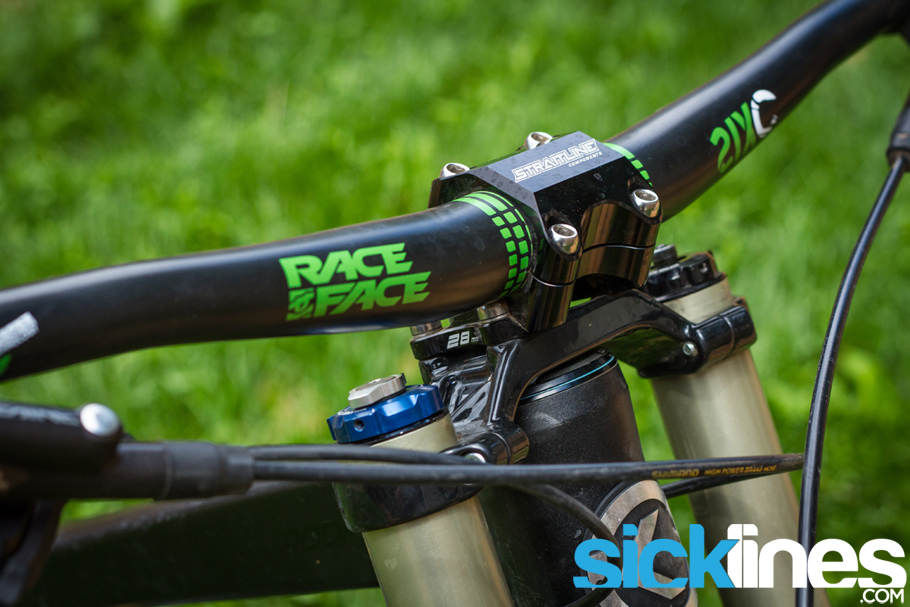 For the back half of the cockpit I mounted a Race Face Atlas I-beam saddle on a Race Face SIXC carbon seat post and secured it with a Chromag clamp. The I-beam setup is super light, easy to adjust and seems to stay put. This is one area where I was able to keep things light and actually save a buck over running a super light road saddle. The Atlas saddle looks like it might be more durable while keeping with still being small and out of the way.

The rear end of the Podium makes the 2.35 Super Gravity Schwable Hans Dampfs look tiny. Mud clearance at the seat stays and chain stays will be a non-issue with any modern high-volume tire. 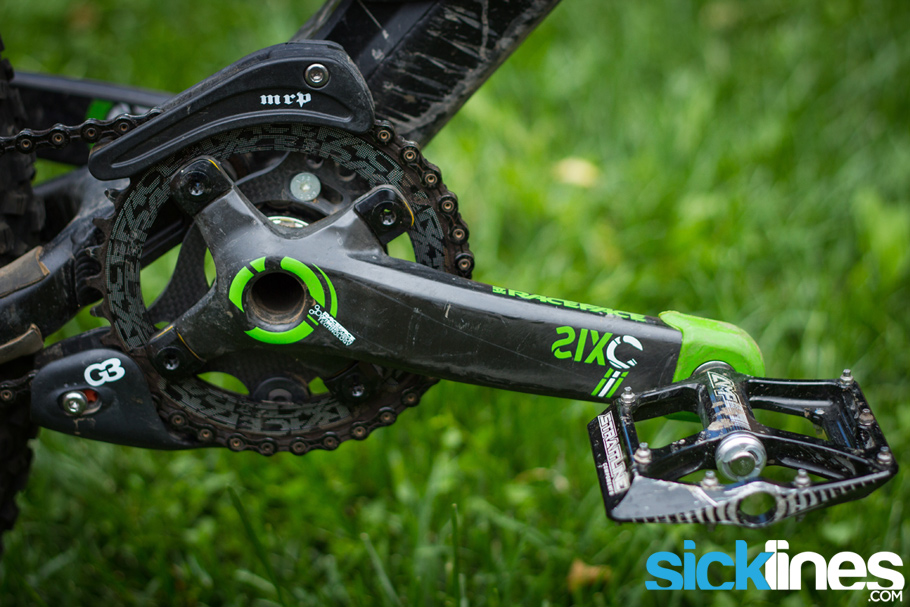 At the other end of the drive train line, I went with a clutched M820 Saint derailleur for it’s reputation for durability and ability to control chain slap. A SRAM OG 1090 cassette with an 11-23t range keeps the ratios nice and tight. I like to make mention that this cassette has limited mud shedding capabilities but it hasn’t presented a problem for me yet. In the background you’ll see the Saint 4-piston caliper which clamps a 180 mm rotor. I used 3M 2228 mastic tape to protect the chain stay from chain slap. Continue to Part 2 to see our impressions on how this bike rode 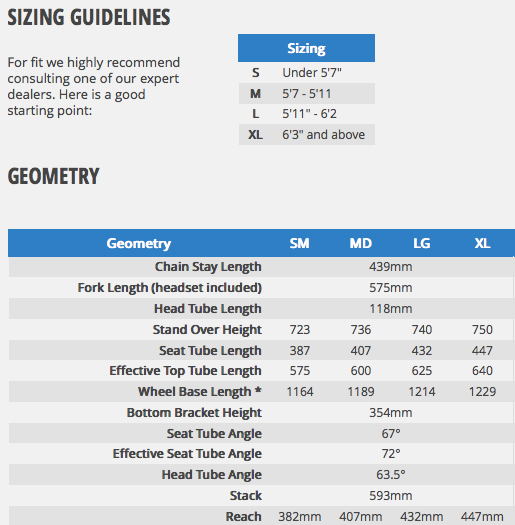 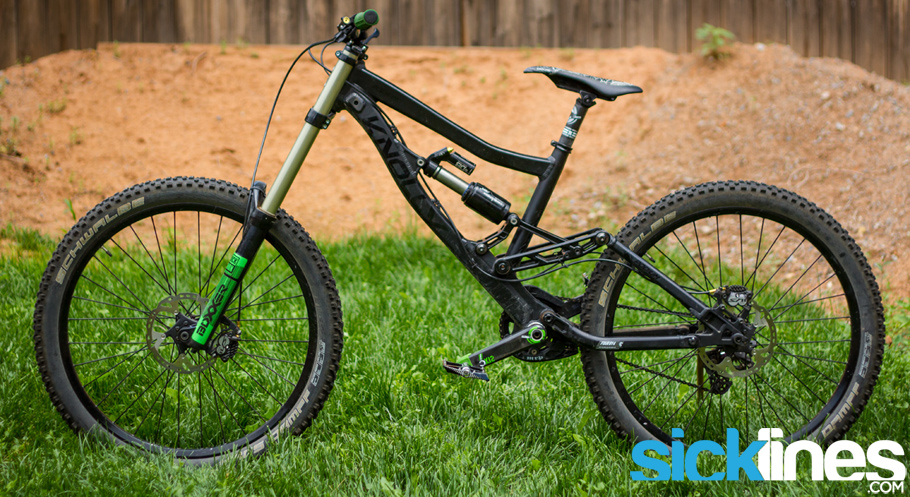