Banshee Bikes released the MK II last year after several prototype iterations.  Through various prototyping stages they’ve refined their downhill bike into what you see before you here. If you’re curious to learn more about the changes they’ve addressed throughout the Legend’s development we urge you to visit our MK II project page, MK I project page, as well as the Banshee blog to learn more. We could easily spend pages here detailing those changes.

Focusing on the Banshee Legend MK II, it’s a full on downhill bike designed to be ridden in race-like conditions and tracks. Keith Scott summarizes some of the key points in the video below. We urge you to watch this video, as it has lots of good insight into the MK II.

Banshee Bikes strives to build things in a reliable and stiff manner and to no surprise the MK II follows down this road.  The Legend MK II uses various machining and forging techniques to keep weight down in key areas, while still providing ample stiffness and strength for a downhill bike that should last.

Banshee utilizes big bearings at all pivot locations and after a full season of riding the bearings on our MK II were still smooth.  The pivot axles themselves are quite large and Banshee chose to use titanium here to keep the weight down as well. Access to most of the shock settings are easily reachable in the frame no matter which shock you’re running.  The rebound knob tucks inside a bit but is still reachable. The shock bolts are cleanly mounted to the frame and requires no crescent wrench to install. The lower shock bolt removes from the non-drive side, so removal is easy if need be.  The lower shock hole is somewhat hidden by the frame when fully installed, so checking its torque when doing a bolt check means removing the upper shock bolt or compressing the bike slightly to ensure it’s snug. The weight of the bike is centrally located and fairly low in the frame.  This helps the bike feel balanced since it’s not too forward or rear heavy. Overall the Legend MK II isn’t the lightest frame out there but certainly is competitive.  Check our weights section to see how it compares. Up front, the 1.5” headtube allows for usage of just about any headset. The full 1.5” headtube gives tons of options for the user to pick from to suit their taste.  You can mount angled headset cups and much more with ease here. The rear of the bike utilizes a Maxle rear axle.  For 2012 there is a slightly revised Maxle but Banshee also hinted that they’d be offering a titanium axle option as well in the future. The ISCG 05 tabs are mounted cleanly to the front triangle (as seen in the photos above). We had no issues mounting up various guides to it without any modification. Banshee includes a variety of extras with the Legend like touch up paint and various spare parts.

some of the various included parts (click to enlarge)

The paint on our legend held up OK throughout its use.  We did use some protective clear coating on it to help in major rub areas but noticed some cable rub in areas where it wasn’t so protected.  You can check out our detailed photos to see more details on the frame to make your own decision on the finish of the frame. We had no major quarrels with their final product.

On the MK I Banshee offered two shock positions, but the MK II was narrowed down to one setting.  I think they chose wisely here.  Banshee’s MK II offers good geometry out of the box and any minor tweaks can be done with an angled headset to accommodate for those who want a slightly different setup. The three size options work well here as well.  Most companies are seeing the benefit of doing a 3 size range and now others are stepping it up to 4 sizing options.  Banshee’s range should fit most riders within reason.

Banshee chose a fairly slack head angle at roughly 63.8 degrees with a  13.7” bottom bracket height.  Wheelbase numbers line up comparably with other current downhill bikes. Banshee has done a nice job on their static geometry numbers that translate well once you begin riding it.

The rest of the parts like the Crank Brothers wheels, Chromag parts, Shimano Saint Gruppo, Point One Pedals, e.thirteen chainguide, and other parts chosen can be read about in the MK II project page, .

At 180lbs  I found a 350lb spring worked best on the RC4.  Most riders of all weights should be able to get the appropriate spring for their weight.  We tried the Legend with a Cane Creek Double Barrel as well.  Personally I felt the RC4 offered more than enough adjustment for the bike and was easy to set up to my liking.  You can read more about the suspension design in the project page. There are some bikes that pedal better but the Legend does OK here. The MK II pedals decently well without sacrificing ride quality too drastically. With hard pedal inputs initially I noticed the suspension trying to help me put power to the ground which was a little awkward at first but soon felt natural enough. The Legend pedals realitvly well but there are others that pedal as well or better. 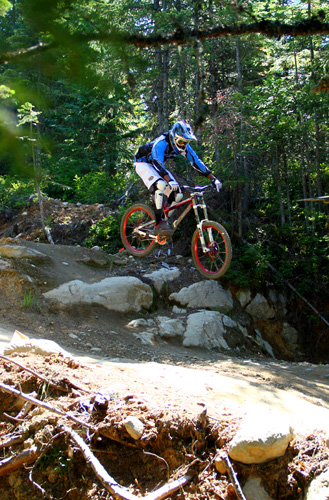 On medium to high speed sections, the Legend felt best as it tracked through rough terrain with ease.  The bike felt planted in rough sections and felt like it maintained a good position in its travel. Multiple quick medium/big hits that can disrupt a bike’s suspension felt great on the Legend as well.  If speed is a high factor on your trails with big suspension jarring features, the Legend will be a great bike. 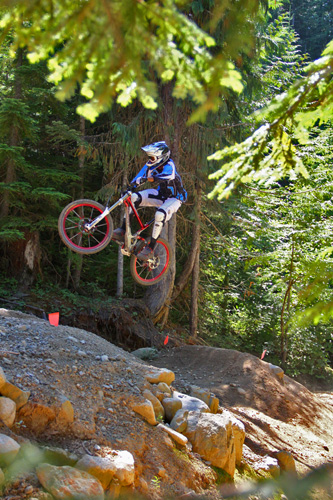 Turning on the Legend felt best when charging corners with good speed and carrying momentum through them.  The more speed you can maintain before turning, the better on the Legend.  It rewards an aggressive cornering style. It can feel a bit slower on tighter corners and doesn’t snap as easily in my experience. 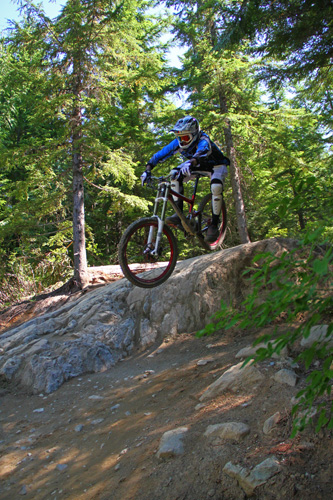 When it came to jumping the Legend I felt it liked some jumps and others not so much.  Jumps that require a quick pop off of the lip required a bit more effort in my experience, especially if they weren’t high speed.  The wheelbase and suspension felt like they elongated slightly and took away from some of the pop off the jump I was used to with other downhill bikes. 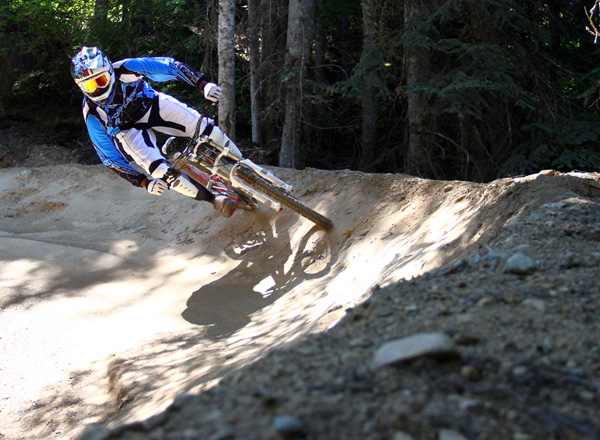 Banshee has put together a solid downhill bike in the MK II that will easily last you more than one season.  The areas where I felt the Legend shined best would be durability, stiffness, big hits, rough terrain, and speed.  It loved being thrown into rocky terrain and was a breeze to maintain high speeds in fast moving terrain.  Racers who typically tackle a combination of high speeds sections paired with rough terrain will get along well with the Legend MK II. If this sounds like your kind of riding, the Legend MK II is worth a look.

If you’re looking to purchase a Banshee Legend MKII for yourself we suggest checking out a reputable dealer like Red Barn Bicycles.