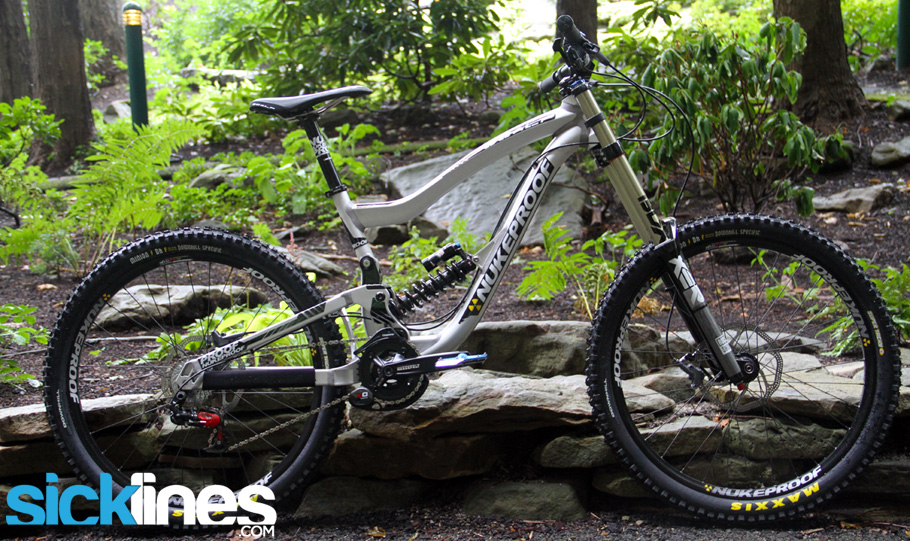 If you’ve found yourself here, undoubtedly you’re interested to learn more about the Nukeproof Scalp. It’s a tidy bike that has attracted privateers and professional athletes alike. What is the draw to the Nukeproof Scalp? Price, Reliability, and Performance seem to be some of the biggest draws for this bike.

Available in two trim levels up to 2013, the 2012 Nukeproof Scalp you see here is the Comp model. A Pro version was also available with a higher level build kit as well as a frameset option as well. The 2012 models can be found for quite a deal now online via Fanatik Bike, CRC, or your local Nukeproof dealer. 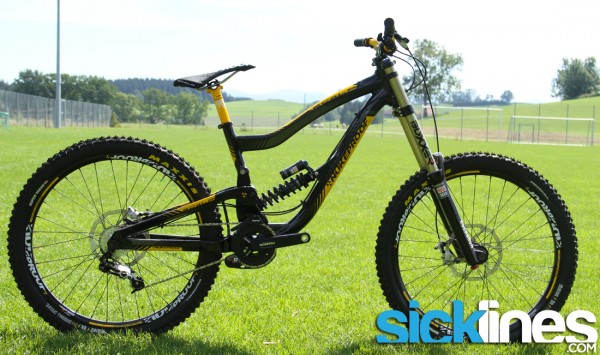 For 2013, Nukeproof has adjusted the Scalp’s pricing as well to allow for their new Pulse downhill bike to shine a bit brighter in their lineup. The bike remains much the same as 2012 but has a revised support brace, bold new graphics (sprayed on decals), and that’s pretty much it save for an additional gusset on the top tube. 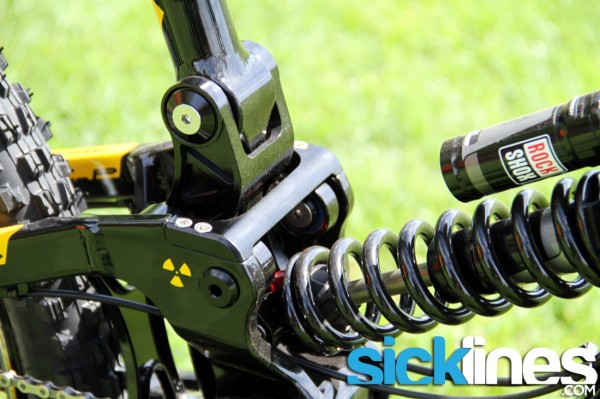 The 2013 Scalp is only available in one model, is offered in a slightly lower build spec, and provides an even lower cost of entry for riders with MSRP at € 2,799.99. The frameset is also available with a RockShox Kage Shock for € 1,699.99 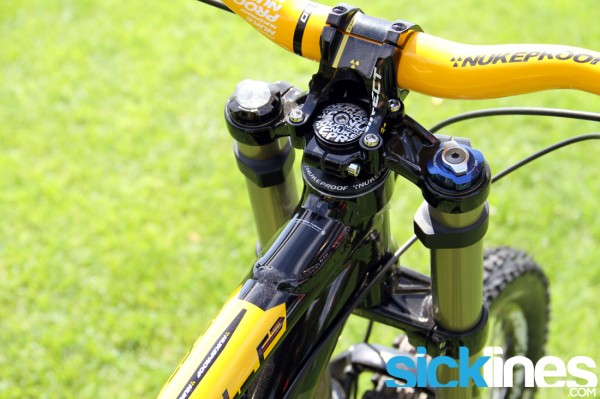 Without further adieu however, we’ll jump into a quick review of the Nukeproof Scalp and tell you a bit about our time aboard it. Initially we were going to try it out a bit longer but since the bike was provided by Hotlines (based overseas) , customs started pestering for it to be returned a bit prematurely that put a wrench in some of our plans for it. 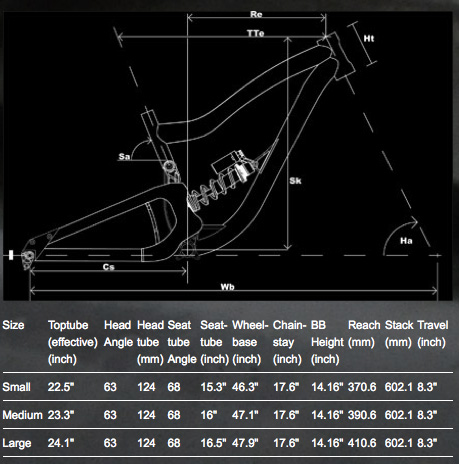 One of the major reasons people have been so interested in this bike is because of its price. For the money you can get one of these for it’s hard not to consider, especially if you’re paying retail.  Nukeproof is able to get this bike to riders quite cheaply due to the contacts and bulk purchasing power they have. Riders have flocked to it for the price certainly but also because it’s a good bike overall as well that’s been proven out in the World Cup circuit.  Currently you can find the 2012 Nukeproof Scalps at even more amazing prices so it makes even more sense to pick one up. 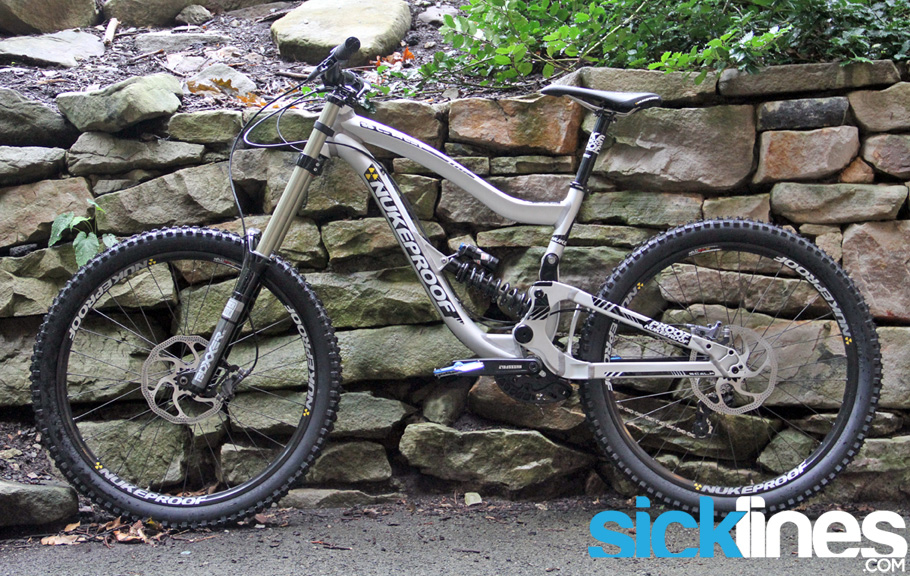 Like all bikes, we like to take them apart to get a better feel of how things go together and general structure and we were pleased with the way most of the parts on the Nukeproof installed onto the frame.

The lower shock area is a bit tight to get a wrench in to snug up the shock bolt. Accessing the pivots themselves will require the removal of the shock to cleanly access most all of the linkage pivots. Snaking the brake cable through this general area might also require you to remove the pivot (or hose) to install cleanly.

The lower shock hole is also keyed to hold the nut so when you turn the allen key you don’t have to worry about holding the nut. This also makes it a bit more fool-proof should something go wrong as you won’t booger up any threads since there’s just a nut here. 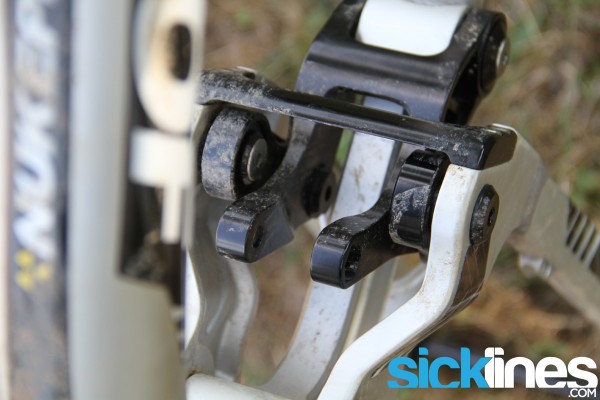 A standard nut sits in a keyed linkage

The rear disc brake best we can tell requires a full 8″ rear rotor as the frame doesn’t have a ton of clearance for smaller adapters.

The rear axle system is pretty straightfoward and we had no issues with it. The pinch bolts do thread in from the underside to secure the axle once its snugged up.

The rear derailleur hanger is solid and a separate piece so if you do happen to bend one of these, its not too expensive to replace. 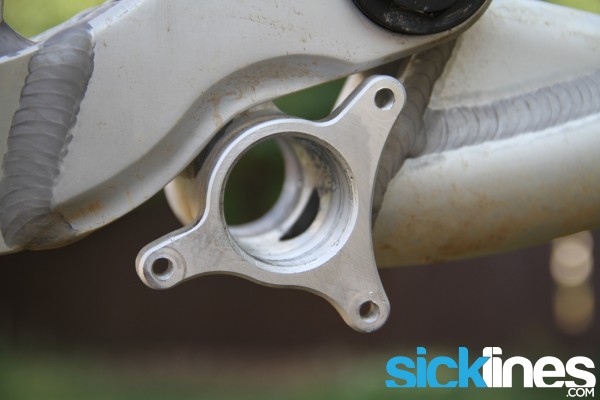 The ISCG-05 chainguide tabs on here are pretty robust and are machined into the bottom bracket shell. No welding here and it was straight as an arrow.

The thick Nukeproof decals worked nicely to aid the bike in rub-protection and dings as they used a thick vinyl that provides some protection as well for the frame.

Trim wise, Nukeproof has some decent components on here including Maxxis Minion DHF tires, SRAM X9 rear derailleur, Truvativ/MRP G2 chainguide, RockShox Vivid R2C, and a smattering of Nukeproof parts to polish off the build that worked without fault during or testing. The low level SRAM Elixir brakes aren’t the top of the line offering and had organic pads in them. This would probably be one of the first pieces we’d upgrade if you had a little bit of extra cash to spend or at minimum consider purchasing some metallic pads.

The bike came without pedals so we decided to bolt up some of Spank’s new Spike pedals to the bike and the handled things very nicely.  They’re easily one of our new favorite set of flat pedals.  Thin, durable, won’t break the bank, and have ample grip.  Spank updated the axle design on these awhile ago and offer a free upgraded axle kit to anyone that has the old one. 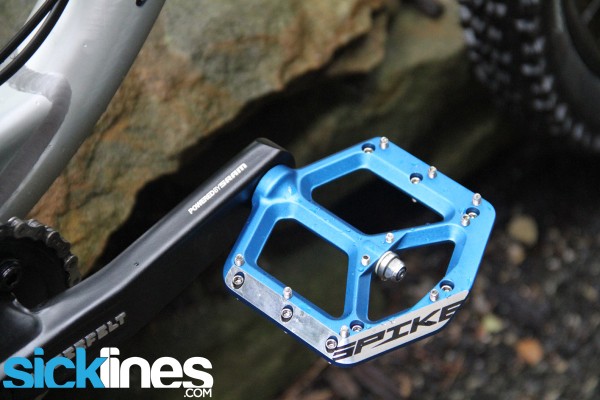 It was also pretty straightforward to clean mud from the bike. The seat-tube acts as a a built in fender of sorts as well protecting the shock from a good amount of debris. 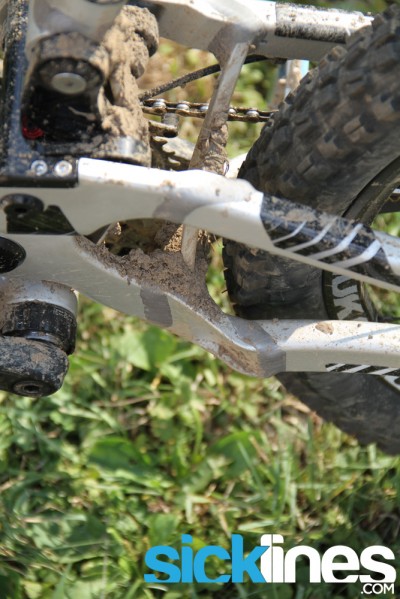 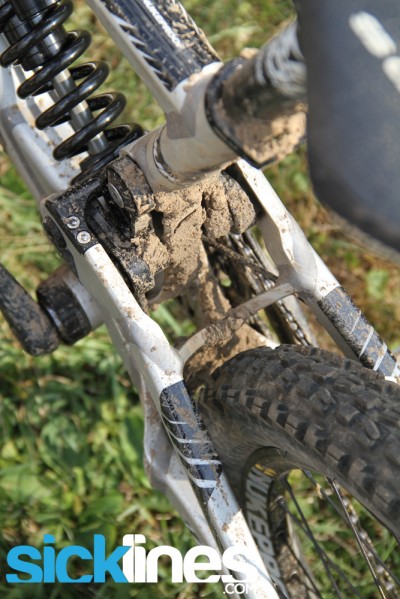 The chainstay portion of the bike also cleared mud easily as it is quite open (look at gap in the picture above on the right) in this area where most bikes can pack up mud in the chainstay bridge.  The bike has plenty of clearance for most tires as well which was nice to see. 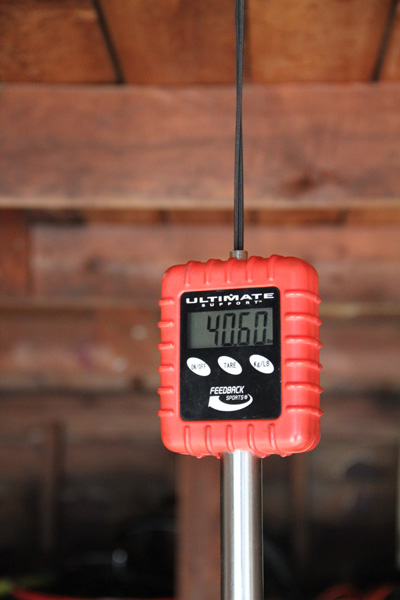 You can see additional weights including the bare frame weights and more in our verified weights section.

The Nukeproof Scalp’s suspenion is a single pivot linkage actuated bike. The main pivot is in a fixed position and the shock is actuated by a pulling link that Nukeproof tuned to their specifications to get the suspension kinematics they were after. It pedals good enough as the main pivot is located roughly the same height as the chainring which keeps things predictable. Braking on the bike felt pretty standard and we had no major quarrels with the way it handled braking. 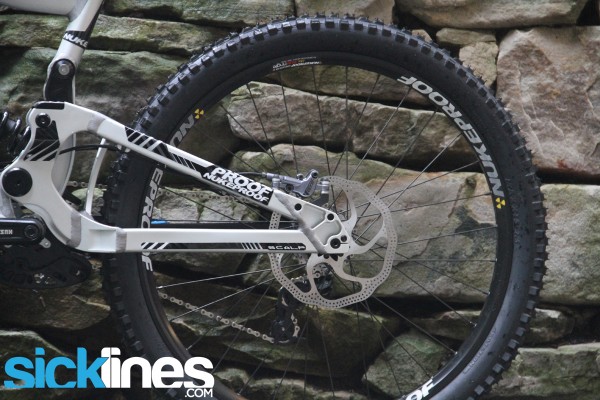 I felt that the shock rode well in the mid-stroke and had a nice ramp to it towards the end that kept it from bottoming out harshly. It wasn’t the most supple bike in the low speed bumps but certainly wasn’t too harsh either. The frame weight overall is balanced weight wise so there wasn’t any odd feeling to it being weighted oddly. The bottom bracket is roughly 14 inches off the ground and didn’t feel too low nor too high. Personally I’d have liked it a little bit lower coming off of bikes that are quite a bit lower but it worked fine. Head angle was a nice and slack at 63 degrees which seems to be the standard nowadays from a lot of manufacturers. Overall the Nukeproof Scalp is an easy bike to ride from the get go. It is balanced and has a neutral bias to it that naturally positions you centrally in the frame ready for just about anything. The bike is easy to control in the air and overall if there’s one word to describe the Scalp it’d be predictable. 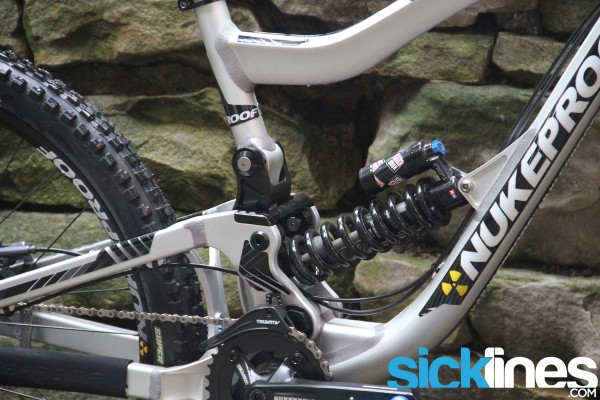 While we didn’t get a ton of time aboard the Scalp it did a great job at being maintenance free the duration of our test. The suspension was pretty easy to setup and the lack of dials really helped urge you to just get out and ride the bike instead of fiddling too much. Given that the bike isn’t the top of the line trim level, you can’t fault the components too much as this trim level is meant to be entry level. I’d argue that most riders could get along fine aboard this bike in its stock trim as its got a pretty reliable build out of the gate as it stands.

The Scalp is a great bike for a rider looking for a low maintenance bike that can deliver day in and out. It’s not the lightest out there but the price will make your wallet thank you. With so much savings, this gives riders an easier entry into the sport and racers also get the benefits of having more money for other gear items and trips. Just imagine all the extra things you could do with the money saved when you go to a bike like this.

Learn more about Nukeproof via their website, www.nukeproof.com.  If you’re looking to purcahse a Nukeproof, check their website for dealers as well as Fanatik Bike.