One of the most vital components of a gravity bike is brakes and Shimano took it upon themselves to rework the Saint brakes quite a bit. Reminiscent of the 4 pot XT brakes of the late 90’s, these things pack a ton of power to say the least.  Additionally, the Saint system uses mineral oil so its safer for you and your bike. To begin with, the caliper is bolted together (unlike the mono body of previous Saint) and came stocked with metallic pads. Shimano went with the metallic pads because the brakeset is made for downhilling. Stocking organic pads was forgone as these brakes are made for stopping when you need them to. Organic pads just don’t offer the same performance especially once things start heating up.

Shimano also uses two different piston sizes in the caliper to aid in the overall power and modulation of the brakeset. The pads are bottom loading and are held in place with a bolt and pin. One small thing we would’ve liked to have seen top loading pads in here to aid in pad replacement and checking the system for potential issues easily. The pad is bigger than previous Saint pads, and shares an almost identical shape as the XT 4 piston brakes with a few small changes.

It is important to note that you do not have to use centerlock rotors with the Saint braking system.  Shimano offers standard 6 bolt rotors in a wide range of sizes as well if you’re running Shimano hubs. The servo wave lever Shimano has beefed up as well. It features tool free reach adjust and also has a free stroke screw that can be adjusted to help in setting up the bite point of the brakes. The tool free reach adjust worked as advertised but the free stroke screw didn’t have quite the impact on the setup as we’d have liked. To set up the brakes for us Shimano used the bleeding to dial in the point at which the brakes engaged and the free stroke isn’t as blatant at adjusting the bite point as Avid or Formula systems.

The servo wave lever is pretty impressive mechanically at delivering power and is slop free due to the captive design of the system. The lever pivots a bit higher than previous Saint levers and it took some tweaking of bar positioning to get a good spot. Some considerations with the new Saint Servo Lever

The brakes did provide a good bit of ambient noise during use, so if there was one key area I’d like to see improved it would be in quieting the system through pad compounds and / or rotor design. Additionally a more usable free stroke adjustment (versus using the bleeding process) to help dial in where the pads engaged the rotors would be a welcomed addition.

Overall the brakes are some of the most powerful brakes we’ve felt to date. They pack a ton of power and have been reliable to say the least. The lever engages at the same point no matter the situation which is impressive. It helps instill confidence in the system knowing that it works. Once up to speed, modulating the brakes was an easy affair when accustomed to the way the power came on. The immense power of these brakes might seem overkill for some riders (especially on an initial lever pull). Some riders may find themselves sizing down in rotors or seeking alternative pads as these brakes are very powerful. 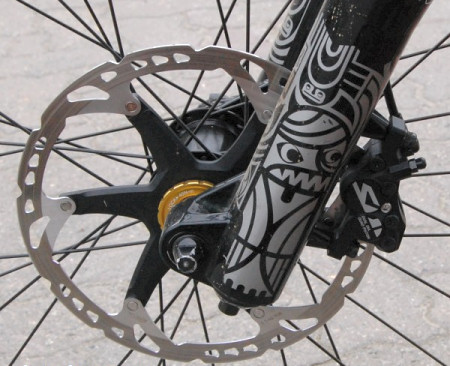 The bite / lever point I found most beneficial was setting them to engage close to the bars. This gave the system as a whole a really good feel and was easy to control the power. Since the brakes are so powerful, it’s easy to brake later in the trail, which lets you carry more speed into sections of a track safer. These brakes are the real deal if you’re looking for immense stopping power that won’t fade.