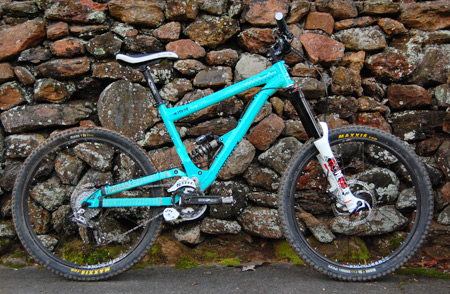 Commencal went on a whole new route when they set out to redesign the 2009 Supreme bike this year.  Previously called the Mini-DH, the Supreme series takes its place for 2009.  In the wake of the Supreme DH’s new contact system, the Commencal Supreme sees similar changes to its suspension system.

In addition to a new linkage actuated single pivot suspension system they also were able to significantly lower the center of gravity, increase seat post adjustability, lower the top tube by 20mm, increase the travel to 6.3” (from 5.9”), as well as increase the shock stroke to 2.25” (from 2”).

While the suspension numbers might not seem significantly different, when combined with their new linkage system, it allowed them to create a better suspension system. It mainly lowered the average leverage ratio that lets the rider run a lighter spring as well as being able to increase the traction of the rear wheel by tuning the linkage system.  The overall combination of these changes essentially make up their contact system.

Available in a variety of builds that all run off the same basic chassis (as well as frame only) Commencal has plenty of options when it comes to picking the right Supreme to suit your budget and needs.

Inside we take a look at the Commencal Supreme 1 which is their top of the line Supreme build.