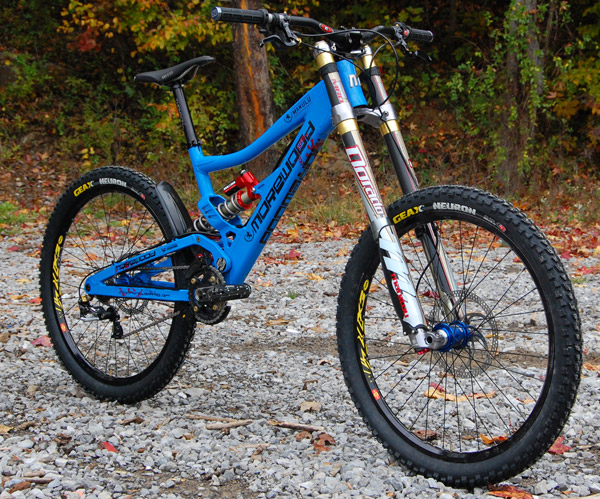 Morewood sought to create something a bit unique when they set out to design a new downhill bike. The Makulu was designed to be a top of the line downhill bike and sit above their other downhill bike the, Izimu, as a purebred race machine. Designer, Patrick Morewood, knows a thing or two about designing a downhill bike and the Makulu reflects just that.

Designed and hand build in South Africa isn’t something most bike companies can boast but Morewood can. Like anything that comes out of the Morewod facility, the Makulu went through several iterations before they were fully satisfied. The Makulu represents a lot of hard work between BOS and Morewood to create a killer downhill bike.

The Makulu on the surface might look like a normal downhill bike but once you take a closer look and throw a leg over it, that idea is quickly thrown out. The Makulu features 8″ of travel, just like their Izimu, but is an entirely different bike. The Makulu is a single pivot but features a linkage actuated design to control the leverage rate. The Morewood Makulu features their low leverage advantage by using a whopping 10.5″ x 3.5″ shock to deliver 8″ of travel. At a rider weight of 180lbs (81.7kg), the BOS Stoy uses a 200lb spring which is something to consider if you’re a really light rider.

Unlike a lot of other bikes out there, Morewood sought to design something a little bit different and they use a pull link instead of a push link. According to Morewood this is a better setup than a push link as less forces are exerted on the linkage and other members.

For headset duties, we opted to use the Cane Creek XXC Flush II headset. The headset is pretty lightweight and offers a nice low stack height. The bearings are protected pretty well with the system. The bearings themselves don’t press into the cups however and just drop in there. We’d recommend using some grease in between the bearings and the cups to help make sure things stay quiet and smooth. Insertion depth with the cups isn’t the deepest with the XXC Flush II setup but we’ve had no issues with it. 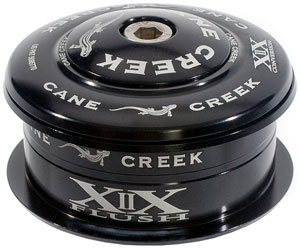 For the suspension up front we bolted our Manitou Dorado. This fork has been through the ringer on a few bikes and still is a top performer in our book. The carbon design is certainly a spendy option, but for 2010 the Aluminum Dorado Pro is available that lets more consumers experience most all of the Dorado benefits. The hydraulic bottom out circuit, the TPC+ damping, and their air system work quite well in unison with one another to deliver a plush ride that is still controlled throughout the entire range of the fork. Each click in every adjuster has distinct positive clicks. The major downside that most consumers face with a fork like this is price. 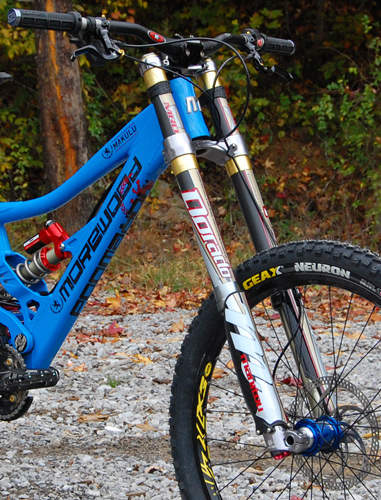 For the rear shock, we opted to used the BOS S**toy shock and equipped it with a 200lb DSP titanium spring. The shock itself has been quite impressive. On the Makulu they recommend running a bit more sag than normal to really let the damping do its job and boy does it track well. The adjustments are pretty simple to dial in and BOS has a few tunes to suit various bikes so the adjustment range on this shock seems just right. Adjusting the rebound is done by a small knob, LSC is done with a screwdriver (or a dime also works nice in a pinch), and the HSC is adjusted with a wrench. Each adjustment has a positive click to it as well. The feeling of this shock is one of near complete control and shines when it’s pushed hard. No special tool is included to adjust this shock and room is pretty snug in this area but there is just enough room to get small tools in there. 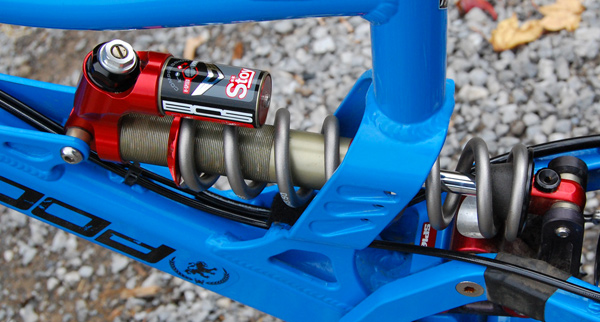 For the stem we used a Straitline 50mm direct mount stem. CNC’ed in Canada and now features some shiney coned bolts. The stem has been stiff and sits pretty low. The stem was pretty much set and forget after it was bolted on. The Dorado crown has the same stem mounting pattern as a Boxxer so mounting up any Boxxer stem is pretty easy. The Dorado’s big stanchions come up through the crown quite close to the handlebar so if you like to set your bike up low the bars will be close to them. 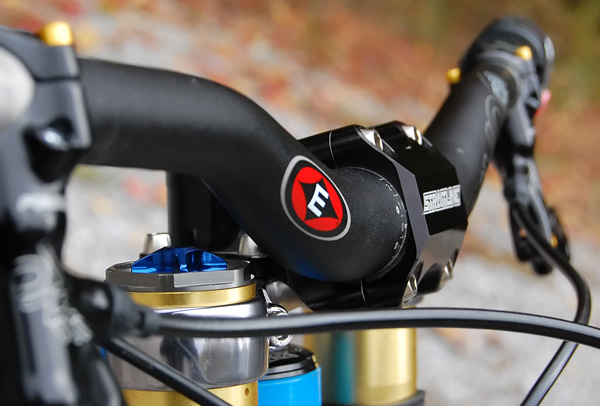 For the handlebars, we used a set of the Easton Havoc 30″ bars. The bars are clean, have a good sweep and rise to them, and just plain work.

For the grips we used some Sunline Half Waffle grips. They feel great and offer a good amount of cushion and thickness. They can wear out a bit fast in our experience but we like them just the same. 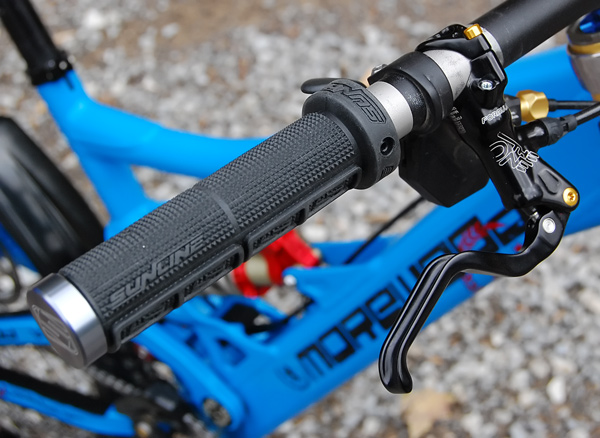 For the brakes, we bolted up a set of the 2010 Formula ONE hydraulic disc brakes. Gone are a few external adjustments this year on the ONE brake. No more tool free reach adjust (a 2mm wrench is needed now) and no more pad contact adjustment (FCS). What they’ve changed is the lever itself. It takes a lot of cues from the R1 lever and sees significant weight reduction as well as a better / stronger master cylinder that is a bit easier to bleed. In addition to that, the lever actuation feels quite a bit more firm in comparison to last year’s ONE’s. Additional weight was also saved in the rotors and lever hardware. You’ll be hard pressed to find a brake this light and powerful from any other brake competitor. 200mm up front and a 180mm rotor in the rear. The Makulu has a 180mm post mount rear disc adapter already welded to it, so bolting on the rear brake only took two bolts with no adapters. 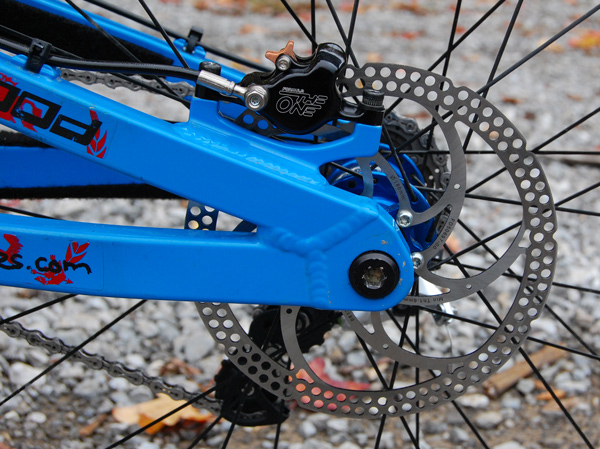 For drivetrain duties, we ran almost a full Shimano Saint setup. Short cage derailleur, Saint Cranks, and a saint rear shifter. Check out our review on these parts if you want to learn more about them. 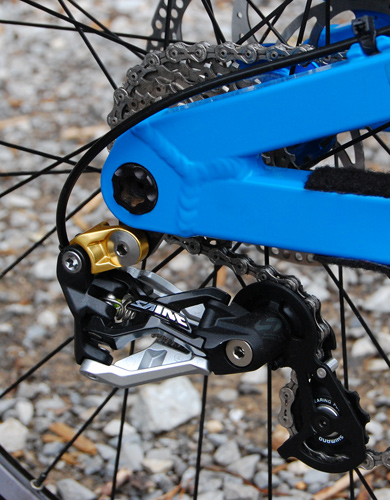 For chainguide duties, we bolted up the e*thirteen LG1+ to the ISCG-05 tabs on the Makulu and never looked back. The LG1+ sheds mud impressively well and just worked well through thick and thin. 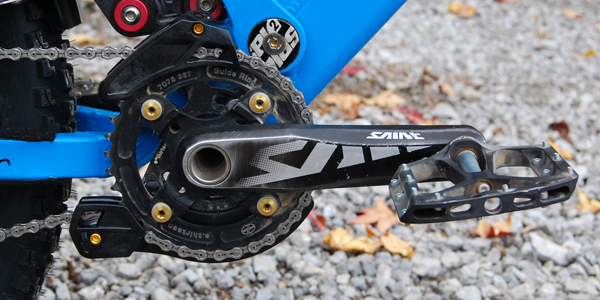 The wheels we used are Chris King hubs laced to Mavic ex721 rims with Sapim CX Ray spokes and brass polyax nipples. The rear King hub uses their ring drive system to offer 72 solid points of engagement. The wheels spin up to speed quickly and are quite responsive. Everything has worked well with these wheels and there’s not much to complain about here! One thing worth noting is that the King ISO 150mm hub spacing on the rear drive side space flange has a bigger gap than any of our other 150mm hubs between the endcap and where the cassette ends. 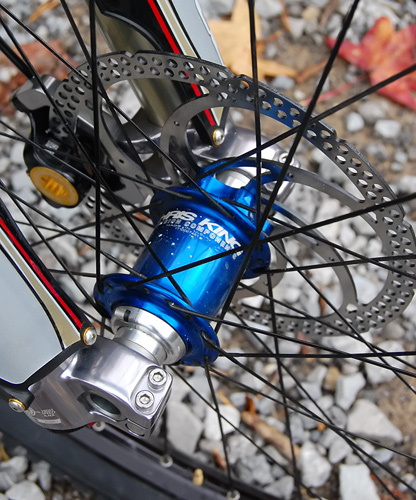 Geax isn’t new to the tire game by any means, but they’ve certainly stepped it up recently for the gravity riders. They’ve got a lot of new tires on the way in a few different compounds. The tires on this bike are the Geax Neuron. The tire casing is their wire bead DH setup and features what they call Tubes No Tubes (TnT) ready. This means that they’re ready to be run tubelessly with sealant or with a tube. For our application here we are running them with tubes. The tire Neuron tread profile excels in drier conditions. The Neurons find traction well in dry conditions and have good penetration. They wear quite well and don’t fall apart after one ride. Their current tire compound (2c) on this tire isn’t quite as soft as a Maxxis 40d or 42d tire. We found these tires did quite well at holding and getting up to speed but we would’ve liked to see a softer durometer tire option as well. Geax has some 3c compound tires on the horizon to look out for which should help out!

For the seat post we opted again to use a Thomson Elite seatpost. Thomson makes one of the best seat posts around and they’re our go-to seat post it seems. For the saddle we used a WTB Silverado. It has a good amount of cushion to it, has a nice slender feel, doesn’t hurt your thighs when you need to grip it, and overall it worked well for us. 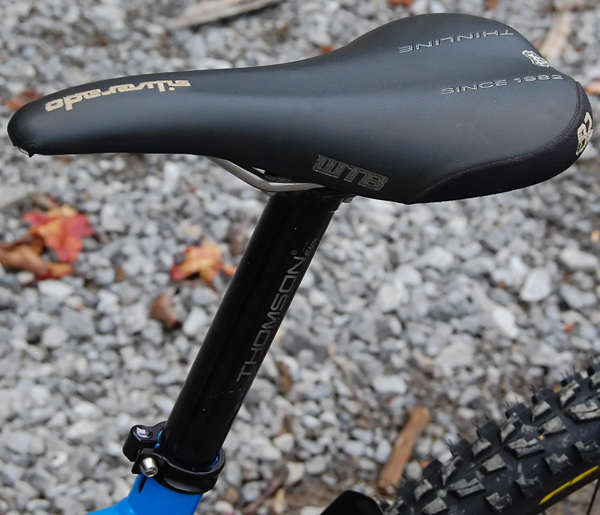 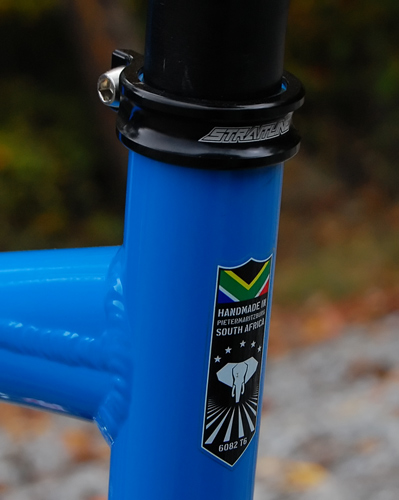 For the pedals we bolted up some of the new Point One Racing Podium pedals. They’re lightweight, thin, and have a unique look to them. They sit pretty close to the crank arm and we’ve been quite pleased with them so far. They have a nice feel to them and the axle although visible, isn’t felt by your feet. The hardened pins have proven to be resilient to bending and the body overall has taken a beating and keeps on ticking. The downside of the pins however is that they use an English sized allen tool. Overall these pedals are great and are a nice finishing touch to the bike.

This wraps up our build on the Makulu. Total build as you see it above – 37.38lbs.