The Amp is Banshee’s long awaited hardtail dj/4x/slalom frame. Banshee has essentially retooled and geared themselves to contend with the best of the best. The Amp is a lightweight frame that is purpose built to handle dirt jumps and slalom type tracks. Two sizes are available (Regular and Long). Logo-ing is minimal (they do give you some decals to apply should you want to) and comes in a clean brushed finish that is clear coated. The Amp has a suggested retail frame price of $500.00 USD.

Check out our full review to find out the different builds we used on our AMP as well as our thoughts on its performance. 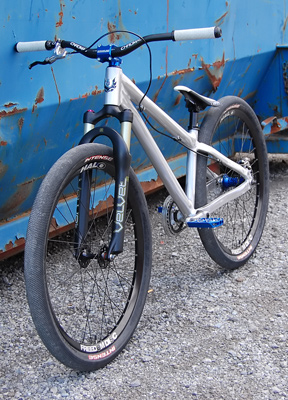 We’ve made some progress with the geared version of our Banshee AMP and here’s the update.

For the fork we wanted to get a fork that could be used on a variety of upcoming projects and one that had some quick adjustability.

We opted for the FOX Talas 140 RLC 32 fork with a 15QR. The fork offers some additional security over a conventional quick release fork. FOX/Shimano claim it is a stiffer interface torsionally and sheer stiffness as well as the hub offering some additional strength (not quite 20mm strength, but stronger and safer than a QR setup).

The Talas 140mm RLC fork features a bevy of adjustments including rebound, lockout (adjustable blowoff control), high speed, low speed, adjustable air pressure, and it can be set quickly to 100mm, 120mm, or 140mm with the flick of a switch. The fork also can be lowered further if needed with the supplied internal spacer.

The fork features a 15mm thru axle that is easy and intuitive to use. It provides a more secure setup compared to a quick release fork. The debate of 20mm vs 15mm is something a lot of people are interested in and while 20mm is stronger & stiffer, the 15mm for us mainly offers additional security over a quick release fork. In a sue happy world, it’s a good idea to have 15mm forks replace QR without having the confusion of if a 20mm fork is heavy duty or light duty. 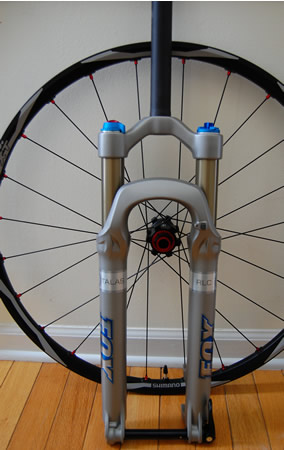 The wheels we opted to use are Shimano’s XT 15mm wheelset. The wheels are tubeless as well which we plan on utilizing on future builds. We are using tubes for our geared setup on the AMP. Shimano improved the engagement on their XT hubs to 36 points of engagement via a similar setup as the XTR freehub. The wheels use a cup/cone setup that is often found on Shimano hubs and they’re quite easy to maintain with only a few cone wrenches and some grease. The wheelset is quite light and solid which will help accelerate the AMP.

For the chainguide we opted for the MRP Mini-G guide. It is a smaller version of their G2 but accepts 32-36t chain rings instead. Tyler at twenty6products.com anodized our backplate blue to match our AMP.

For the rest of the drivetrain we’ll be using a road cassette (11-21), an XTR rear derailleur, and a Saint shifter. The Saint shifter works quite well on a bike like this because the paddles are short and stay out of the way when you don’t need them. It’s easy to flick down gears when you need to without having to remove your hand from the handlebar.

Lastly we wanted to make a decal for the down tube and Rufus ([email protected]) made two custom down tube decals for it. He can make just about any decal. Look to see more of his handywork on a few other upcoming projects as well.

Let us know which down tube decal you like the most by leaving a comment here and we’ll put the more popular one on it. 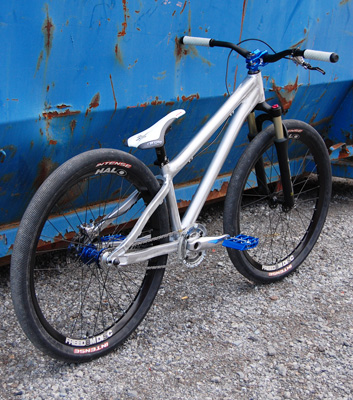 The AMP takes an integrated headset (campy style, 45/45) so its easy to get the bars low if that’s your desire and gives a pretty clean aesthetic look. It enables the user to fit the bike to how they see fit and it was easy to setup the front end quite low. The bottom bracket is a euro 73mm shell. Banshee was considering press type fit BB as well but that didn’t happen for various reasons. The AMP’s bottom bracket sits quite low and really is easy to rail and maneuver about at will. The has been bike is solid and stiff to say the least. Changing directions with the AMP requires minimal body english. 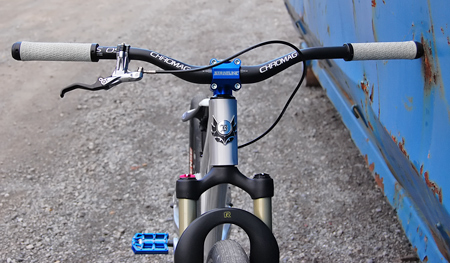 Chad at RedBarnBicycles built up this wheelset for us. He did a great job and they’ve held up very well. The key to a strong wheel, is a good wheel build and Chad did just that! The spokes used are straight gauge DT spokes / brass nipples and Halo Freedom rims (same as Syncros DS28 for those who care). Profile Rear MTB Single Speed Hub and a Velocity front track hub. 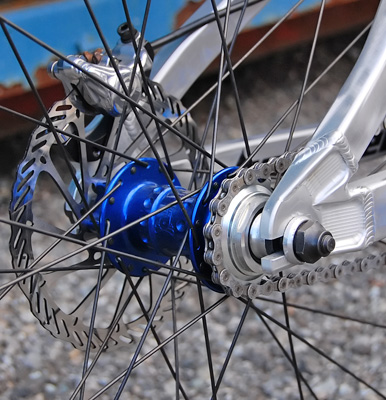 For our single speed setup, we’re running a 32 – 15 geared setup. The cranks on the single speed setup are polished XT cranks paired to a blue rear 32h Profile Racing single speed MTB hub. The Profile Racing rear single speed hub has some very nice features to it that let you run a micro gear (9t – 11t) or run a ti or steel driver setup if you want to run loose cogs instead (12t – 18t). The current configuration we’re running a steel driver with a 15t cog. You can run their bolt on setup (shown here) or quick release. The Profile hubs come in a rainbow of various colors to suit just about anyone’s tastes. The chainline can’t be tweaked too much which is the only downside of the drivers. Check out their website profileracing.com for more information on their stuff. 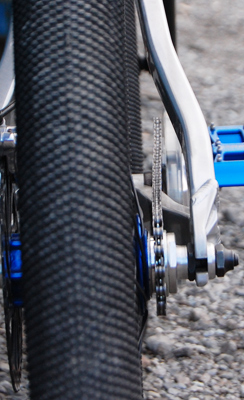 The front hub we opted to use a track hub since we were going to be using a quick release fork. We opted for a non-disc hub since this was a more dedicated rear brake only idea. The track hub is a stiff setup with the bolt on axle and makes for a pretty light setup that has been solid for us (and many others previously). It’s a good idea to run a bolt axle on a dirt jumper instead of a quick release for obvious reasons (strength / safety).

The rest of the bike is pretty clean and simple. SDG I-beam Micro post, SDG I-fly saddle, Intense Micro Knobbies, Chromag Fubar handlebar, and FSA Lock on grips (140mm wide so they give a nice wide area to grip onto over standard lock-ons). 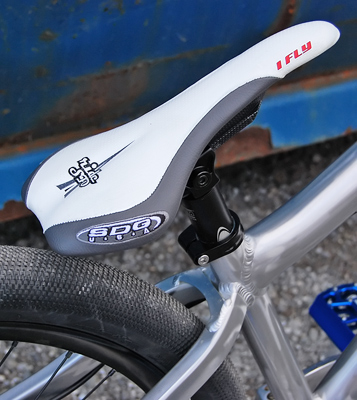 The X-Fusion Velvet R is set at 80mm (can be modified internally to increase/decrease its travel) and it is a smooth air fork. It has worked quite well for us and an air fork is nice for a DJ-er / Slalom / 4x bike as you can add more air to season it how you want it to ride.

The Straitline SSC (Split Steerer Clamp) 50mm stem is up front and looking sexy. Matching blue Straitline pedals as well to complete the subtle yet bold blue look we were going for. 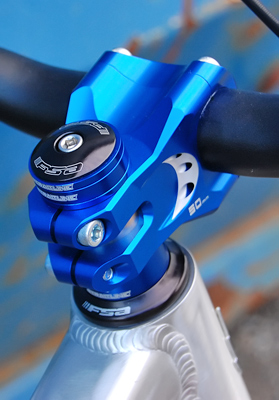 Brake is a Formula Bianco mated to a Avid G3 rotor we had. Initial plan was to run a 5″ disc but that didn’t work out. 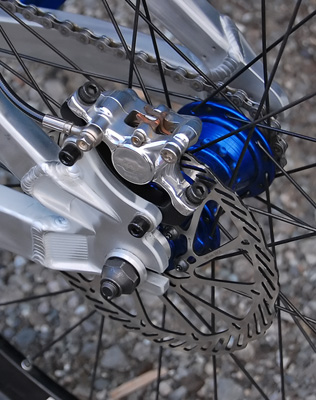 Bash guard is an e13 32t Supercharger. We outfitted ours with black hardware to make sure it looked a little slicker. 32t e13 guidering is bolted up as well. They’re one of our favorite chain ring’s to use. The e.thirteen guiderings come in a wide range of sizes (32 – 40t including odd sized chain rings too!) 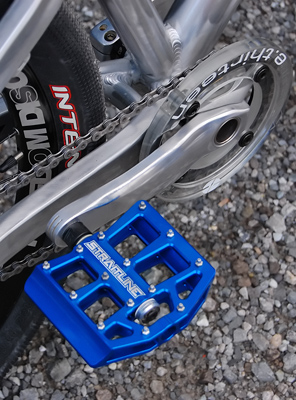 The AMP came out pretty light without any effort really. Tons of little areas to save more weight (lighter tires / tubes / no bash / pedals / bars / etc) if that was the goal but in this single speed configuration it weights in at 24.2 pounds on an ultimate hanging scale.

We’ll update this page more once we get the geared setup finished and then you’ll see a review posted on the homepage. Check out the banshee website and blog for more info on this bike.