The 2011 UCI World Cup Downhill #5 in Windham, NY was as exciting as ever given Aaron Gwin’s recent wins at 3 of the first 4 stops. Typically races are determined by 10th’s of seconds but Aaron Gwin took the win by over 2 seconds giving him his 4th win of the year. Check inside for details.

Aaron Gwin was confidently fast all weekend. He had his lines down early and it showed when he took the top qualifying spot on Friday afternoon.

As a reward for qualifying in the top spot, Gwin was the last man down the hill to try and make history for the USA.

As he set off, it was Steve Peat who sat in the hot seat. When the first split came at Gwin was already 2 seconds faster than Peat and the crowds was quite jovial at what they were witnessing. The home crowd cheered Gwin all the way down the hill.

Being the first American to win a downhill on home soil in 10 years has to feel good. 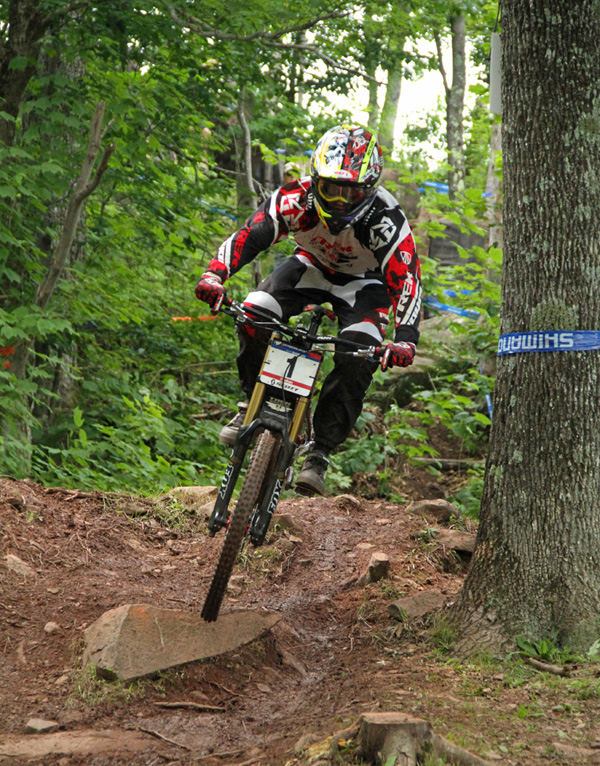 The poor lad flatted in his privateer race and as his penalty he had to write “I Love GWIN” on his chest and upon immediate completion of the race would have to run out and kiss Gwin’s helmet. Although he didn’t get the kiss on the helmet he did get a high five from Gwin. (you can watch him storm in our video). 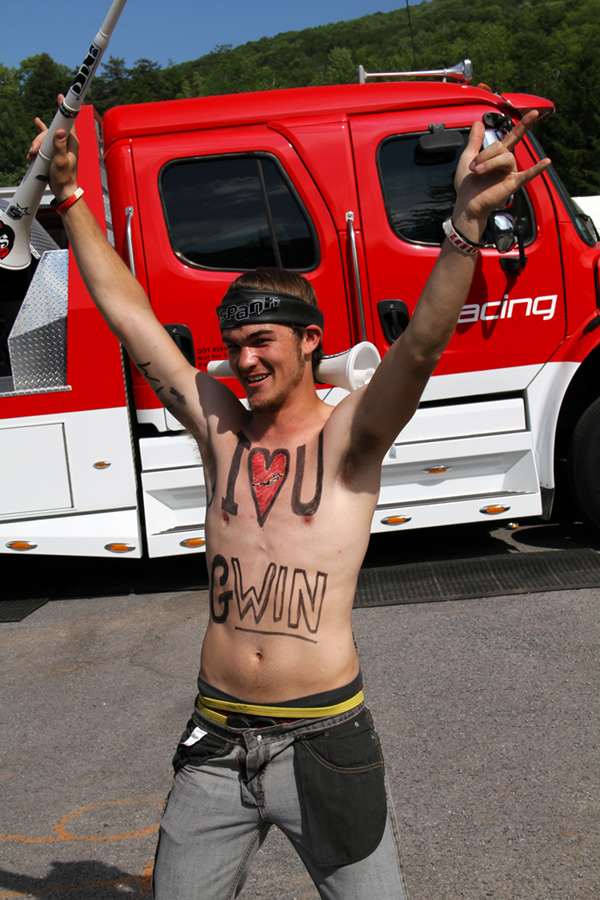 Steve Peat loves to prove the masses wrong time and time again. Last year Peat almost won this race but in the last chute he crashed hard at the bottom after sending the entire section to flat. Windham this year saw it fit to name the section after him. Peat took it in stride in good sporting fashion. He held it together to hold the hot seat until Gwin came down. 2nd place at the end of the day in Windham for Peaty. Steve Peat has now podiumed 53 times in his career. Legendary. 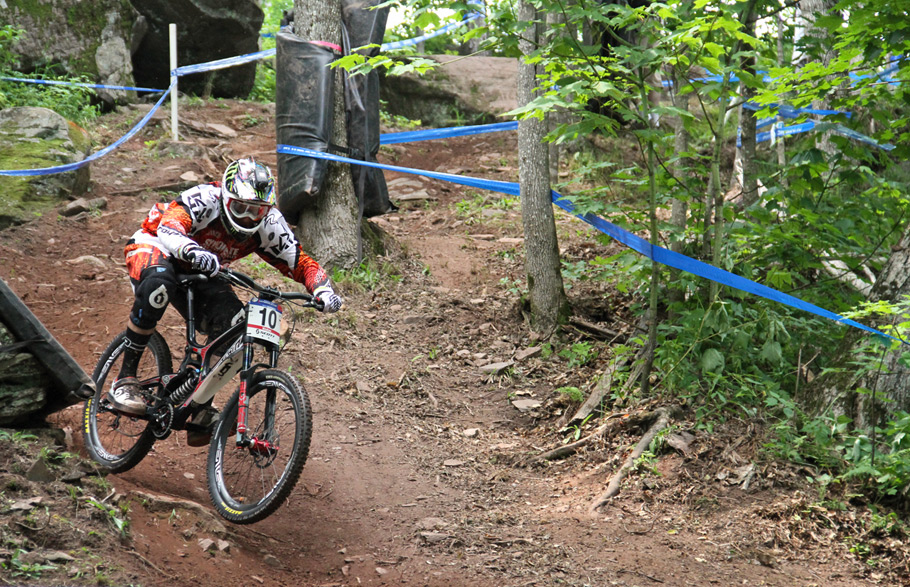 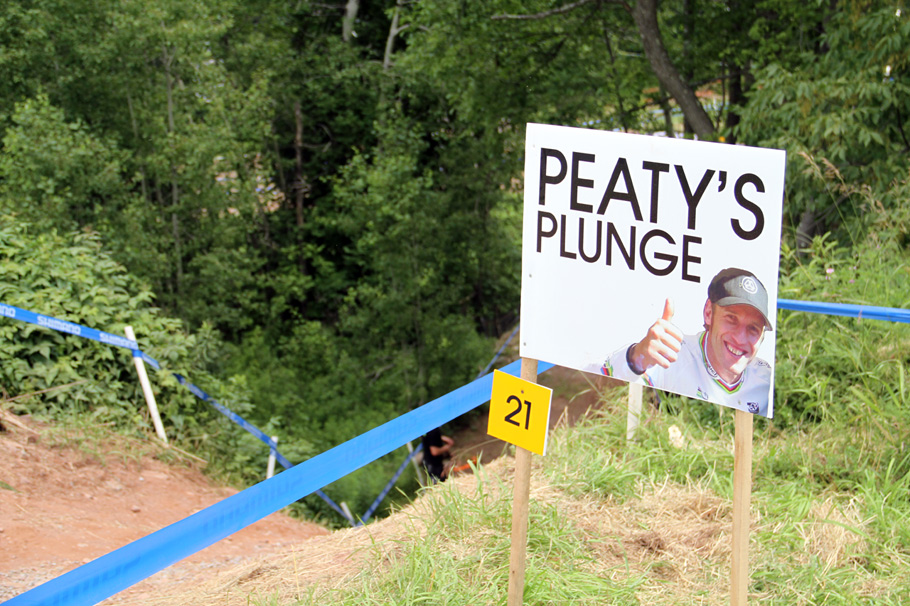 Rachel Atherton showed good form after last year’s injuries during training. She put in a solid run in qualifying and pushed through her race run to take the win over Floriane Pugin by over a second. Current women’s points leader Tracey Moseley came in third. 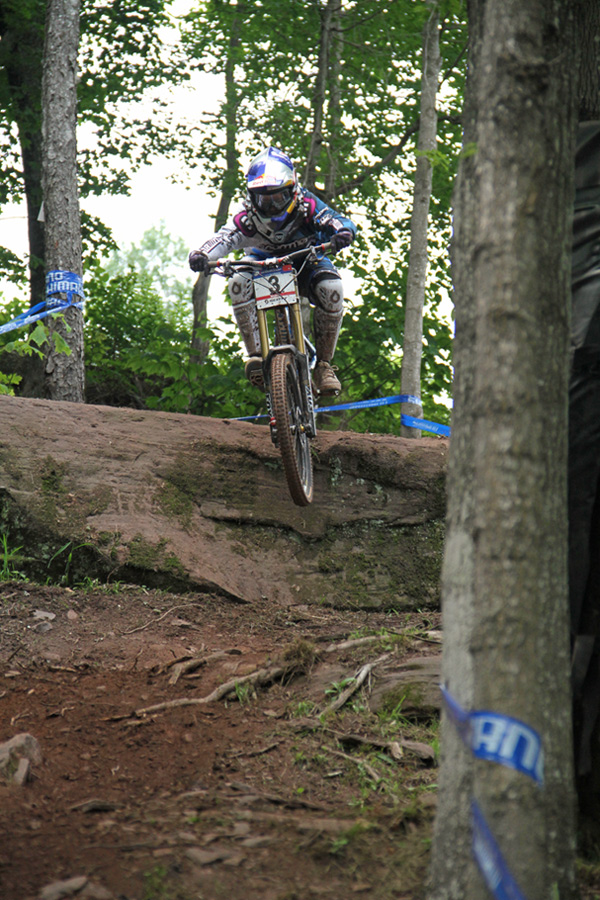 The entire Giant team looked on fire during practice sessions over the weekend. Andrew Neethling put in a great performance during his race run to grab third place. Duncan Riffle ended up flatting in his race run. 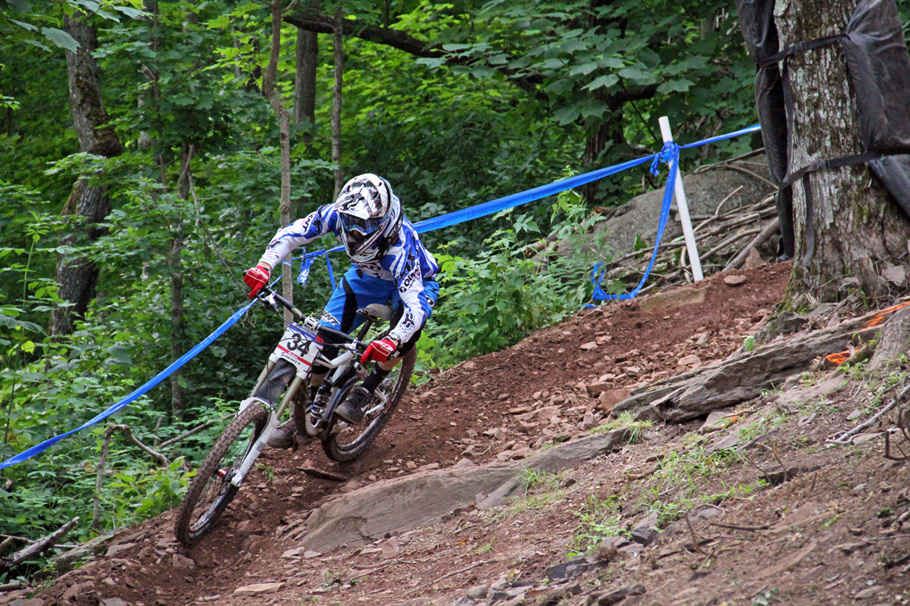 Brook MacDonald has been having a successful year so far. A fifth place overall capped of his weekend nicely. 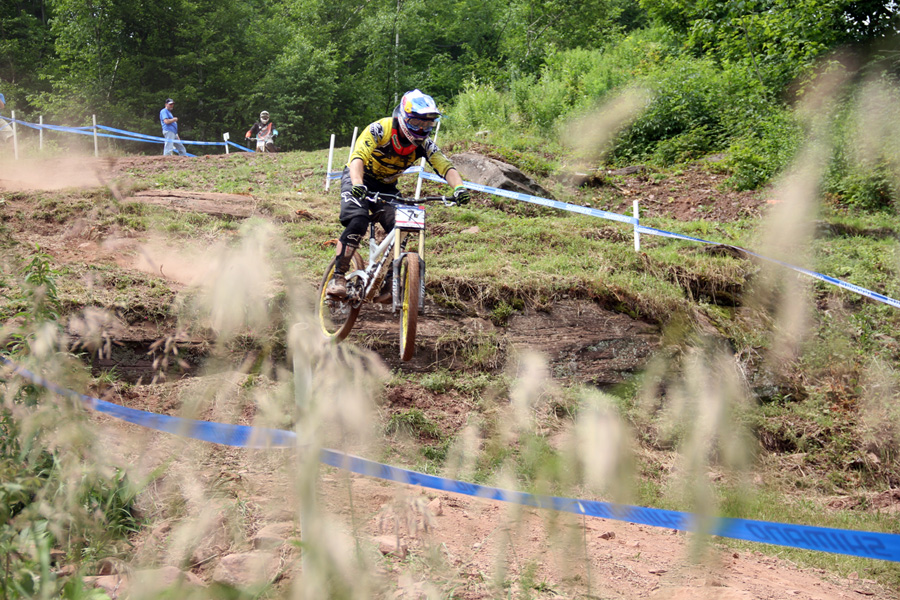 The terrain was a little damp on Thursday but after the sun came out, some sections dried out faster than others adding a bit of a challenge to navigate the terrain. 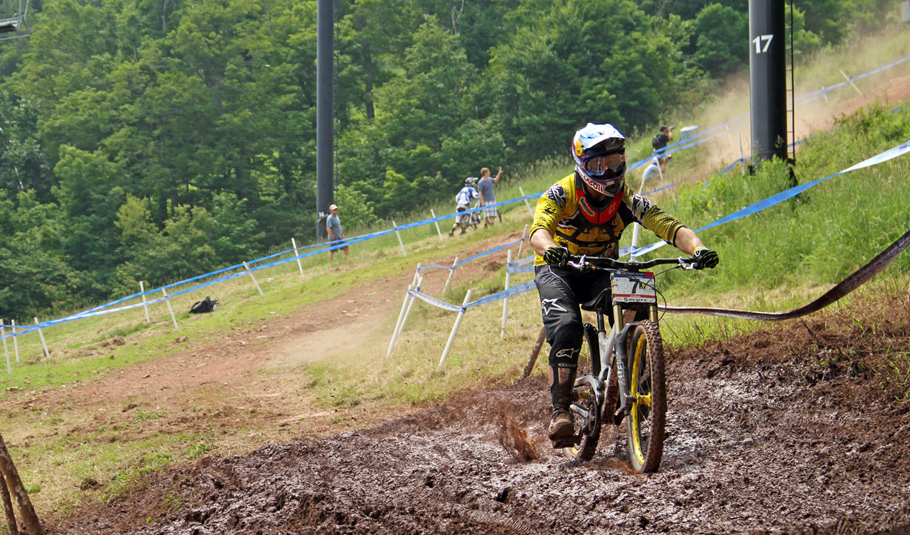 Justin Leov was showing off his style during practice runs. Leov ended up with a sixth place finish. 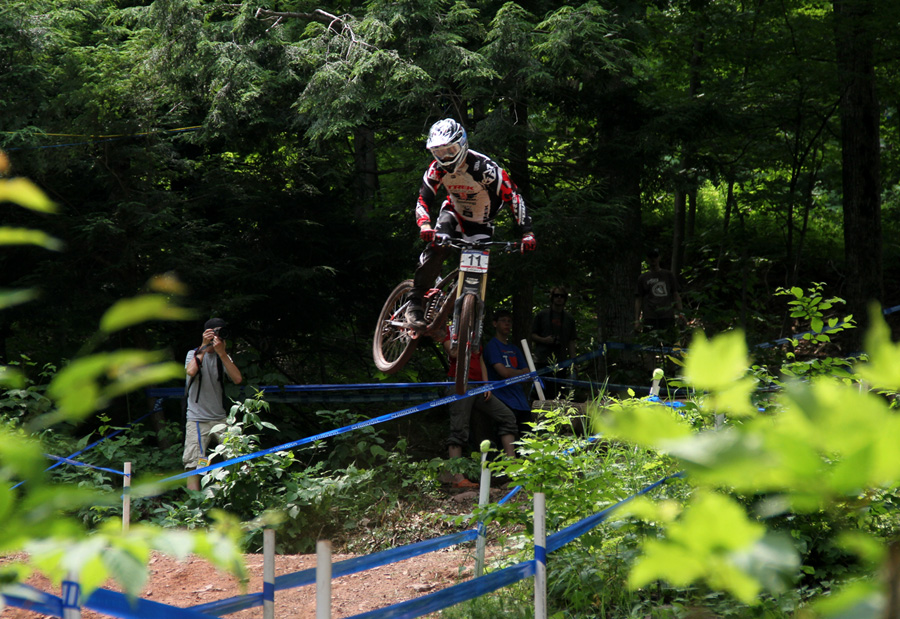 Danny Hart was looking fast and furious all weekend. He qualified well and made a top 10 finish. 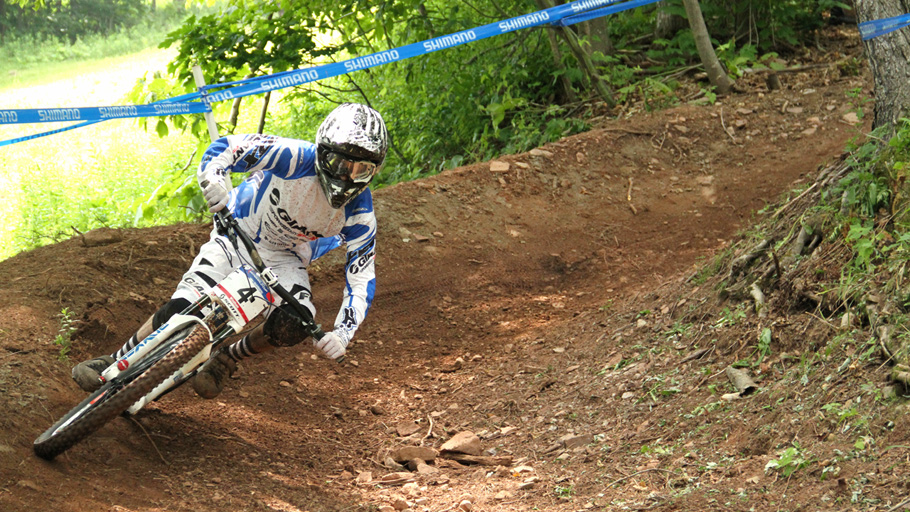 Gee has had a heart breaking year with mechanicals and mishaps. He qualified 2nd but his race run didn’t have the punch needed, netting him just out of the top 10. 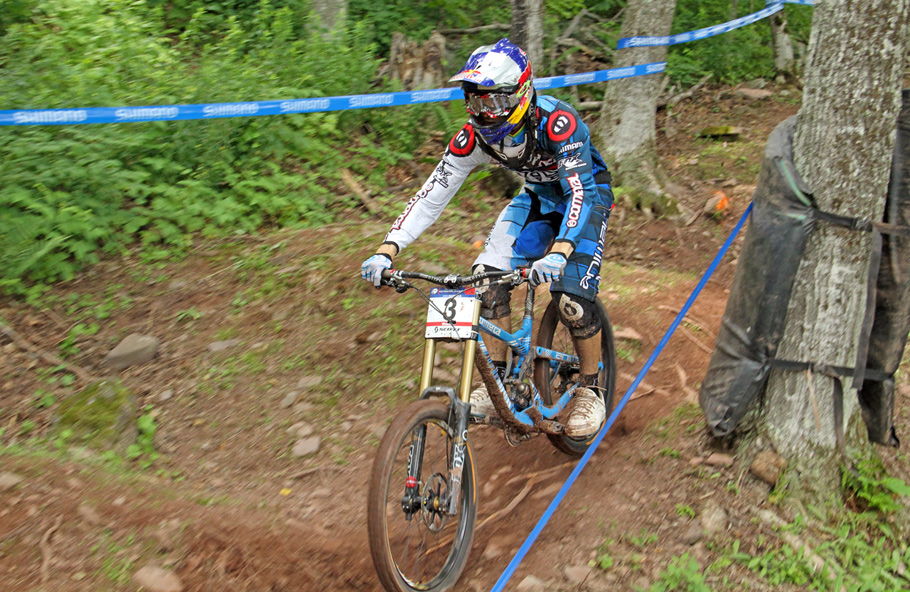 Marc Beaumont was turning some heads during practice and he showed good confidence through all sections. During the race however he didn’t link it all together and finished 16th.

Jill Kintner was representing the red, white, and blue. She seemed to be having a good weekend but her race run wasn’t what she was looking for. She finished 1oth. 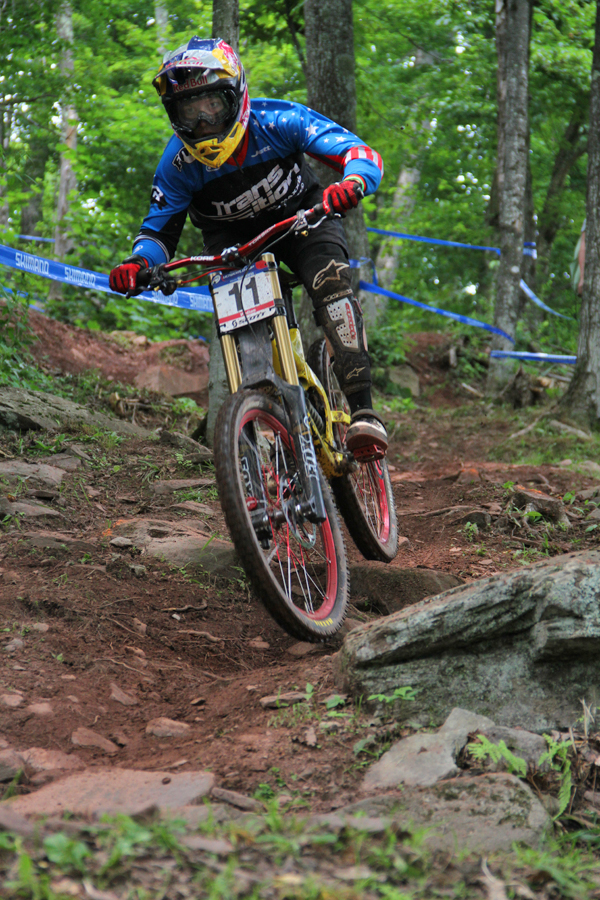 Ben Reid was stomping practice runs as well but didn’t seem to make it stick during his race run. He came in 46th. 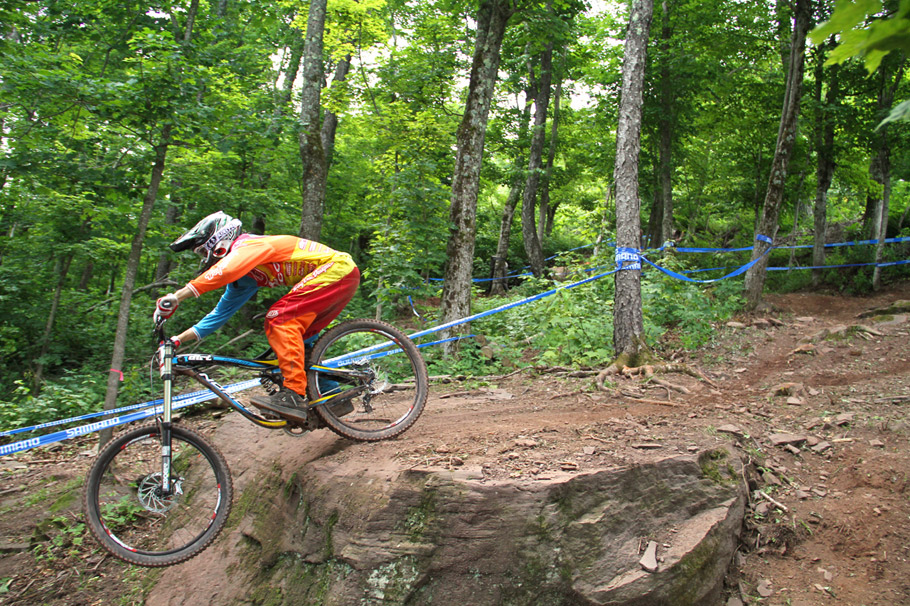 Manon Carpenter represented for the women’s juniors, getting 12th overall. 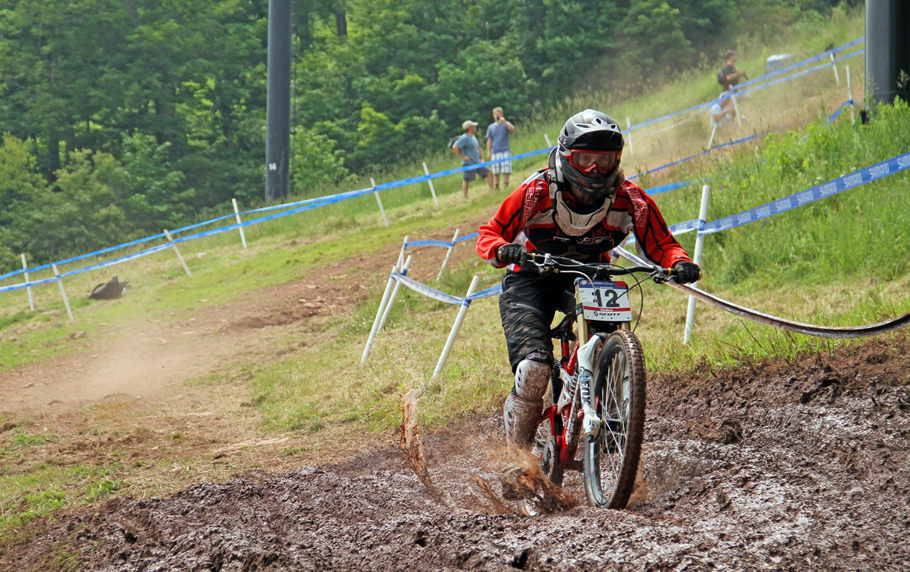 The junior men were out in force during this race. First Austin Warren (23rd) grabbed the hot seat for some time before Lolc Bruni (14th) took it from him. Troy Brosnan (8th) eventually took the junior win at Windham. There were 5 American’s in the top 34 qualifying, 2 of which are juniors. Neko Mullaly took the top American junior spot in 27th. 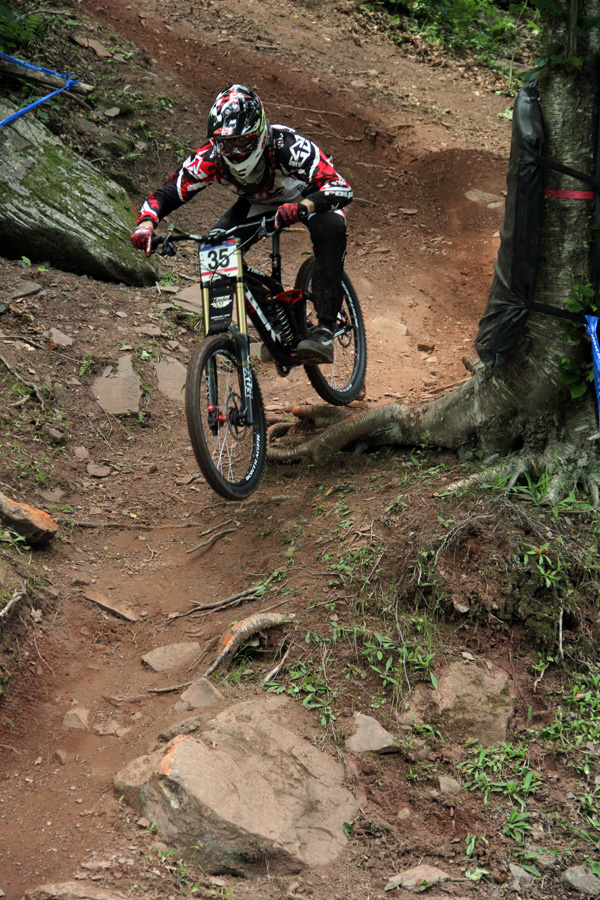 The next World Cup DH stop is La Bresse, France. Gwin leads the overall hunt by a good margin given Greg Minnaar’s last two results. Gee Atherton is in third overall still but will be looking to improve that certainly with only two rounds left in the 2011 UCI DH schedule!