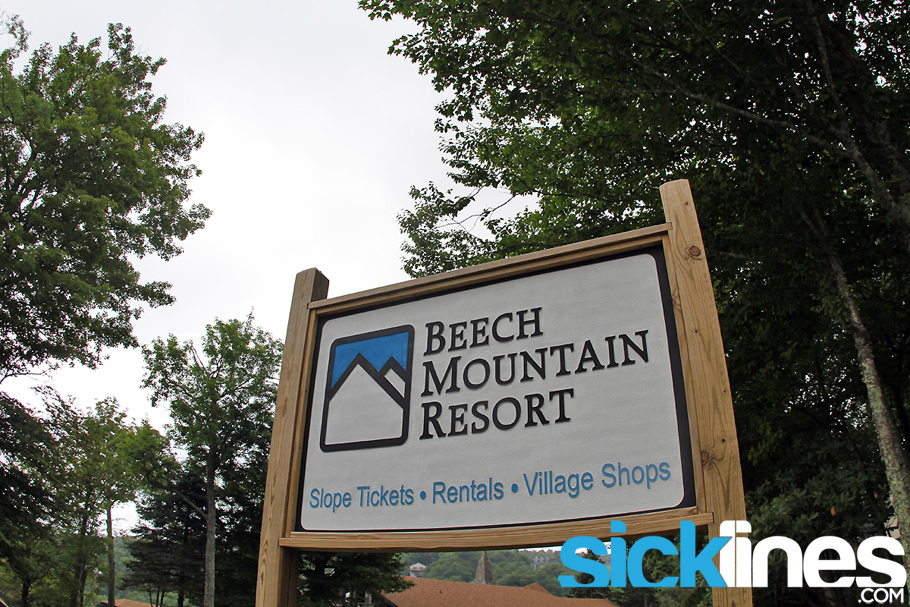 For the second year in a row, Beech Mountain played host to the 2012 USA Cycling Gravity National Championship. Nested away near the North Carolina border, a quiet Beech Mountain offered a nice venue for riders to test themselves against the best.

Throughout the race weekend, the rain would play on many riders minds as it often had many riders on the fence of using spiked tires versus dry tires. 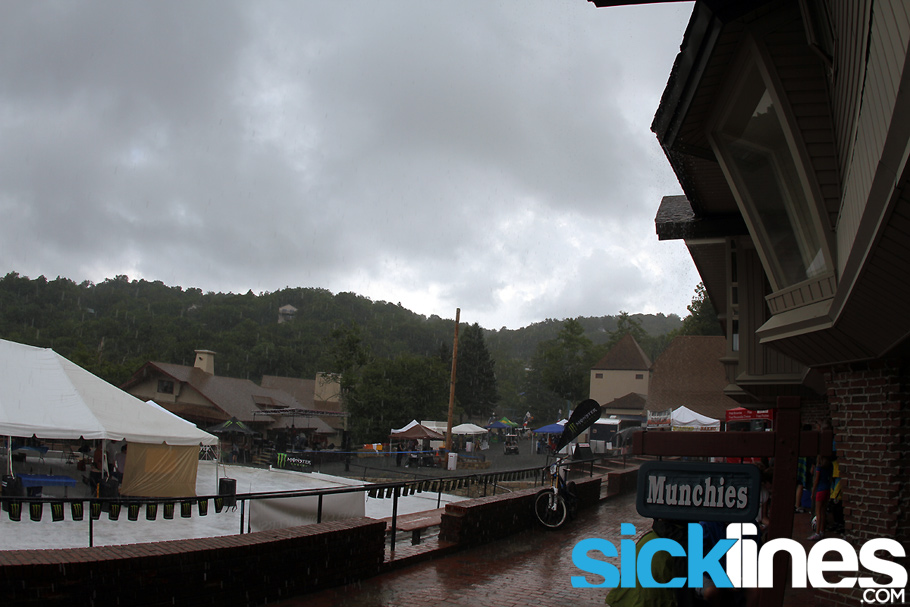 Rain came and went all weeekend

Beech Mountain brought in a variety of food vendors to the mountain to give riders and spectators a variety of options to munch on during the event. Various bike related trinkets were seen around the venue to help the riders feel welcome, like this bike art. 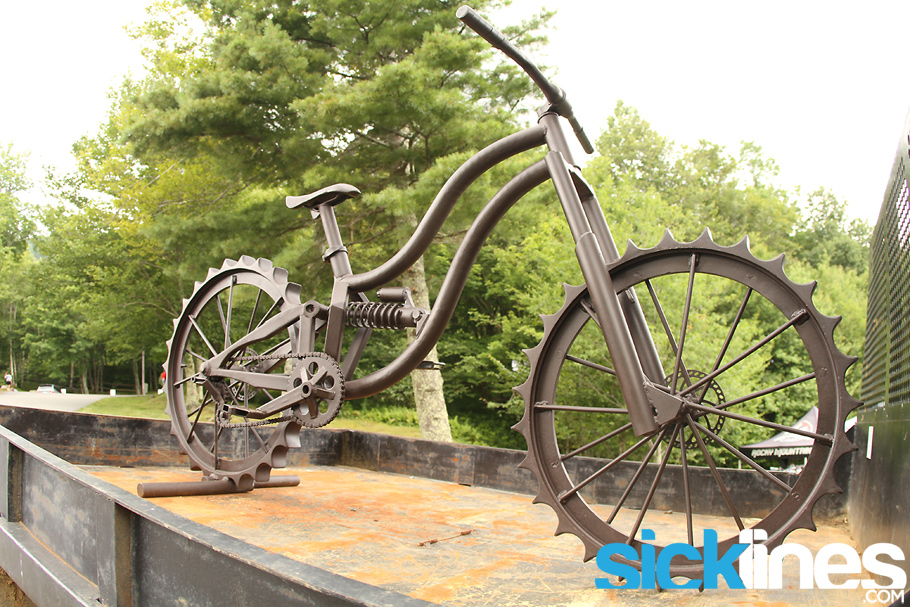 The pits were busy as riders were fixing, hiding from the rain, eating, and more. FOX Racing Shox, Specialized, SRAM, and Shimano were a few of the in bigger pits. This also allowed for sponsored riders support at this National event. FOX Racing Shox was busy tweaking and trying things with their athletes as well including some prototype parts. 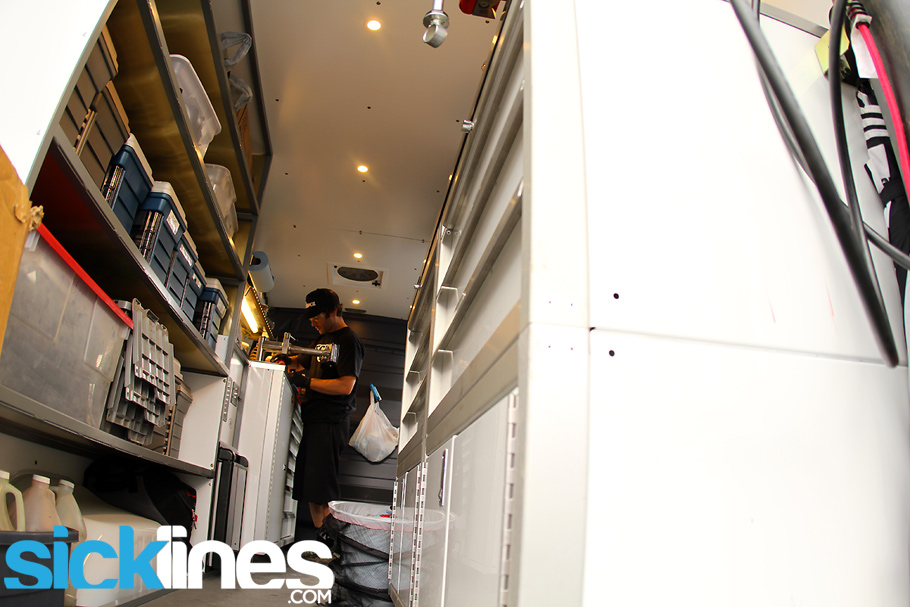 Inside the FOX Racing Shox truck

Early Saturday evening, the Pro dual slalom race took place. Much to everyone’s pleasure, dual slalom was brought back and provided quite a lot of excitement. Chris Herndon sculpted the hill with numerous berms, jumps, and numerous alternative lines for racers to pick their way down. 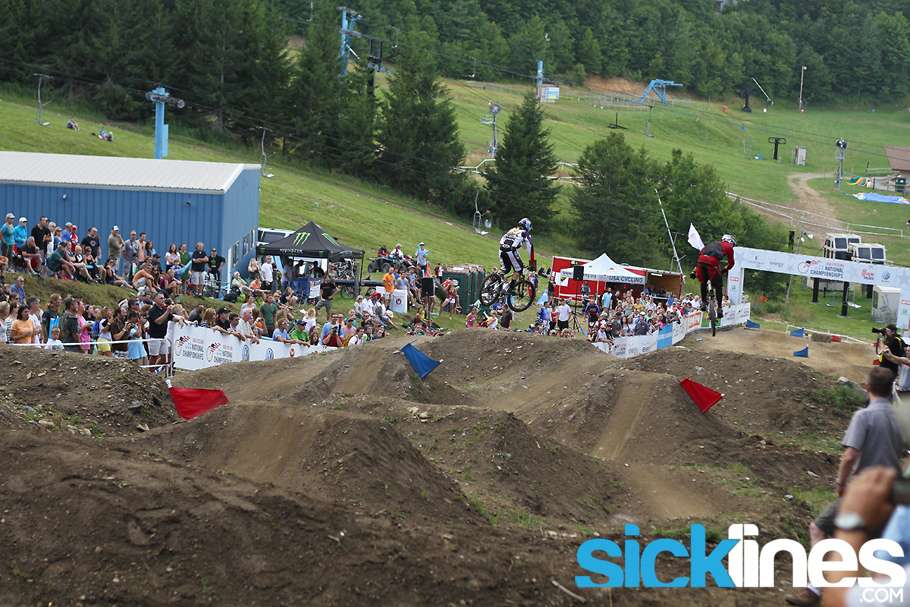 Jumps, berms, and fun to be had on and off the dual slalom course

Alex, a enthusiastic Tennessee racer, brought out a big American Flag on a pole to get racers and fans excited. 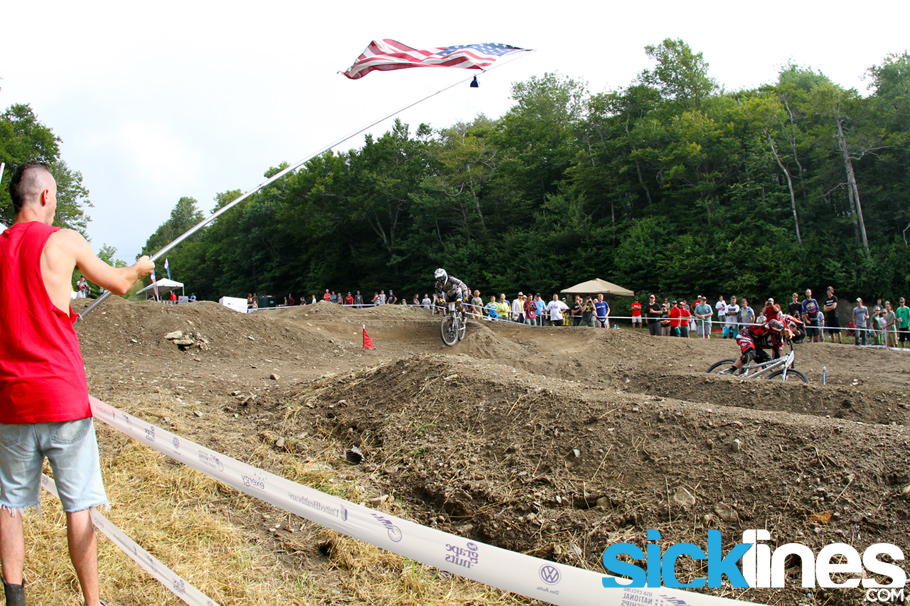 Alex waves the American flag over the slalom course

Neko Mulally went on to win the Pro men’s Dual Slalom and Melissa Buhl took the title for the women. 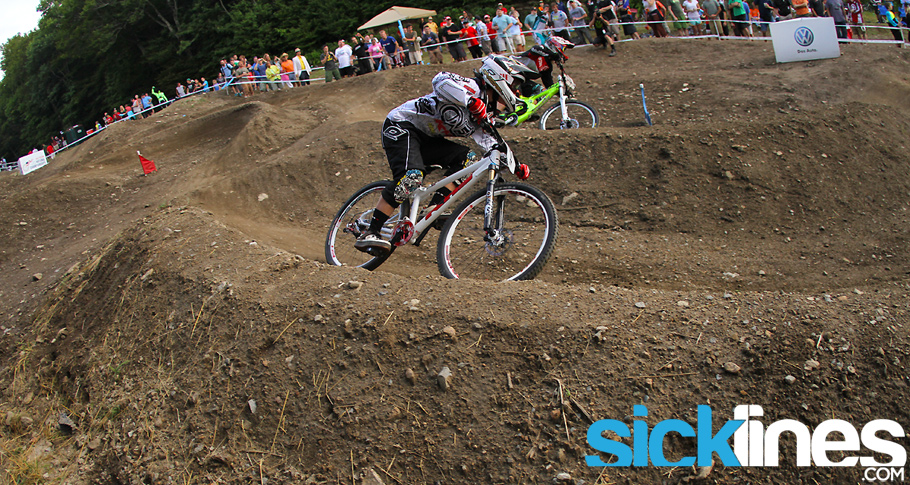 With the dual slalom in the books, the attention turned to the downhill race. Rain fell most every night leading up to and including the night before the race. This weighed heavy on the minds of the racers as they had to battle changing conditions, lines, and tire choice.

The USA National drew the best USA talent with only a few of the fastest USA racers not making it out. When you have a pro field that includes riders like Aaron Gwin, the competition inevitably has to try and rise to the occasion.

This year, the junior riders who had Pro Licenses like Logan Mulally and Austin Warren were allowed to race with the Pro Men. Young Richie Rude Jr. wasn’t in attendance however unfortunately. 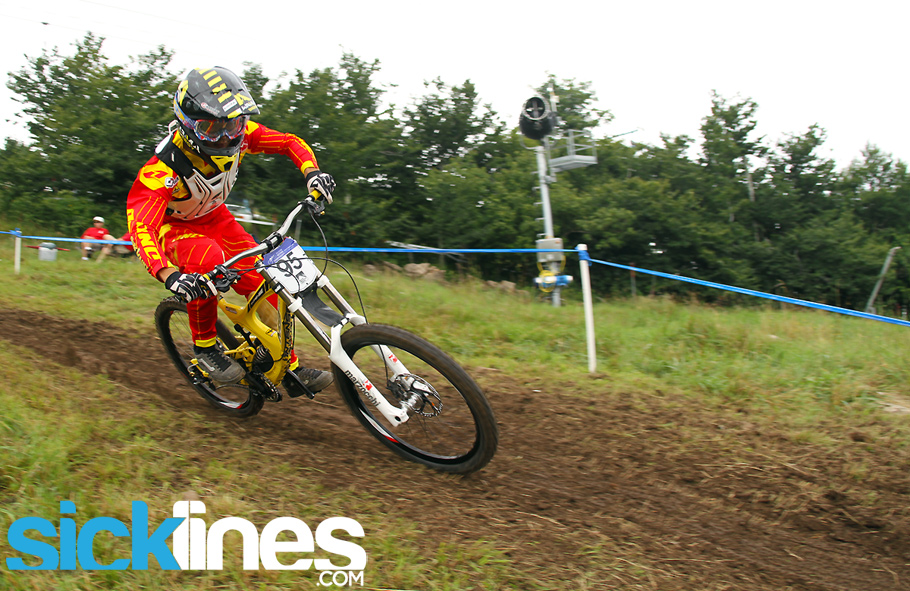 Heading into the woods for the first time on course yield a variety of line choices for riders to pick between if you are looking. 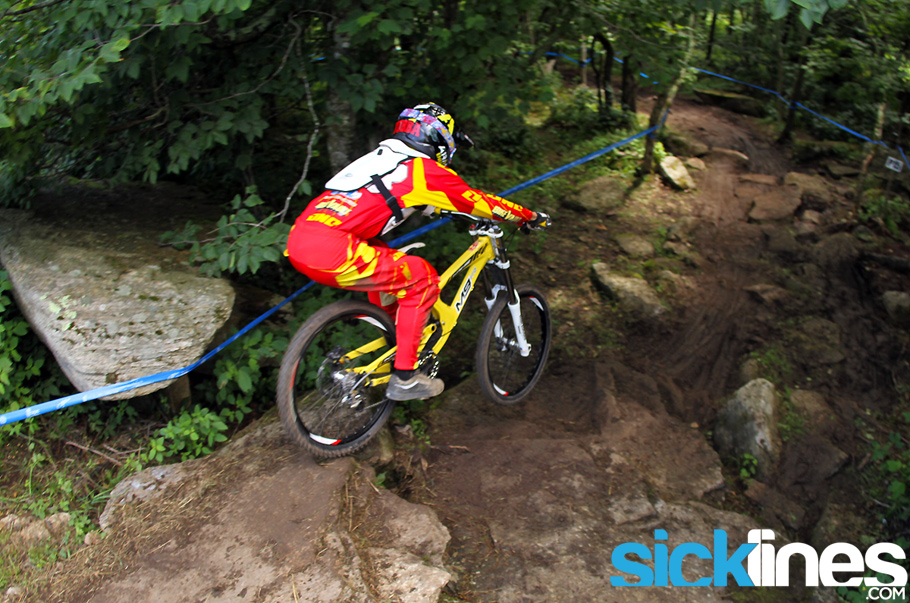 Numerous rocks throughout the course showed signs of wear just like this rock. Pedals, cranks, and bodies were hitting rocks at Beech Mountain. 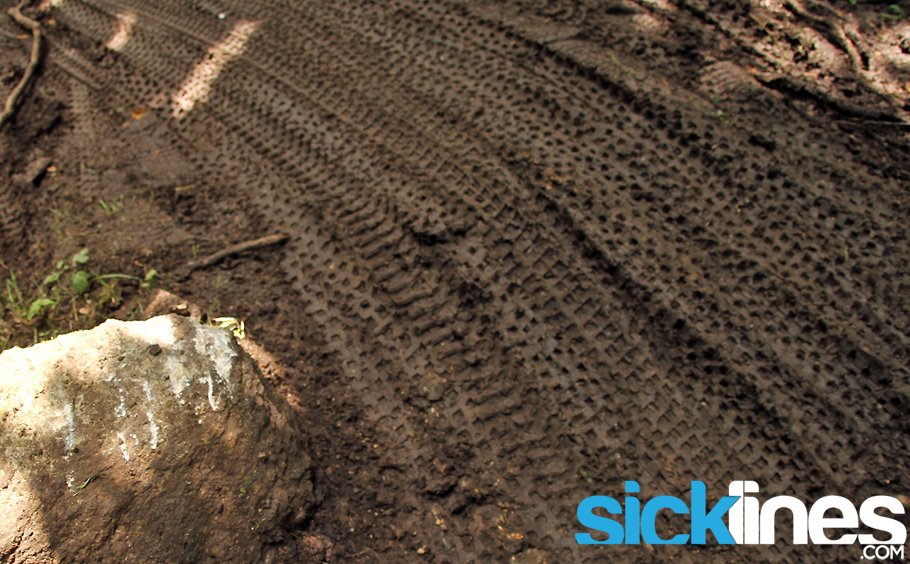 Rocks got hit often throughout the course

The major rock garden presented riders with an option to go left or straight. The left option snaked its way through trees and roots while the middle option presented more rocks.

Riders chose which they felt most comfortable with but the left line was certainly faster if you could ride it. 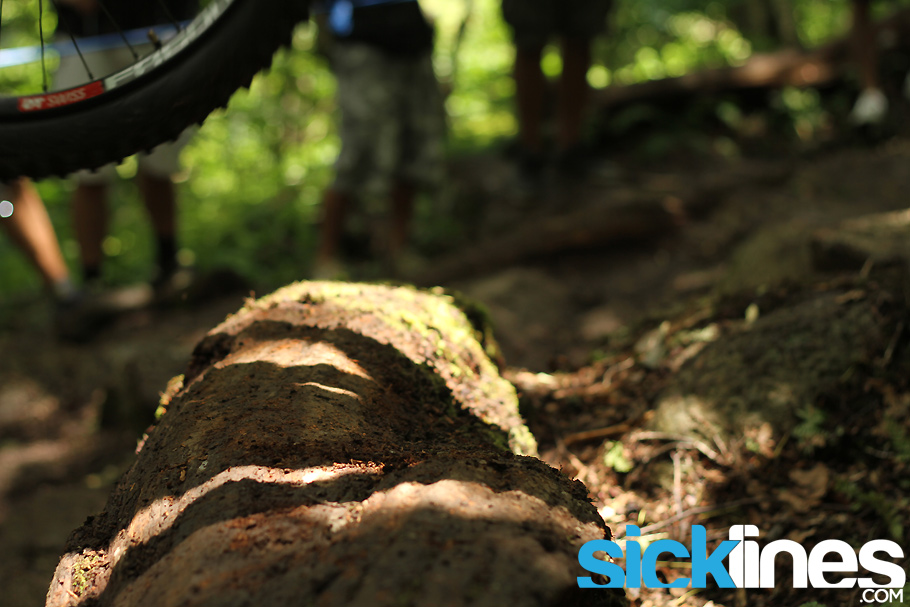 In the event you stalled in the left line, your only real choice was to dismount and hoof it.

Towards the end of the middle section of the race trail this gap over the rock can be doubled or tripled. Luke Strobel chooses the triple route. 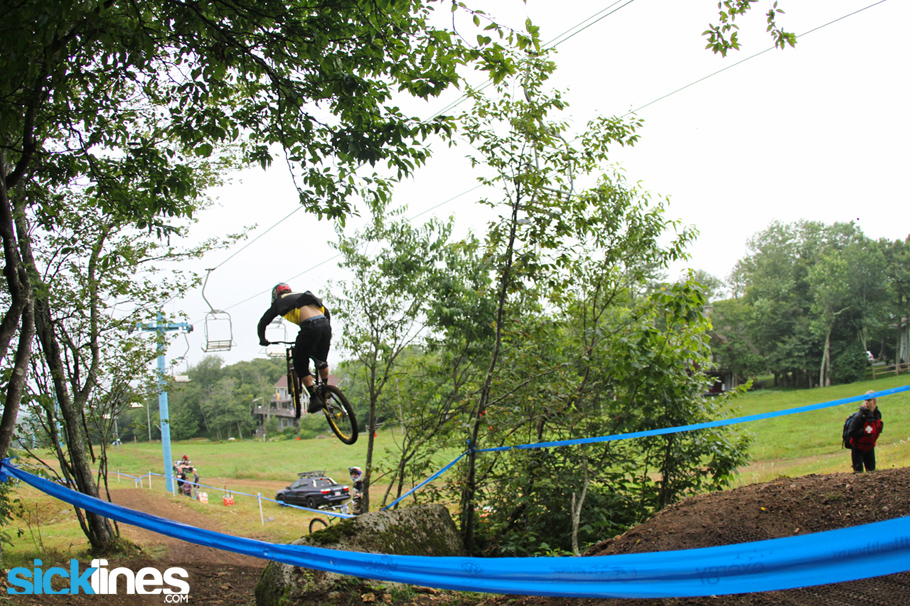 Strobel triples out of the woods over a big rock 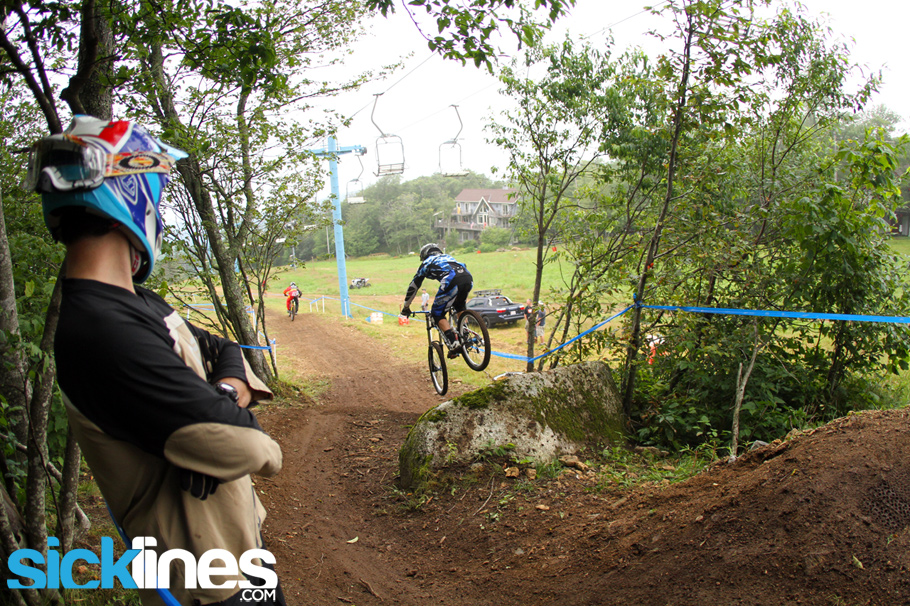 Butch looks on as Geritt doubles over the rock

After that, select riders were gaping again past the flat rock ledge to maintain maximum speed. 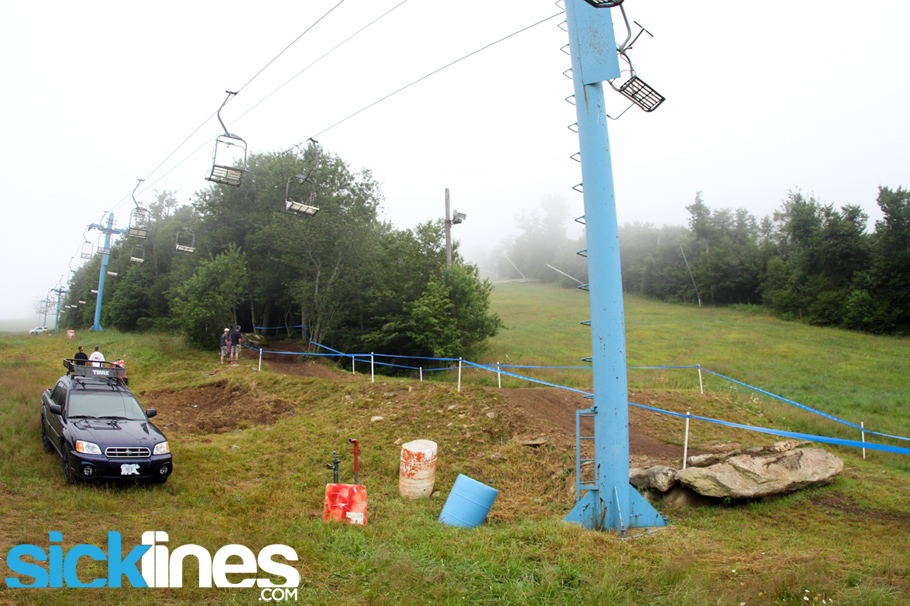 Logan Binggeli, 2011 Pro Men winner battled hard all weekend to try and win again but it wasn’t in the cards for him this year. 4th place with a 2:17.2 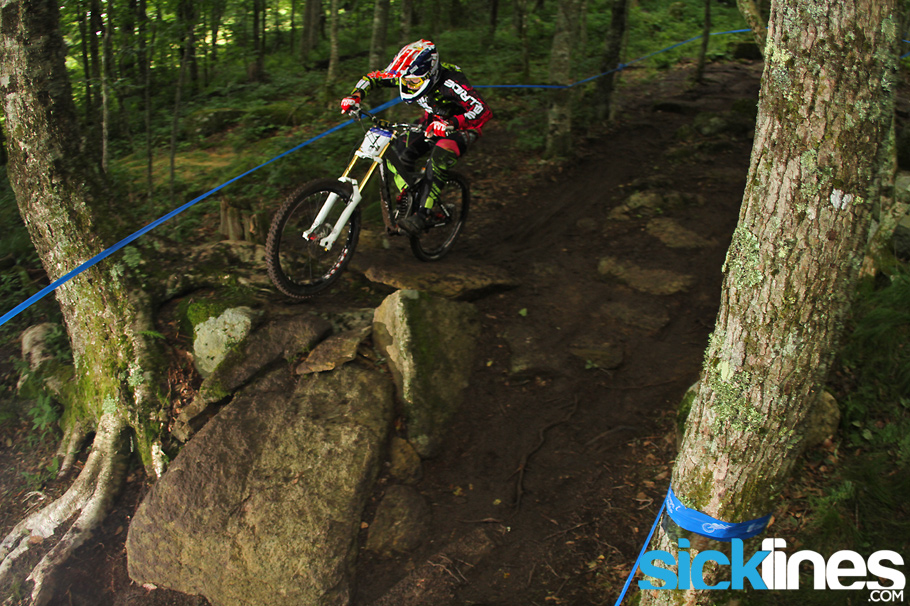 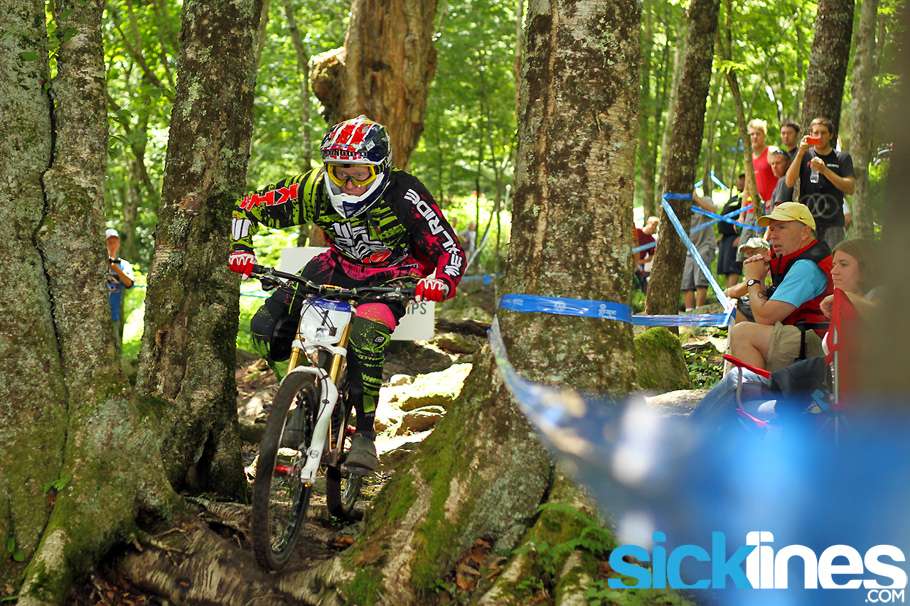 Ethan Quehl qualified in 4th position after a hard 2011 season plagued with injury and recovery. On race day he ended up 9th with a 2:20.6 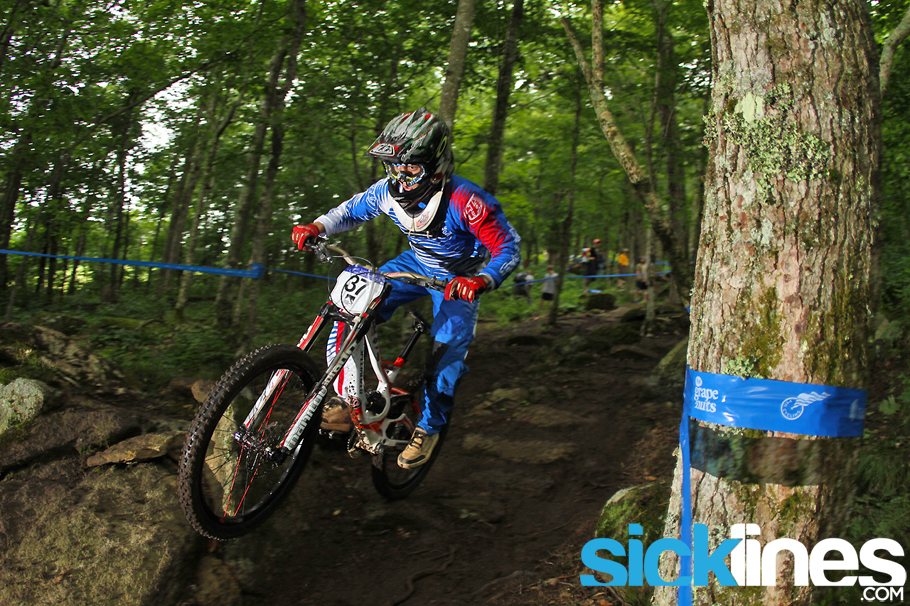 Ethan Quehl - Southern Pro racer is getting back up to speed

Cole focusing hard on his line

Yeti’s Eliot Jackson was able to get a podium spot in third place with a 2:16.8

Neko Mulally in the eyes of the UCI was the 2011 USA Cycling National Champion as he had the fastest run of the day. He was forced to race in the JrX category by USA Cycling in 2011 even though he had a Pro License. This caused some confusion earlier in the year but going forward this shouldn’t be an issue. His race run was a 2:13.2 this year and put in him second behind team mate Aaron Gwin. 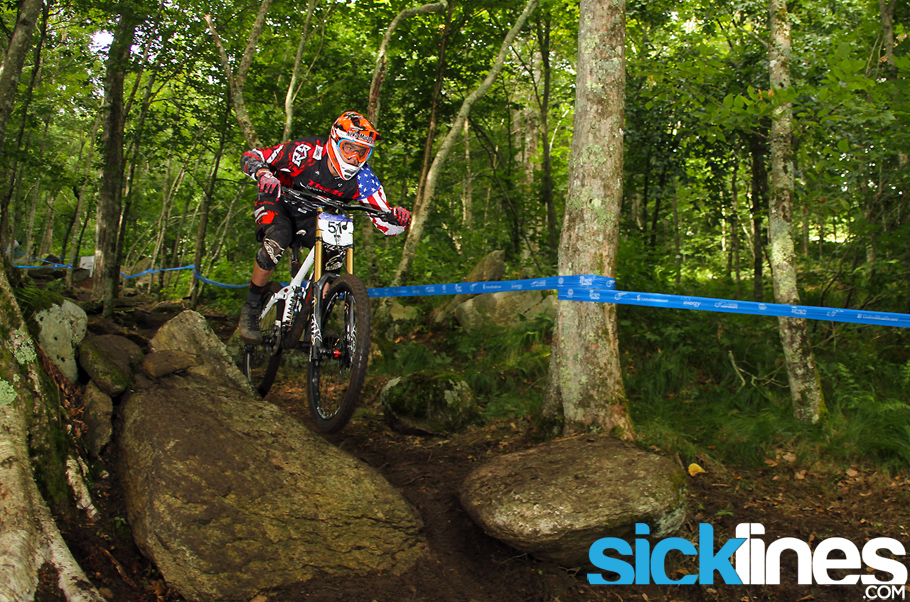 Duncan Riffle, DIRT Norco rider, struggled to put a good run together and would end up in 12th place at the end of the day. 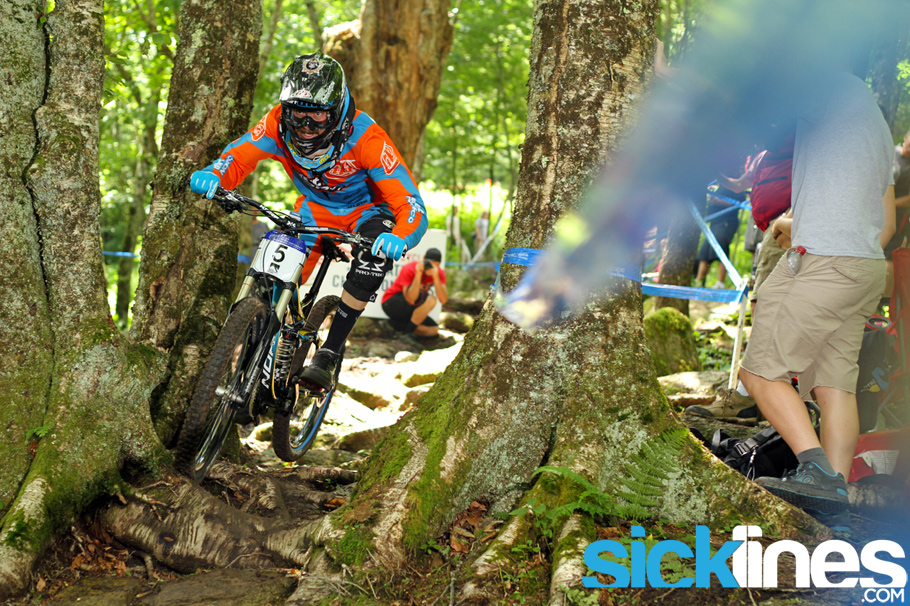 Aaron Gwin has been on a storm. He crashed last year in the rock garden, dashing his chance of victory. This year however he was able to win both seeding and the final with a 2:10.0. 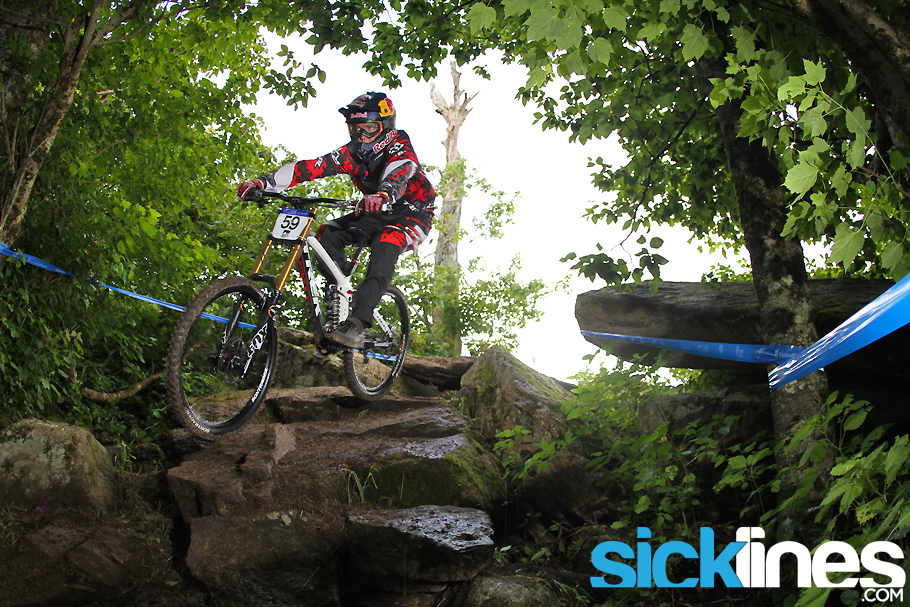 With Jill Kintner at home mending her broken arm, the Pro Women battled on hard for the downhill title.

Jacqueline Harmony proved that she was the woman to beat in qualifying and continued her winning ways into the finals as well with a 2:36.6. Melissa Buhl put on a good fight as well but couldn’t touch Harmony’s time. Jamie Rees would round out the top 3 for the Pro Women in downhill. 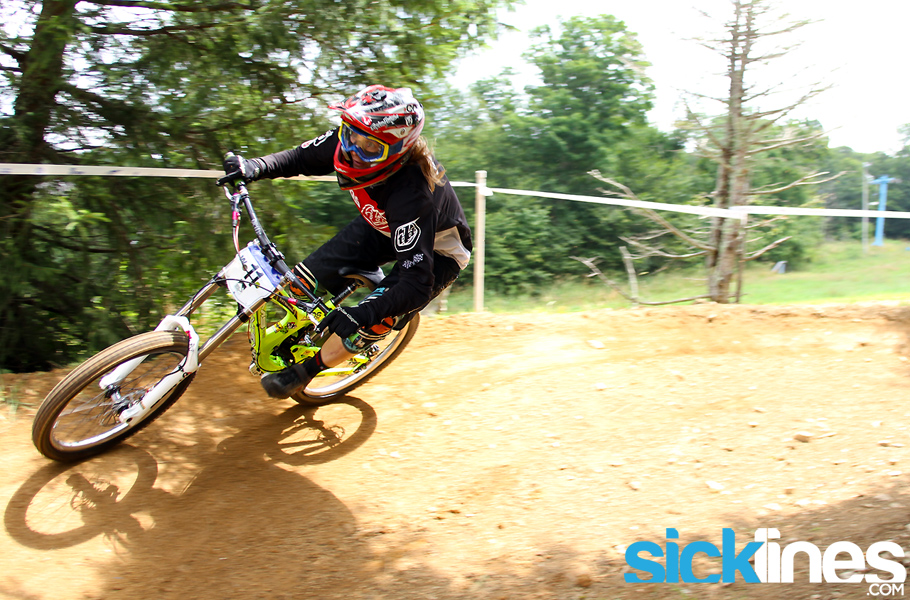 See more pictures in the gallery