Andrew Neethling is looking to do well again this week

With the track still wet many riders were crashing throughout the day as things started to dry up. The course claimed a few riders and by qualifying day a few of the protected riders decided not to risk qualifying including Greg Minnaar, Danny Hart, and Sam Hill.

By the conclusion of qualifying Steve Smith found himself in the top spot. This put Steve Smith 3 points ahead of Gee Atherton leading into the Sunday finals.

Mick slots in and qualifies 2nd

Mick Hannah has found some new motivation since Worlds. He’s been on a tear these past two world cups and seeded well here again in 2nd place. During Hafjell, he struggled a little bit in the finals and couldn’t repeat his great qualifying run. Hopefully he’s able to keep it upright and on the track for the finals.

Gee Atherton has his work cut out for him in the finals. Steve Smith has the momentum and is looking great on course. Gee knows how to win and it will be an exciting race with Smith coming down last on Sunday.

Jill Kintner gets along well with Leogang and posted the third fastest qualifying time for the pro women. Rachel Atherton is poised to win this race and the World Cup overall. Rachel qualified first place in the Pro Women’s field.

Wyn Masters has shown he has what it takes to run with the big boys. 18th place in qualifying for the Bulls rider. Check out more on his bike here.

Trek World Racing’s Neko Mulally has been on a roll lately as well as his team mate George Brannigan. They’ve been running the Bontrager G5 tire with great success.

Loic Bruni has really stepped his game up. When you consider this is his first year in elite, watch out! Loic and teammate Sam Blenkinsop were running the 27.5″ wheeled bike again this week. It seems that they’ve got a good setup as they placed 4th and 5th respectively in qualifying.

Bernard onboard his prototype 27.5 Pivot

Continuing on with the 27.5″ theme, Bernard Kerr was riding a prototype downhill Pivot bike as well with the big wheels. Brendan Fairclough (Scott) also rocked a 27.5″ wheeled Gambler.

Scott riders using the 27.5in wheel

Mick slots in and qualifies 2nd 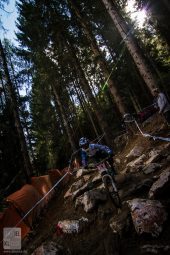 Bernard onboard his prototype 27.5 Pivot