Steve Smith has followed up his qualifying run with a storming run to take the victory at Leogang and the men’s overall title. Emmeline Ragot took the win for the women over Rachel Atherton but Rachel still retains the overall victory this world cup season.

Loic Bruni (2nd) and teammate Sam Blenkinsop (7th) also performed well in the finals onboard their 27.5″ wheels to say the least.

The Lapierre bikes are a little bit smaller than some DH bikes so i’m sure some of the additional wheelbase they got has been a good thing for their riders on 27.5″ wheels.

Some of the fans expressed their concerns over big wheels with some signage. Funny thing is that no one was on a 29er that we’re aware of!

Patrick Thome drops in to the final section of Leogang.

The rock garden proved challenging for some riders. While it didn’t make or break the race it was key to maintain momentum through it.

Richie Rude Jr qualified in 20th place. He’s still a Junior and would’ve smashed that field if he wasn’t in the Elite category. It will be interesting to see how the Junior riders transition into Elite in the future without having the experience against the Elite riders.

On the positive side of things, the Junior category allows the Juniors to get more time to learn and compete at a high level without the stress of qualifying in the Elite field. Noel Niederberger grits it out and took the win today for the Junior men. Loris Vergier took the win and the overall with his efforts this season.

With the conclusion of the World Cup season Smith takes the overall with Gee in second, Minnaar in third, Loic in fourth, and Blenkinsop in 5th. Many riders were unable to compete these last rounds and caused quite a stir in the overall points but that’s racing!

Smith had a goal of being top 5 at the end of this year’s overall rankings. With his performance he’s exceeded those goals quite a bit and has taken the Pro Men’s overall. He’s the first Canadian to win the overall World Cup title. Bring on the 2014 season!

Gabe Fox talks about Stevie’s choice of bikes as he was seen riding his 27.5″ wheeled Worlds bike as well as his 26″ Wilson in the video below.

Be sure to watch the videos including the live replay to see even more content. 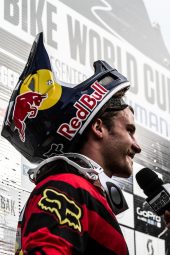