The 2013 Eastern States Cup stop #1 has concluded at Mountain Creek. Riders enjoyed the course and the festival atmosphere of the Mountain Creek Spring Classic. 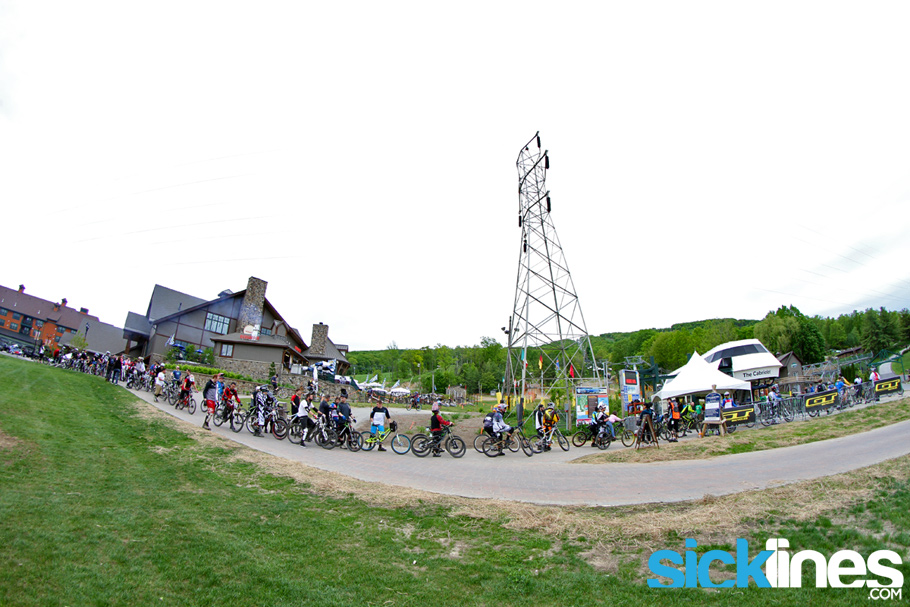 The lift line stretched far on Saturday. It went fast thanks to the speedy lift.

Trek World Racing was the big team here and it’s great to see them supporting the Pro GRT series by sending their main riders as well as KHS Bicycles. 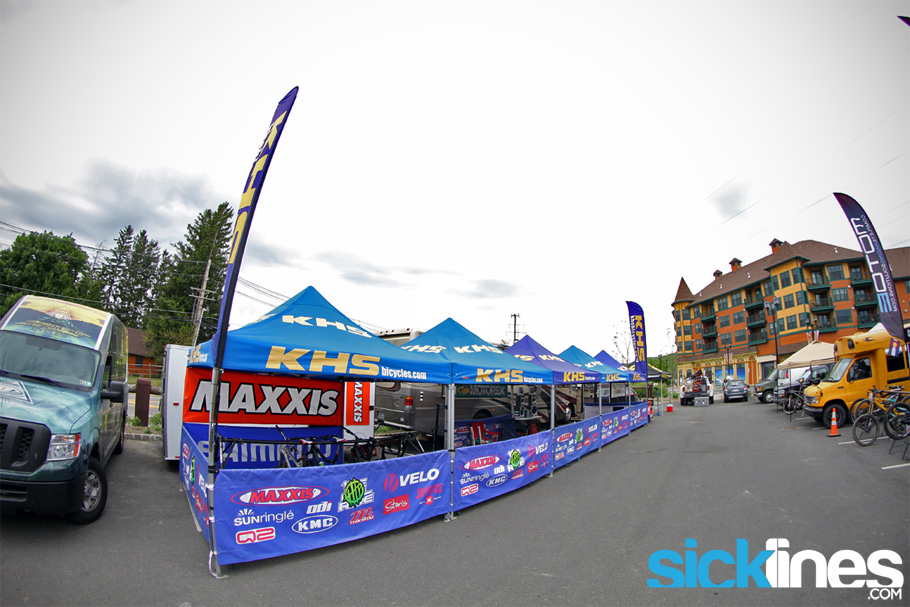 The pits were bustling with activity throughout the weekend. Teams set up on Thursday/Friday and it was a relatively quiet day for most riders.

POC helps support the ESC in a big way and they setup alongside the Intense tent as well. 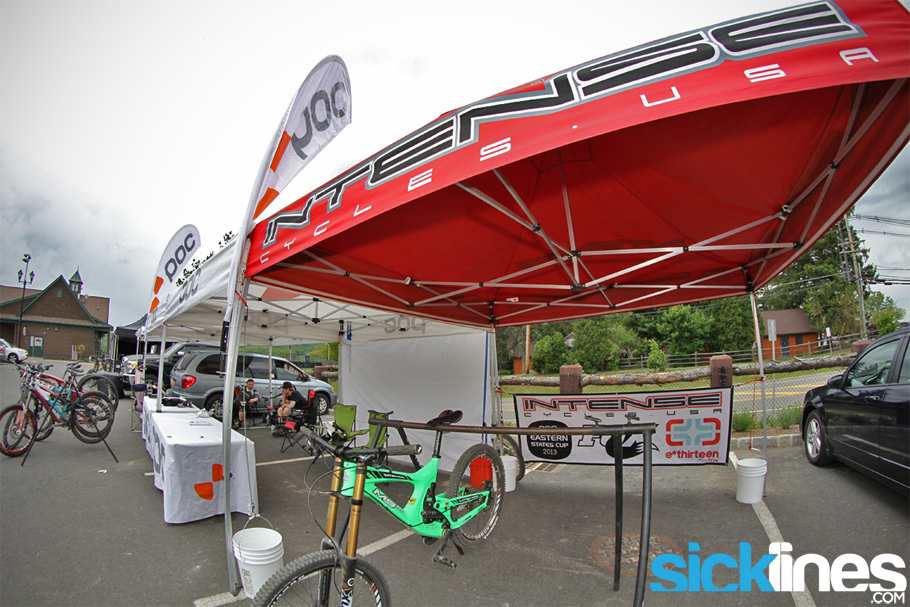 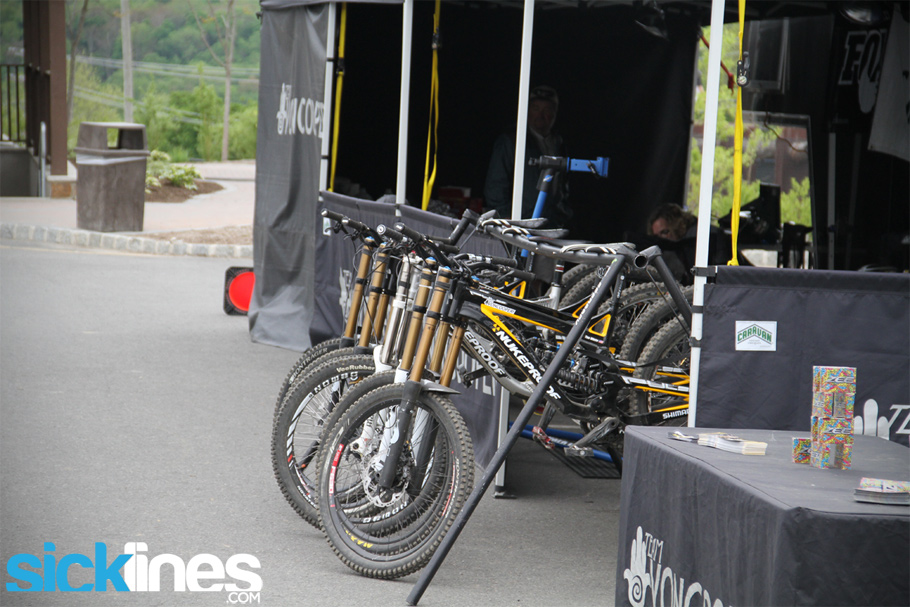 Voncooper set up all their Nukeproof bikes 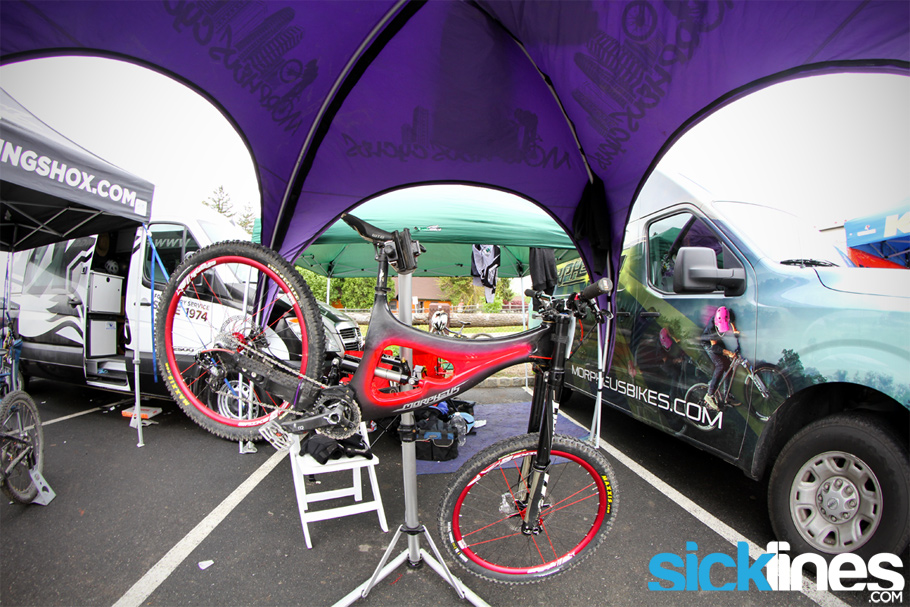 FOX had a pit space setup to help support and service any forks or shocks that racers had. 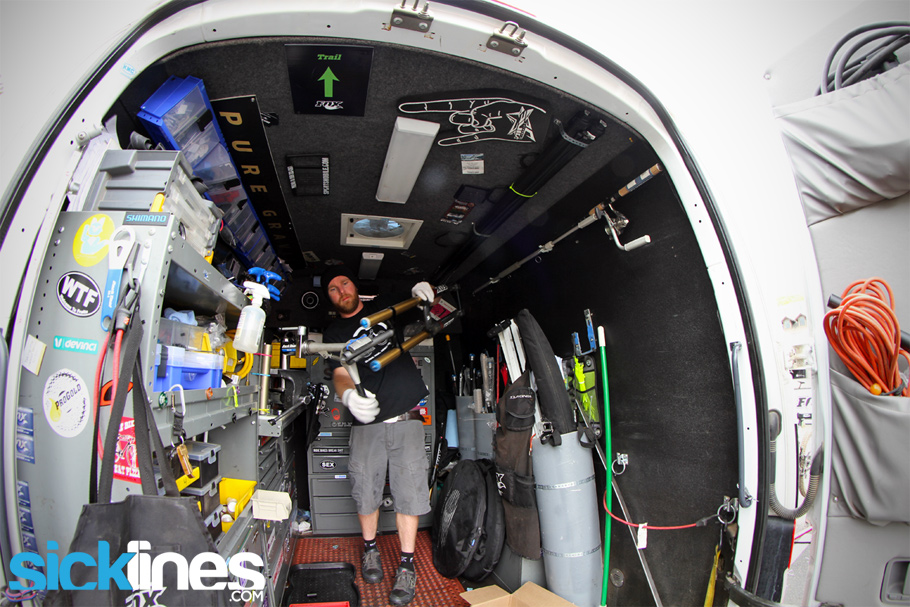 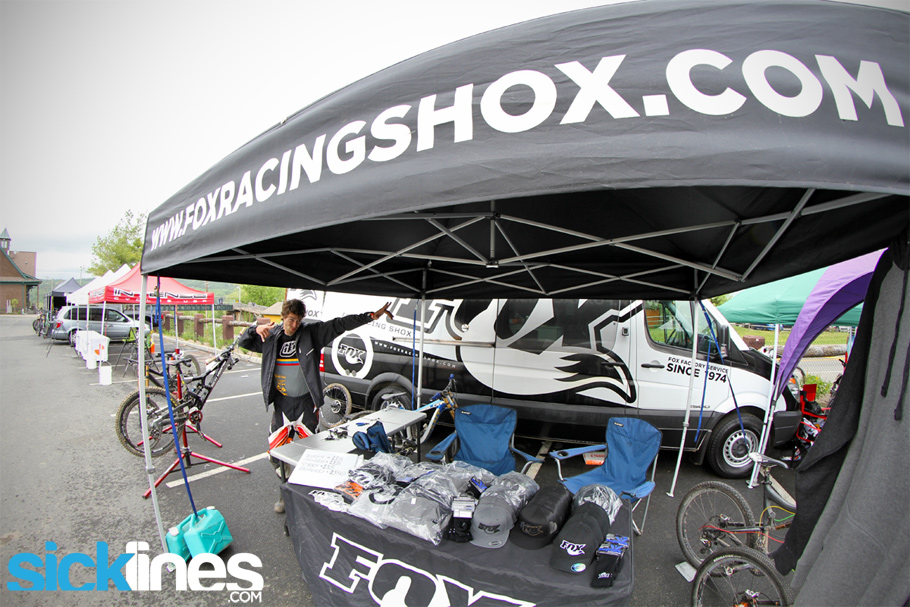 This year a Super D ESC race was added and many riders brought multiple bikes to participate in the fun course that Jeff Lenosky helped put together. The Super D race began with a mass start by the respective groups.

The course chosen for the downhill this year followed last years’ course pretty closely but with a few tweaks. 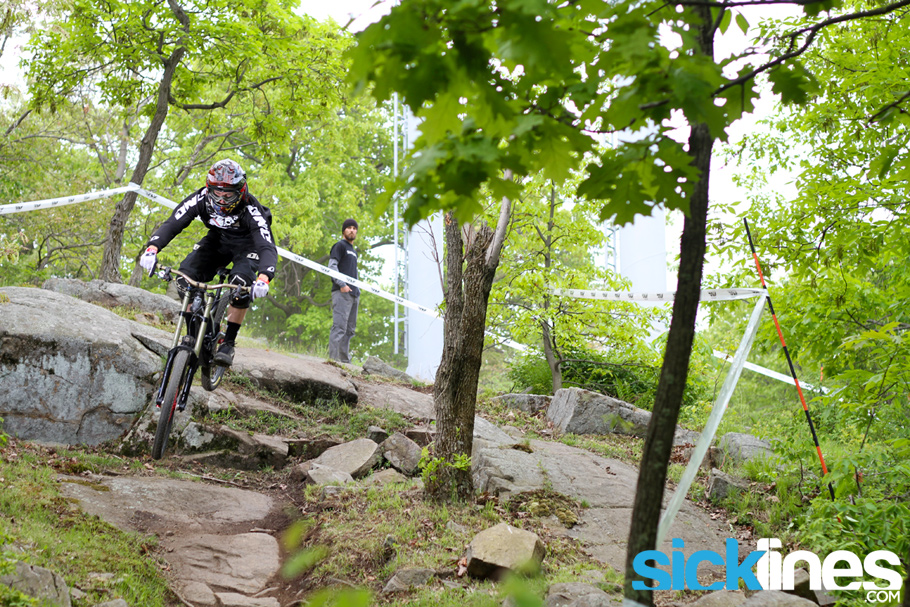 The upper section of the course remained very similar to last year and that’s a good thing given how fun it is. 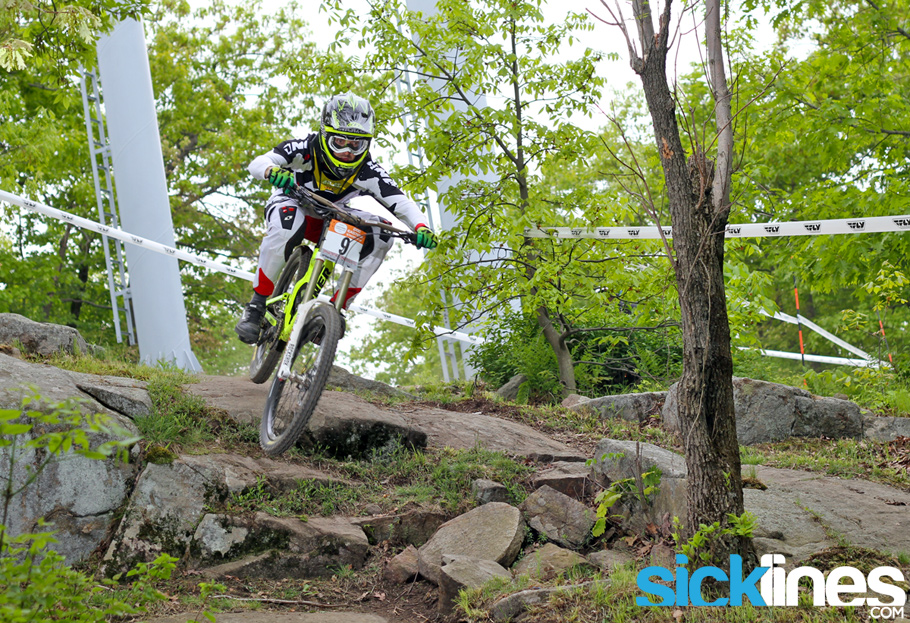 The main 661 rock garden got some re-work done to it. This section had lots of people during the race and is certainly one of the favorites to spectate from. 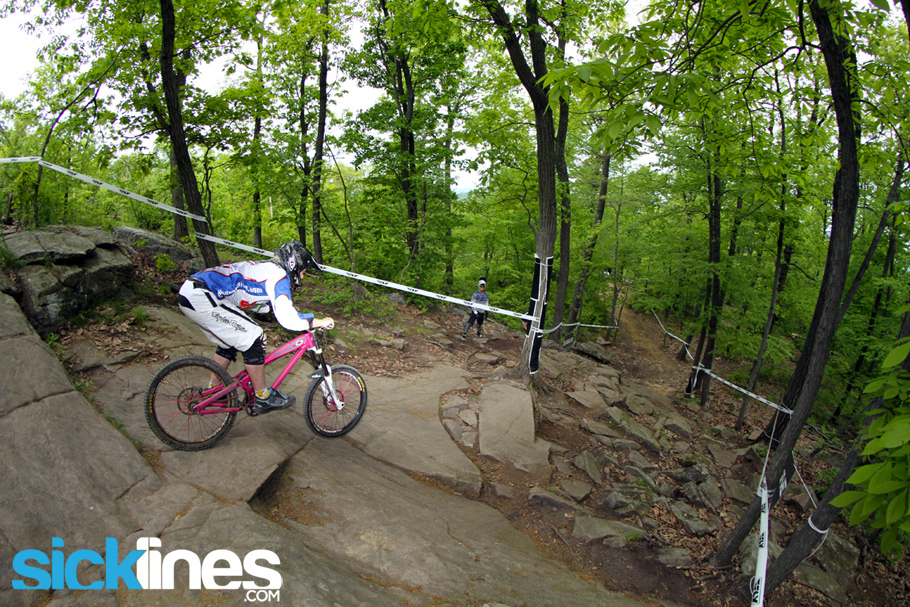 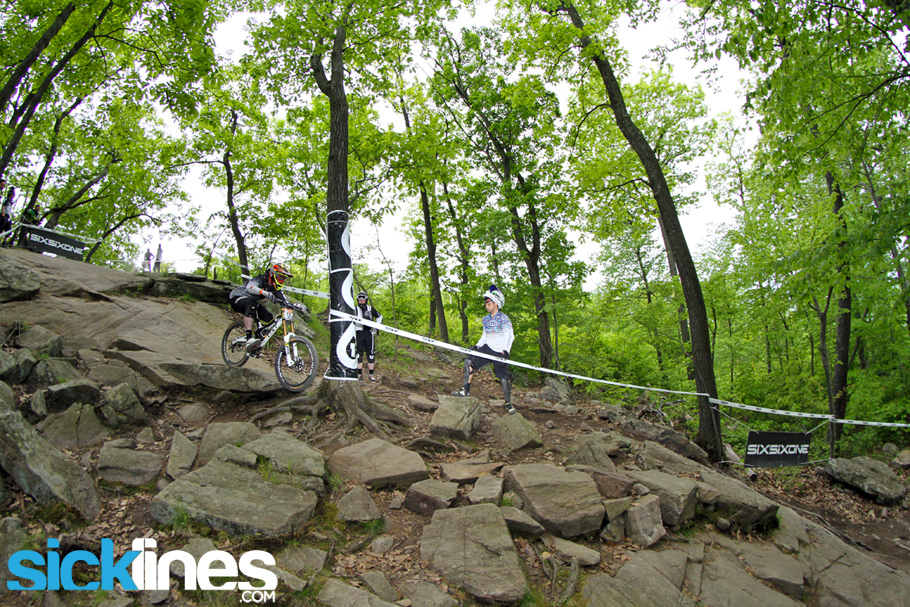 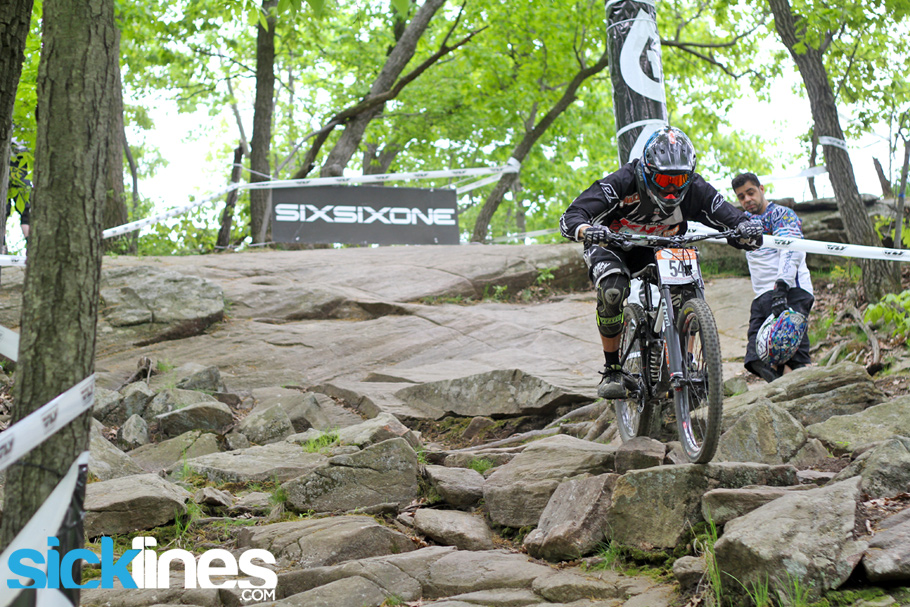 Winding its way down the mountain riders were met with a variety of berms, roots, bridges, and more. 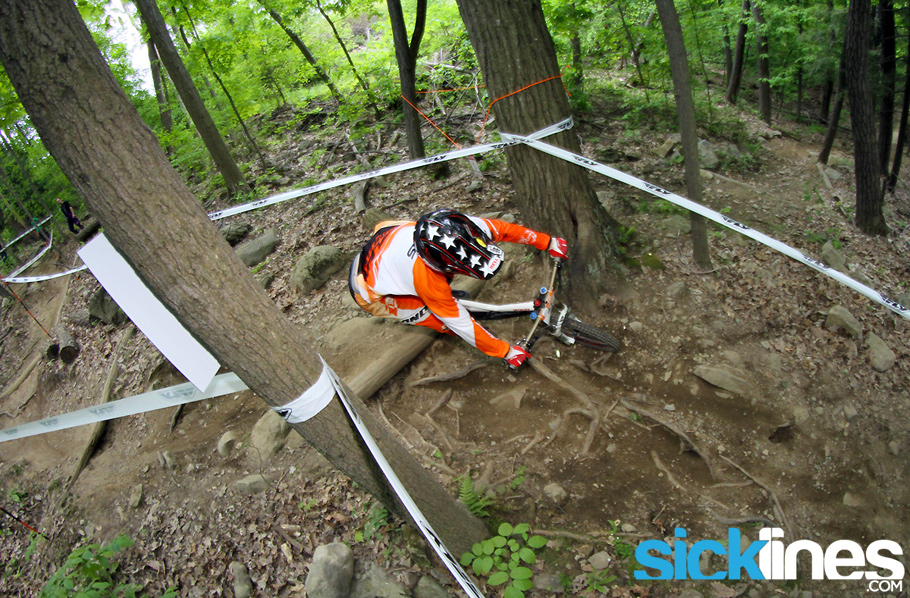 Winding down the mountain

In addition to the changes in the upper sections of the course, they also added a final jump dubbed the GT “Earn Your Wings” Roller/Step Down. It was a well built feature that allowed riders to hit the big jump safely. 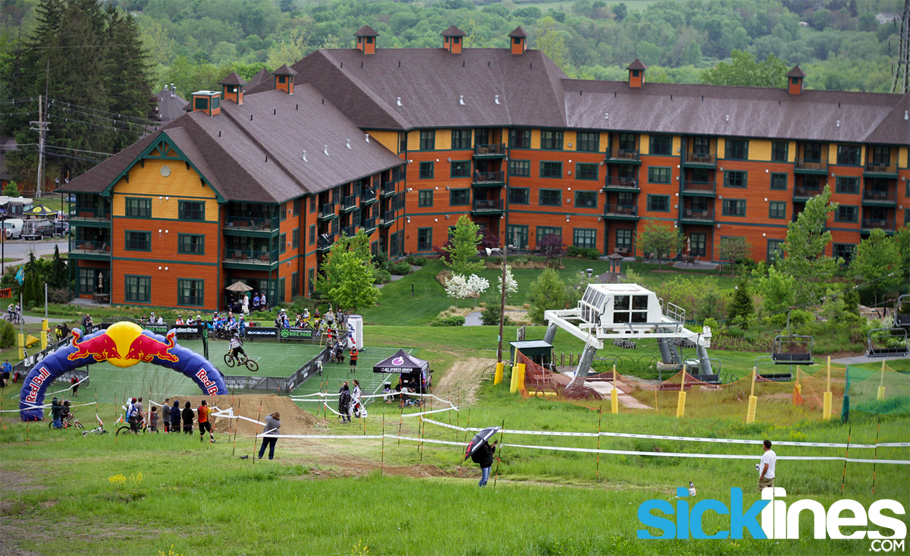 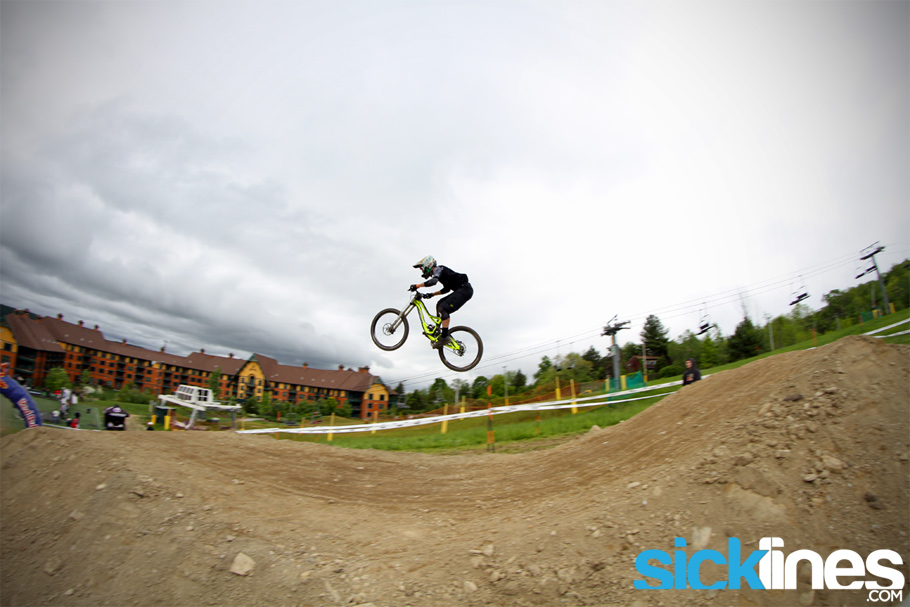 On race day, the rain from late Saturday and Sunday morning made things a little bit greasy in spots. 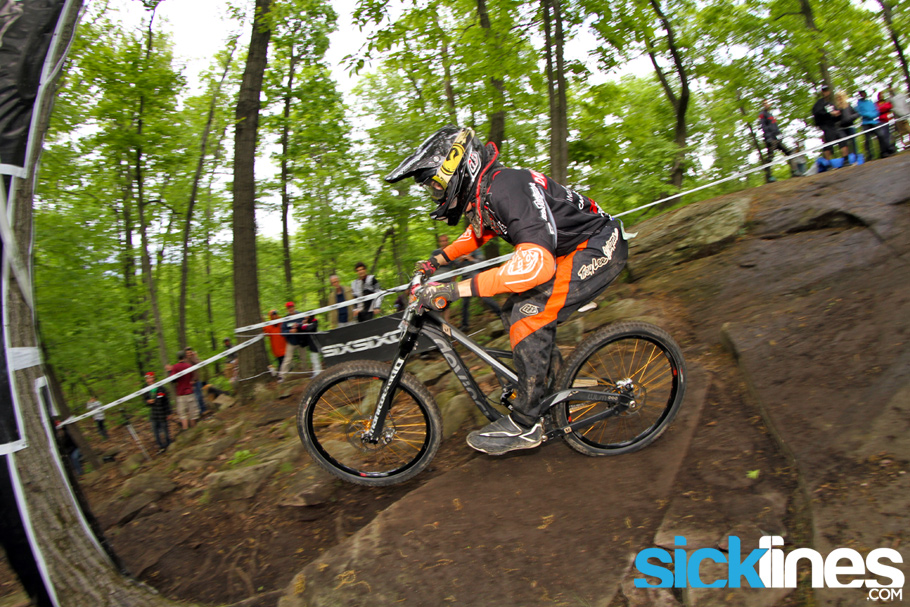 The Junior men category (Cat 1 <18) is one that is usually watched closely as this gives an indication of who to keep an eye for sponsors and potential future stars.

Charlie Harrison (ODI / Specialized JR Development Team) was able to take the seeding spot on Saturday for the Cat 1 (JrX / <18) and followed it up again on Sunday to take the win in the competitive category with a 2:18.96. His time would’ve placed him quite high in the Pro field. 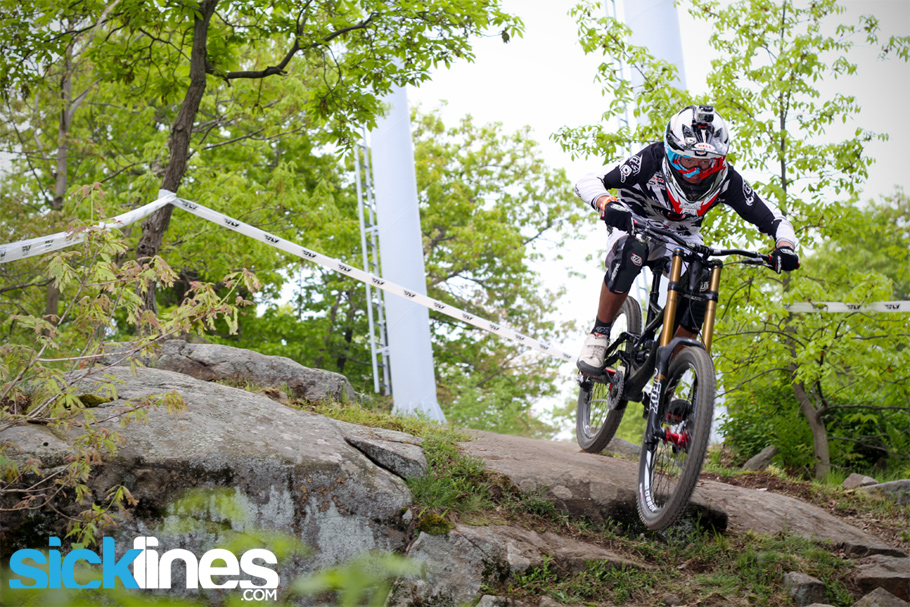 They added a gap jump in the middle of the lower section of the woods as well as rerouting a few areas in the Gingerbread woods. Junior Isaac Allaire hits the fast jump in the woods with style. 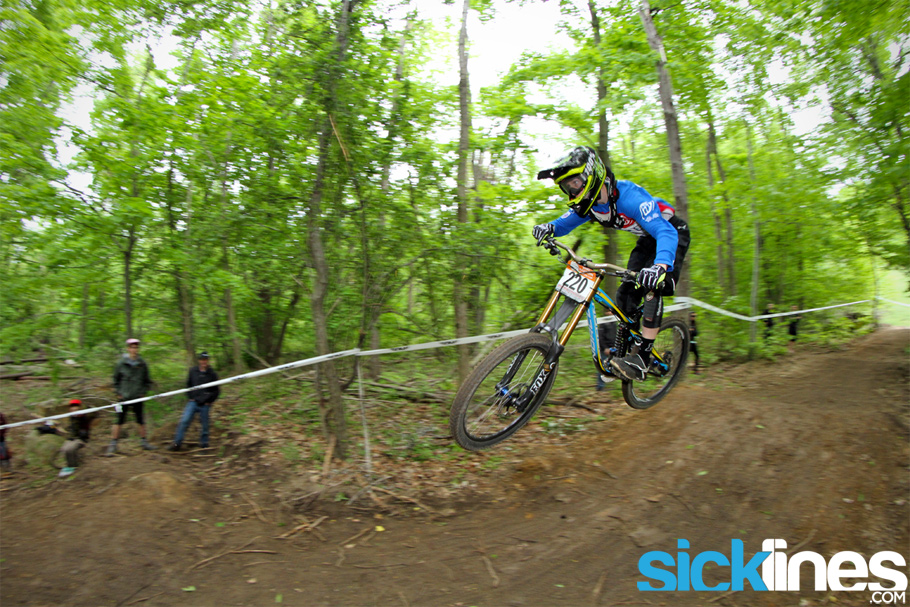 Luca Shaw and brother Walker Shaw also put up a good fight. Luca Shaw nearly ended his 2nd place race run by nosing into the gap in the woods and getting cross rutted upon landing. 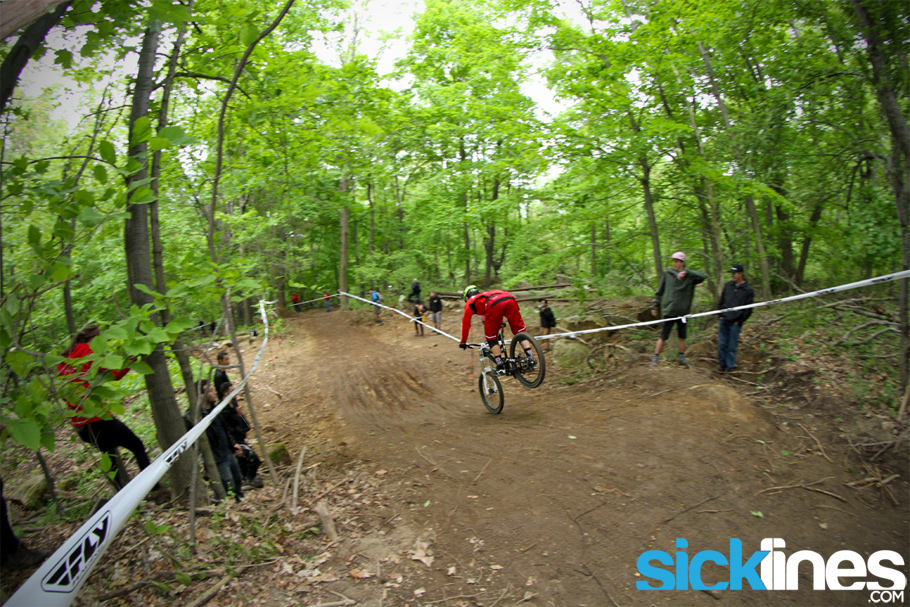 Luca Shaw nosing in to the ruts. 2nd Place JrX

He only lost by .58s to Charlie and this certainly didn’t help. Luca and brother Walker (4th) were crushing laps together all weekend onboard their Specialized Status’. 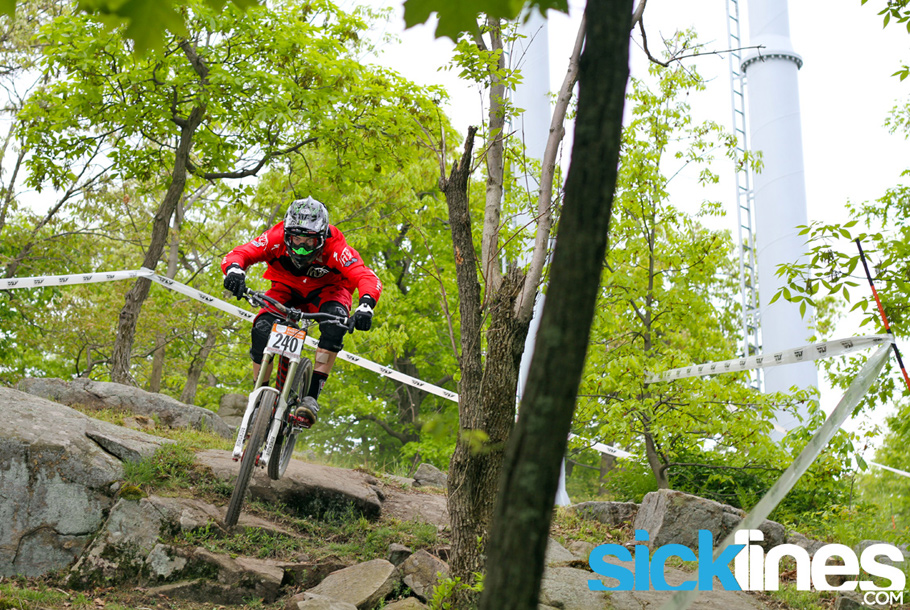 In the Pro Women’s field Anne Galyean was the woman to beat at this race. She was able to fend off new-comer Allison Zimmer in the finals by 8.87s.

Brook MacDonald and Neko Mulally battled it out for the top two spots this weekend. It was clear these two were gunning for the win from day 1 as they got up to speed quickly on the course. 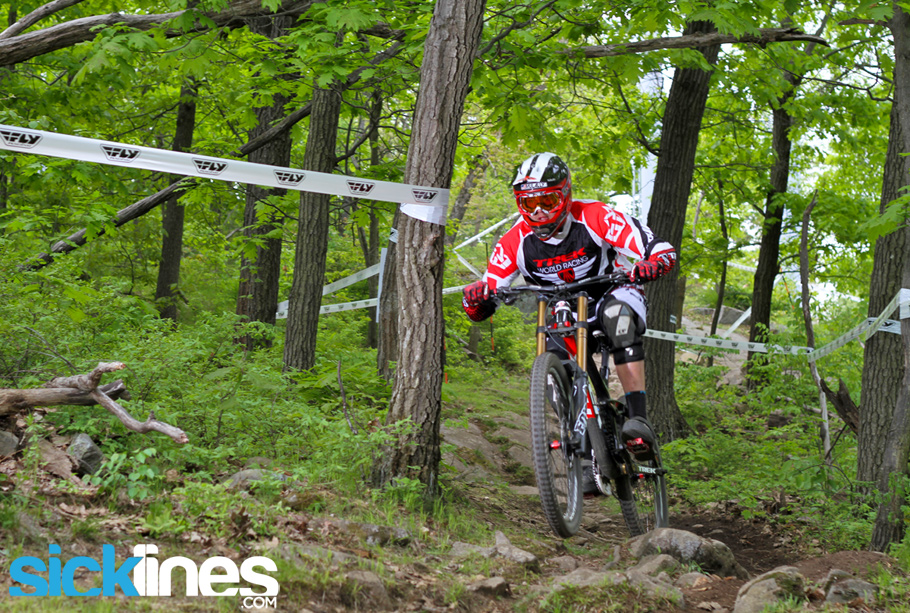 Neko took seeding on Saturday as Brook struggled in a section and lost a significant amount of time due to his tree mistake. On race day however, it was Brook MacDonald who took the top spot with a 2:12.98 over teammate Neko (.83s back).

Brook said: “I’m really stoked to take the win today here at Mountain Creek. The short track made for some really close racing. A big thanks to our mechanics and also Neko’s family for taking care of me over here on the East Coast!” 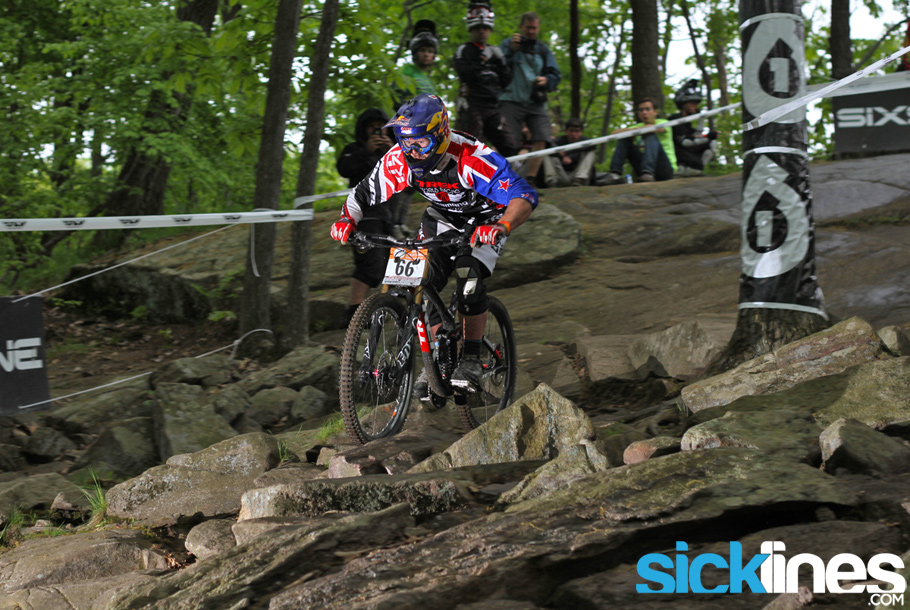 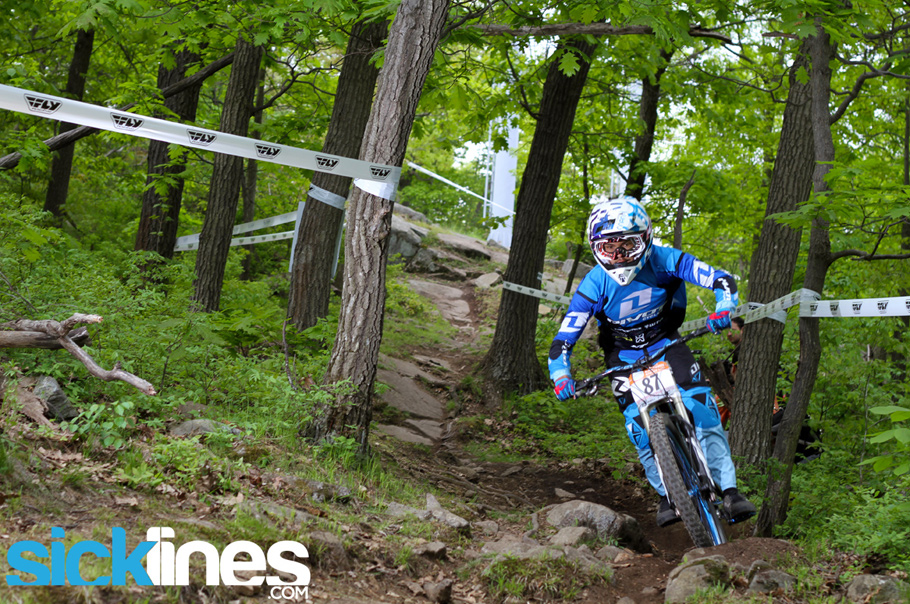 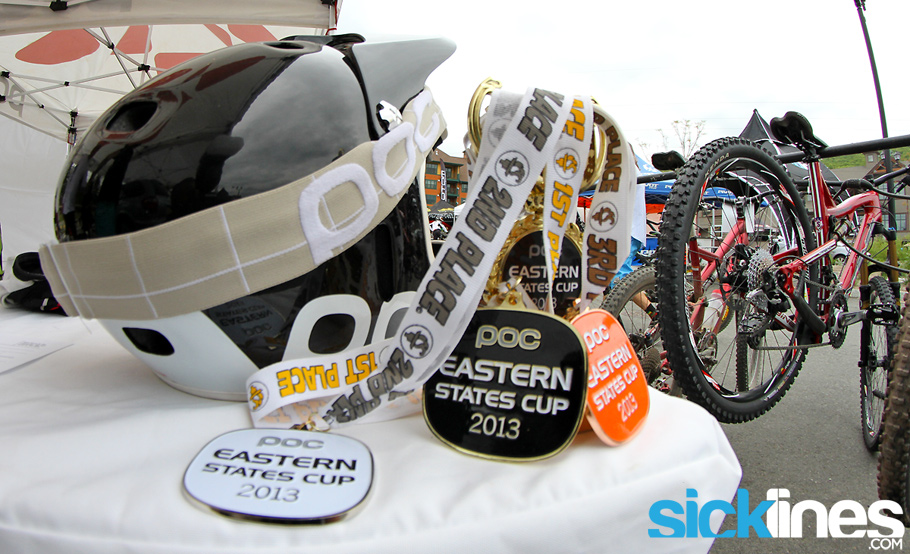 The Eastern States Cup moves on to round 2 that is another Pro GRT stop at Plattekill, NY on May 24th – 26th over the Memorial Day holiday.