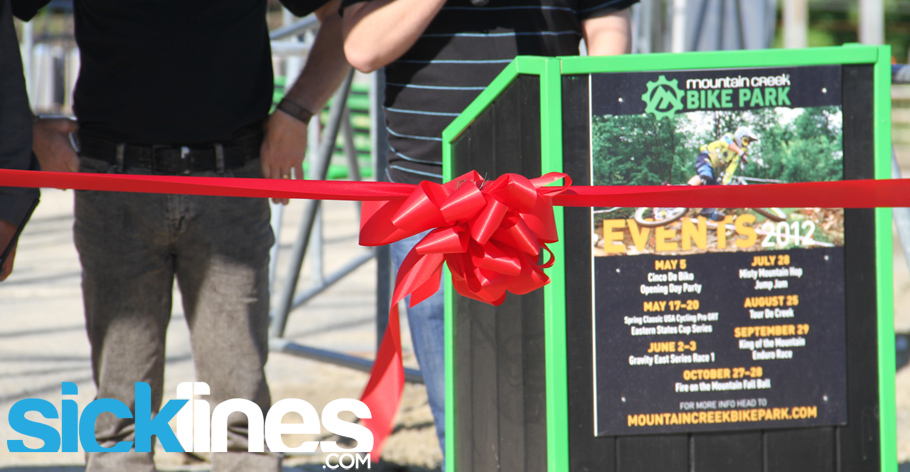 Mountain Creek Bike Park has been putting a lot of work in the off season into their Bike Park. They gave Aaron Gwin the opportunity to cut the tape on the bike park before the official Mountain Creek Spring Challenge began. Shortly after the ribbon cutting ceremony, the lifts began spinning riders to the top of the mountain for practice runs. 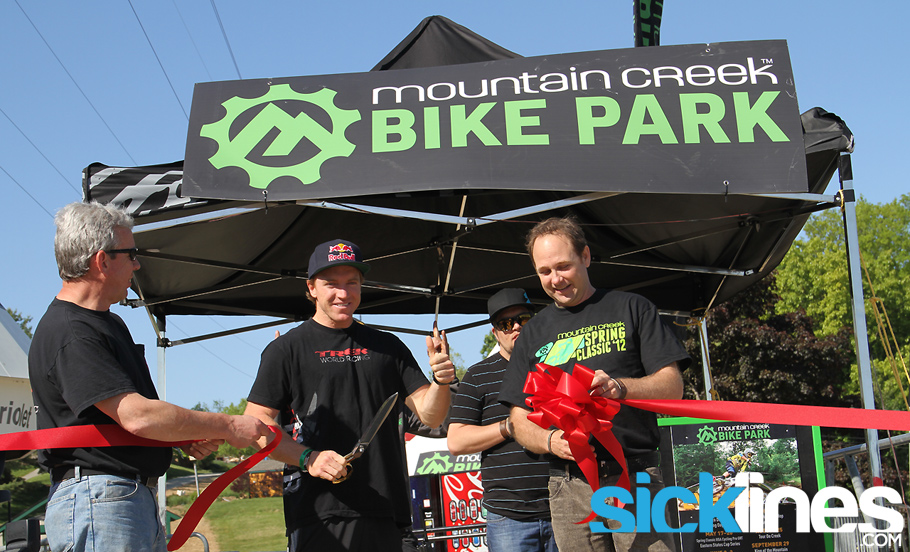 Aaron Gwin cuts the tape to open the park officially

This race is part of the 2012 Pro GRT series as well as the Eastern States Cup Series. Next weekend, Memorial Day Weekend, Plattekill hosts the next Pro GRT race where amateurs and professionals can again race against some of the best riders in the country including Aaron Gwin.

Over the past few years, the big race at Mountain Creek has been down one course. They decided to change things up this year and utilized parts of an older route that was once used for the US Open.

The course started out on the side of the lift and traversed underneath the lift to continue down the face of Great Northern which features some massive, fully exposed granite slabs.

Alex Couture traverses underneath the lift and sets up for a rock drop before the Great Northern section. 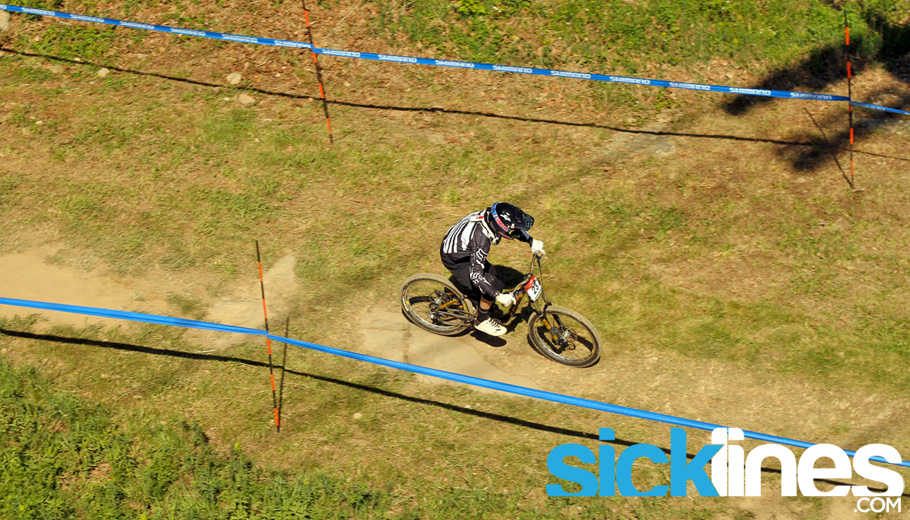 Alex traverses across the slope

Team KHS came out to race on the East Coast. KHS rider Quinton Spaulding (left) and ESC rider Geoff Ulmer (right) line up for the rock drop and prepares to carry speed near the top of the course. 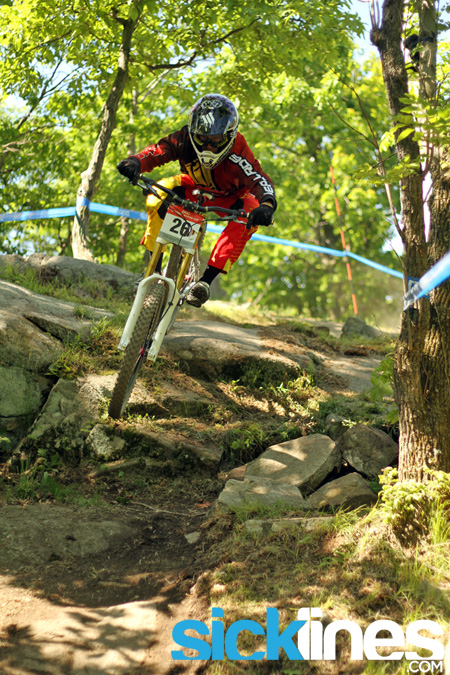 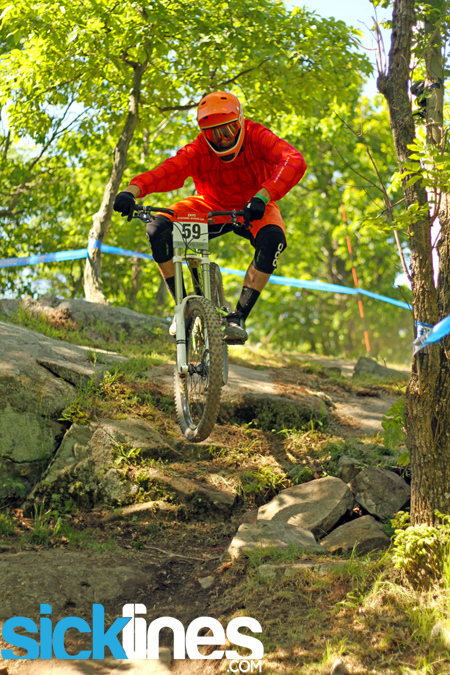 After the drop above is a fast section of woods that is key to maintaining good speed before entering the open slope. The entire Trek World Racing Team was in attendance including Aaron, Neko, and Leov. Justin Leov and Aaron Gwin know the line to take here. 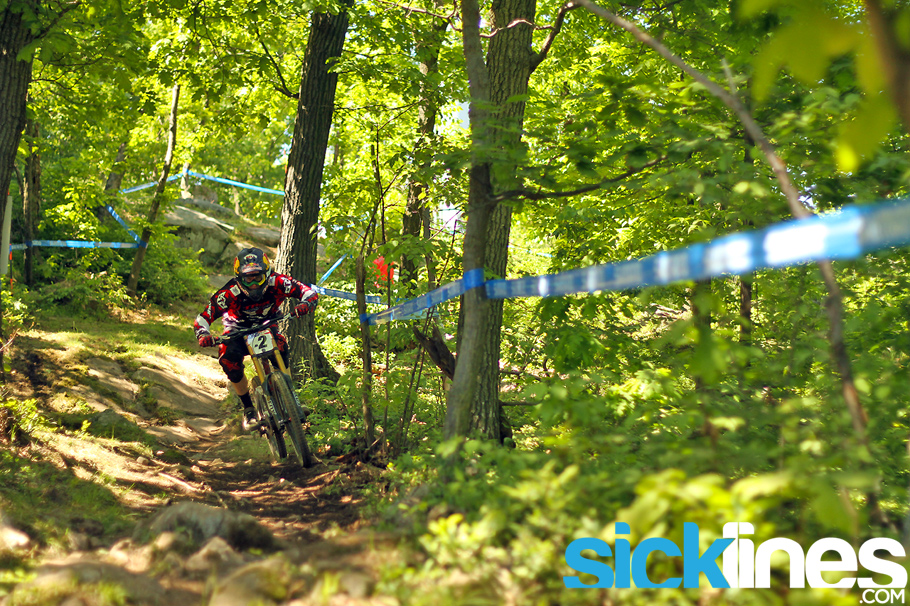 Leov would go on to take the #2 spot at the end of the day in Pro Men. 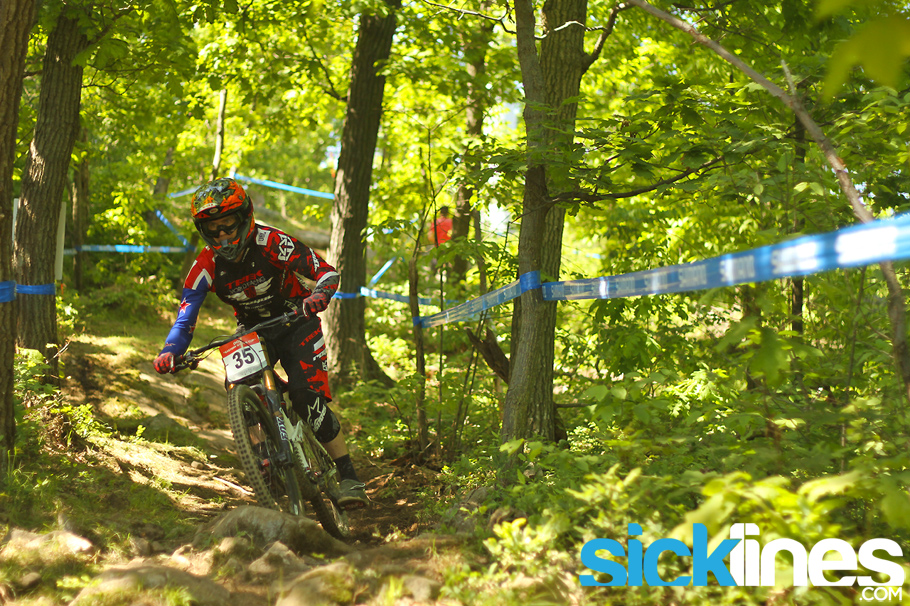 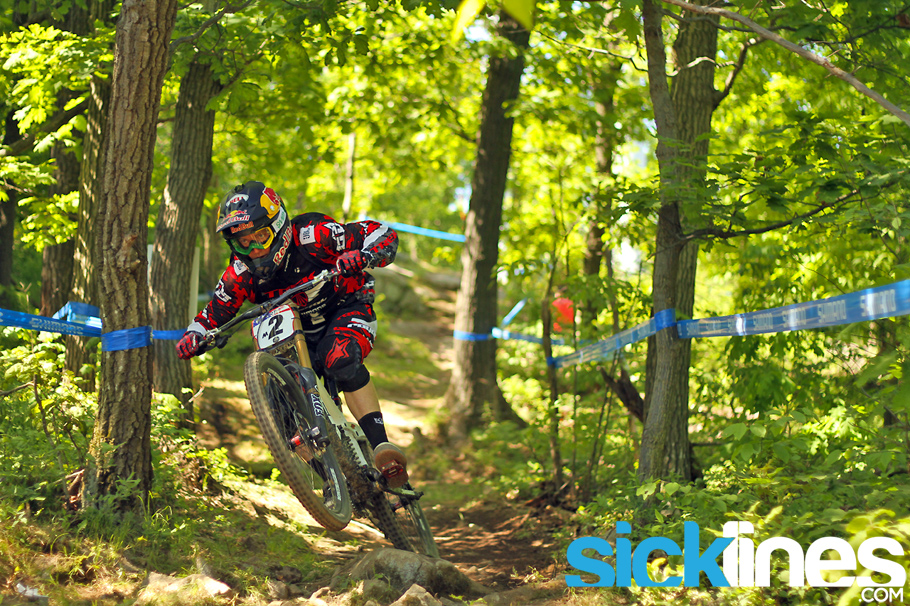 After the rock drop above and wooded section, the trail goes out into the Northern Ski Trail that has some big rocks and a high speed descent. Becky Gardner traverses her way across the top rock. 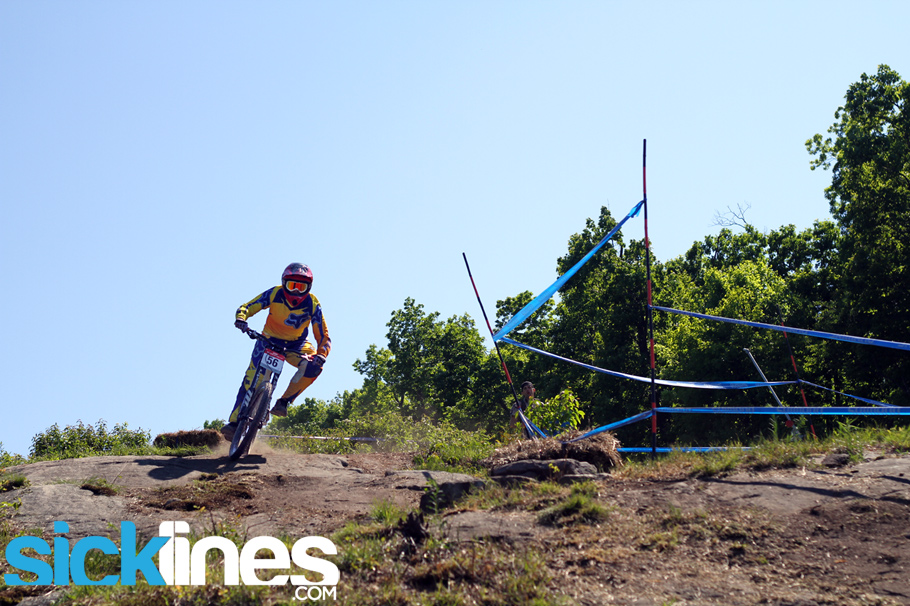 Racers carry a lot of speed down the Northern Ski trail and into the Asylum rock garden. Watch the video below to see how some racers fared in this rock garden.

After the rock garden is a jump and a sequence of berms that allow you to hold good speed through a technical section of trail. Noah Fairburn, Jr X rider for High Gear Racing soars off the jump just before the first berm after the rock garden.

Logan Binggeli, current USA National champion, can be seen wearing the stripes on his jersey proudly as he dips across a log into a tricky off camber rooty section of the course. 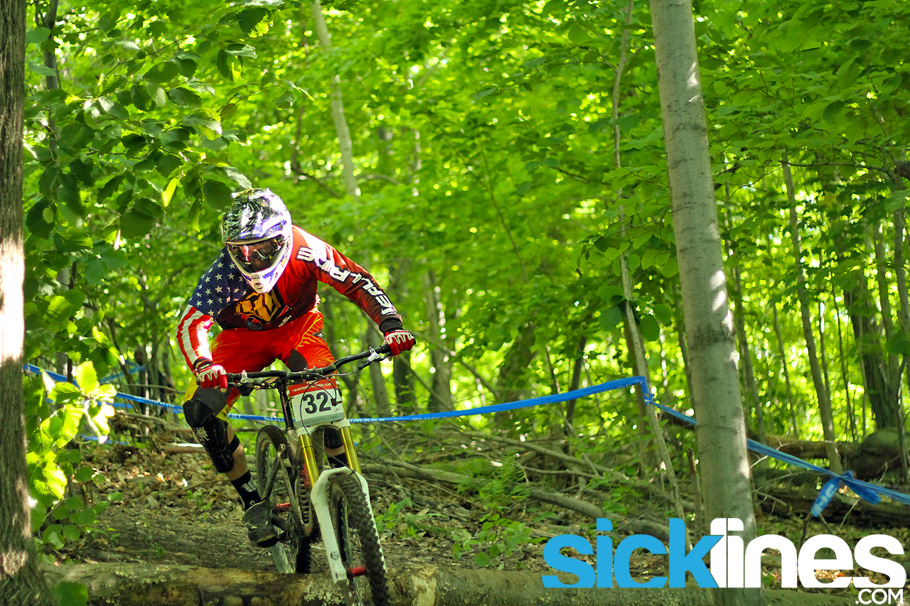 Logan tucks over a log before a sharp left corner 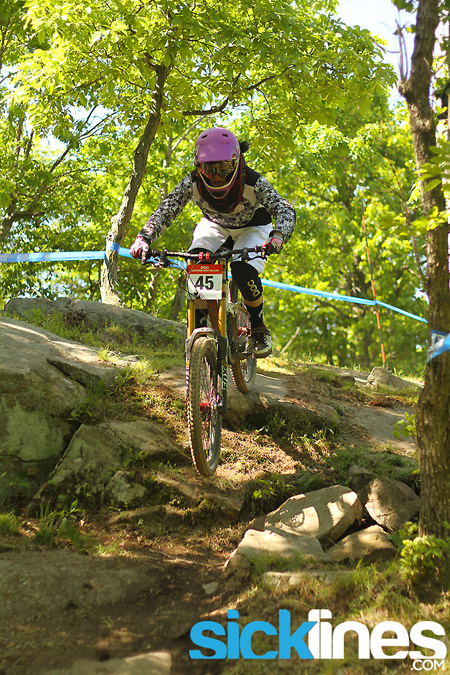 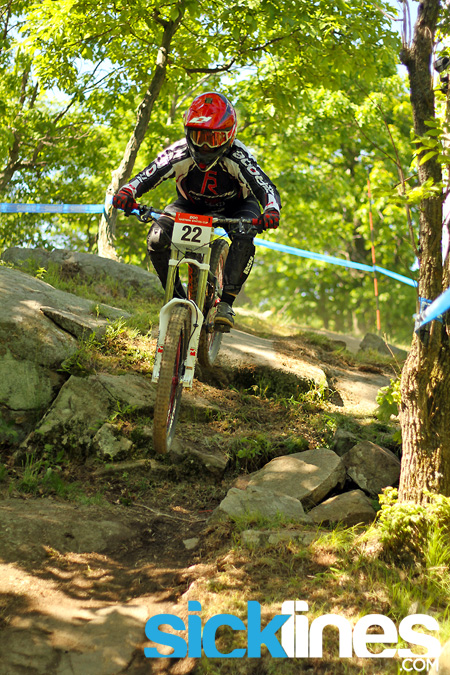 Lauren Daney went on to win the Pro Women Category after a pretty brutal crash in the rock garden the day before. 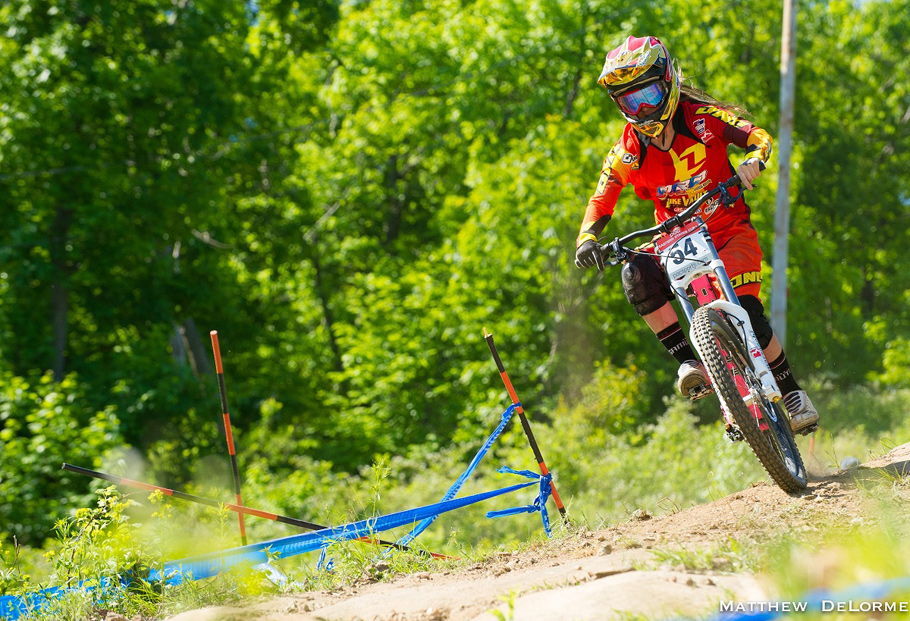 The course continues down Asylum which features a steep wooded area of the mountain with a handful of tacky berms. Sam Skidmore tackles a tricky wet section before the waterboy section. 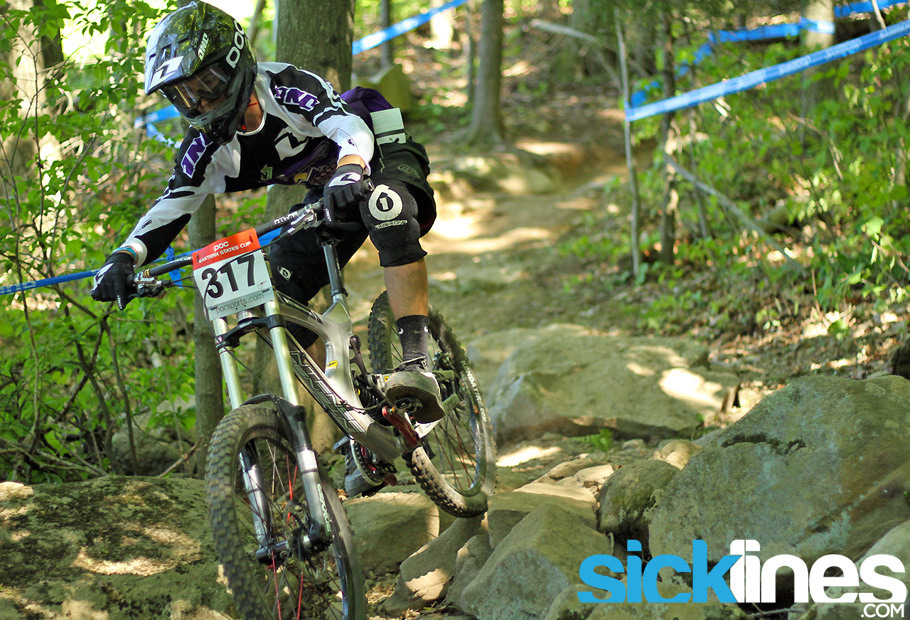 George Ryan (left) has been around Mountain Creek for a long time and he plays a big part at the mountain. 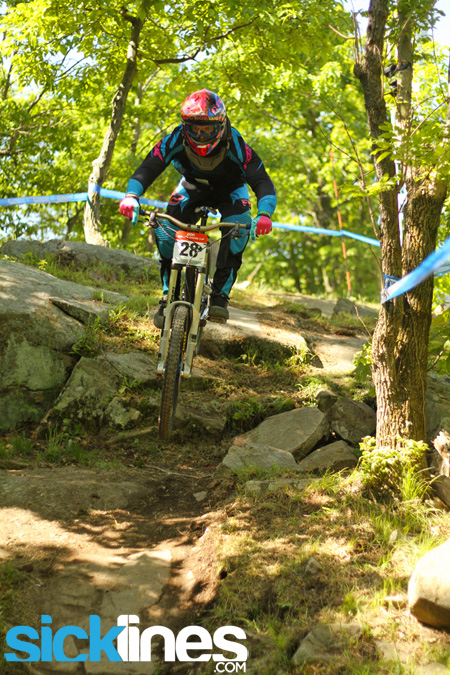 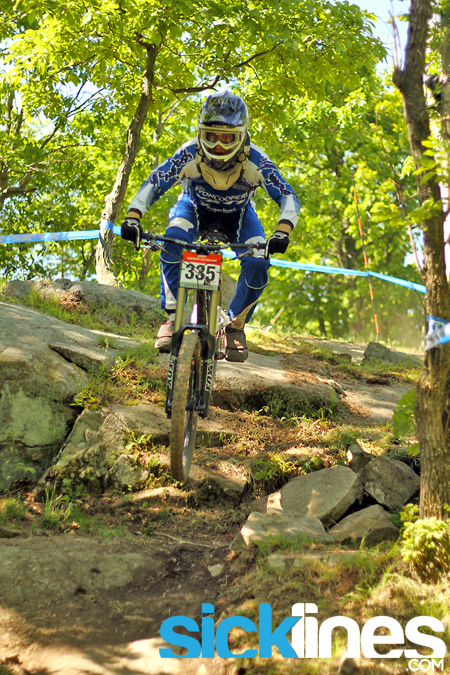 Pick your poison. Navigate the berms like Spenser to pump for speed or cut straight across like Leland O’ Connor. 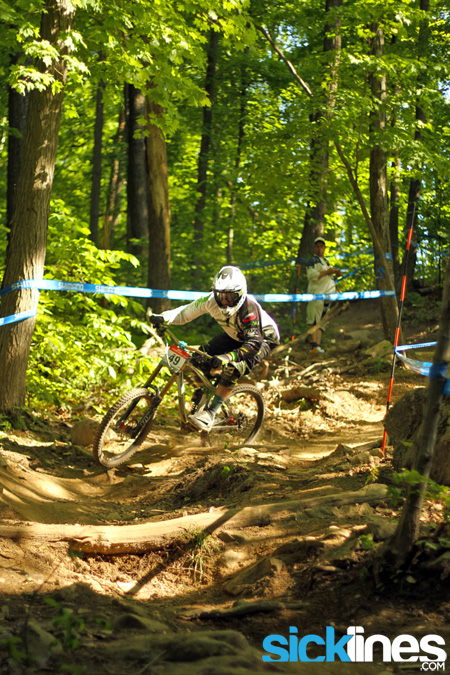 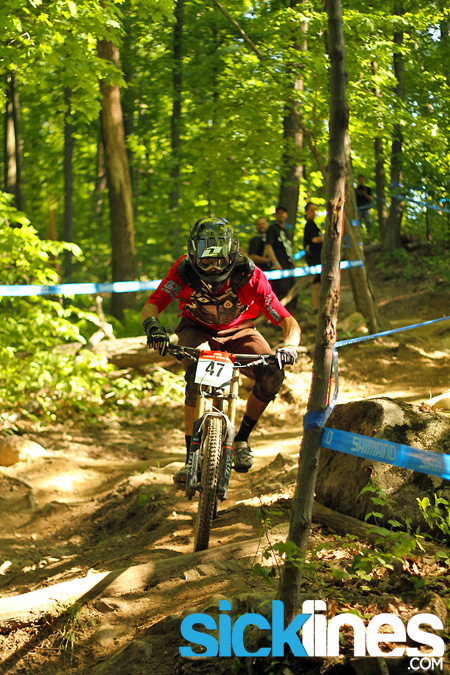 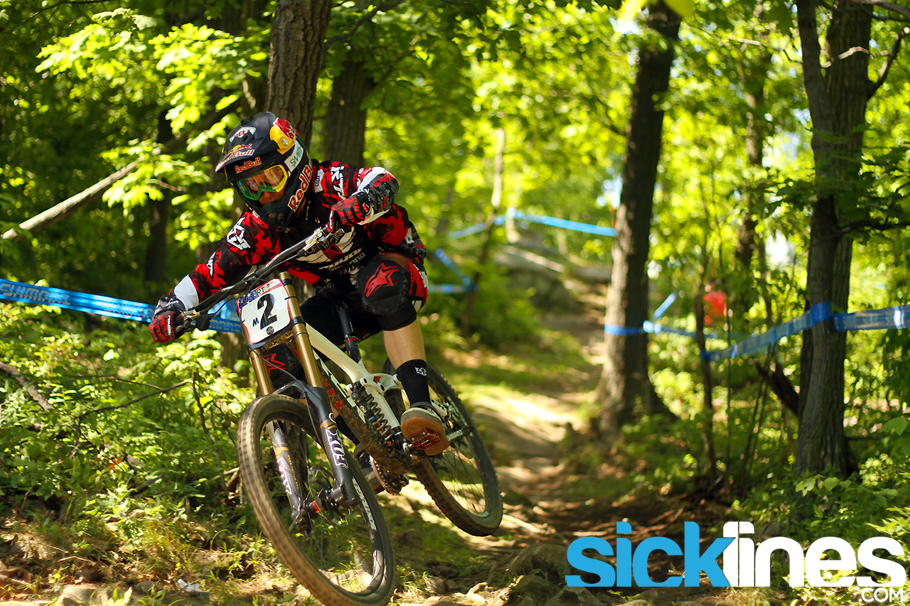 Aaron Gwin is ready for ESC #2 (Pro GRT) at Plattekill this Memorial Day Weekend, May 25-27th. Are you?
[Eastern States Cup Website]