Plattekill proved to be a formidable venue for racers again this weekend as many riders enjoyed the terrain and good weather that was on tap. Trek World Racing, KHS Bicycles, FOX Racing Shox, and many others set up their pits and settled in for the long holiday weekend. With the $5,000 prize purse, riders were hungry for results. 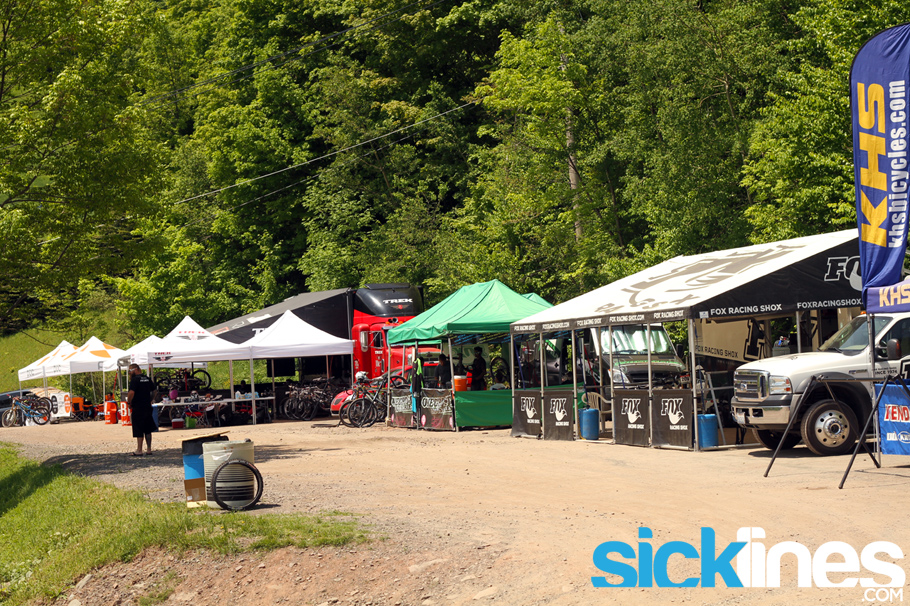 This was the second stop along the 2012 Eastern States Cup series. The first round at Mountain Creek saw Aaron Gwin and Lauren Daney take the win and this round would prove no different. 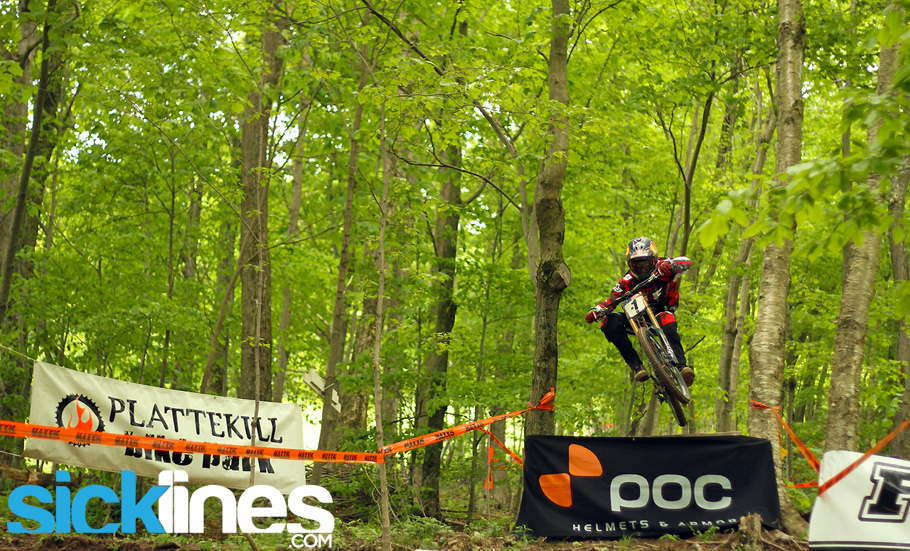 Aaron Gwin sends it off the POC road gap to victory

PJ (middle) and Lauren (right) were a little excited about the trails. They decided to squeeze in with this poor fellow on the left.

Plattekill chose to modify their Pro GRT trail this year and ran the race down the double side of the mountain and left the triple lift open for freeriding. The race trail started off down the Steve Porraro trail. The POC speed trap was in full effect this weekend giving pro riders a mission in the high speed course. Officer George Ulmer manned the radar and clocked riders thoughout the weekend but wasn’t telling the riders to slow down. POC gave helmets to the fastest amateur men and women at the speed trap. Be sure to pay attention to see where the speed trap will be next race! 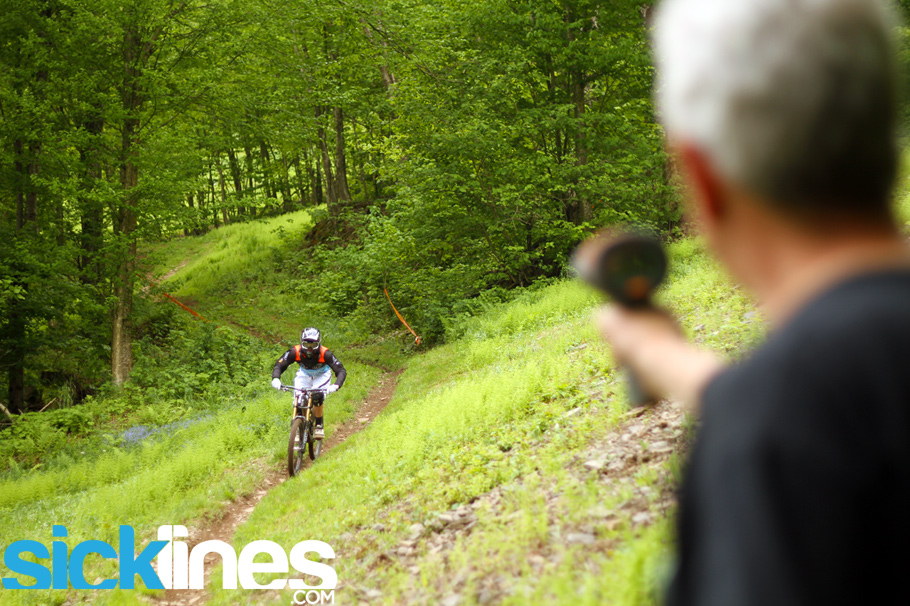 Officer Ulmer urges riders on in the speed trap zone. Slow down please.

After the speed trap is a berm that riders were barreling into given the speed they were carrying from the high speed section.

Trek World Racing’s Aaron Gwin took first place but his team mate Justin Leov (left) also put down a run that almost had him on the top spot in Pro Men. Luca Shaw (right) put down a blistering run to take the Jr X win. 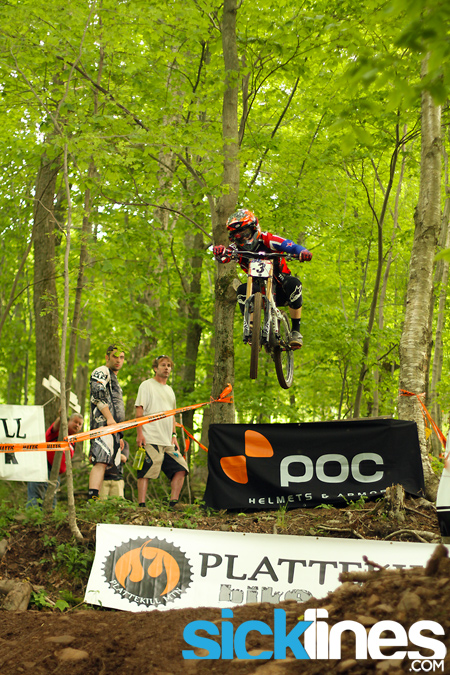 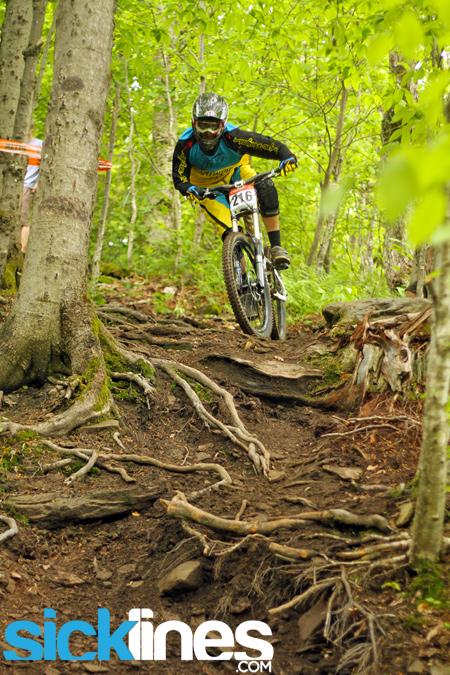 The top part of the course featured some steep chutes, roots, shale, and everything inbetween. Anne Galyean makes quick work of this section but injured her hand in the lower part of the track that prohibited her from racing in the finals. 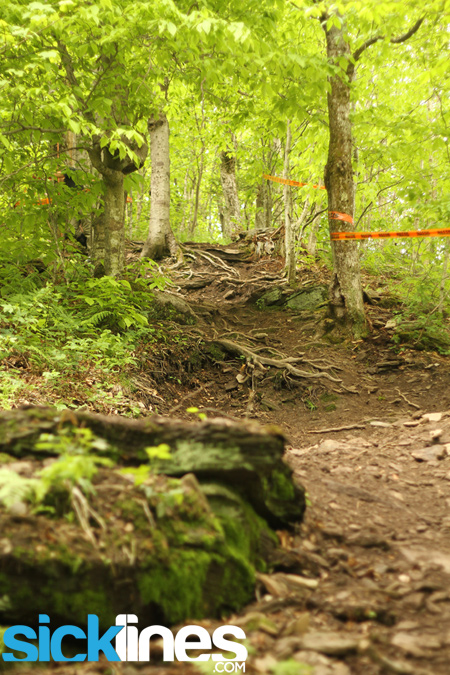 The Shaw brothers (Luke and Walker) were on form in the Junior Expert Men category. 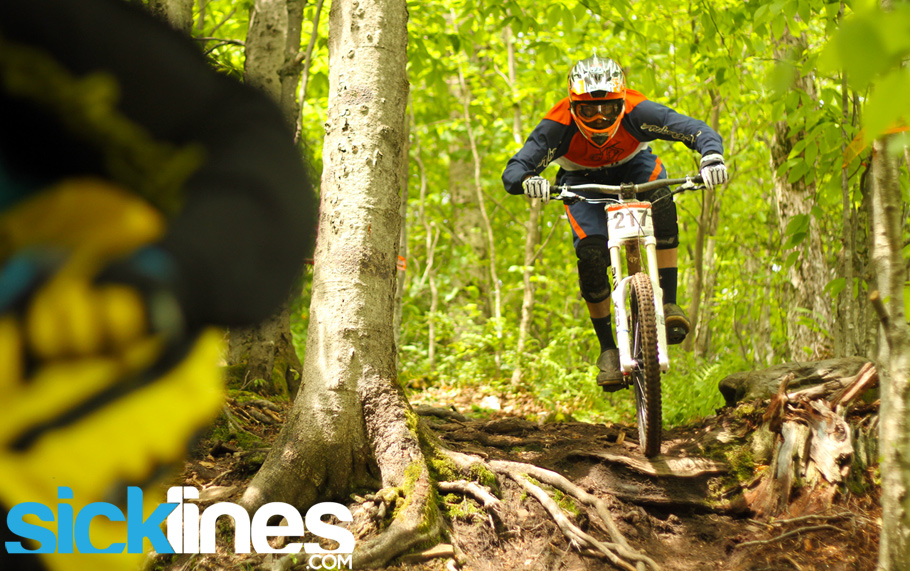 Lauren Daney (DRD Intense rider) leads the women category in the Eastern States Cup and the Pro GRT series. She took a win at Plattekill again this weekend and was the first woman to hit the POC drop pictured below and the finish line jumps.

Mathew Dodd (2:22.10) bar humped his way into America from Australia and down the Eastern States Cup course. His whips at the finish line were a crowd favorite. 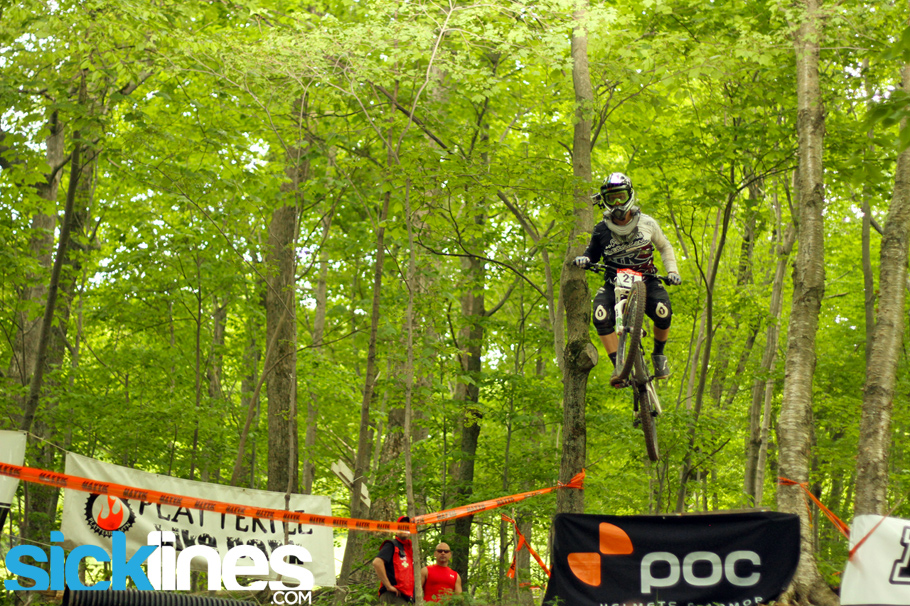 Mathew was having such a good time racing agaisnt the best at the Eastern States Cup that he recruied Jesse Beare from Austriala to join him on his journey in America. 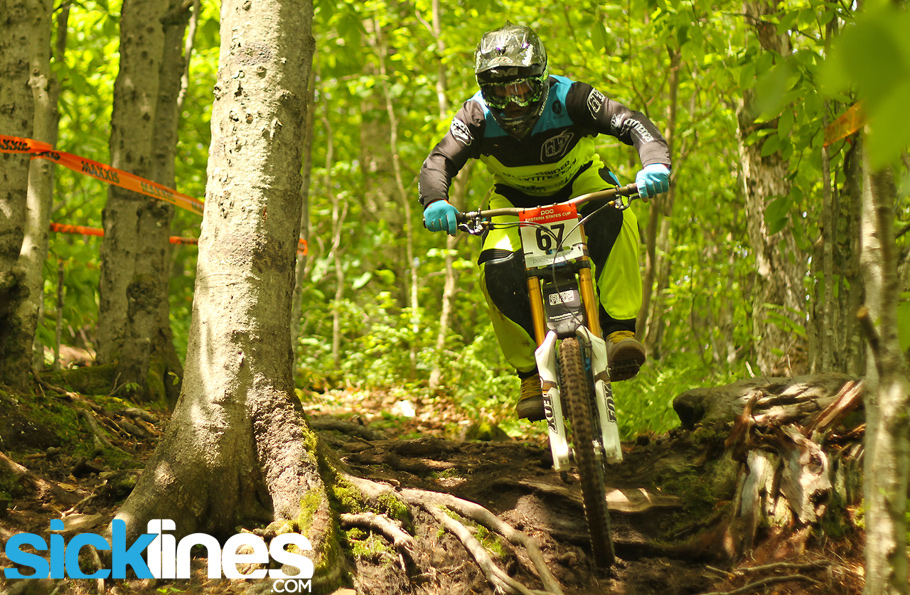 Ulmer tucks in tight before the POC road gap. 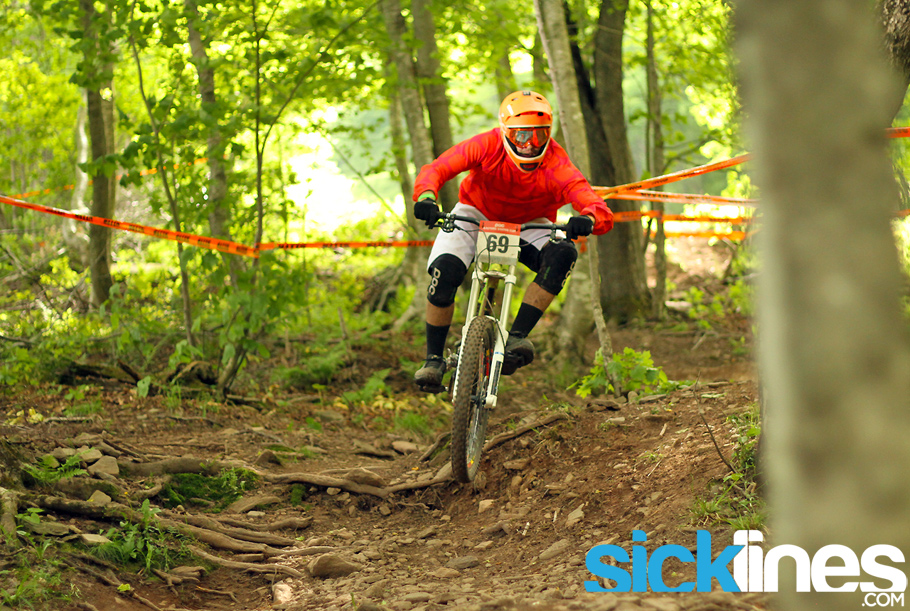 Adam Morse (11th) was determined to be fastest in the speed trap this round and below he tucks in tight near a tricky root towards the bottom of the course. 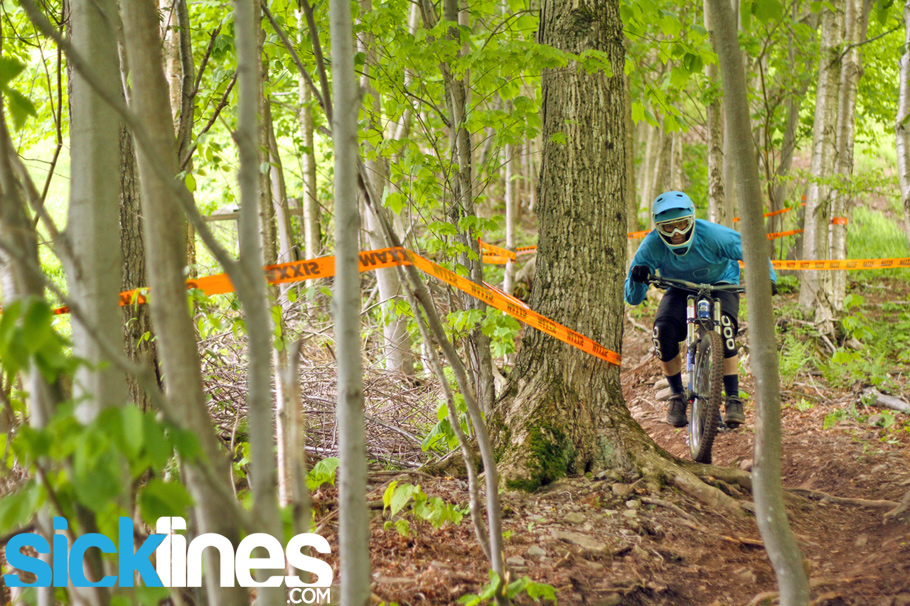 Voncooper rider, Philip Kmetz, claimed third place this weekend behind Gwin and Leov. Not a bad way to start out the season after his third place last weekend at Mountain Creek.

Gavin Vaughn also rides for Voncooper. He sniped fourth place and was looking fast on course all weekend.

Gavin knows how to ride roots

The One Ghost team riders were looking strong on course all weekend. Art Babcock would go on the take 8th with a 2:20.80. 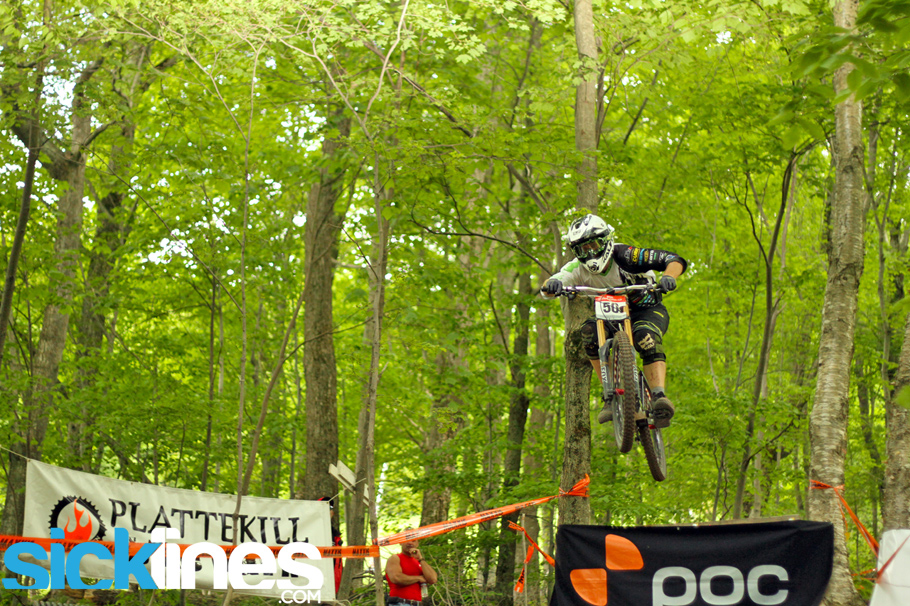 KHS riders Logan Binggeli and Kevin Aielo were riding well all weekend. They’re off to Val Di Sole, Italy, for the World Cup round next weekend. Kevin went on to take 5th place. 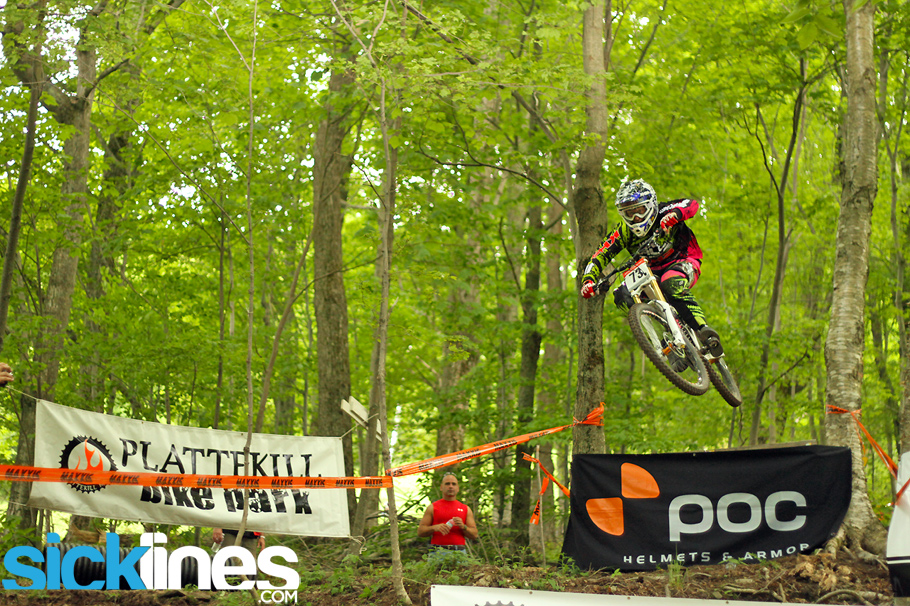 Logan makes his way across the POC road gap

Aaron Gwin leads the Pro GRT for the Pro Men

The Eastern States Cup series continues at Attitash Mountain next weekend. If you missed our ESC #1 coverage from Mountain Creek, be sure to check that out as well.