The Pro finals were fast and furious with everyone gunning for the top spot. Below you’ll find some highlights. Check the gallery for many more pictures. 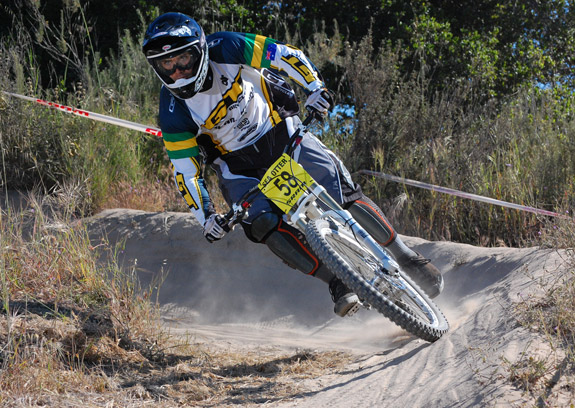 Mick is back this year and looks to have gained some speed in his year off somehow. He placed 2nd in last weeks World Cup in South Africa and took the win at Sea Otter this weekend from Greg Minnaar who won last year and came amazingly close to beating Mick this year. 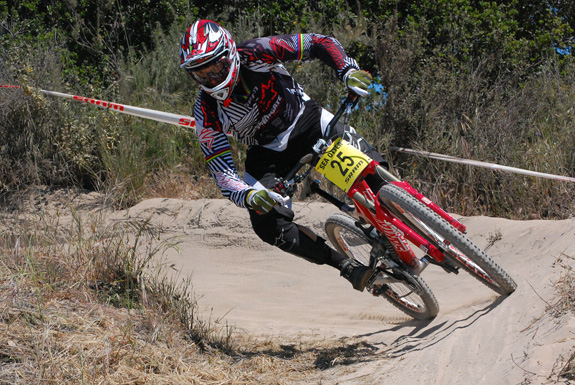 Greg Minnaar won here last year and looked strong in practice to take the win again. He was only behind Mick by a small margin. 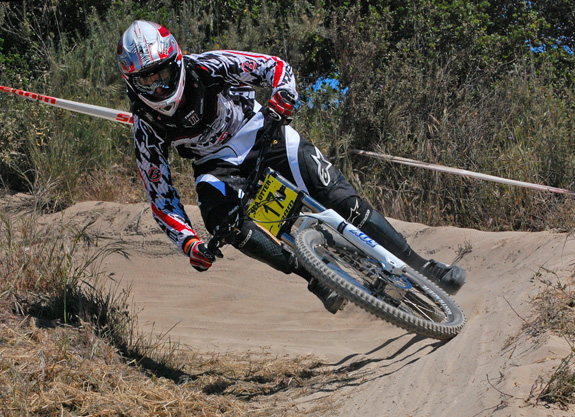 Neethling is on the Trek World Racing Team and has put in a lot of training in the offseason and it’s clearly paying off for him. 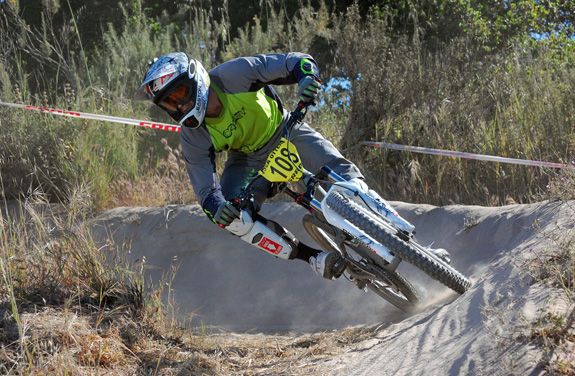 Lopes decided to skip slalom this year and race downhill. He didn’t have the best starting position as he had to start behind some slower riders which may have affected his overall postion. A 5th place is still a solid result for Lopes on this course given the caliber of riders present 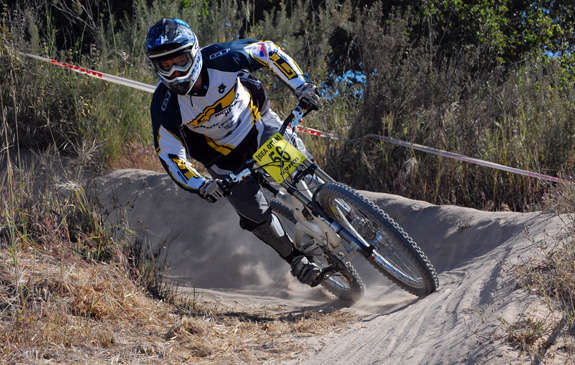 Eric Carter raced the downhill this year and seems to still have it in himself to remain competitive at 39. 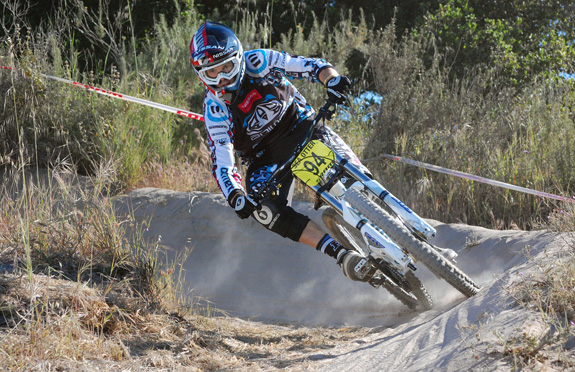 Dan put together a good run at Sea Otter to claim 7th place. His brother Gee also had a good shot at the win but crashed and then took it easy the rest of the way down the hill. 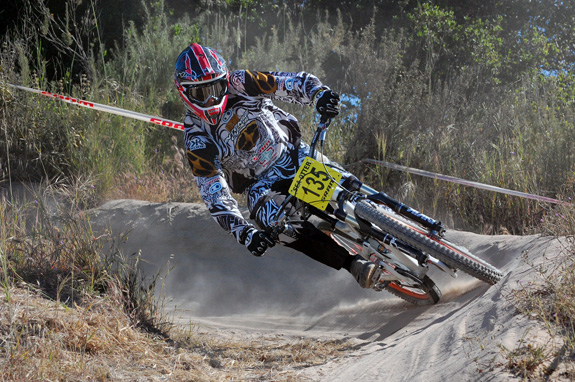 Bryn seems to be on a mission and had some determiniaton in his eyes all weekend. Don’t be surprised if you see Bryn on the podium this year more. He’s on a new program and is riding aboard Intense’s this year.

Rennie, aboard the Kenda / Morewood team this year put in a great effort at the Sea Otter downhill course. Rennie is a big guy and clearly knows how to put the power down. 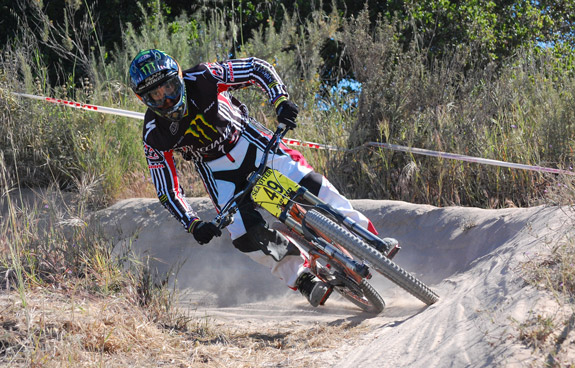 Sam Hill usually doesn’t try at Sea Otter, but this year he seems more dedicated to doing well and has put in work to improve his stamina on the flatter courses. Canberra is host to the World Cup this year and it’s clear Hill wants to do well. 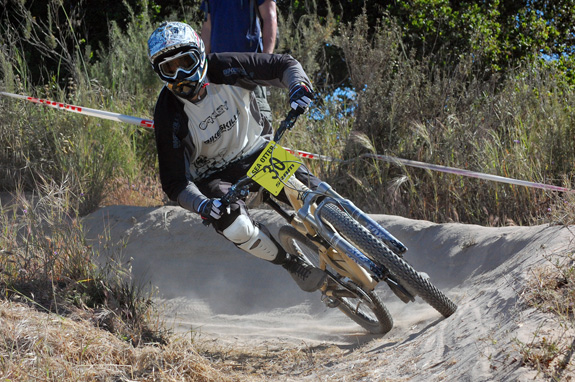 Joe showed up and put on a good show. It’s not every day you have multiple World Champions on a given course like this. 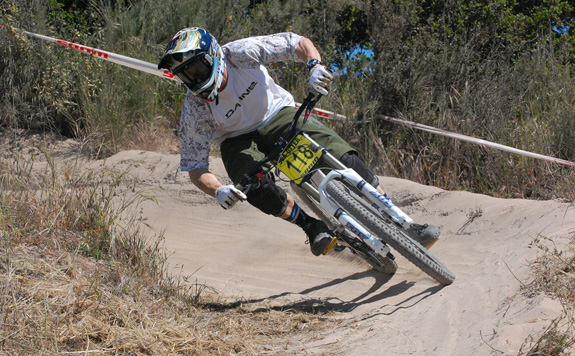 Lars Sternberg, aboard his prototype Transition TR450, put together a good run but had a few places where he felt he could’ve done better. Lars will be sticking to the Washington area this year. Look for Lars at the top of a podium near Washington. 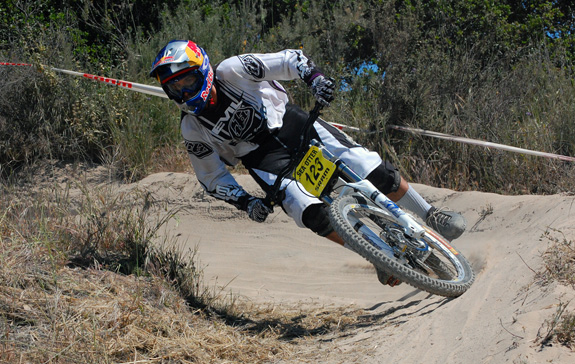 Steve Smith, aboard his Evil Revolt put on a good show for all. Still young and plenty of gas in the tank. He can win on any day. Steve Smith is a name to remember 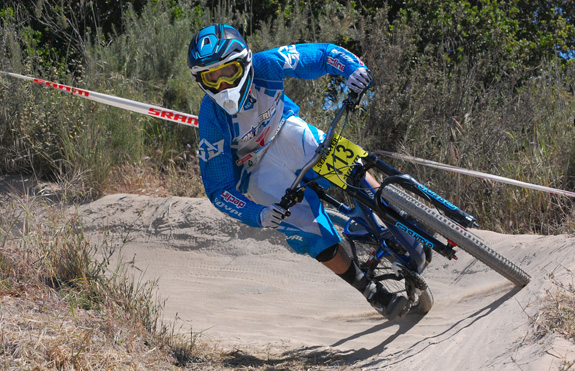 Neko, only 16, is one of the fastest Juniors and is aboard team Decline / Specialized this year. He had a pants’ malfunction during the finals. Neko has a lot of potential to put an American racer on the podium at any race he enters. 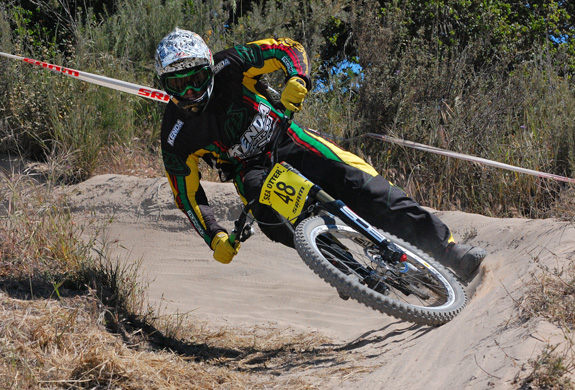 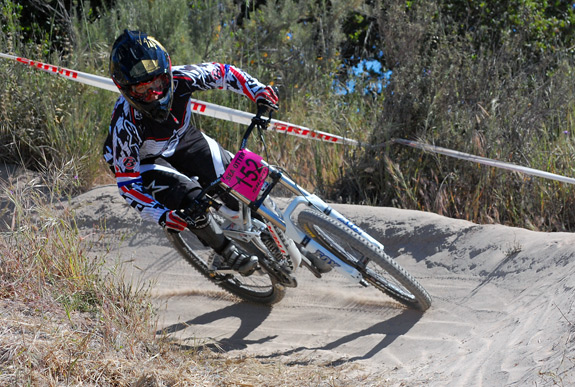 Tracy, also aboard the Trek Team this year has shown she is here to win this year. Tracy put in a strong run against a lot of fast women at Sea Otter this year. She will definitely be a contender for the World Cup Overall as well as the World Championships.

Practice has been going on since Thursday on the Downhill. Below are a couple of pictures from the Pro practice session’s. 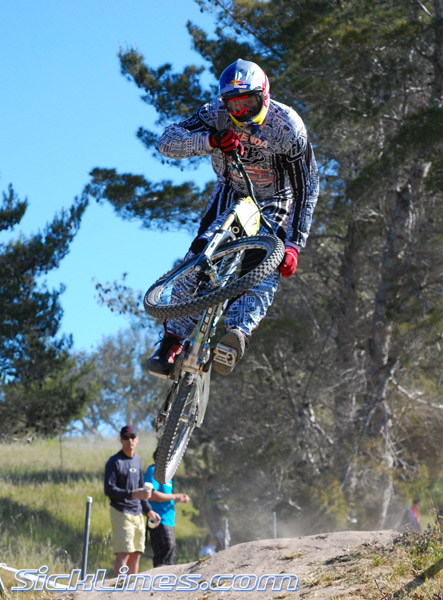 Nathan Rennie, on the Kenda Morewood team this year, was throwing down some style and was starting to get up to speed on this dry Sea Otter course. 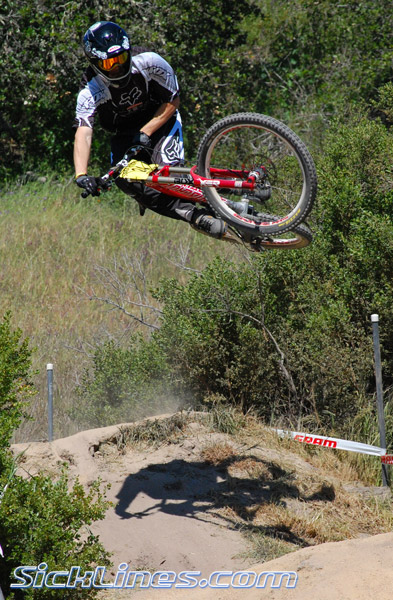 Kirt Voreis, part of the Santa Cruz Syndicate, doesn’t do too many races but when he does he still is competitive and always has some nice style. 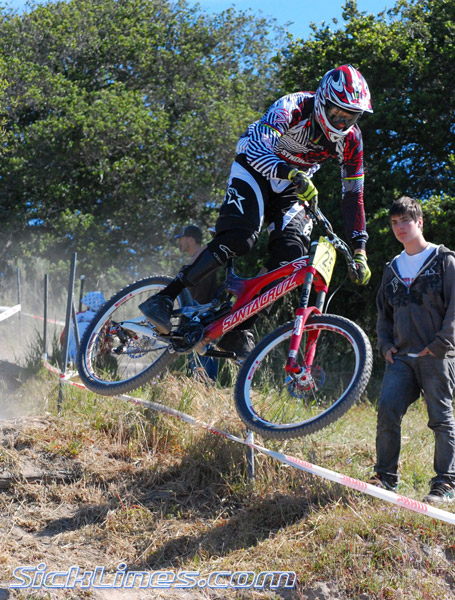 Greg, also on the Santa Cruz Syndicate, won here last year and it’s clear he knows his way around the course. He was looking fast in practice during the few run’s he took and will be a threat come race day as he prepares to defend his win. 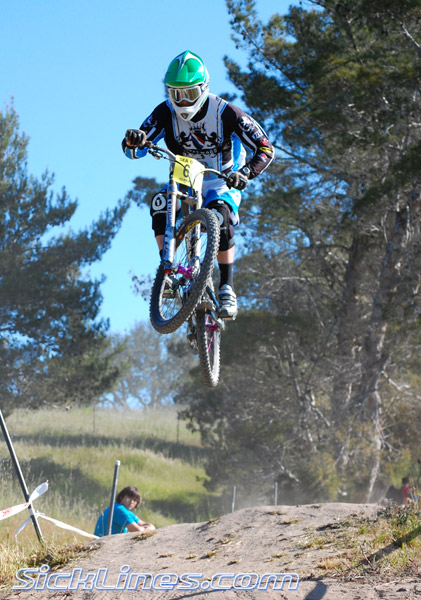 Geritt, 2008 USA National Champion, rides for Morewood USA and has got his Makulu working nicely on the course. Geritt has had good results here before so we’ll see what he can do come Sunday 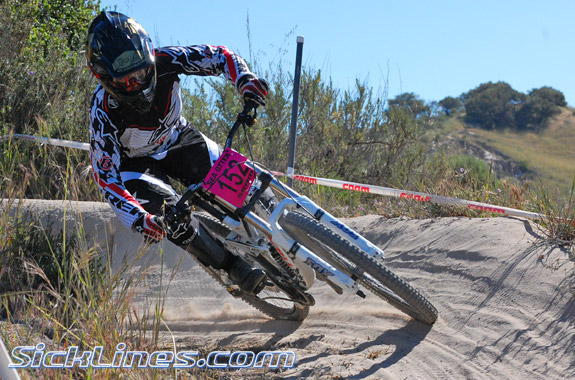 Tracy, part of the Trek World Racing Team, is aboard a Trek Session 88. She has a strong chance at pulling out the victory on Sunday. It wouldn’t be surprising to see her beating out some of the men in the finals the way she has been moving on the course. 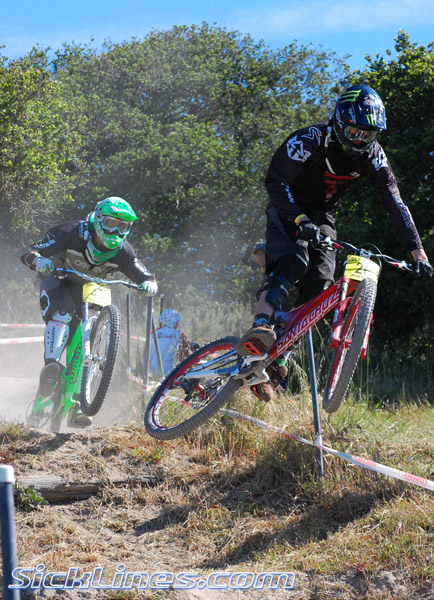 Gracia’s knee is a little knocked up but he’s still doing runs and enjoying himself. Here he trails Josh Bryceland of the Santa Cruz Syndicate off a jump 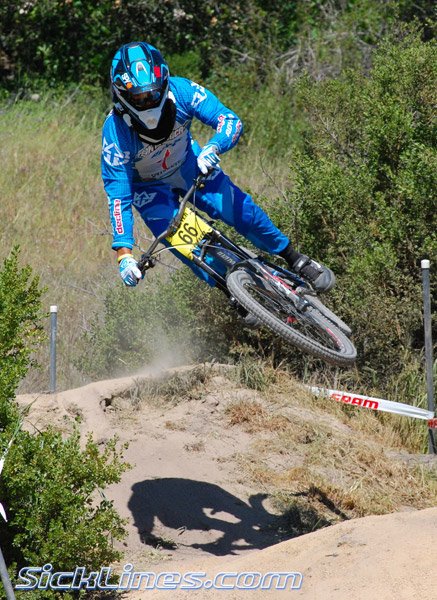 Cody Warren is always a threat on course and this year is no different. Aboard the Specialized Decline Team America team this year he’s ready to roll 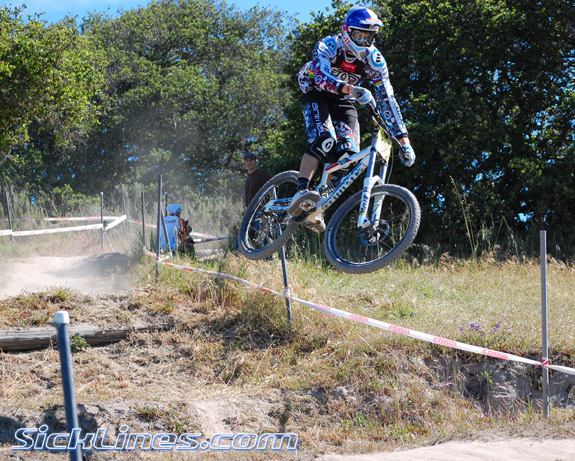 Gee is in shape and looking good on course. He’s been attacking the course from the first day and has shown he has what it takes to place well here. 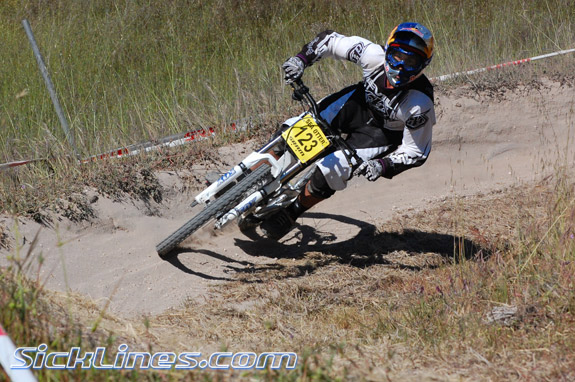 Steve Smith, part of the MS-Racing team this year, is riding the new Evil Revolt. In the rougher sections he seems quite poised and comfortable. Keep an eye out for him come race day as well. 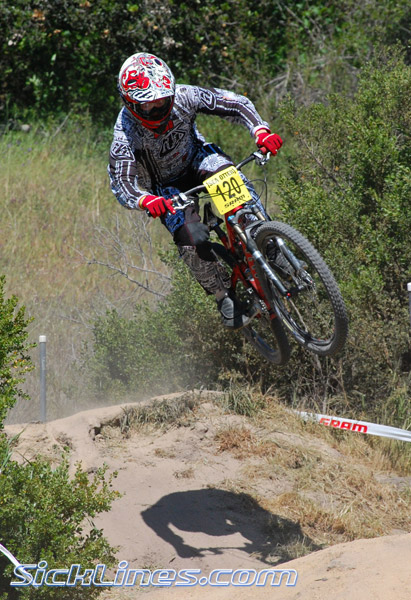 J.D. Swanguen is riding one of the new Intense Tazer VP’s (as well as the x-fusion / Intense team) here and they seem to be handling the course well.