Helmet Camera
Embedded above is a compilation of helmet camera footage we captured at Windham. It shows most of what the place has to offer feature wise. Helmet cameras can be deceptive in showing scale, difficulty, and trail details so take it with a grain of salt.

Windham Mountain is an established mountain biking destination with annual races held there each year. In past year they’ve held the East Coast Nationals while this year they hosted both a Gravity East race and ProGRT/Kenda Cup/Yankee Clipper race. Next year they will put on their biggest event yet hosting the final round of the UCI World Cup series before the World Championships in Mont Sainte Anne, Quebec. Unfortunately, the mountain is only open for riding during racing events. 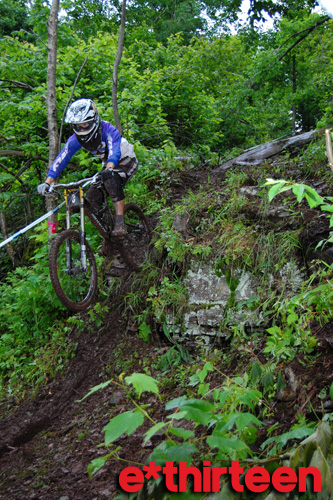 Both the Gravity East and ProGRT downhill races used most of what the course will be for the World Cup. There have been some changes over the summer adding a large wooden bridge and finish jumps with more additions to come as the World Cup race approaches. The course has fast sections with good flow as well as a few technical areas to separate riders on it’s ~1200ft of descent. At this point there is no large long rock garden but don’t be surprised if one doesn’t make it into the final course design. 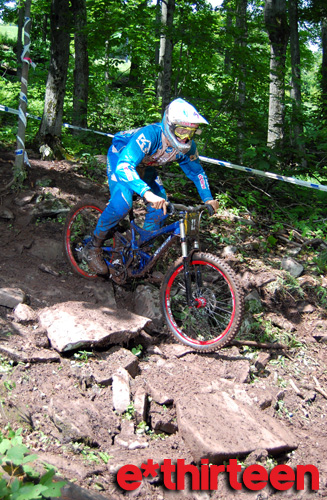 In dry conditions the course is very fast and can have good flow, however, if it rains the mountain turns into quite the mud bog with lots of standing puddles and very muddy trails. Winning times in dry for the Yankee Clipper / Kenda Cup race were a hair under 3 minutes while in the wet of the Gravity East race times slipped to over 4 minutes. 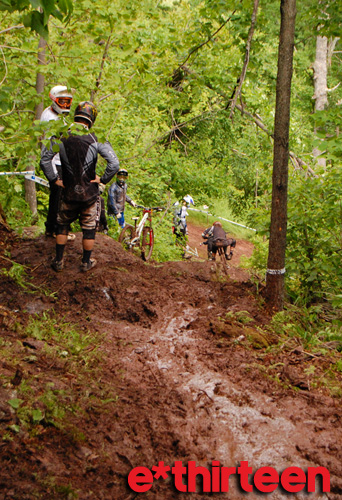 mud was prevalent during the Gravity East race (click to enlarge)

For those that like to ride and race 4X and dual slalom Windham has one of the most massive tracks you’ll see in the U.S. The course has a lot of elevation drop with it’s own lift to send riders to the top. It sports large berms and table tops with lots of room to rub elbows. The courses itself actually intersects the XC course where they’ve built a tunnel for the XC riders to run through. 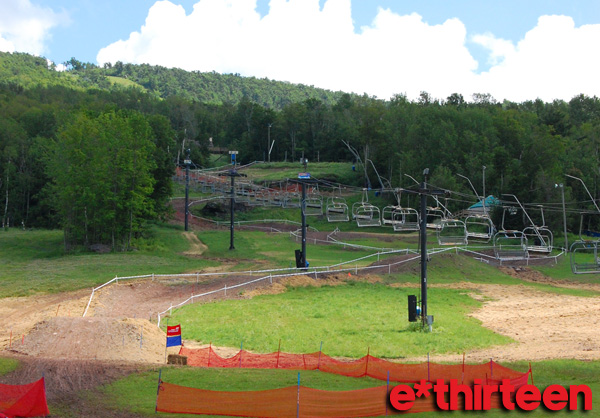 Windham also has a long and exciting Super D course. Times for pro’s were around 9 and half minutes. Windham has extensive cross country courses which work their way up and down the mountain across the entire face crossing many ski trails and wooded sections. It features some nice man-made bridges, one of which is 108 ft long.