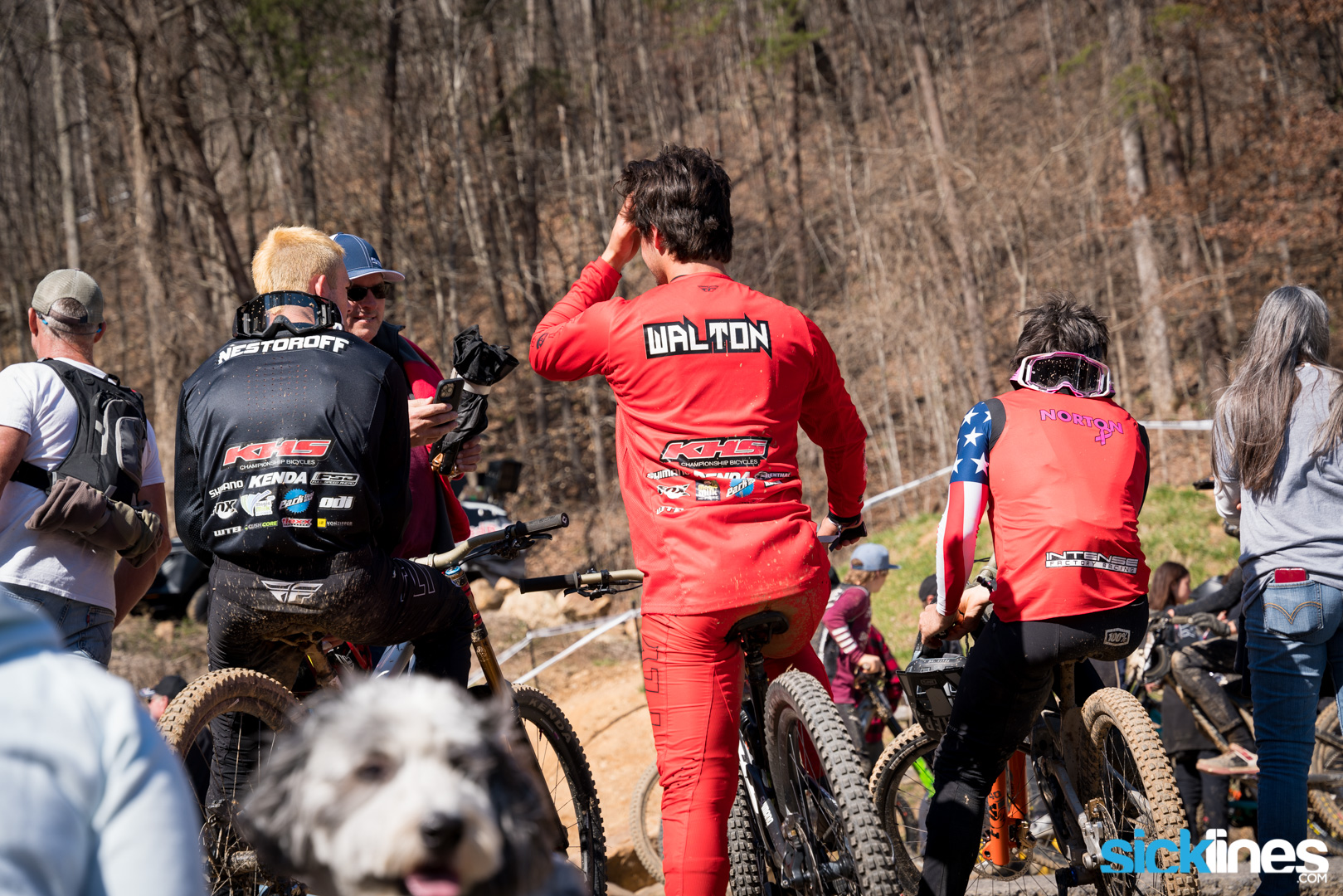 The skies opened up in the afternoon to provide challenging terrain for the Elite and Pro racers.

The morning kicked off with the amateur and master downhill riders taking to the track. Earning gold in the Women 19-29 was Celia Ferguson (Evergreen, Colo.), who finished her run in a time of 4:50.99. Taking the win in the Men 19-29 category was Jake Green (Conifer, Colo.). He completed his run in a time of 3:44.64; that time would have also placed him in the top 20 for the Pro Men.

After a rain delay, the Pro Men and Women would eventually head to the top of Trestle Bike Park to start their race runs. Earning the stars and stripes for the second year in a row, Kailey Skelton (San Marcos, Calif.; KHS Factory Racing) barreled down the hill to finish in a time of 4:15.34. When asked about her run, she said, “It was pretty surprising. It was a little more slippery and wet than I had thought it was going to be. Throughout the middle of the run, it definitely got pretty slippery in some of the rocky sections. I had a pretty good mess up at the top but tried to circle back, got my focus back, and just got my head back in the game.”

On the Pro Men’s side, returning national champion Dakotah Norton (Clinton, Tenn.; Intense Factory Racing) was focused going into the race. Knowing the pressure was on after seeding first in yesterday’s racing, he would have to stay on the gas if he wanted to beat Aaron Gwin (Hendersonville, Tenn.; Intense Factory Racing) in the final run. Norton ended his day on top with another gold medal. He rode an immaculate race. His final time was 3:28.81. When asked about what’s ahead this season, Norton said, “I have a new bike and a new team behind me, so I am stepping back into the world cup with Aaron [Gwin] this year, and I think the energy will be super high. I’m excited to take the confidence that I built this week and try to roll that into next week in Snowshoe.”

Other Downhill Champions include:

A complete list of results from this week can be found here.

The Men’s U23 riders were next on course. It was a place switch after Saturday’s cross-country event for the group, with Brayden Johnson (Littleton, Colo.; Bear National Team), who took silver in the longer distanced event, crowned national champion in the short track, and Saturday’s champion, Bjorn Riley (Boulder, Colo.; Trek Vaude), took home silver today.

As the clouds began to move in, the Elite Women took to the short track course. After settling in during the first couple of laps, a group of four riders, including Kate Courtney (Kentfield, Calif.; Scott-SRAM MTB Race Team), Savilia Blunk (Inverness, Calif.; Orange Seal Off-Road Team), Kelsey Urban (Kentfield, Calif.; Team 31), and Gwendalyn Gibson (Ramona, Calif.; Norco Factory Team), eventually pulled away from the pack and created a significant gap. After an attack on the uphill, Courtney was focused and hungry for the win. In a massive push at the end, she solidified her lead on the final gravel section and pedaled into the finish as the national champion.

The Elite Men were the final racers to take on the short track course. Similar to the women’s race, a large group of riders stuck together for the first couple of laps until Eric Brunner (Boulder, Colo.; Blue Competition Cycles) decided to take a solo flyer. Several riders, including Christopher Blevins (Durango, Colo.; Specialized Factory Racing), Stephen Davoust (Durango, Colo.; Giant Factory Off-Road Team), Howard Grotts (Durango, Colo.; Specialized), and Keegan Swenson (Park City, Utah; Santa Cruz Bicycles), reeled him back. Swenson realized he had a slow leak in his tire and began scrambling to find a solution to fix it. Russell Finsterwald (Colorado Springs, Colo.; Specialized Off-Road) offered a cartridge, but the leak would be race-altering. Ending the day on the top step was Blevins after he pulled away from Davoust, Finsterwald, and Grotts.