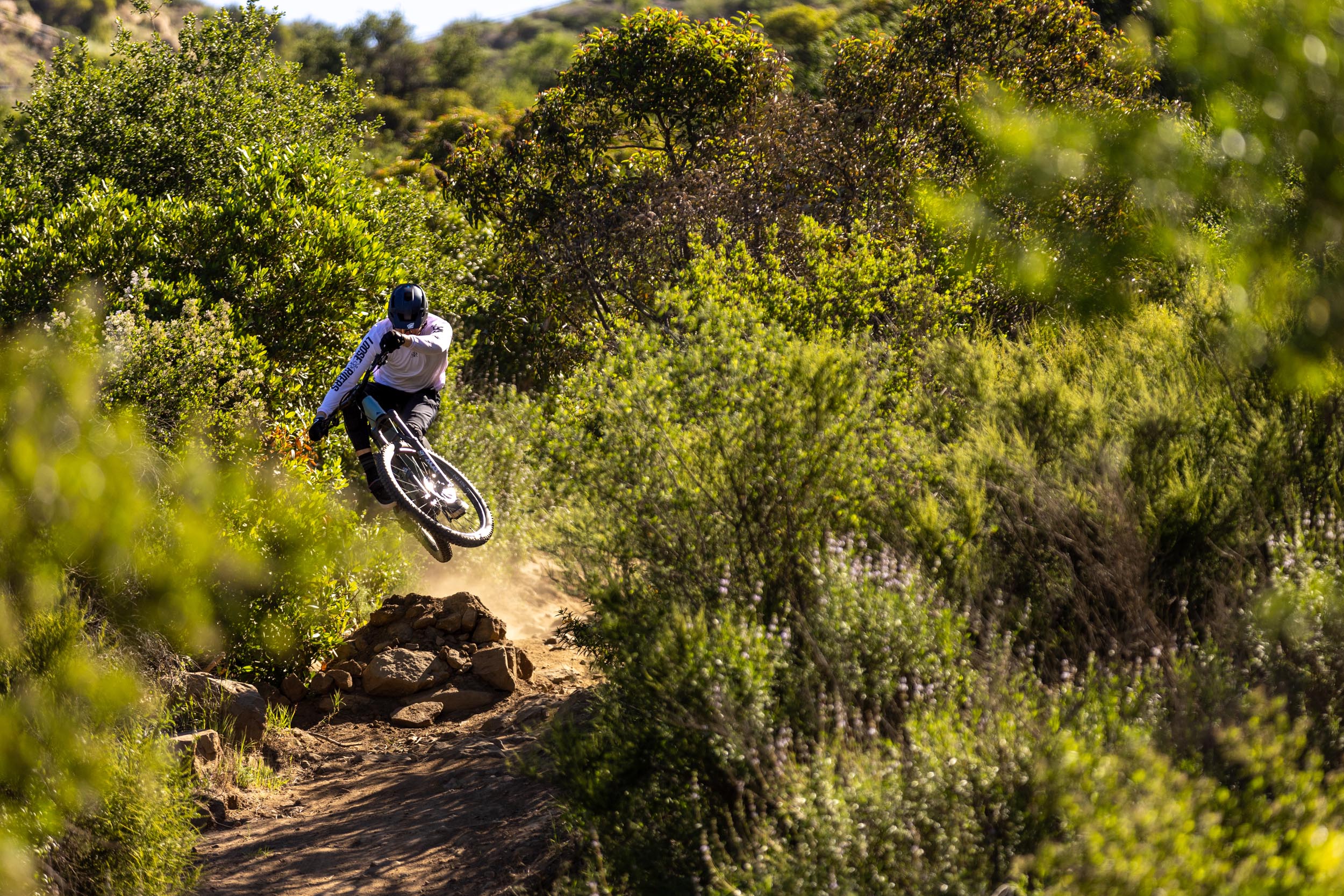 KOBLENZ, 5 APRIL 2022, 11:00 (CEST) — FUN:ON – More range, less weight, more stoke – the all-new Canyon Spectral:ON is the ultimate E-MTB allrounder for all those who can’t possibly have enough fun. Featuring a massive 15% or even 42% increase in range thanks to brand new Canyon-engineered 720Wh and 900Wh batteries, a total weight of just 21.8kg / 48lb (Spectral:ON CFR, 720Wh battery, size Medium), 155mm of travel in the rear and 150mm of travel up front as well as a mullet-setup, the Canyon Spectral:ON is one of the lightest, most dynamic “full- size” E-MTBs on the planet – even with the massive increase in range.

Getting the balance between great range and playful ride quality right is not easy. Some even think it’s impossible. Strapping the biggest possible battery onto a bike doesn’t equal instant awesome. In fact, adding more cells to a battery generally adds more weight to the frame. The end result can be a top-heavy, unbalanced bike that handles with all the grace and precision of a high-speed train wreck. As that doesn’t sound much fun, Canyon went an entirely different route with the new Spectral:ON and designed a completely new frame as well as developing a novel battery cell architecture that boosts both your range and ride quality. The result is an e-mountain bike that gives riders the two things they want most—outstanding ride quality and the power to ride all day long.

Lighter. Stiffer. Stronger.
Starting from scratch, Canyon completely redesigned the Spectral:ON’s frame and cleaved massive weight from its chassis. The new frames are now fully carbon, gaining a carbon rear triangle for the first time. All-new carbon layup schedules and an even more efficient frame architecture enabled Canyon to gain strength while shearing grams. Next to the CF frame that now only weighs 3,180g/7lb, the Spectral:ON platform also received the CFR treatment for the first time which resulted in a frame as light as 2,880g/6.3lb. However, stiffness, durability, and core frame features remain the same across both the CFR and CF frame platforms. The weight savings on the CFR frame were achieved purely through material and layup differences. Furthermore, as befits a bike that’s designed to be rallied hard on the roughest trails, both the CF and CFR frames now meet even higher and more rigorous “Category 4E” strength and impact resistance testing standards.
*Prices may vary depending on country

That same drive to make a truly bombproof beast led Canyon to bolster the rear end stiffness with the addition of a new seatstay bridge and the adoption of burly ball bearings that now revolve around massive 15mm thru-axles at both the main and seatstay pivots. The obvious upside is suspension that remains smooth in crappy conditions and outstanding durability. A less obvious (but no less important) benefit is a noticeable boost in handling precision as the stouter connections between frame members boost rear end stiffness—something riders will appreciate when pushing the limits of speed and common sense.

By arranging the battery cells horizontally, Canyon created a more compact and efficient battery layout. The battery placement within the frame itself was also optimized by tilting the Shimano EP8 motor upwards at a 30-degree angle.

This allowed Canyon to tuck the battery lower within the frame – in front of the motor instead of above it. The end result is a lower center of gravity and an evenly-balanced weight distribution that makes the Spectral:ON an absolute ground- hugging, corner-schralping ripper of a bike with the power to go all day long. Thanks to its massive 720Wh or 900Wh battery, the Spectral:ON casually eliminates range anxiety with a 15%/42% boost in capacity over standard batteries.

Let’s cut to the chase—yes, the new Spectral:ON is longer, lower, and slacker. But, no, this isn’t the slackest, longest, most progressive E-MTB on the market. And with good reason—Canyon wasn’t aiming to build an E-Gravity or E-Enduro bike. The Spectral:ON was created to be the ultimate all-rounder—a bike that’s equally at home on steep and technical trails as it is on flowy singletrack and the occasional bikepark visit.

The magic recipe? The Spectral:ON’s reach has grown by 25 millimeters per frame size to create a more balanced and centered feel on steep descents. Additionally, the head angle was slackened by a degree while the chainstays grew by a modest 5 millimeters to increase stability and overall balance. Lastly, Canyon lopped about 20 millimeters of length from the seat tube to create more room to maneuver when things get rowdy and to allow riders more opportunity to run longer dropper posts. Combined with the lighter and stiffer frame and the mullet wheels, these modest (but significant) changes create the Spectral:ON’s trademark lively and playful ride quality while simultaneously boosting its high-speed stability and confidence on steep, sketchy tracks.

They say that an e-mountain bike with outstanding, playful ride quality and massive range is impossible. We beg to differ. The all-new Spectral:ON is proof that you can have your cake and eat it too. FUN:ON.
Availability
Both the Canyon Spectral:ON CFR and Spectral:ON CFR LTD are available in all markets outside of the United States as of right now with the three CF models following in May. To start things off, both CFR models will only be available with the large 900Wh battery. Riders will be able to choose between the 720Wh and 900Wh battery option on all CF and CFR models from May. All size Small Spectral:ON models are limited to 720Wh batteries due to the size of their down tubes.

Canyon USA, on the other hand, expects to have Spectral:ON CF models in late spring and should have CFR models in the Fall of 2022.

The Spectral:ON CFR (21.84kg with 720Wh battery/22.75kg with 900Wh battery) features top-of-the-line Fox Factory suspension comprised of a Fox 36 Factory Grip2 fork with 150mm of travel at the front and a Fox Float X Factory shock providing 155mm of travel at the back. The Reynolds TRE309 carbon wheelset of the Spectral:ON CFR is driven and stopped by Shimano’s legendary XTR group while a Fox Transfer dropper post moves the saddle out of the way. The build is rounded off by an in-house cockpit by Canyon that features partially integrated cable routing to create an extremely clean look.
*Prices may vary depending on country 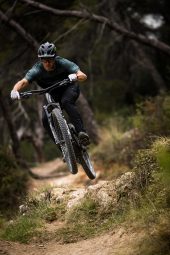 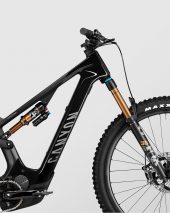 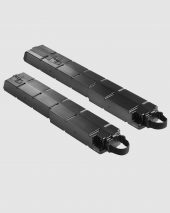 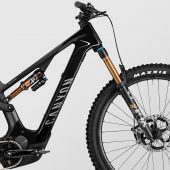 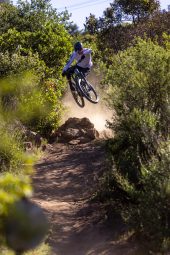 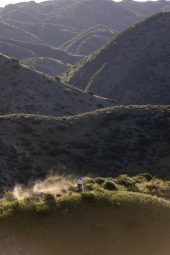