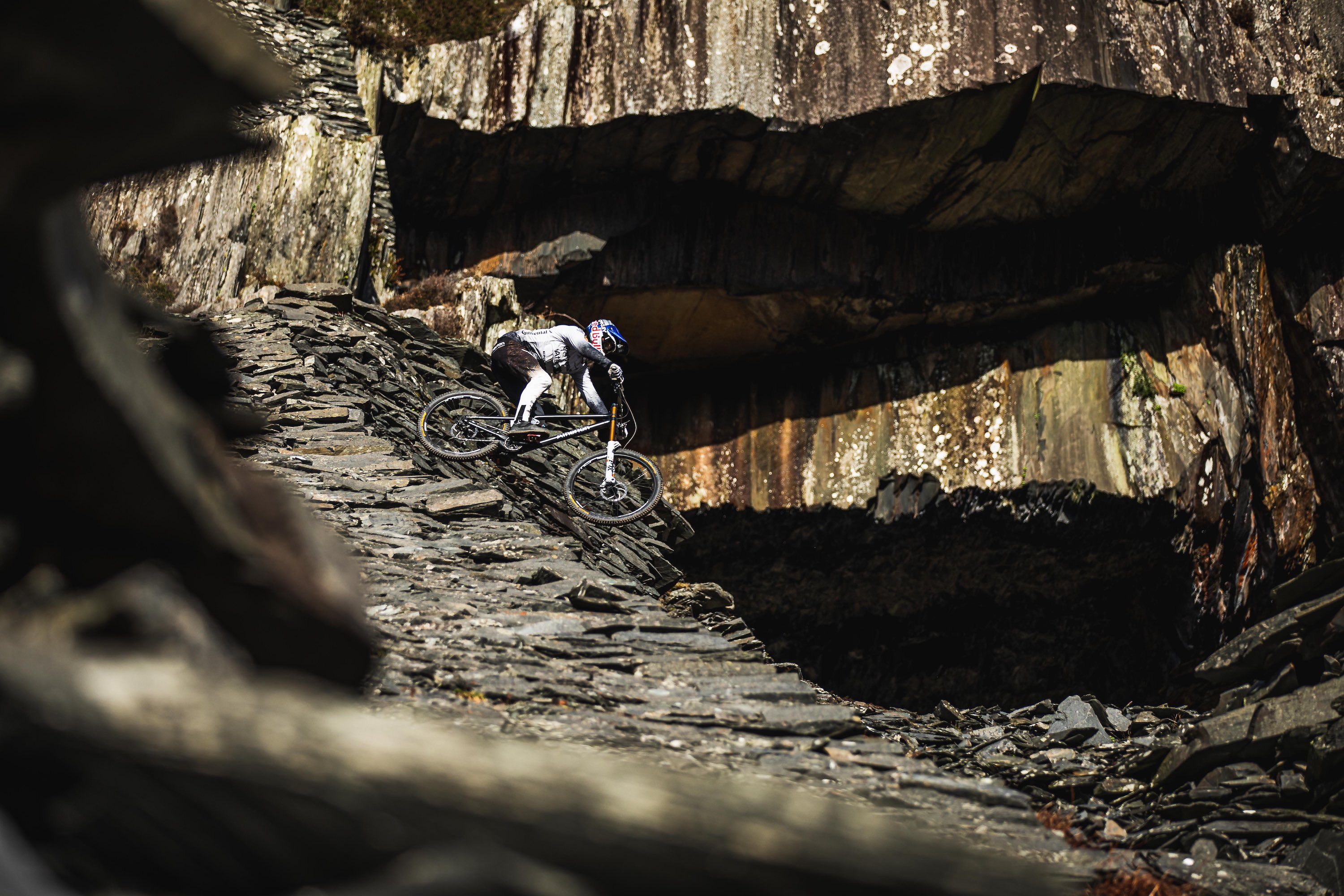 The Slate Line is the brand new edit from Gee Atherton, the World Champion mountain-biker renowned as one of the toughest and most daring riders in the sport. Following hot on the heels of his death -defying and spectacularly exposed “the Ridgeline” Gee tackles a new line at a disused slate quarry in Wales. In his constant quest to progress the sport Gee sets out to conquer a moving mountain with one of the biggest gaps he’s ever jumped and a super-sharp surface where any mistake will not be forgiven.

Tune in on Tuesday, April 6th to see a feature on Gee Atherton’s bike.

Gee Atherton has released a new edit today that will have you on the edge of your seat. The Slate Line at Aberlleffeni’s Wincillate quarry boasts bigger gaps than “The Ridgeline” and the slate scree presents a constantly moving surface that can cut a rider to shreds. Mistakes are not an option.

Play it loud for the full effect of tyres on slate.

Gee said “It’s such an intimidating spot to turn up to; as soon as you arrive and start hiking up you just feel like you’re going to slide off the edge or fall down a mine, there are cliffs everywhere 4,5,600 feet drops…

It’s like the mountain is never still, fragments of slate are constantly breaking free, every step starts a mini avalanche and it’s kind of eerie, super quiet except for the odd crow. There’s a mortuary at the bottom of the track – one of three small stone buildings, I’m glad I didn’t know what it was till we were finished filming.

The fear at the top of this line is incredible – you’re balanced on the edge of this mountain and you feel like as soon as you start moving you’re just going to get carried to the bottom and smashed to pieces and there’ll be nothing you can do about it.

We’ve been aware of this place for years, I drive past it all the time but we’ve always dismissed it as too gnarly, too dangerous. Then one day in January I was driving past with Jamie (Robertson, a key member of the Red Bull Hardline dig crew) and just on the spur of the moment we hiked up there and began to think just maybe it would be possible.

Building a line like this is very much a process. The initial reason I’m drawn to a location is that it’s unique, spectacular but it seems that’s likely to equal ridiculously difficult! I’ll always stand at the top and wait; piece by piece the line reveals itself, it shows itself in segments, gradually, you have to tease it out, very slowly a possible line crawls out of the mountain. 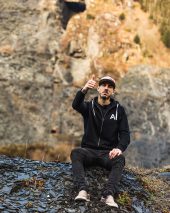 The next step is to hike back up here with the crew – I rely on them a lot, they’re all great riders and experienced builders and they bring a lot of creativity.

The step down at the bottom is one of the biggest gaps I’ve ever hit – 81 feet we measured, and it’s complicated by the fact that as soon as you start to move, the whole surface of the mountain starts to move with you. It’s like an avalanche trying to drag you down and super-sharp shards of slate are flying up everywhere.

It’s a huge mental challenge not to ride defensively, you drop in and it’s so tempting to lean off the back and skid slowly down but you haven’t enough control like that. I had to hit it hard, like it was a DH track, force myself to ride faster, to attack, pushing my front end into stuff.

Test day was so gnarly – Dan had come down to help me and I could tell that he was anxious, it wasn’t the actual size of gap that worried him, the take-off there is pretty blind and the landing is narrow, a case on there could have cut me in half.

The bike felt sick, absolutely amazing, it’s like you’re totally connected to every tiny bump in the trail, the DW6 suspension platform gives you loads of sensitivity at the top of the stroke which is vital with the amount of small, loose bumps, but you still have the support you need for the massive hits. Projects like this and the Ridgeline are a great way for me to demonstrate the bike’s capabilities but it works both ways – having that bike that we’ve designed and manufactured ourselves gives me a lot of confidence – the last thing I can afford is for doubt to creep in .

When you look up from the bottom of the track you can see the whole mountain, top to bottom and it stares down at you. I look up, I look at my bike and there comes a point when I know that I’m going to do it, I’m going to conquer the mountain and it feels like the perfect progression from the Ridgeline, I remember how much I love needing to bring my A game and that’s all I need.

Special thanks to @ContinentalMTB @RedBull