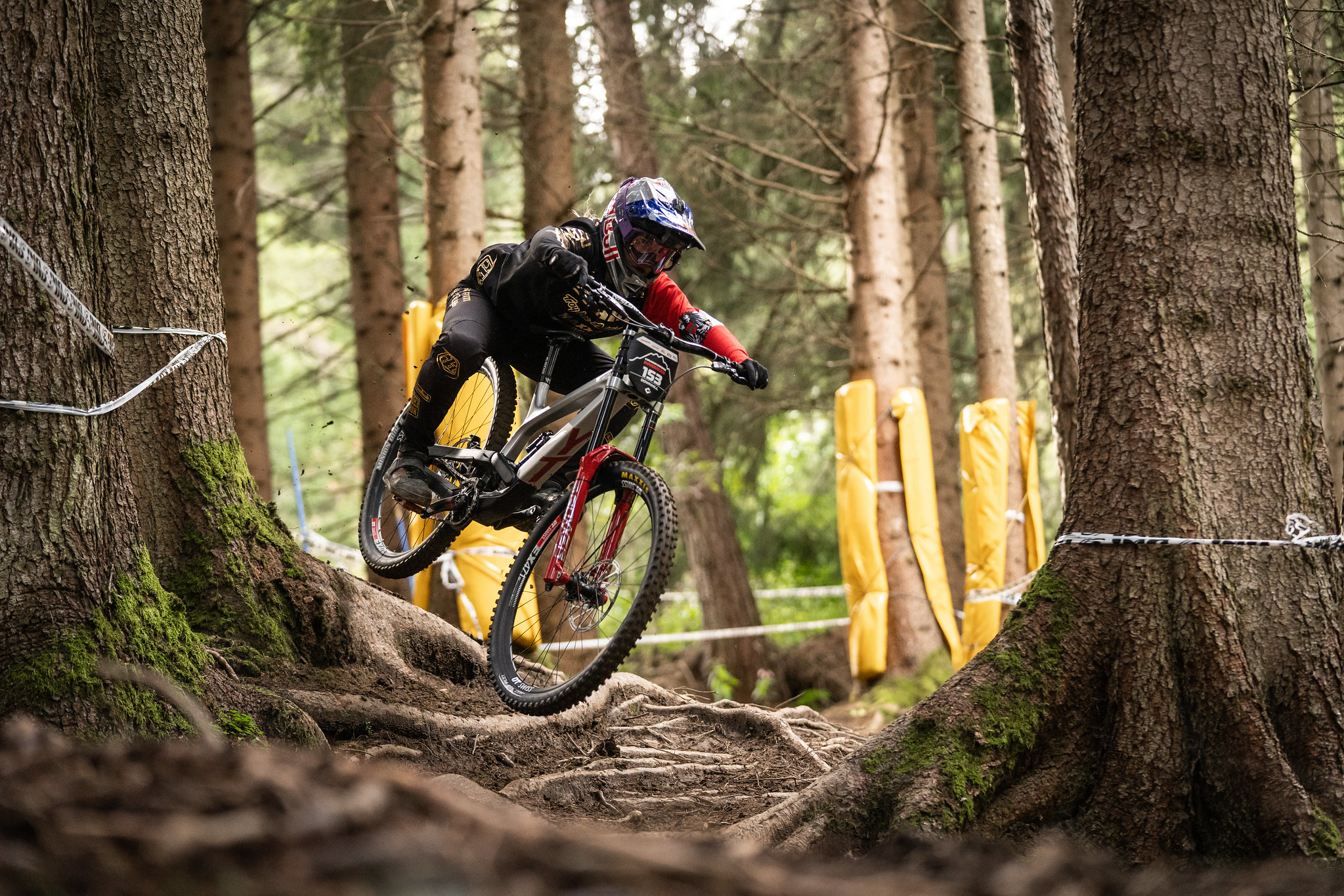 Vali Höll and David Trummer share top of the box on home soil, while Brook Macdonald gets loudest cheer of the day in his first race back from injury.

INNSBRUCK, AUSTRIA, October 4, 2020 — Austria couldn’t have asked for a better result in the final event of Crankworx Innsbruck 2020. The top of the pro podium was shared by two Austrians: David Trummer crossed the finish line fastest for the men with a 2:49.08, while Valentina ‘Vali’ Höll bested the pro women’s field with her 3:12.13.

For Höll, this is her second win in the event, though 2018’s #1 came in the U19 category. Today marks the first elite DH podium she’s topped.

Charging over the final drop and across the finish line, her time pushed her into the hot seat. But with three heavy-hitters set to drop after her, including Tracey Hannah who’s won the event three times, the pressure was on.

“It’s actually terrible,” she said, laughing, of the feeling of waiting to see how her time would hold. “In Juniors I was always the last, so I never had to wait. Now, waiting for riders and seeing how close, and actually you have no idea because I couldn’t see any split times, it’s totally nerve-wracking. I don’t like the feeling.”

“I hope in the qualifying I can always be first,” she added with a smile.

In the end, Hannah’s time was +0.951 behind the Austrian, placing her in second.

“It’s been a super weird year,” said Hannah, who also holds the Crankworx Downhill Champion title. “I’ve never been in Europe in October. I’m not super used to the weather… But I had a good race.”

“It’s really weird to be back racing,” the Australian added. “You’re not used to the feeling of racing, so it’s hard to get into that spirit and that rhythm. It’s really good to have this race before World Champs next weekend, and it’s been really fun to be back at Crankworx.”

Third went to French rider Morgane Charre, who adds to her gold medal from earlier in the week in the Dual Slalom.

Following the Pro Women, a tight field of top men took to the track.

Trummer’s speedy run pushed the USA’s Charlie Harrison out of the top spot but, like Höll, his hold on first place was far from guaranteed with Mick Hannah, Ed Masters, Laurie Greenland and Brook Macdonald still to go.

But hold his time did, with the final four unable to catch him.

It was a feeling echoed by Höll, who said to race at home, and be back with her peers and supporter crew, is something special.

“My team is finally here,” she said, of the long hiatus in racing. “I’m pretty happy to see my mechanic. I haven’t seen him for about a year… It’s like my family is back together.”

“It was really good,” said the Kiwi rider of his race run. “We thought it was going to be quite muddy, but the track dried out perfectly. It was really fun. Stoked. I haven’t raced Downhill in 13 months, because I had an injury at the end of last season, so this is good for the confidence, and I’m just stoked to be back on the big bike, going fast.”

Harrison would finish his day in third.

“It’s a huge blessing to have a solid race going on. It was an amazing weekend,” said the American. “It’s nice to just get back to the races and be with the team and get into the race routine again. You spend so much time at home riding your local trails, so it’s nice to come and test yourself against all the fast guys. I’m very excited to get a good result in.”

“The last few bottom corners were pretty challenging after all the rain,” he said of the conditions. “Those were pretty key to get a solid result.”

“It dried out really well,” added Höll. “I thought it would be way more slippery. I was super stoked. I like the track a lot, it’s actually the first time I raced it ‘cause last year I was injured.”

Last to drop, a rider who said he felt like he had the weight of the world on his shoulders.

As Brook Macdonald charged toward the finish line, +5.295 seconds behind the leader, a roar of cheers erupted, by far the loudest of the day. Considering the size of the crowd (essentially non-existent, made up of staff and athletes), the buzz communicated the excitement of the moment.

“It was pretty emotional to be honest,” said Macdonald, who hasn’t stepped between the tape since August 2019 when he sustained a spinal injury in training ahead of the Mont-Sainte-Anne World Champs. “Having these people around me…it just shows how much support is out there. It was definitely the highlight of my weekend coming across the finish line and having so many people cheering for me. It was pretty amazing.”

Coming into today, the Kiwi rider was the defending champion, as well as the currently Crankworx Downhill Champion. While today’s 11th place finish may not have been his hoped for result, he said given all that’s happened in the past year, he’s keeping in perspective.

“To be racing again is a pretty massive achievement in itself.”

Replays from all the action from Crankworx Innsbruck are available on Red Bull TV: https://www.redbull.com/int-en/events/crankworx-austria