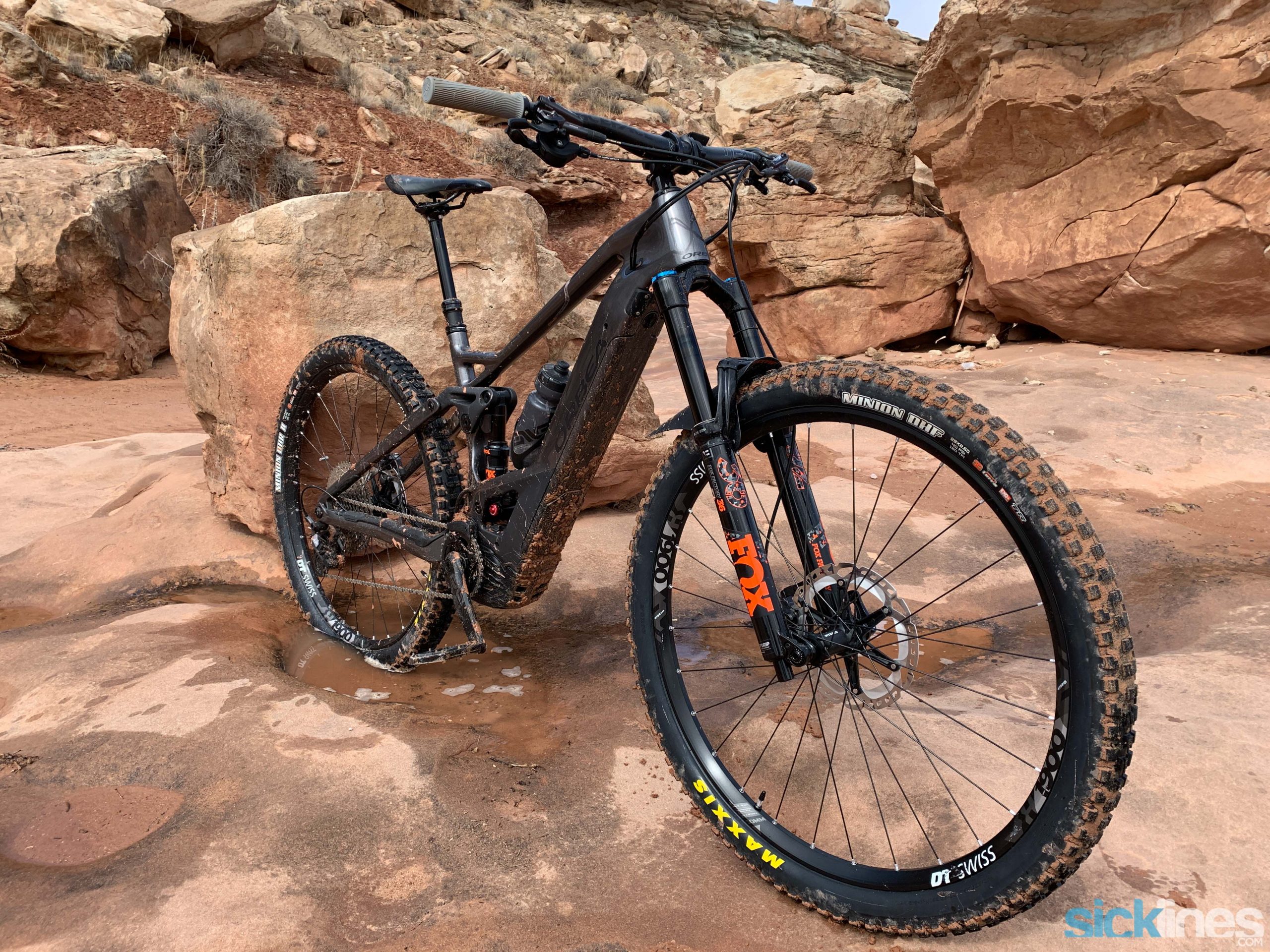 Shortly before COVID-19 descended upon us, I was was lucky enough to spend a day in Moab aboard Orbea’s new Wild FS. While I didn’t log nearly enough miles for a comprehensive review, I did gather some solid first impressions of the Spanish brand’s all new all mountain e-machine. In a radical departure from the outgoing model, the 2020 Wild FS has been fully modernized with 29″ wheels, 160 mm travel front and rear, and powered by the latest Bosch CX Cruise motor. Stock battery capacity is a generous 625 watts and up to 1125 watts with optional add-on battery. The frame is now carbon, features internal cable routing, integrated fork crown bumpers, and a super clean battery cover. Geometry has been given the standard longer, lower, slacker treatment but doesn’t take it to super-enduro levels. It’s clear that Orbea had it’s sights set on creating a well rounded all-mountain machine rather than an all-out descender. 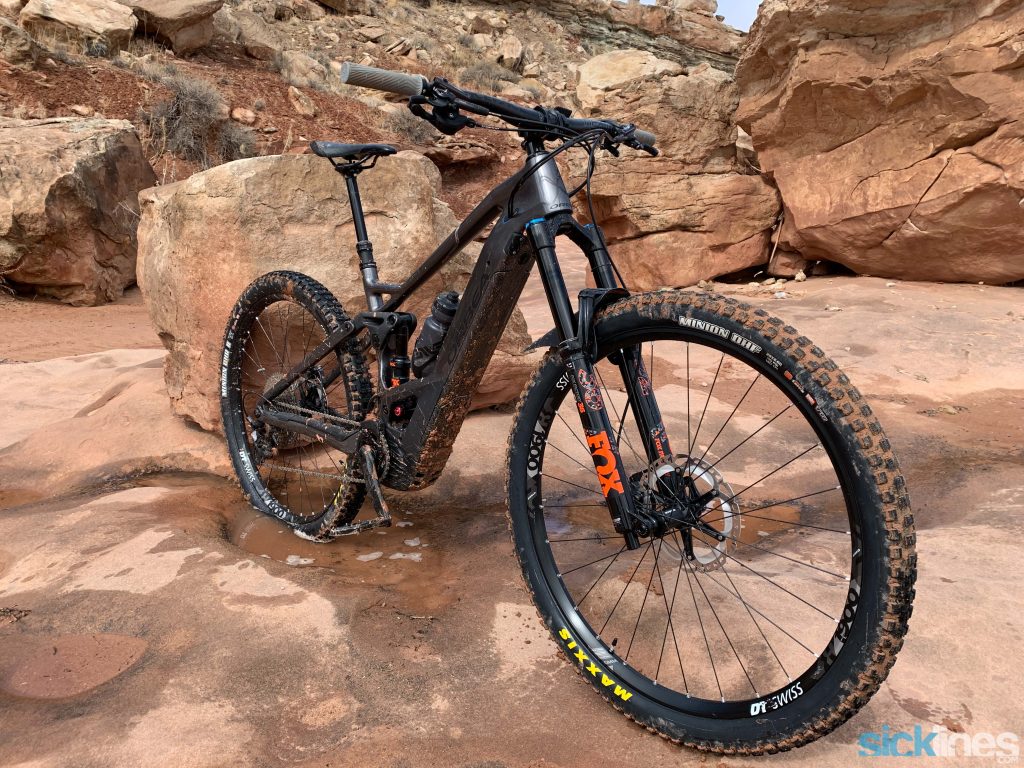 Orbea tuned the linkage to be quite progressive near the end of the stroke for improved bottom-out resistance. In theory this is a solid call to help control the momentum so easily generated. In practice on Moab’s Sovereign trail, hucks to flat resulted controlled, confident landings. My tester bike was setup with a DPX2 shock but both the Float X2 and DHX2 coil shocks are options if you want a build more focused on the downhill. With the shock oriented vertically, there’s plenty of room for either a water bottle or a second battery. 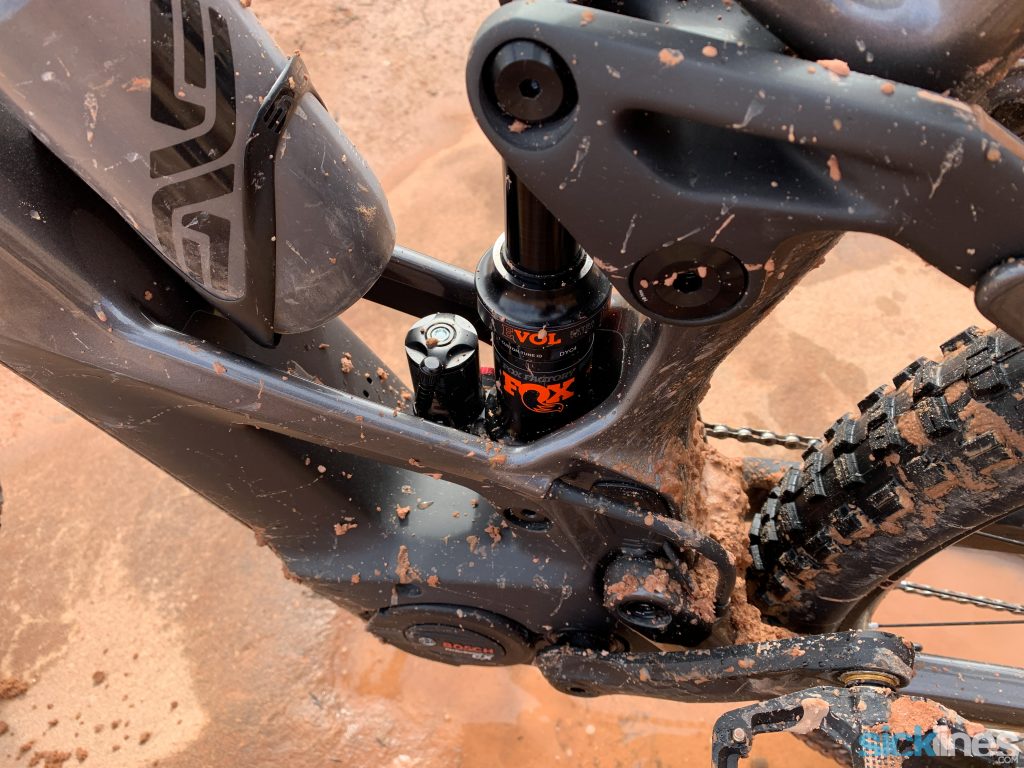 E-bike lines are starting to look cleaner all the time and the Wild-FS is right on point with it’d tidy integration of the Bosch motor. No one is going to mistake the Wild-FS for an analog bike but it’s a clean design. E-Thirteen cranks at 160 mm really helped to minimize pedal strikes, especially when spinning up and through the endless ledges and loose rock on the Sovereign trail. 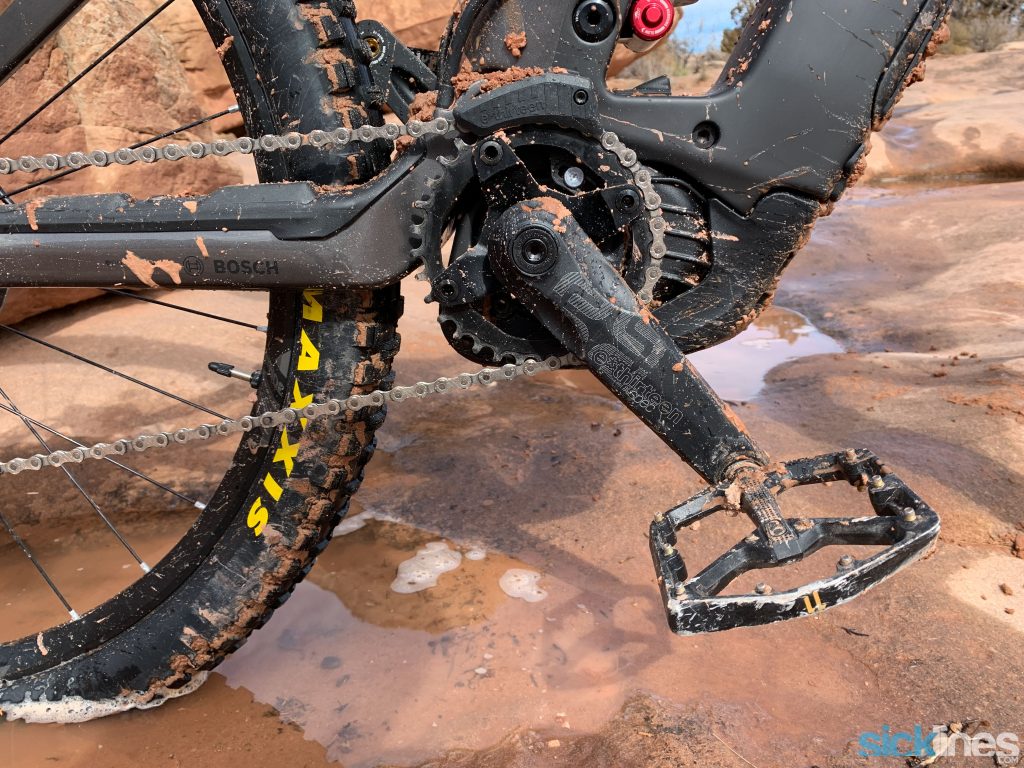 Orbea got the chainstay length right. I’ve ridden a few short chainstay e-bikes and while it does lend a bit more nimble feel, it compromises the rider’s ability to use the motor to it’s full potential to climb the steepest grades without looping out. At 455 mm and in conjunction with the 76º seat angle, rider weight is shifted forward allowing for some straight-up ridiculous climbs. My time abroad the Wild-FS was brief and solo hence the lack of action shots so you’ll just have to take my word for it. 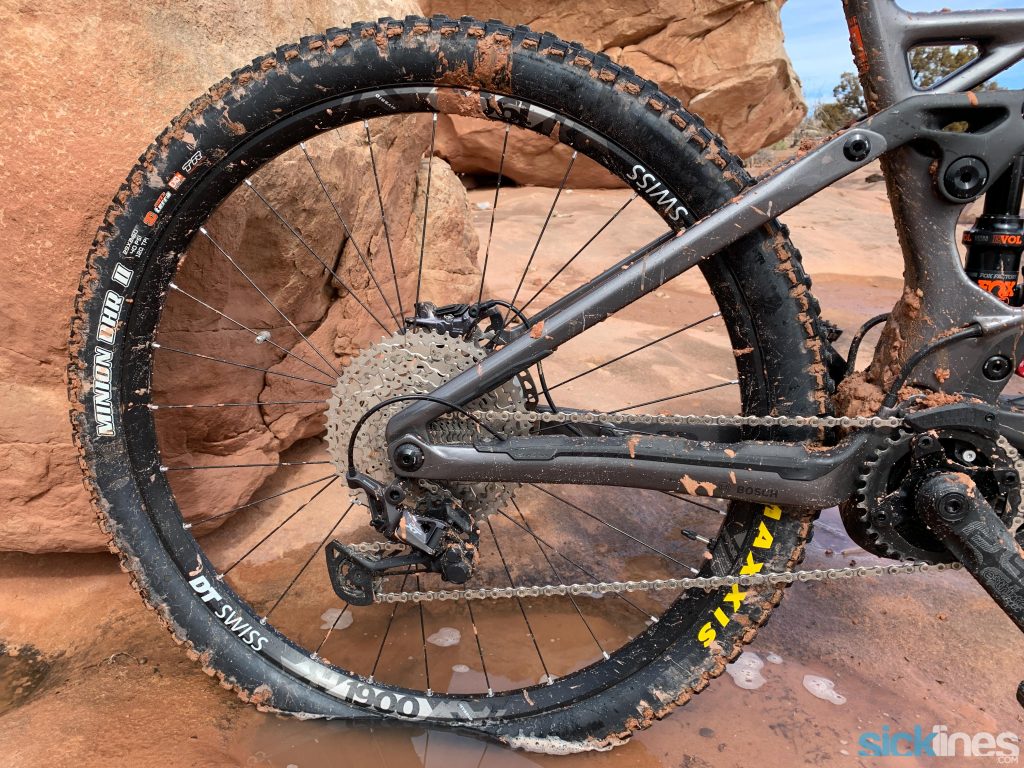 Orbea spec’s a 160 Fox Float 36 e-bike specific model on each of the Wild FS models. The M10 spec that I was loaned comes stock with the basic Grip-3 position damper while the Team and M-LTD models get the Float 36 Factory with the Grip-2 damper. The fork I rode had been customized with a Grip 2 damper upgrade in the stealthy all black Performance Elite chassis. While you can’t order one this way from the factory, you can use Orbea’s Myo customization program to upgrade an M10 spec with a Float 36 Factory edition with the Grip 2 damper. 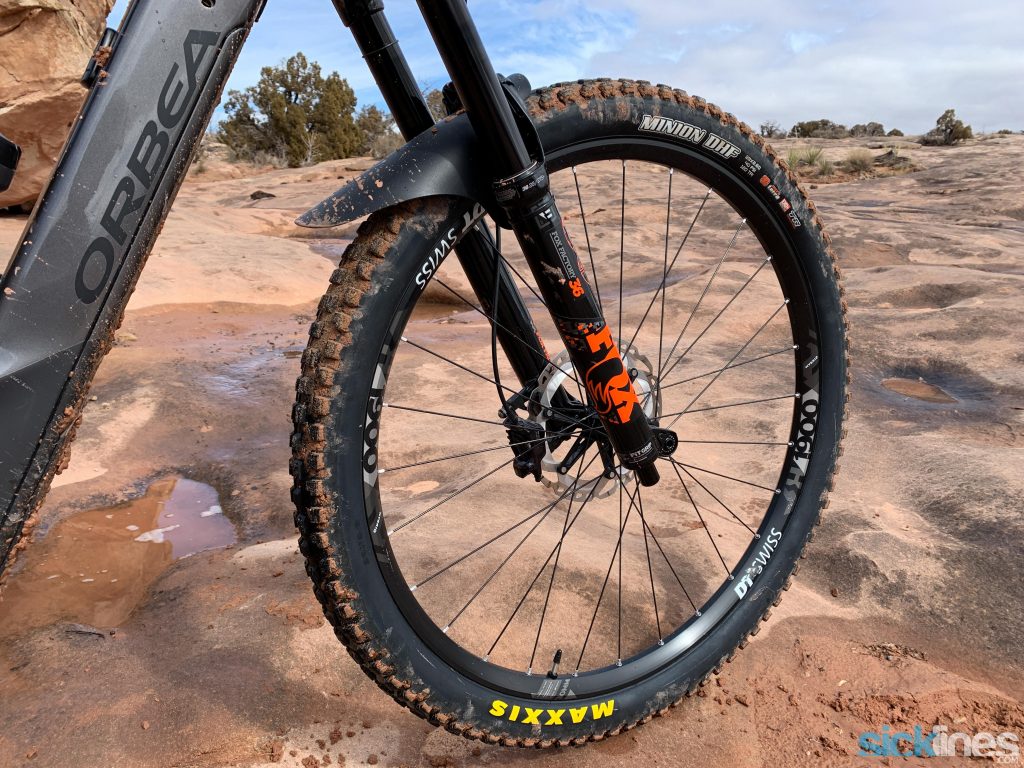 With one afternoon to spend on the Wild FS, there’s still much that I didn’t get to throughly checkout. I started with less than 100% battery power and didn’t quite take it to 0 so I don’t have an good sense of range other than to say it seems noticeably better than the 500 watt Shimano equipped bikes I’ve ridden. The Bosch Kiox display is really a nice piece of kit but I failed to snap even a shot. That said, if you smash the Kiox the motor can not be operated and you may be in for a rough pedal home. This is the first e-bike I’ve ridden with Shimano’s 12 speed drive train and I was thoroughly impressed with the expanded gear range. Shimano’s signature precise shifting under load coupled with the Bosch motor’s ultra smooth power delivery make this e-bike the best at putting power to the ground that I’ve ridden. The latest Shimano XT four pot brakes on the other hand, look the part but are unfortunately inconsistent and distracting. Orbea’s house brand OC2 dropper post was smooth no excessive play. Overall, it’s a hell of a package, especially considering I was aboard the cheapest model with an MSRP of $7299. While I can’t offer much in advice on long term durability or performance when ridden at the limit, my afternoon on the Wild FS was enough to convince me that it’s worth a real close look. Keep an eye on the site, we’ll be posting updates if we’re able to get more time on this ride. 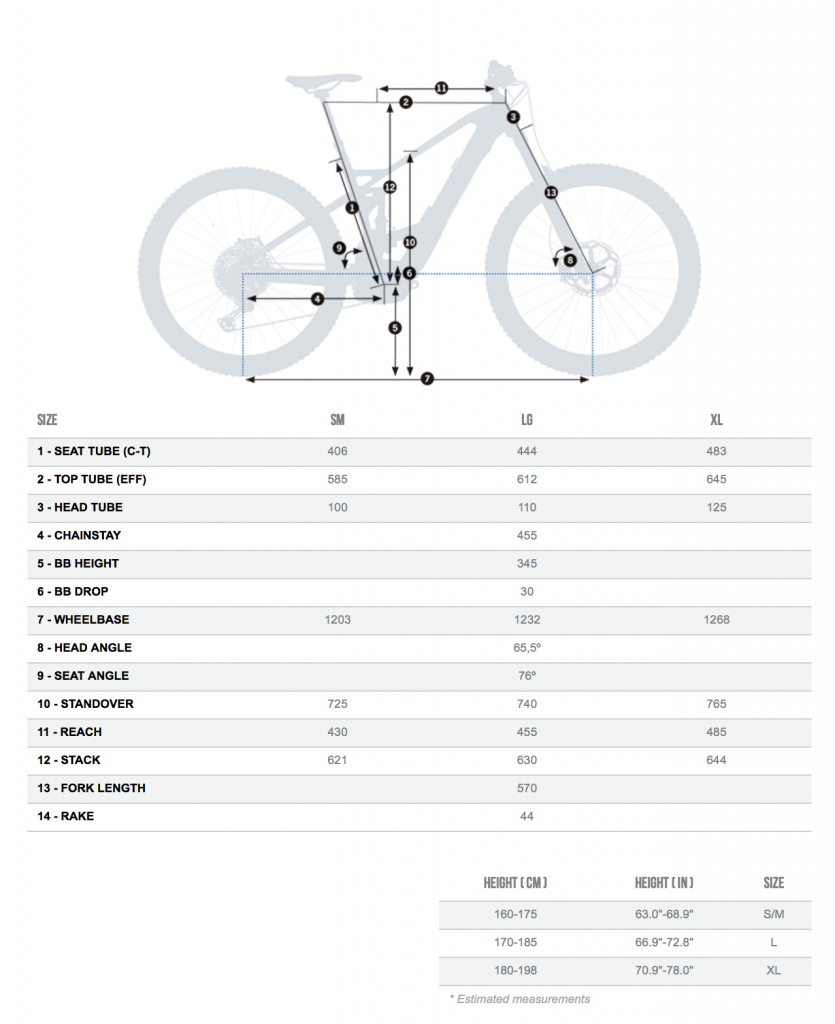 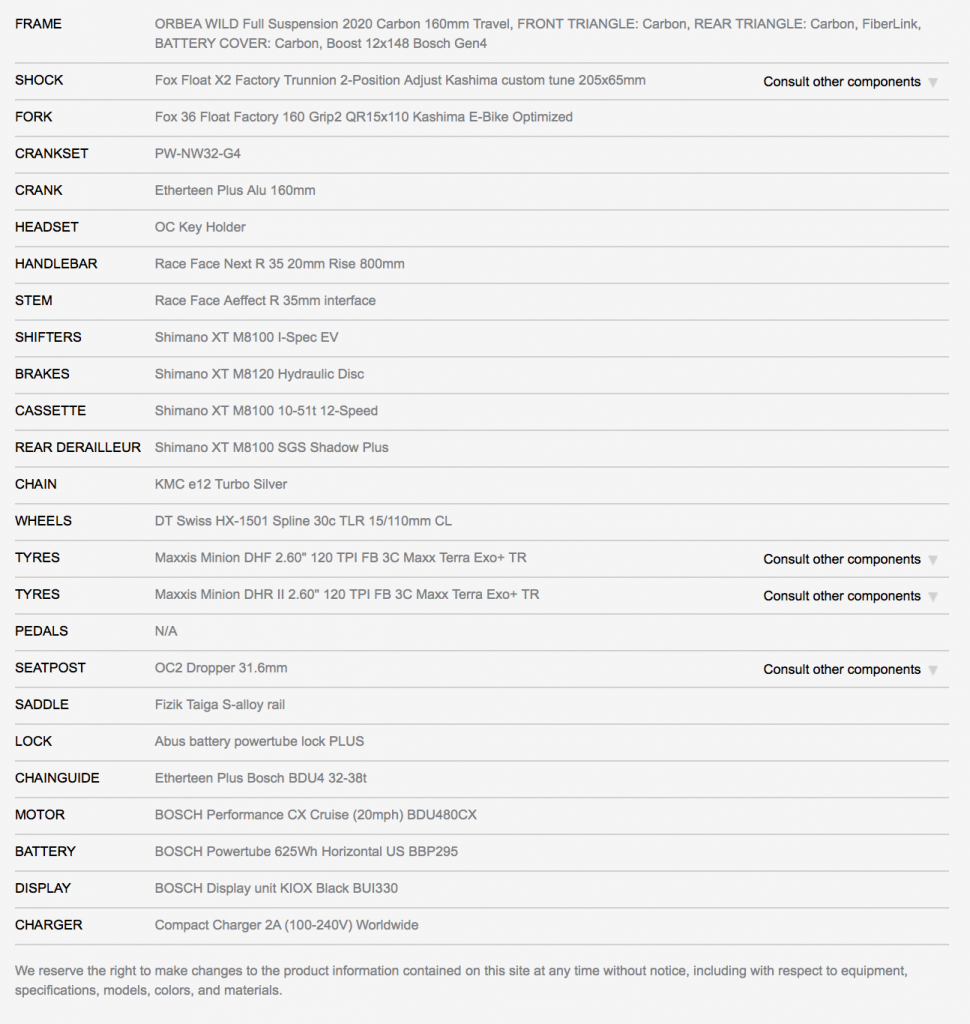