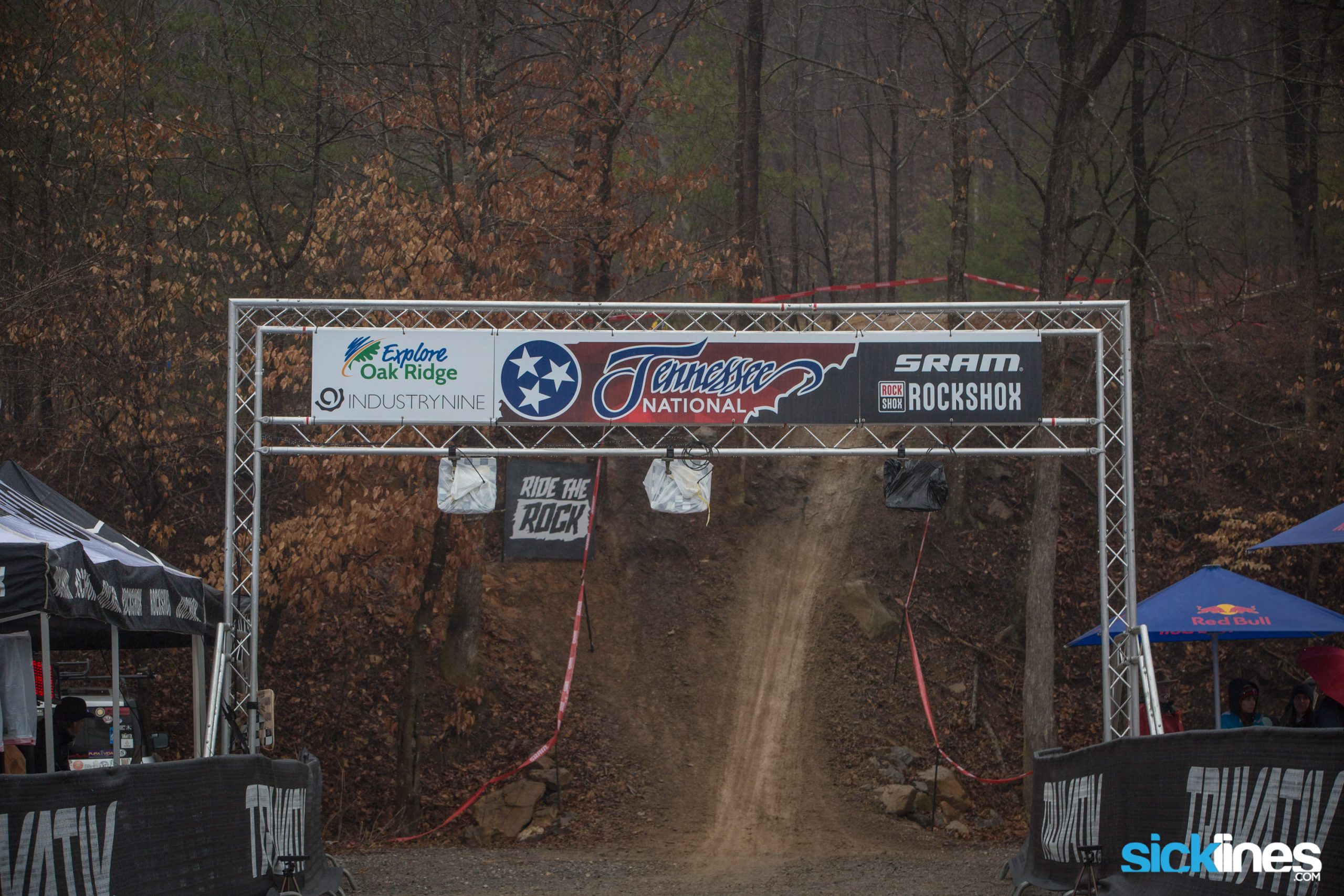 In just under a week, March 4-8th, Windrock Bike Park (Olvier Springs, TN) will host the first race of the 2020 National Downhill Series as part of their Tennessee National. We thought today it would be fitting to revisit the 2019 Windrock Pro GRT race.

We’ve been visiting Windrock for some time now and things continue to change each year. In 2012 the trails were quite a bit different and coordinating a shuttle weekend took some effort. 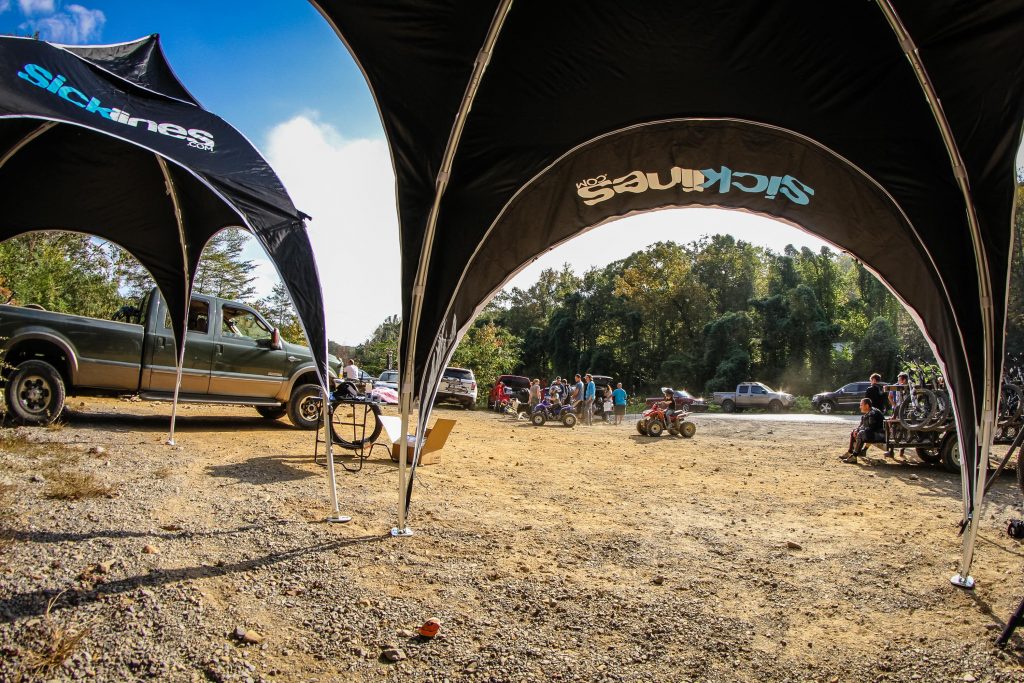 The 2019 Pro GRT at Windrock was a well attended event that has drawn big teams and brands including SRAM, The Syndicate, Trek Factory Racing, Madison Saracen, The YT Mob, Canyon, Intense Factory Racing, and Unior Devinci to name a few. The Tennessee National draws a-lot of world class talent.

The 2019 parking lot was full to say the least and we can’t recall there ever being this many people at Winrdock for a bike race.

With the race in early March every year it often is muddy and 2019 was no exception. If you’re planning on coming this year be prepared for a muddy race. 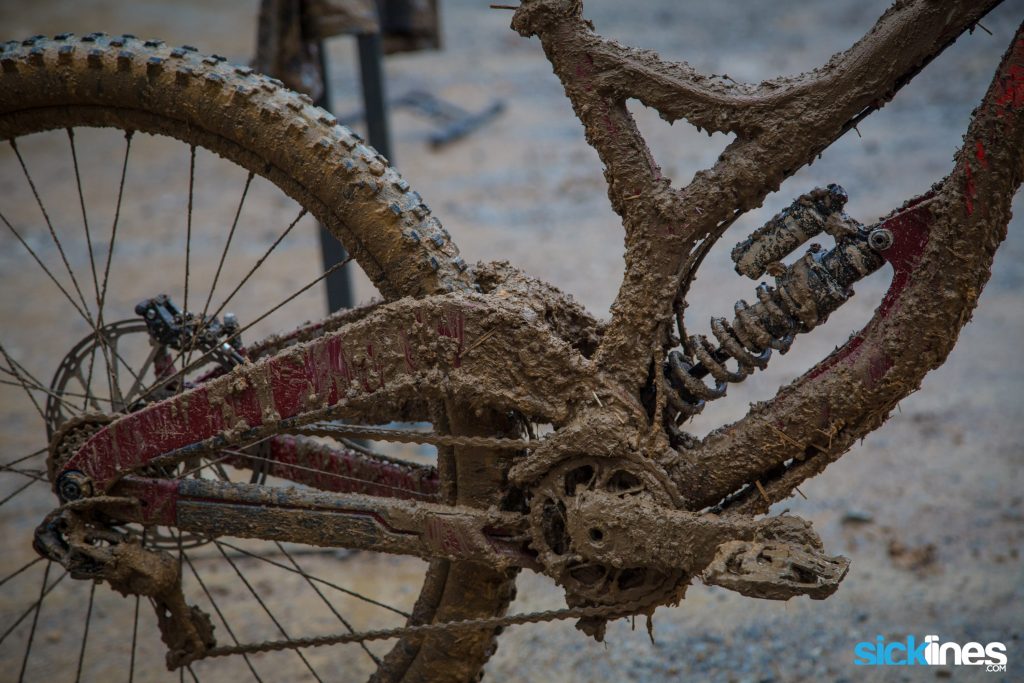 Thankfully Windrock Bike Park was prepared but the lines for the pressure washer were busy and some racers also used a creek to clean their bikes if time was tight. 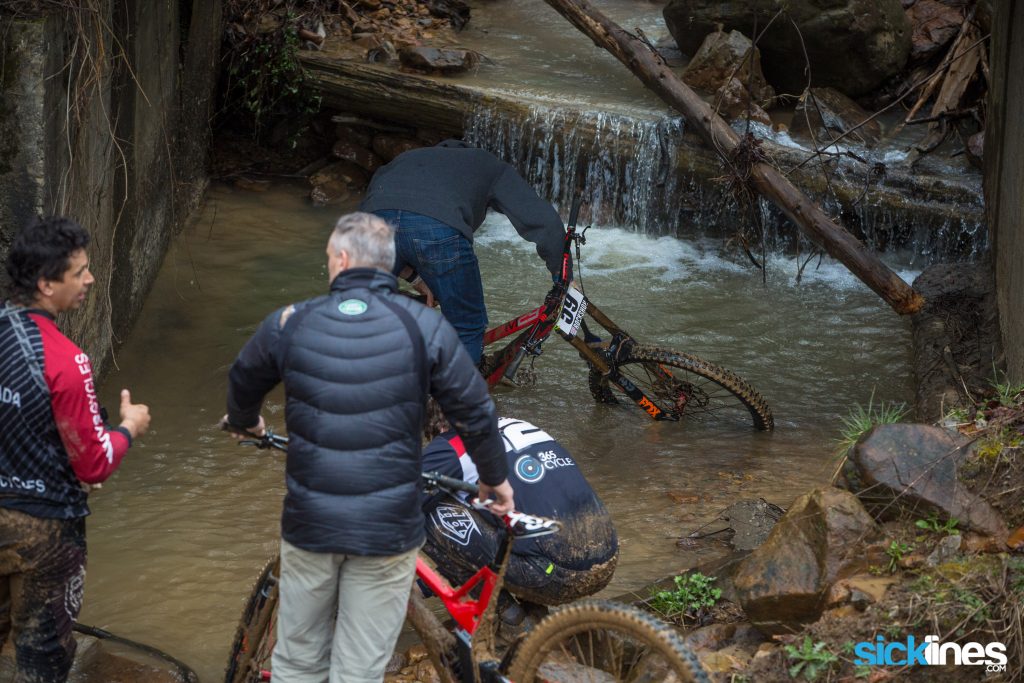 Many of the teams were excited to race in the mud to prepare for the upcoming World Cup season. SRAM held a Team test camp here before the race and did a lot of testing with their athletes. 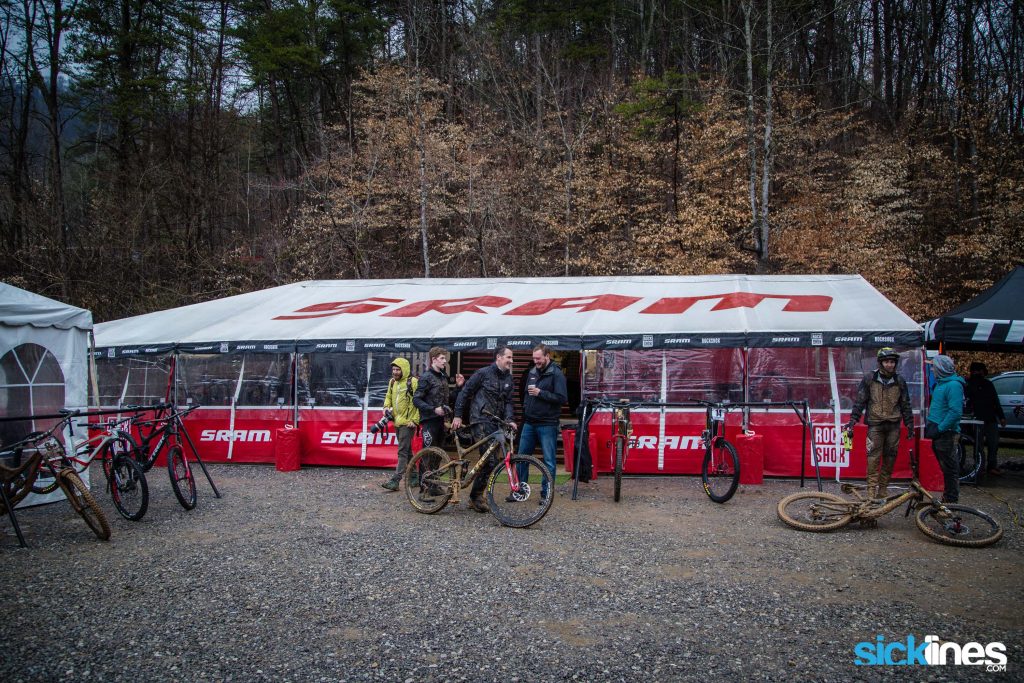 Luca Shaw (Santa Cruz Syndicate) and many other riders were quite muddy during practice and qualifying. 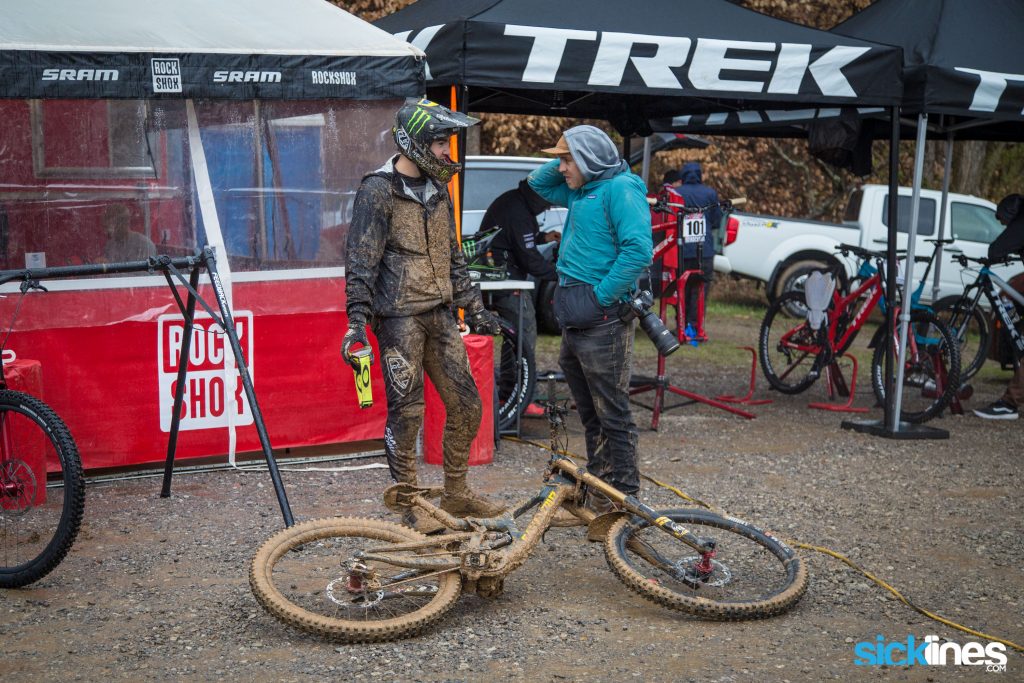 The mud made for a lot of cleaning however for the mechanics. Andrew Shandro (Trek Factory) and Doug Hatfield (Santa Cruz Syndicate) were busy cleaning gear and bikes. 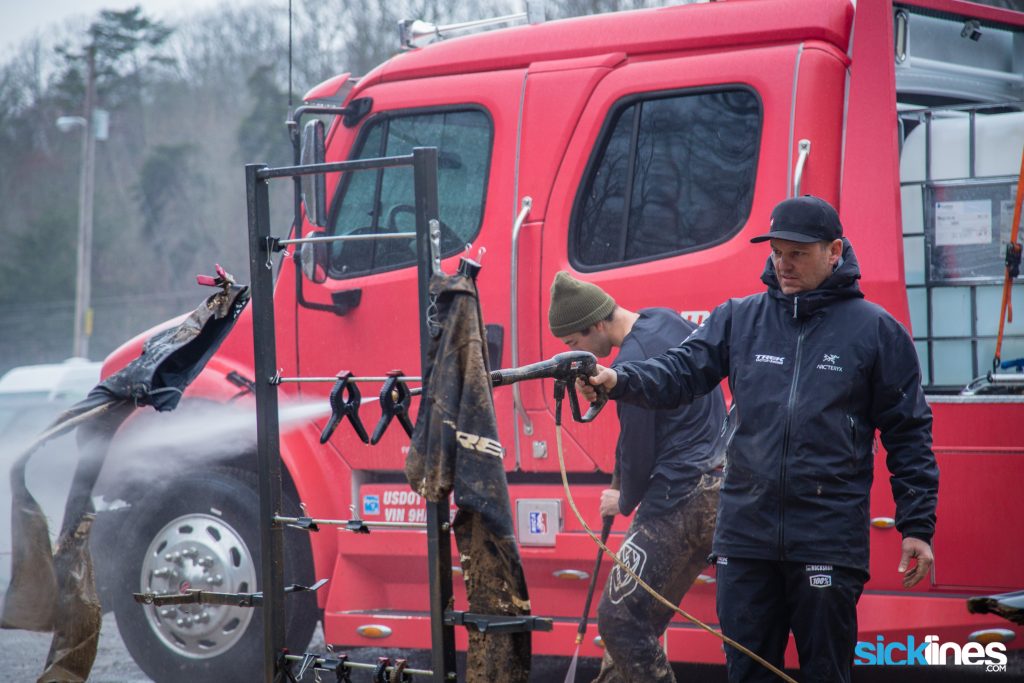 Qualifying day was Friday and everything got muddy. Racers were strategizing how to proceed since the weather forecast was up in the air. Mitch Ropelato is used to chain-less races and he managed to loose his chain in qualifying at some point as seen from the step down photo below. He still managed a good time considering. 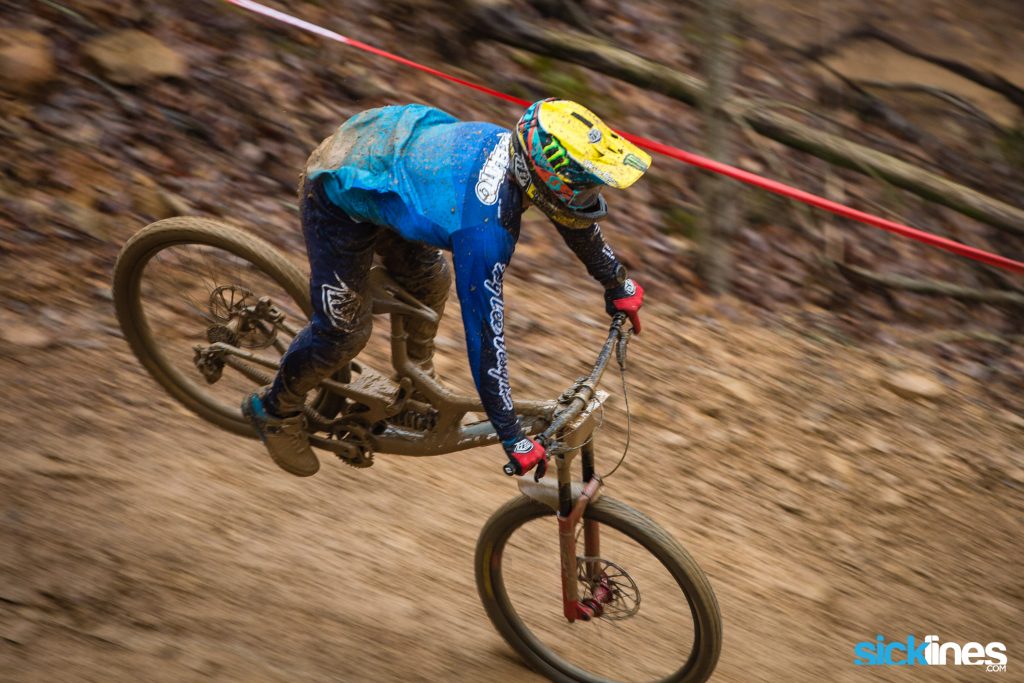 Mitch Ropelato stayed dry after his runs and qualifying. He even got a few moto practice laps in on the video games to unwind in the SRAM trailer. 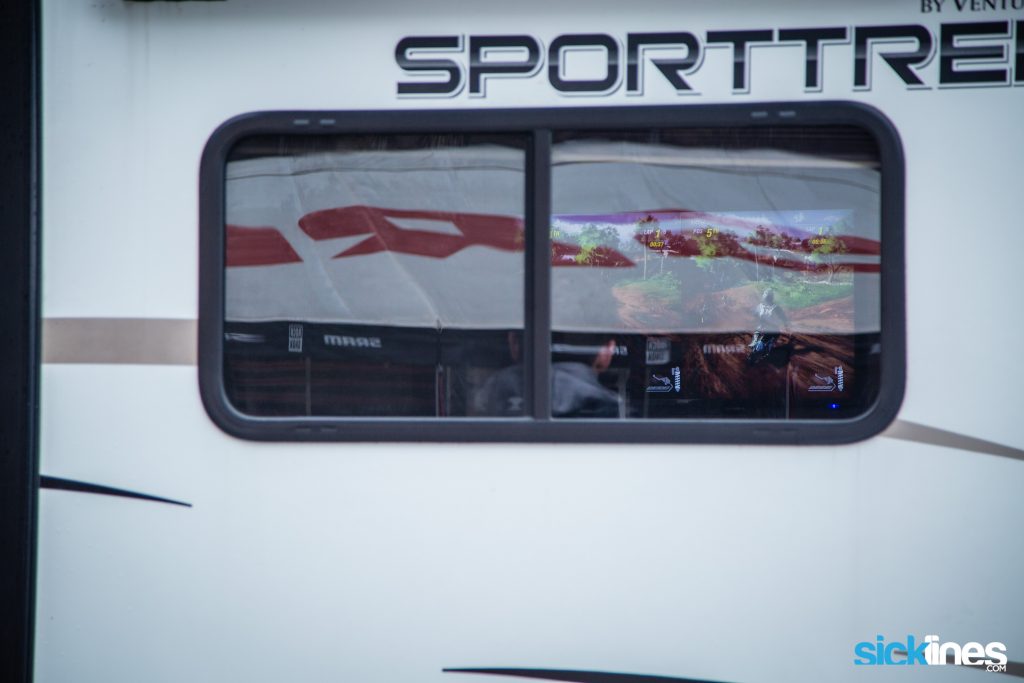 Qualifying
Elite Men qualifying had Charlie Harrison in first, Loris Vergier in second, Neko Mulally in third, Jacob Dickson in fourth, and Kiran Mackinnon in fifth. The talent level was deep at this Pro GRT. Under 18 athlete Ethan Shandro had the fastest qualifying time of the day. 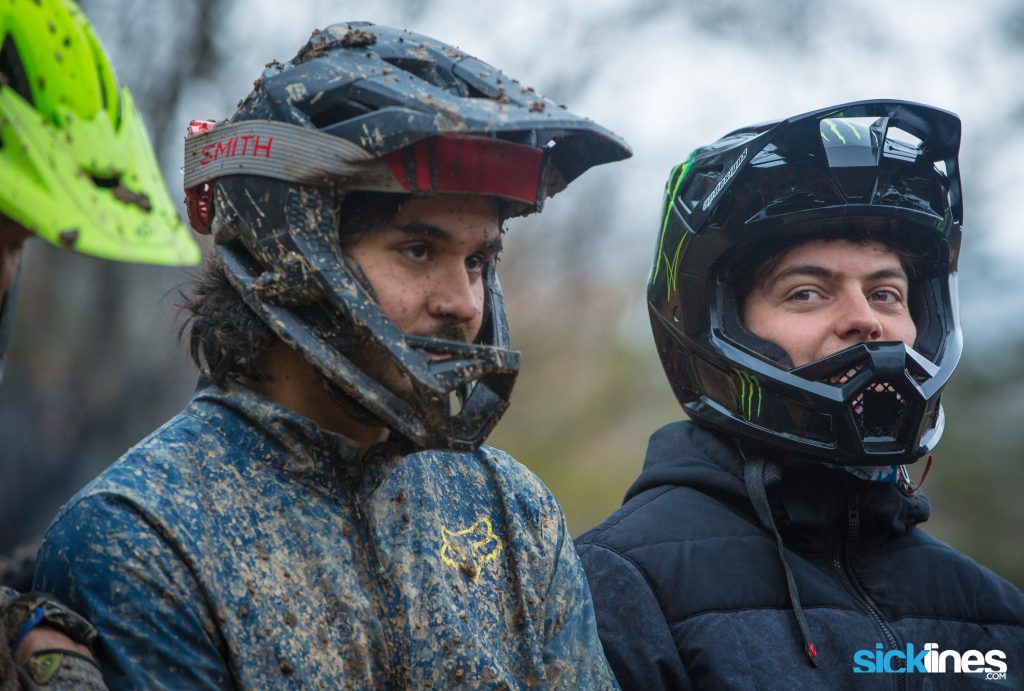 Charlie Harrison navigating his way down into 4th qualifying position. 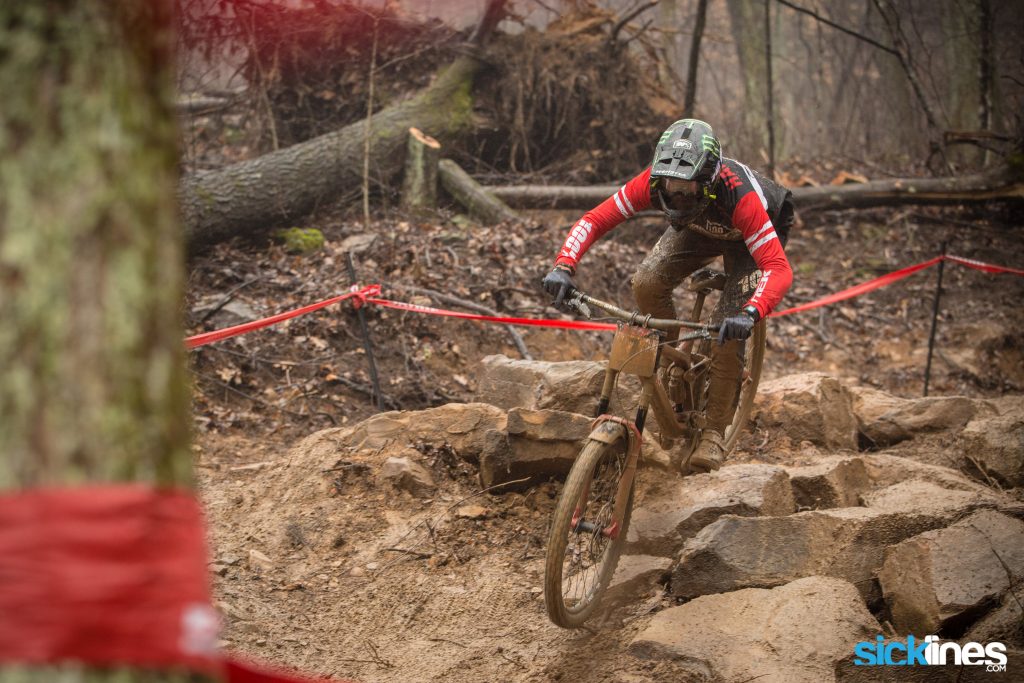 Finals
On finals day, things were still wet and muddy. Spectators came from far and wide to see the competition. 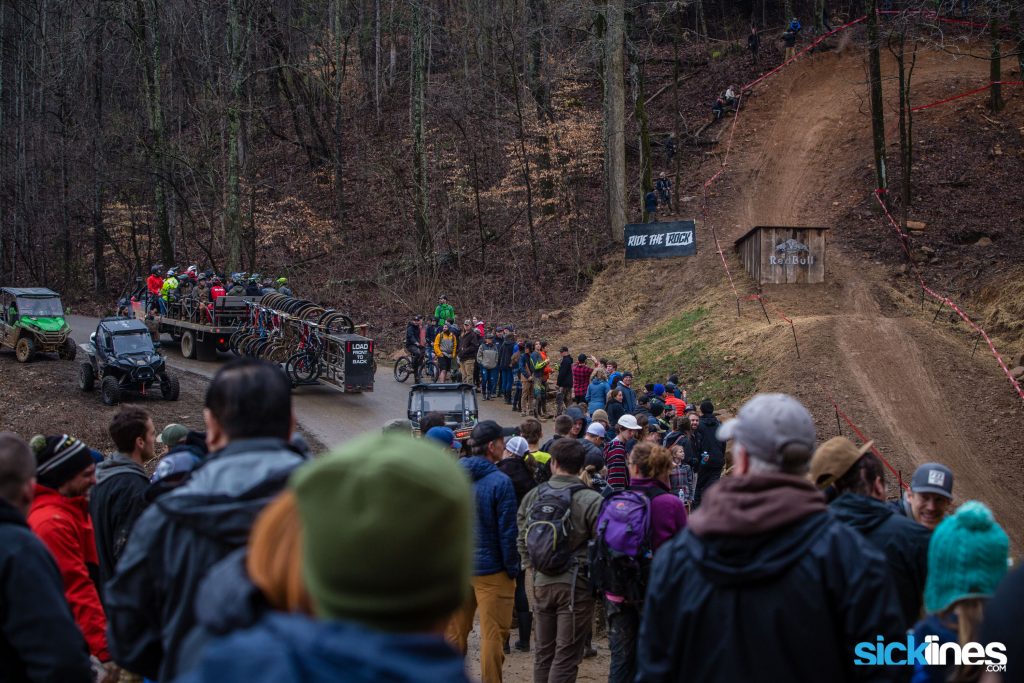 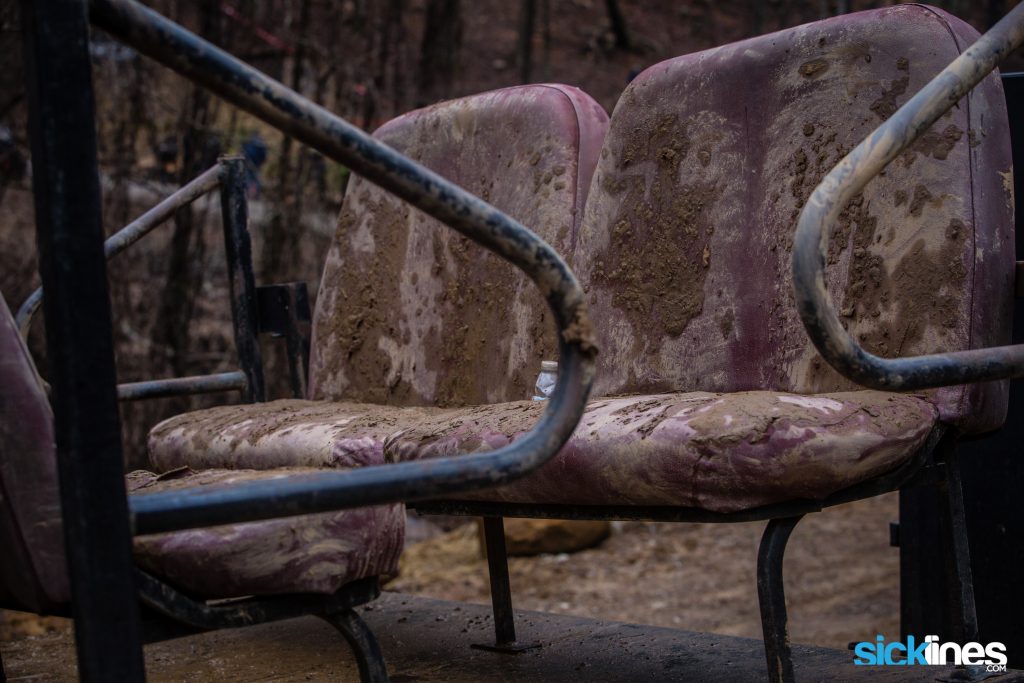 Ethan Shandro (Trek Factory Racing) is a force to reckon with and he took the junior (under 18) win decisively in his class with a 3:07.989 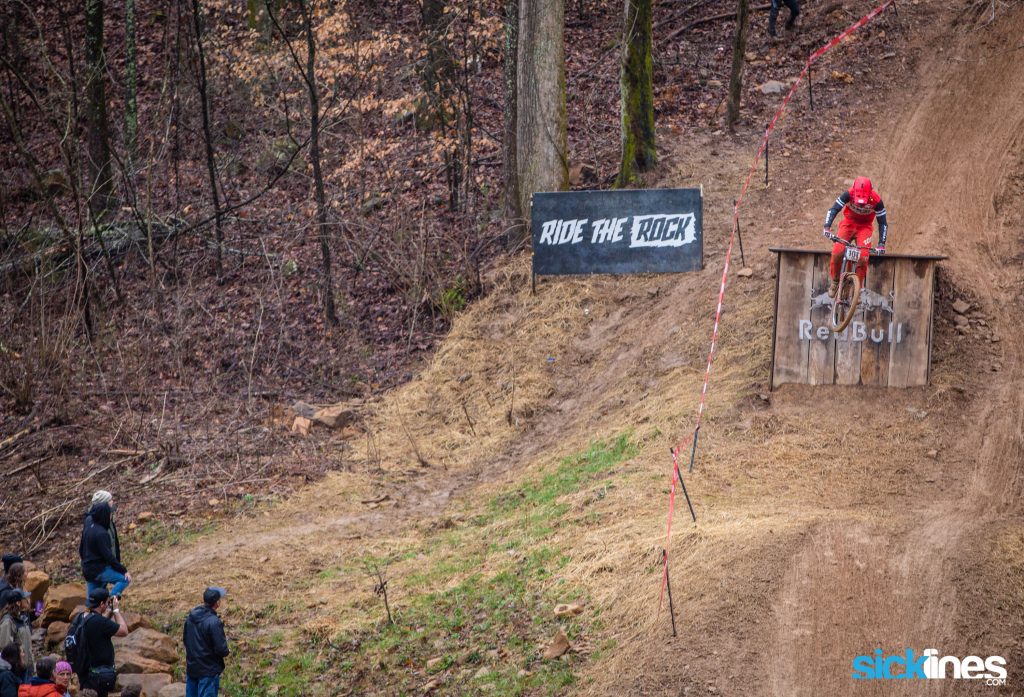 Rachel Pageau (Pivot Cycles / Juibo Eyewear) ended up taking the win for the elite women with a 4:37.413 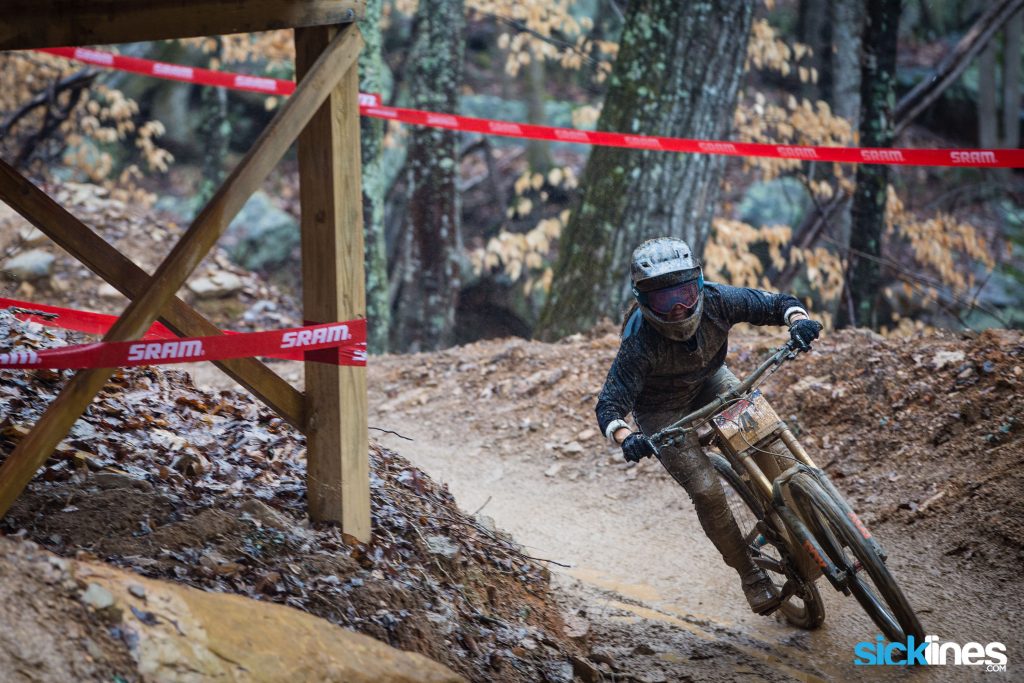 Max Morgan is no stranger to Windrock and he was doing laps all weekend looking to do well. He took the hot seat for awhile in the Elite men until Jacob Dickson came down. 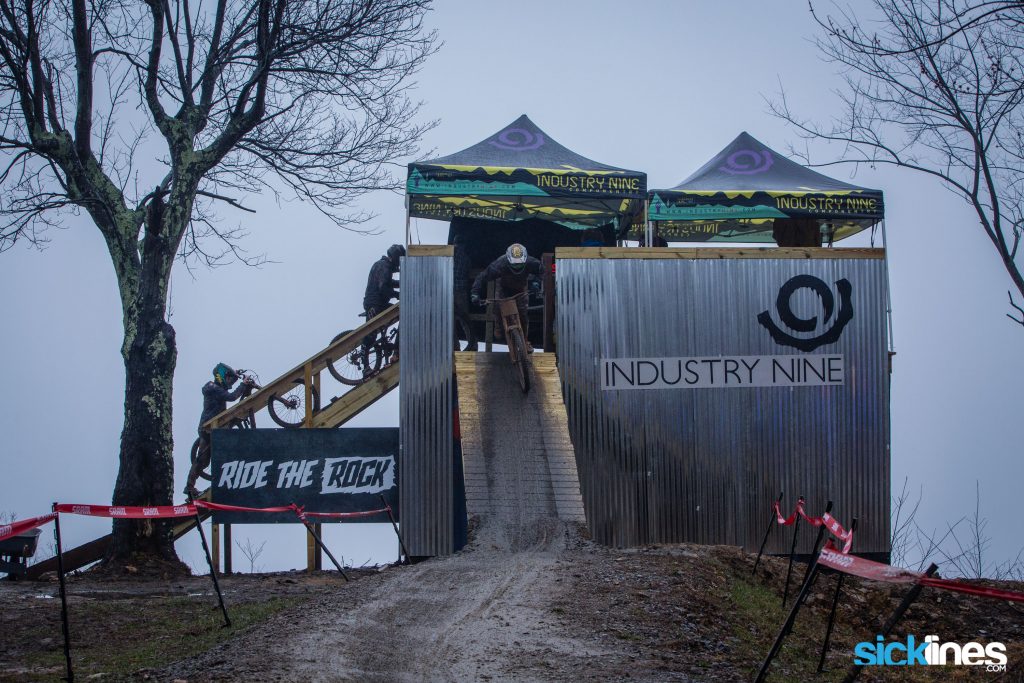 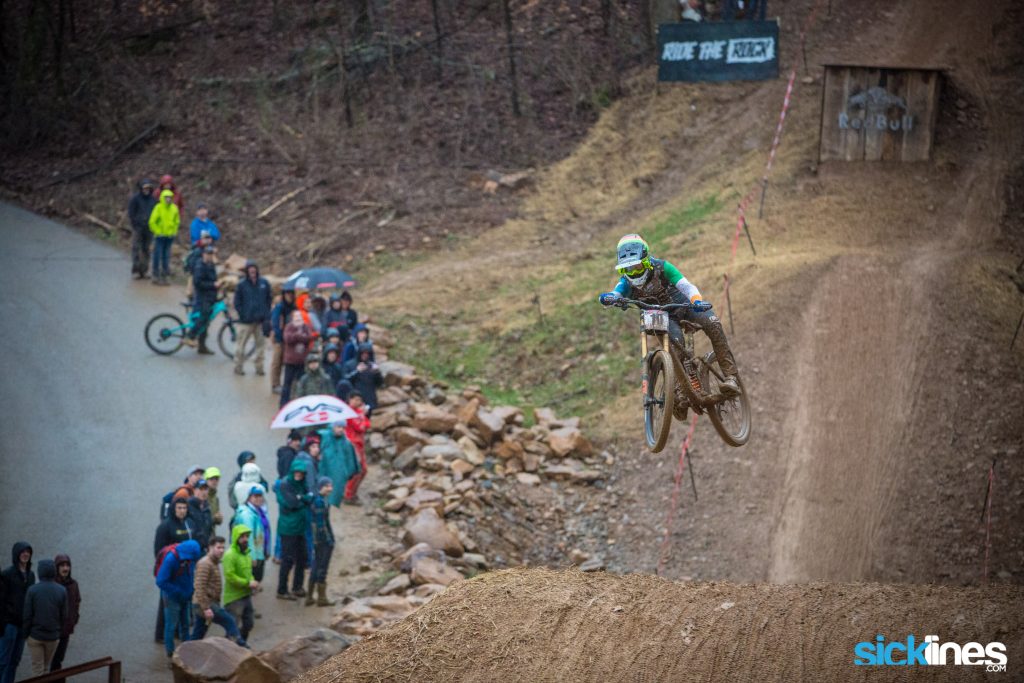 Charlie Harrison (Trek Factory Racing) slotted into second with a 3:02.174. 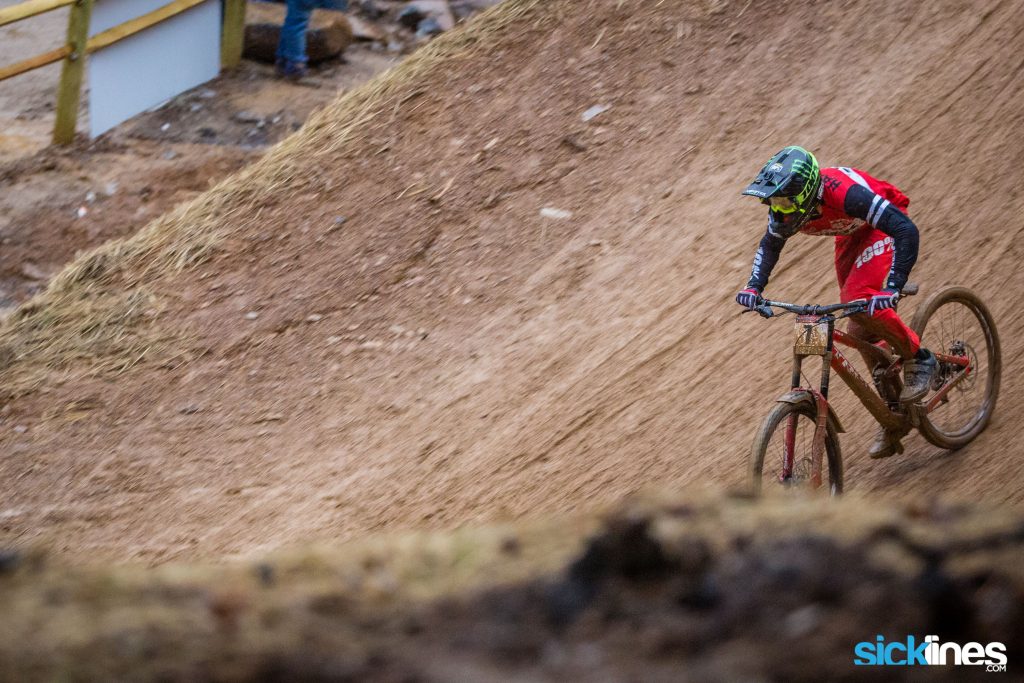 Once all the runs were calculated, the top Elite Man was Loris Vergier (Santa Cruz Syndicate) with a 3:01.568 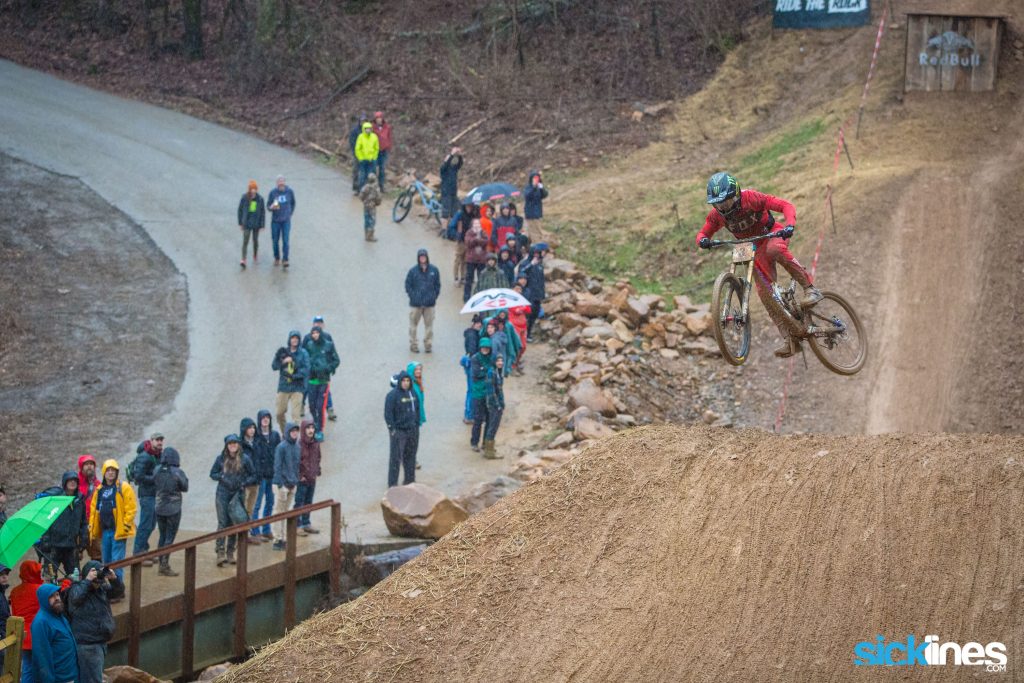 The 2020 Tennessee National takes place in a few days, March 4-8th and is part of the National Downhill Series (replacing the Pro GRT for 2020). Bring your bike for the enduro race or downhill race and see how you stack up!