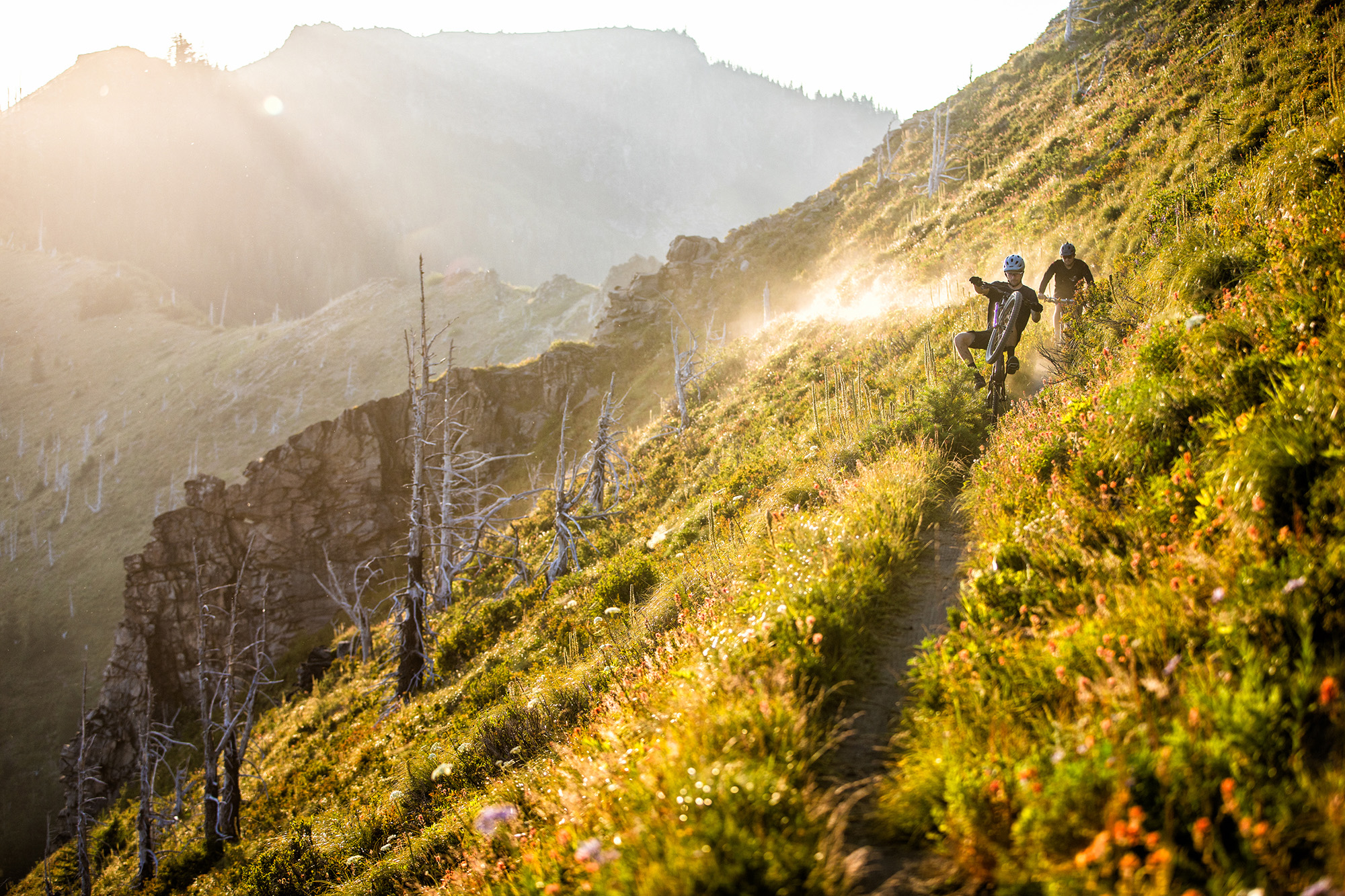 Santa Cruz Bicycles has announced, Pay Dirt, a program they’ve developed to give away $1 million dollars for trails. Get your application in today to improve your trails!

Santa Cruz Bicycles to Give Away $1 million

Santa Cruz Bicycles commits to giving away $1 million to projects that increase access to trails This is our commitment to increasing access to quality trails. We’re pledging to give $1 million over the next three years to trail development projects, local and national advocacy organizations, events, and programs geared toward creating and strengthening access to trails.

Santa Cruz wants to support activities that benefit riders and their local communities. And, we want to inspire others to do the same. PayDirt is about supporting grassroots organizations to do the silent work of advocacy to build or maintain the trails we all enjoy. Any group who has an idea or running project that increases access or improves the experience of mountain biking can apply to the PayDirt fund. Starting today.
Apply today!… www.santacruzbicycles.com/paydirt

We will consider any project that increases access for mountain bikes will be considered; whether that’s building trails, supporting local trail and MTB organizations with their advocacy efforts, trail builders or providing opportunities to get more riders on bikes more often.

Long-time supporters of good causes
SCB has long supported people and groups that provide greater trail access. We’ve partnered with groups like Sierra Buttes Trail Stewardship since their inception on the quest to create sustainable recreation-based communities in California’s Lost Sierras region through trail stewardship, job creation and world-class events. We started by supplying Greg Williams with bikes for his rental/shuttle business back in 1994 and we’ve supported the Downieville Classic since the beginning. We’ve been supplying SBTS with bikes for their annual $5 Per Foot campaign, which to this day has raised over $400,000 thanks to riders everywhere. We continue to offer our financial support to SBTS each year and want to continue that relationship long into the future because they’ve got a lot of big plans for that area…

DOWNIEVILLE, CA – during a photoshoot with Nathan Riddle and Campbell Steers for the new Santa Cruz Tallboy 4 and Juliana Bicycles Joplin 4 on the Gold Rim Connector Trail near the Sierra Buttes. Photo by Gary Perkin

Locally, in Santa Cruz, we are big supporters of Mountain Bikers Of Santa Cruz (MBoSC). Despite the origin stories from Marin County, mountain bike trail access in California does not come easy. Despite being the home to a lot of mountain bike companies and a lot of mountain bikers the number of legal and non-threatened trails isn’t that great. Of the 220 miles of official trail in the county, less than 40 are open to mountain bikes. MBoSC works to support, preserve, and expand
trail access and responsible mountain biking in Santa Cruz County. Every employee of Santa Cruz Bicycles is a member of MBoSC, we attempt to encourage as many of our staff to go out and dig alongside MBoSC, we’ve partnered on several fundraising programs in the past and we’re increasing our commitment to them for the future through event partnership of the Surf City Cyclocross series (the USA’s longest running CX race series) and the Old Cabin Classic in Wilder Ranch State Park. Both events are held a stone’s throw away from our bike factory in Santa Cruz.

The San Vicente Redwoods trails project is something that’s been brewing for a while. When a large area of wild space on the coast just north of town became potentially accessible by the public Santa Cruz Bicycles led a local industry syndicate to fundraise for the property’s recreational trail plan. This collaboration meant we were able to raise the funds necessary to get through the project planning stage (which was executed by MBoSC and SBTS), and we want to see it happen so we threw in an additional $500,000 in the campaign to raise the $7m the project will cost (it’s not just trails, but also infrastructure, maintenance and wildlife conservancy). Any day now, after a long bureaucratic process, the first shovels will start turning over dirt to create 38-miles of new multi-use trails – something quite rare in Northern California.

Creative ways of raising funds and awareness
We’ve helped raise a lot of cash and awareness for projects close to our heart. For example, 2017 was one of the worst wildfire seasons on record for California. Homes were lost, lives changed and singletrack went up in flames. “We talked to our shops, reps and customers in the areas affected by the fires and above all they expressed a real desire for a return to normalcy,” said Santa Cruz CEO Joe Graney. “We all know how a good bike ride makes you feel, and we want to
help people get back to that.” In order to help with trail reconstruction efforts in Santa Rosa and Santa Barbara, we partnered with other California-based bike brands to make two custom bikes for raffling off. The total raised was $128,249.

Long-time friend of Santa Cruz, mountain bike guide and MS sufferer, Andy McKenna, has been doing the good work to raise awareness of how people with MS can still lead happy, healthy lives. He does this through his organization, STOKED ON MS. To help keep the fundraising momentum going we produced a one-of-a-kind, unique, custom-painted, fully-specced Santa Cruz Bicycles Bronson bike. Each raffle ticket cost just £5, and ultimately raised?28,319. There was also the time when Oregon introduced a new tax on bicycles (specifically mountain bikes), which we thought was kinda wack. “The whole thing seemed like a bad deal for Oregon cyclists in general and mountain bikers in particular,” said Joe Graney. “It doesn’t look like any of the money collected from the sale of mountain bikes will actually benefit mountain bikers, so we thought we’d try and do something to ease the pain of our northern neighbors.” Which is why we launched the “The Oregon Trail Tax” where we matched the $15 per bike excise tax customers pay on every new Santa Cruz or Juliana bike sold in Oregon with an equal donation to three Oregonian trail building organizations – the Northwest Trail Alliance (NWTA), the Central Oregon Trail Alliance (COTA), and Team Dirt.

Advocacy in Oregon is nothing new for Santa Cruz; as part of the company’s sponsorship of the Trans-Cascadia enduro race (which goes towards the Ten For Trails program, event funding and bike raffle fundraising), our employee based Factory Racing Team has logged more than 500 hours of trail work in the state over the last two years on trails near the towns of Oakridge and Ashland.

Generally all the events we support have a significant trail stewardship and fundraising element to them: this includes Downieville Classic, NZ Enduro, Trans Cascadia, Ard Rock Enduro, Old Cabin Classic and Trans-Provence.

Mobilizing human-power
But our work doesn’t stop at writing checks. Whenever we can we’re side-by-side with these organizations at meetings, and mobilizing our employees to write letters of support en masse and turning up at trail days. In 2018 1,411 employee hours were provided to voluntary advocacy efforts – sometimes that was us paying for our employees hours to skip work and turn up to dig days, other times it’s our employees going above and beyond to make tool noises in their own time (which we don’t count in our total). But we know that sometimes it’s cold hard cash that really helps these grassroots organizations to do the silent work of advocacy so that others can make tool noises that build new or maintain existing trail networks.

In 2018 we donated approximately $175,000 of cold hard cash, and we helped raise around $225,000 to support new trails and maintenance. But starting in November 2019, we’re going bigger. We’re committing $1 million dollars in cash over the next three years. That’s our solid commitment. How that money is best used is what we need help from the community to determine.

An even bigger commitment
We want to share our support further than the core groups and places we already support. We want to make sure they’re rad projects put together by trail advocacy pros that will lead to better access to mountain biking. It doesn’t even have to be for building or maintaining trails, it could be about getting some people on bikes or giving them a trail experience. Who knows, we’re open to ideas.

We recognize that every mountain bike rider (many Santa Cruz Bicycles employees identify as riders above all) has a duty to put into the pot because at the moment it’s a lot of volunteers and committed professionals doing all the hard work so riders can just enjoy their riding. We don’t believe in No Dig, No Ride, not exactly, but we do think if we don’t contribute in some ways then what’s our worth to the world? This is why we’re supporting the silent work and tool noises that provide us all with great mountain bike experiences. More information about PayDirt and how to apply can be found: www.santacruzbicycles.com/paydirt