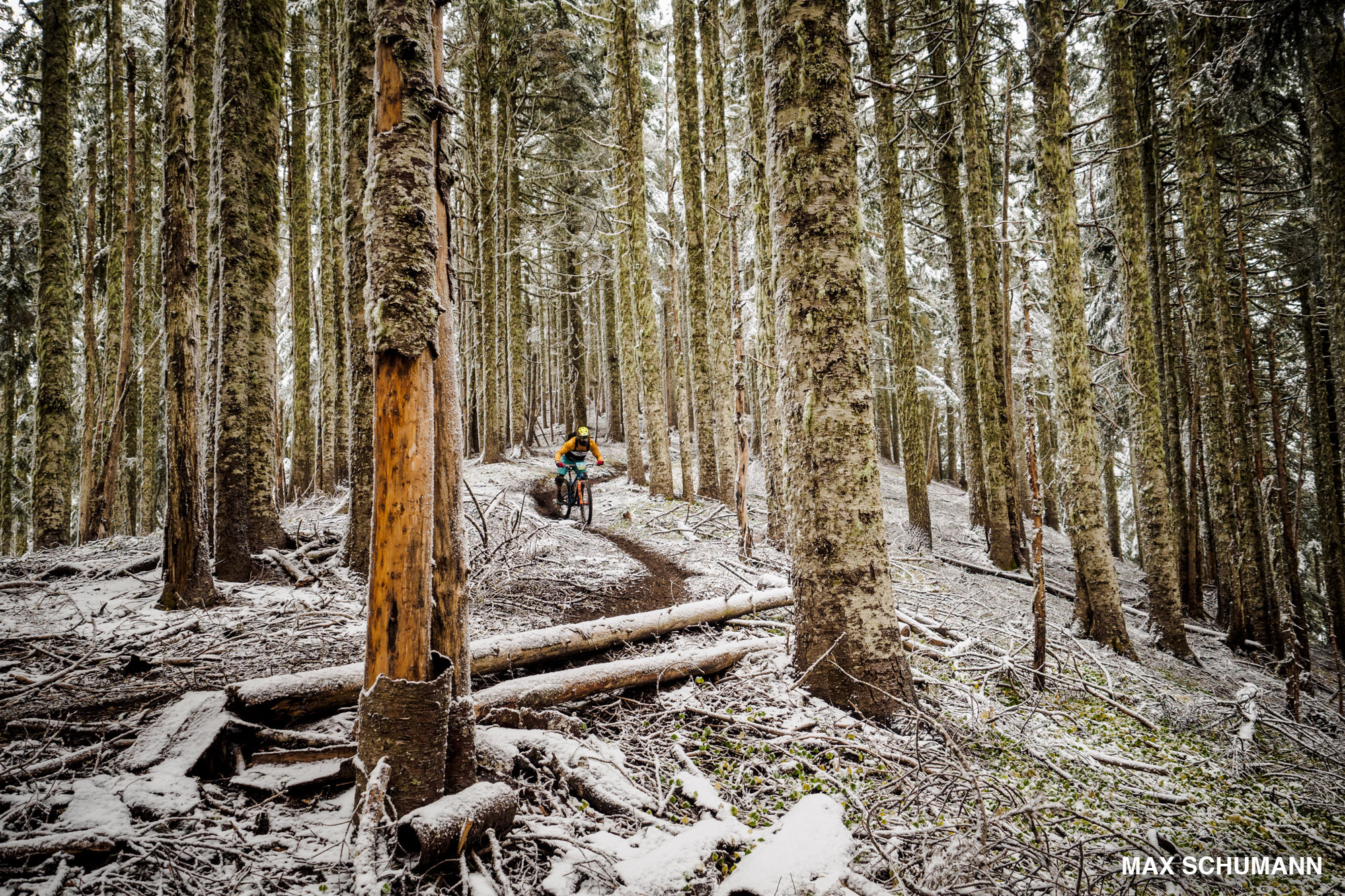 From September 25-30th the Trans-Cascadia was held, and what a race it was. The four day blind race took place through primitive PNW terrain including a snowy stage. You can check out what happened during the race as they traversed across some epic terrain in the Washington state Gifford Pinchot National Forest.

This truly remote area of Washington offers natural and diverse trails that are steep and challenging. The high alpine riding will give racers descents of 2,000-3,000 feet at a time. Within the blast zone of Mount St. Helens, in addition to the stunning ridgeline views and massive descents, the riding here has another unique property. “[The pumice] layer is like Swiss cheese marbles that float,” says Ben. “Ultimately it’s just a really fun thing to ride because you’ve got traction but you don’t have traction. I mean, the whole bike is moving, so it’s pretty playful and a little disconcerting at first. But once they get used to it and know how to run it, I think folks will be surprised to see how well they’ll do in those sections.”
-Ben McCormack

The last stage of Day 1 was a huge descent with a flat-but-downward-trending section in the middle and a couple of creek crossings. The stage ended on the far side of one of the deeper crossing and racers had been advised by Nick to “either go fast or walk.”

“Dark Meadow, new for this year and an incredible piece of trail with three different sections” describes racer Lars Sternberg. “Fun flowy, perfect dirt with full moto turns up top and then a creek crossing section and then super rocky and toothy down towards the bottom. Pretty mind-blowing.” There was a steady chorus of cheers as racers exited the bottom of the dark forested section. A mellow transfer out with a couple of rolling climbs brought racers back to the vans where a fire was roaring, and beverages were being served.

World Cup XC racer, Kaysee Armstrong, felt a little out of her element in the morning when she realized in the shuttled that the tags were still on her knee pads but that didn’t stop her from having an incredible day. “What got me into mountain biking is not racing, it’s adventures with friends,” she said. “Being dragged into the woods with a bunch of guys telling me ‘you can do this!’ It felt a lot like that today, the hike-a-bikes were tough but worth it. Getting up there and those beautiful views, we basically got to go on a big adventure tour and go to places that an XC race never gets to go to. And everyone is drinking beers and hanging out, talking, you just don’t do that anymore in the races that I go to. It’s nice to come here with a bunch of people, make friends, and enjoy it.”

“Today is the perfect example of Trans-Cascadia, and the people surrounding it,” says Lars Sternberg. “The vibe was awesome, nobody was bummed, and I think that’s one of the coolest things about this event. It really attracts the type of people who are able to adapt and deal with adversity.”

Back at camp racers were treated to a photo slideshow and videos from the race, champagne showers from the podiums, and truly heartfelt gratitude and recognition that spread from the organizers to the racers and volunteers and back in rounds of cheers and clapping.

Morgan Gerhart and Lauren Jacobson won for the most time on course and were awarded sleeping bags and full riding kits from Patagonia.

New this year as the Spirit Award which went to Jameson Florence who not only has raced all five years and attended all three work parties this year but also was a constant source of positivity and smiles on course. “It’s unreal,” says Jameson about winning the award. “I couldn’t be more pumped to be part of this thing out in the woods with these guys, I just come out here and play and it’s super fun.”

Locals, Remy Aucoin and Sarah Schmidt were recognized for their massive contribution of time and knowledge to help make Trans-Cascadia in the Gifford Pinchot National Forest possible. “Alex and I got to this new area and we called up these locals and [Remy and Sarah] met us at the trailhead,” says Nick Gibson. “We spent our first day in the woods cutting out this crazy jammed up system full of logs and clearing out this sweet descent. They’ve provided us with guidance on what trails to use and even on the Wednesday when racers arrived, Remi was up on the ridgeline brushing our trails. They have been amazing, and we couldn’t have done this without them.” As a thank-you, Remy and Sarah were given workwear from Patagonia.

When the speeches and awards came to an end the stoke carried on around the fire. “Trans-Cascadia was 100 times better than what I was expecting,” says Christina Chapetta. “It was amazing – and it’s still going. Anything can happen!”