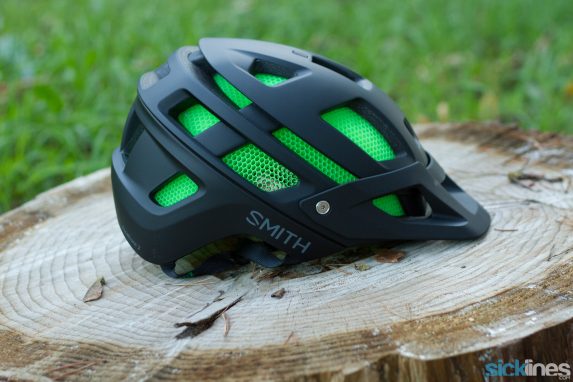 Smith sent over their latest generation of the Forefront helmet for us to take a look at. I’ve long been a fan of the original Forefront for it’s innovative features and excellent protection. Over the past 6 months I’ve spent quite a bit of time in the Forefront 2 to see what’s new. Smith has managed to update the helmet but maintain the signature look. So much so that at first glance, it’s hard to tell the new helmet from the original. Look a little closer and there are quite a few tweaks that help the new one stand apart.

The view from the top has actually changed quite a bit. The signature Koroyd honeycomb (bright green) is still present and stands out even more thanks to 20 vents in the new model. The Forefront 2 also features a couple vents right on top with no Koroyd to hinder air flow where the original model had a continuous Koroyd layer covering all of the vents. I found the first gen Forefront to be a bit on the warm side but the new helmet is about as well ventilated as any full protection half bucket that I’ve tried.

From the inside, we have a clearer view of the Koroyd layer. For those not familiar, Koroyd is claimed to provide something of a crumple zone as the individual cells collapse on impact. Last year, I found myself just a hair out of control on a steep, wet line and wound up ejecting head-first into a very pointy rock. It was in that moment that I came to understand just how well Koroyd protects as the force was absorbed and my head was saved. It was a down right scary situation. My purely unscientific opinion is that a lesser helmet would have failed and the Koroyd layer saved my bacon.

While we’re talking protection, it’s worth noting the photo above is of the model we tested which is the non-MIPS version of the helmet. In case you’ve ever been curious on the differences, I managed to borrow the same helmet equipped with MIPS for a visual comparison. For the most part, the MIPS version adds to the base helmet what is essentially a plastic grid which enables the helmet to rotate independently of the rider’s head in a crash. MIPS adds $30 to the Forefront’s base price of $200 and seems like a no-brainer with all that we know about TBI’s these days.

If you like to nerd out with lights and batteries strapped to your lid, you’re in luck. The Forefront features an optional accessory mount that sells for $15. The mount can accommodate a POV camera and many popular lights. I found that my Gemini 1500 light and its battery pack mounted to my helmet with ease and kept me from needing to run a cord down to my fanny pack.

Yeah, those are some big, bold glasses. The Wildcats are obviously a full coverage face shield. They are pretty much goggles with sunglass ear pieces with the notable exception that they actually ventilate really well. Anything but a full DH run in goggles and I wind up feeling like my face is in sauna. But the PNW mud can be relentless this time of year and I like some protection. The Wildcats offer the most complete coverage of any glasses I’ve tried and do an awesome job of keeping the mud out my eyes. Naturally, that means they’re pretty big and I’d say medium to large faces are going to be the best fit.

Like all Smith glasses (and many non-Smith glasses), the Wildcats stow under the flip-up visor allowing better ventilation for that long and steamy climb. Smith is also awesome enough to go ahead and include a clear lens with each pair of glasses which is the call for most rides in the PNW. My only concern with the Wildcats is that if you throw them in your pack, the folded arms rest directly against the lens and quickly scratch them up. It’s not a deal breaker, but something to be aware of. Now I just stow them on my head while pedaling and keep ’em in the included hard case between rides. Overall, the performance of the lenses, the eye protection they provide and the integration with the Forefront 2 helmet make for an awesome combo. The price is certainly premium, with this full setup retailing for $400, but it has the performance to match and I can’t find a whole lot that I don’t like about either product. If you’re in the market for a new helmet and glasses, definitely give this setup a look.

Check out more at SmithOptics.com