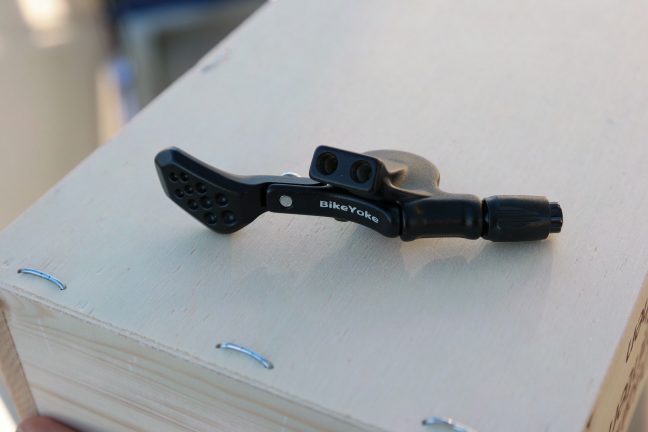 At least at BikeYoke we’d love to immediately make every little idea we have come real. And that’s why we are coming up with a bunch of smart little products that make your bike even more pornicious.

The current Triggy comes in two versions to accommodate different cable mounting styles. The Triggy received an update to allow both clamping the cable or housing the nipple of fit in one remote. This makes Triggy compatible with basically every cable actuated post available.

There will no more be “front” and “rear” options, as the new version contains both already. Geometry and design remain untouched and still offer 12.5mm cable pull at a maximum throw of 49°.

Despite the new features and keeping finish quality and materials 24g lightweight, Triggy can be offered at a lower pricepoint than its predecessor: MSRP for the US is $60.99

Triggy X is based on the design of Triggy, introducing a slightly longer and length-adjustable paddle. 6mm adjustability allows fine-tuning of the lever position, as well as tuning of leverage to adapt to different seatpost designs and reducing the required lever force.

Triggy X is bolted onto the handlebar via BikeYoke‘s clever Splits clamp, which snaps over the handlebar without having to remove grips or brake levers. However, Triggy also fits any other clamp or adapter, which can mount a SRAM trigger shifter. “Matchmakers” from SRAM or Magura are popular to mate a Triggy with an existing brake in order to save an extra clamp for a clean cockpit. BikeYoke also offers I-Spec adapters that allow mating a Triggy with Shimano brake levers. Triggy X has a maximum lever throw and cable pull of 40° and 11mm. Weighing in at 25g, Triggy X is only 1g “heavier” than regular Triggy.

Triggy X retails for an MSRP of $67.99 USD and is available from www.bikeyoke.com or your local BikeYoke dealer.

One would think, that seatpost clamps are nothing to really think or worry about. Not so much wrong, but not so much right either. They do keep seatposts in place. However, dropper posts can react sensitively to squeezing, and that’s right where Squeezy comes into play. Usually, seatpost clamps have a collar that prevents the clamp from slipping down the seattube. Now, unlike other seat clamps, Sqeezy has a collar-less design. Collars are basically just a installation aid, but in fact they stiffen up the clamp locally and hinder it from bending and distributing the clamping force evenly.

Squeezy acts like a thin aluminum band, that perfectly snuggles around the circumference of your seattube and smoothly secures your seatpost in place. Compact design of the Al-7075 T6 aluminum body and the Ti-6Al-4V titanium bolt placed as close to the seattube as possible allow even distribution of loads -and as we ?ve learned, dropper posts in particular can benefit greatly from smooth -not puncural load distribution. 3 machined “Slip-Stopps” prevent Squeezy sliding down the seattube during installation. Needless to say, that top-end machining and materials result in an extremely low weight –namely 7.9g for the 35mm version.

Squeezy comes in two sizes for the most common seatpost diameters and retails for an MSRP of $32.99 US. You can get it from www.bikeyoke.com or from your local BikeYoke dealer.

Creaking is the worst and so it is very good advice to keep dirt outside your frame. Not always easy to keep it clean when riding in rainy weather, when it’s the most fun. Surely, you ?ve noticed your seat-clamp covered in loads of mud after a wet ride. Willy does not more, but also not less than the DIY-old-inner-tube-and-zip-tie-solution, but we think Willy looks a lot better and doesn’t cost a fortune. Willy will fit 30.9/31.6 seatposts and frames that are designed for those seatpost diameters.

Willy retails for an MSRP of $8.99 US and is available at www.bikeyoke.com or from your local BikeYoke dealer.