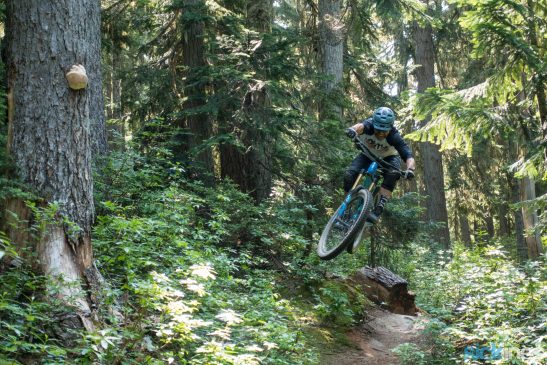 I have just over two months of summer fun on the 2018 Orbea Rallon, time to wrap this one up…

My tester Rallon M-LTD arrived mid-June, just hours before kicking off a big summer road trip. The build up went smoothly and you can see the full details in Part 1 of this review. Since then I’ve logged hundreds of miles and tens of thousands of vertical on everything from pure XC to hardcore enduro to bike park laps. Read on to see what we thought of this lovely lady.

First ride out, the Rallon was set up pretty much stock as it came out of the box. Save for swapping the 2.3 Aggressor for a 2.5 and my preferred contact points, I left it bone stock, including those low rise bars. You might recall the flip chip settings are low and lower and my Rallon came out of the box in “low” so I left it for the first ride.

We were up on Teton Pass in Jackson, WY shuttling the laps on Fuzzy Bunny and Jimmy’s Mom. Fortunately, I already knew these trails well as the first couple pedal strokes I took on the Rallon were right in to a jump run down Jimmy’s. Through the first few sections, I was certainly a bit wooden but it was immediately clear that the Rallon gains momentum with ease and finds traction with relative ease. I made a couple runs and while it flew up the short climbs, it wasn’t giving me that “locked in, let’r loose confidence”. I had a spare set of 25 mm rise bars in the truck so I swapped them in and flipped the chip to the “lower” setting. Bingo.

Next run down; berms shralped, jumps boosted, rocks rolled. Turns out, the Rallon has two completely distinct personalities. Once I dropped the geo to the lower/slack position, I never even considered flipping it back. This bike just rails with BB slammed. Over subsequent runs, I threw a few volume spacers in the fork and bumped the psi up into the high 70’s and got the DHX 2 to settle down a bit. In a matter of a few runs, I went from wondering if I was reviewing a long travel trail bike to starting to see that pure “Enduralin” side of the Rallon.

Jumping back to round out my thoughts on riding with the flip chip in the low (higher) position and the low rise bars. In that config, it’s the bike you want to take for one of those extra special, monster vertical, adventure rides. It’s still a 150 mm 29’er and more than enough bike to gobble up most any normal trail but with your weight shifted high and forward and that 76º seat angle, it’s a beast to climb on. Traction is just off the charts and throughout the summer I found myself making all kinds of crazy climbs with ease. It’s almost like the Rallon doesn’t just find traction, it makes it. So much so, that on more than one occasion I fully looped out trying to make the last couple strokes up a climb. There’s not much efficiency to want for either. There’s not really much need for the Pro Pedal lever to be flipped to firm as long as you’re seated and climbing with something half way resembling a smooth cadence. Since I like to stand on the long, steep fireroad climbs that are common around my home trails I did tend to flip the lever to firm for those sections.

Traction is not exclusively a trait of the Rallon’s climbing prowess and it’s really quite interesting how it achieves it. Most bikes that I’ve ridden that achieve particularly high levels of traction have a couple of common characteristics. The chassis is not too stiff, the suspension is plush and grounded, and, of course, the tires are big and sticky. The Rallon finds traction through a slightly different approach. The chassis isn’t just “not too stiff”. It’s stiff where it needs to be, around the BB, but it flexes along the length of the chassis from head tube to drop outs in an almost perfectly even pattern. It’s one of the few 29’ers that I’ve ridden that is compliant without feeling loose in the rear. This give combines brilliantly with a suspension tune that’s much more on the side of lively and playful instead of planted. Pointed down the fall line, the Rallon pushes you to get off the brakes and hit that sketchy sniper gap and then lock into that loose, rutted out sweeper.

As the summer went on and I started to push the Rallon on harder and steeper lines in and around Whistler I did find a couple short comings in the suspension. Out back, I found the DHX-2 coil shock to be a bit too linear for the Rallon’s kinematics. I had the sag bang on 30% with a 450 lb spring. Bumping to a 475 lb spring and 28% sag helped a little and I actually preferred the feel. From there I experimented with the boost chamber pressure to increase progression in the shock. Starting at about 150 psi, I worked my way up to 195 psi which helped bottom-out some but at the expense of traction. After quite a bit of fiddling, I decided that the DHX-2 is the right shock for lighter riders and average weight riders who don’t ride aggressively. Fortunately I was able to swap my coil for a Float X2. The coil went to a 120 lb rider and has been brilliant since. After a little fiddling, I wound up with 170 psi and 5 volume spacers. Incidentally, 5 spacers is the max for 230 x 60 X2. So yeah, a coil was never gonna work for me and that’s just fine because the air is really good on the Rallon and it’s a bit cheaper option.

Up front I made an adjustment too. I want to preface this part with pointing out that I have the luxury of living along a 4 hour stretch of road that connects Bellingham to Pemberton via Whistler and Squamish. Our XC trails are rowdier than the DH trails in some parts of the country and it just goes up from there. In stock trim, the 160 mm Fox 36 is all this bike needs to handle most situations. But I get to ride the Whistler bike park and all the crazy enduro trails around it and at the upper-end, the Rallon wasn’t quite enough. Fortunately, an air shaft and damper swap is pretty easy and I had my fork to 170. It’s always surprising what a difference 10 mm can make, especially up front. With the bars a little higher and the luxury of dropping the fork a few psi to right at 78 psi while sticking with the 3 tokens I was running in 160 mode, the Rallon absolutely charged the steeps. The BB remains plenty low for that locked in feel and the difference in reach seems purely academic. But this mod is not without it’s drawbacks and it’s not for everyone. The taller front end and shorter reach put a dent in climbing performance. To compensate, I slammed the saddle all the way forward on its rails to get the effective seat angle closer to stock. I’m not saying Orbea got the fork spec wrong, just that if you’re picking one up with the intention of riding steeps and big holes you might want to consider this mod.

Beyond the fork and shock tweaks, the remainder of the spec was fairly spot-on. The Code brakes were a perfect match for reigning in the speeds the Rallon is capable of. I swapped the rear rotor from 180 to 203 mm, but again, lots of bike park laps and rowdy alpine descents are hell on brakes. What’s to say about the Eagle drivetrain? It’s the standard and as good as it gets for now. I didn’t know what to the expect out of the DT Swiss XMC 1200 carbon wheels but they kinda surprised me. In fairness, at an MSRP of $2870, they better be damn impressive. I ran a CushCore in the rear primarily for support at low psi and for a bit of extra protection. I didn’t outright abuse them, but at 1580g I was a little surprised they survived a few days in the Whistler Bike Park and plenty of rowdy trail miles. The only real issue I had was with the flexy XX1 crank arms rubbing the chainstay guard. I couldn’t really feel it while riding but after a bunch of miles, I can see a little contact wear. My Rallon was delivered with the outgoing XX1, new bikes will have DUB cranks. Back to back, there’s a noticeable difference in stiffness and I doubt this will be a problem with the new bikes.

Wrapping it all up

So there you have it. Two and a half months of caning this bike down some of the most heinous trails in the PNW and coastal BC. Nothing broke, the frame doesn’t have a single creak. I haven’t so much as touched a pivot. Not a single major component failed. More importantly, I just can’t get enough of that chassis. There’s enough precision to get on any line you want and enough forgiveness to keep you on that line through the busiest sections. Excuse the hyperbole but the Rallon is a two wheeled traction factory. It can make traction out of almost anything. Dust or mud, gravel or sand. Whatever ya got. It don’t matter, the Rallon will stick to it. It’s almost a bonus that it climbs so well. But, this is a $9000 carbon super bike and anything less would be unacceptable. Fortunately the Rallon is good, really good.

What would I do differently? I’d love to see Orbea offer a 170 fork option in the MyO configurator. I’d also love to see them tweak the linkage for a little more bottom-out control so that I could go back to the coil shock. Other than that, the bike is dialed. Is the Rallon for you? If you’re an enduro racer, it should be near the top of your list. If your home town trails are kinda mellow but you need a bike that can still hang for weekend bike park and shuttle laps, the Rallon is a killer option for a one bike quiver. It’s probably a bit too much bike for someone who exclusively rides mellow trails but then maybe it’s just the bike you need to take your riding to the next level. The devil whispering in your ear. Faster, boy, faster…

Note on 2019 spec changes.
It’s late in 2018 and there’s a good chance that if you’re looking for a new Rallon you’ll be on next year’s model. The M-LTD moves SRAM DUB cranks and BB, the dropper post will be a Crankbrothers Highline, and the DT Carbon wheels are replaced with Enve M730’s. If you want all the details, head over to Orbea’s site.