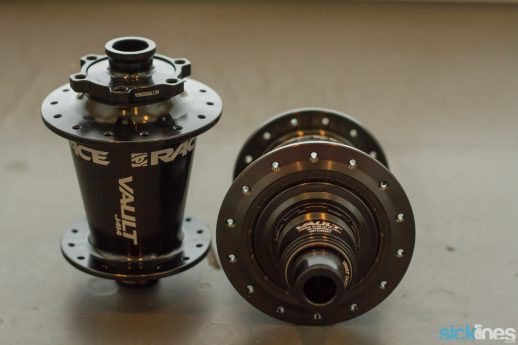 We laced up a set of Race Face’s build-your-own wheel components and thrashed them for a few months, read on to see what we thought…

In case you missed it, Race Face rolled out the availability of their ARC Carbon rims and J-bend Vault hub components this past winter. This means all you DIY wheel builders have yet another option for a quality wheel set. Race Face sent us over a set of rims and hubs for us to lace up our selves and see how they perform.

The straight pull version Vault hub has been around on the Turbine R and Next R wheel sets for a while now and has earned a solid reputation. Race Face has made that same pair of hubs available in J-bend configuration as separate components. The spec sheet for the Vault hub reads like a hub geek’s wish list including a 6 pawl design that engages 60 tooth drive ring at 120 points for 3º of engagement. The end-caps and freehub body are a tool-free design for quick and easy service or swapping between the available Shimano and XC freehub bodys.

The Vault hubs are sealed up tight from the elements with a labyrinth seal system. The design employs layers of seals that help to keep contaminents out while avoiding introducing unnecessary drag. In the shot below, I’ve pulled the freehub body after a couple months of riding. We had a pretty wet spring in the PNW followed by a dusty summer and the grease is still very clean. Based on what I’ve observed, I suspect maintenance intervals will be few and far between. Even better, these features don’t seem to incur much of a weight penalty with my front hub weighing in at 193g and the rear at 314g.

The ARC carbon rims are available in 27.5″ and the 29″ diameter tested here. They are 31 mm wide internally and are available with either 28 or 32 holes. Those spoke holes are offset 4.5 mm which promises balanced spoke tension and added durability. Race Face places the ARC Carbon rims in the enduro / all mountain category so it’s no surprised that they are not ultra light at a claimed 445g for the 27.5″ variant and 495g for the 29″ version. Those appear to be honest weights with one of my rims weighed in at 482g and 500g. My rims arrived with a sharp and stealthy looking black decal set although colors are available.

For spokes and nipples, I settled on tried and true Sapim CX-Ray bladed spokes and alloy nipples. I’ve built quite a few wheel sets with CX-Rays over the years and found the durability to be excellent. Working with bladed spokes also tends to result in a slightly less stiff wheel set, which I tend to prefer, particularly when carbon rims are involved. A full set of spokes and nipples for my 28 hole build 29’er wheels weighed in at a scan 299g which brings me to a respectable but confidence inspiring 1788g total weight for these wheels.

I could have been predictable and threw these wheels on a long travel enduro bike but I decided to go a different route and hang them off of my Chromag Primer. The Primer is an aggressive all-mountain / enduro hardtail designed around a 160 to 170 mm fork. It is meant to be ridden hard and fast on technical terrain and without any suspension out back, wheel and tire performance communication is direct and any weaknesses are quickly exposed. I taped up these rims with some 30 mm Stans rim tape that I had on hand and spooned a 2.5 DHF II up front and a 2.4 DHR II out back. Getting the bead to seat took a little coaxing even with my full sized air compressor but otherwise they sealed up fine. I put 3 solid months of riding on these wheels including a big day of racing, several bike park laps, and somewhere in the neighborhood of a thousand miles of single track.

In reality, it didn’t take more than a few miles to get a feel for the Arc’s flex pattern. These rims strike a real nice balance between point-and-shoot stiffness. I feel like I can really pump and push the bike hard through dips and turns without feeling like my fillings are going to rattle out. Now well in to August, the summer dust is running deep and our local loam trails are sand pits. I have 4 sets of 29er wheels that I’j riding on a regular basis and I put the Arc/Vault wheels as a bit stiffer than the DT alloys I have around and right in line with the Reynolds and DT Carbons. I guess what I mean to say is that we’re thankfully well into a period where carbon wheels are no longer stupid stiff traction compromising hoops of death and the Arc carbons are right on point.

I would be remiss if I did not mention the tire pressures that I’ve been experimenting with and the role they play in all this traction. It’s no secret that dropping pressures elevates traction but it also tends to bring about an early death to carbon rims. At least, that’s how it used to go. Now, I’m sure you can still take it too far and, of course, there’s tire deflection, burping (which I’ve had none of), and the fact that as hard as I can push a tire at 170 lbs ready to ride, I can’t replicate a 220 lb rider hell bent on destruction. That said, I not only ran the tires on these wheels at 19 psi front, 21 psi rear, I raced on those pressures. With no tire insert. Yes, I pummeled these rims, bounced them off of razor sharp Pemberton rocks, plowed into roots, and cased jumps. I did ride flat out and what I did not do is crack a rim. I broke a couple spoke nipples slamming cuttys, again, I failed to break a rim. After a while, I got tired of trying. I mean, I wasn’t really “trying” to break them, just that I wasn’t not trying. Not at all. So, I threw in a Cush Core out back, not so much to protect the rims but to reign in tire deflection. This is how the wheels sit now.

Climbing might not be quite as exciting of a topic as rim smashing but I gotta sing a little praise for 3º engagement Vault hubs. I like stupid hard climbs almost as much as humbling descents. There’s nothing more exciting in climbing than eeking out a near failed ascent with a hail-mary ratchet that impossibly propels you over the top. There’s nothing more frustrating than going for that quick ratchet only to catch nothing but air and pedal strike in defeat. The Vault’s are right there with the best hubs out there from an engagement point perspective. Just the same, they don’t succumb to the excessive drag that plagues some high engagement hubs. The only less than perfect experience I had was an occasional skip for the first few hundred miles. Occasionally, it felt as though the pawls would not fully engage and the hub would skip forward. I pulled the hub apart and inspected it and found no obvious issues and over time the issue corrected its self. This leads me to believe my hub was slightly tight on tolerances. Three months in, it’s smooth as can be and right in its element tackling technical climbs.

Considering that my issues with both the rims and hubs were pretty minor, it’s hard not to recommend these components from a performance standpoint. MSRP on the Vault hubs at $175 front and $325 rear is actually a bit lower than some key competitors. The ARC carbon rims are equally well priced at $499. If you’re looking to build up a set of carbon wheels that you want to be confident will not only perform well but take a beating, the Race Face Vault hubs and ARC Carbon rims are well worth a look.