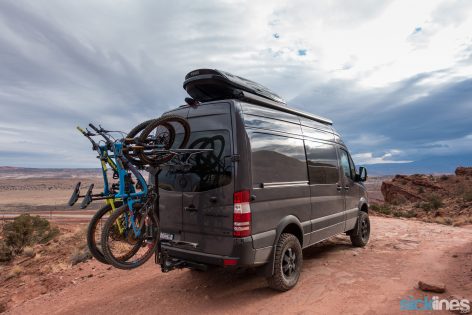 We spent 7 months and thousands of miles on the road with Recon Rack’s 6 bike hauler, checkout the full report inside…

Recon Racks is a small fabrication shop out of Ferndale, WA that builds some of the burliest racks I have ever set eyes on. Their rack systems carry bikes in a familiar vertical orientation but with numerous design details that set them apart from anything that has come before. Front wheels sit in the baskets at the top, touching only the tire, and the rear wheel sits against the lower bar, again with only the tire touching the rack. They offer the same basic layout in 4, 5, and 6 bike options. The racks are built almost entirely from US-sourced hardened steel and bolted together with grade 8 hardware. There is almost no plastic at all in the rack and really nothing that looks cheap, flimsy or anything less than completely over-built.

The bungee retention system seems almost too simple but it works perfectly and is super fast. Once locked in place, the bikes are not going anywhere. We did quite a few miles of rough dirt roads and even a bit of Jeep trail on our road trip and never once had a bike wiggle loose. I did notice that bikes with very low tire pressures do move around quite a bit. My wife often runs roughly 14 psi and her bike bounces and rocks side to side more than mine. The generous spacing between the bikes has prevented any of this motion from turning into bike-on-bike contact. In case you’re wondering, if you’re in a pinch, it is possible to carry a bike with either a front or rear flat tire. I tested this over a short distance and the bike did move around a bit more than with tires aired up but it didn’t result in any damage.

That is one monster pivot and it ensures the rack raises and lowers smoothly without developing excessive play. To release the pivot and fold the rack back, simply pull up on the spring loaded pin on top to lift the key out of the slot. If you have a full 6 bike load, be sure to have a good hold on the rack as it’s tipping back. Recon Racks specs a massive stainless steel key that slots into the hardend steel plates which they claim will prevent slop from developing over time. I don’t know if 6 months and 6000 miles counts as a long term test but so far, my rack is as tight as the day I brought it home. Note the two bolts on the vertical bar allow for height adjustment, I have my rack in the tallest position to provide the most ground clearance under the rear wheels.

A 5/8″ threaded bolt is supplied with the rack to secure it into your receiver hitch. This does a pretty good job over short distances but does tend to loosen over time. Once the bolt loosens, the rack starts to bounce. In fairness, this is a problem that has existed for as long a hitch mounted racks have been around and not specific to the Recon Rack. I added a cheap hitch-anti-rattle device which pretty much cures the issue although it and the bolt occasionally need to be re-torqued for maximum effectiveness.

The ambulance style rear doors of my Sprinter clear the Recon Rack with bikes loaded just by tilting it back on the main pivot. In case you run into interference, the rear tire bar is designed to swing away by releasing a single pin. It’s not really practical to do this with the bikes loaded but it sure beats having to remove the whole rack which would probably be a deal breaker.

At the Trail Head

One rather handy feature of the Recon Rack is that, in folded back position, it perfectly holds a couple bikes for pre-ride prep. This really came in handy on our long road trip. No need to balance bikes against the van or lay them in the dirt to make adjustments.

I picked up a rack in late summer and almost immediately set out on a 3500 mile road trip that included a ton of highway miles and quite a bit of dirt road and off-road. One of the concerns with traveling long distances is the potential for tire sidewall rub on the baskets. I gave this a solid test on the first leg of my trip where I drove a little over 1300 miles without adjusting the tire position. On arrival, I was happy to see that there wasn’t enough rub to be even a minor concern. I didn’t get to test with paper-thin XC tires but unless you plan on driving thousands of miles without changing the tire position, I don’t think there’s cause for concern.

There are a lot of reasons to like the Recon Rack but one thing that I was really struggling with was finding a rack both tough enough to use offroad and with a design to not hamper ground clearance. I picked up nearly 8″ of ground clearance at the rear wheel of my bikes which is often the first contact point when navigating deep washes and steep hills.

Wrapping it all up

After 7 months with the Recon Rack only a few minor concerns come to mind. At an MSRP of nearly $1200, I’d really like to see solution to keep it from bouncing beyond the simple threaded bolt. It’s a minor concern since a $15 anti-rattle-device did the trick but not everyone is going to be aware of this fix. The other minor quibble is the powder coat is peeling and rust is developing on lower bar where the rear tires rest. I could hit it with a little Rust-Oleum but then I’d be messing up the beautiful not-quite-black powder coat job. If it sounds like I’m reaching a little. You’re right, it’s one hell of a rack and it’s hard to find much to complain about. Is this rack for you? That depends. If you’re just looking to haul one or two bikes, or if your vehicle is not equipped with a 2″ receiver hitch, maybe look at something a little more light duty, like a 1-UP rack. If you have a rig with a 2″ receiver and a need to carry 4 or more bikes, including possibly up the roughest shuttle roads around, I don’t think you can do any than the Recon Rack. 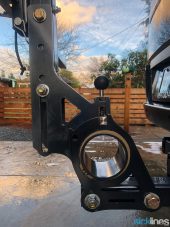