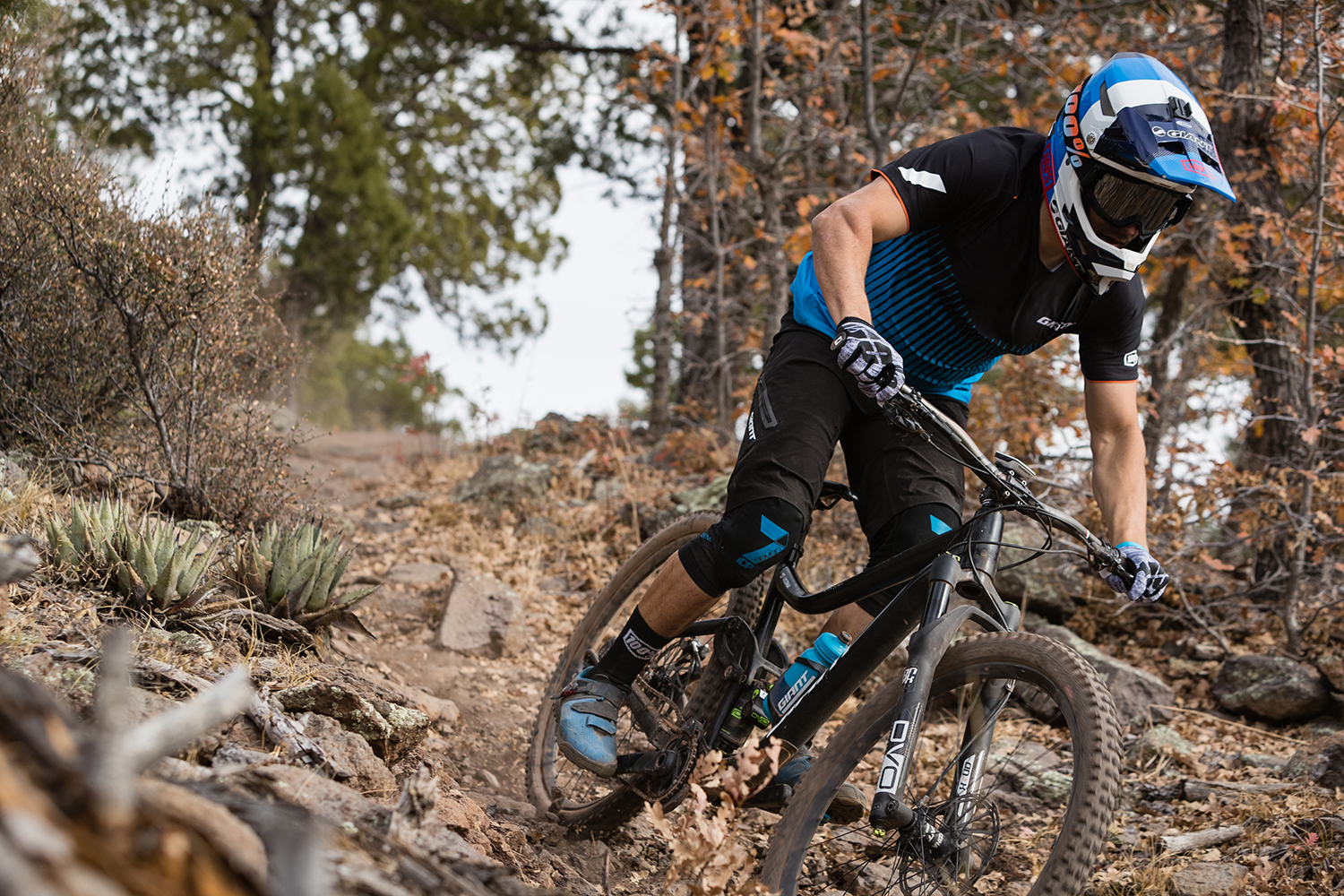 The 2018 Giant Factory Off-Road team has been announced and they’ve partnered with DVO suspension. Details inside about the team consisting of Marcelo Gutierrez, Eliot Jackson, Jacob Dickson, Josh Carlson, Carl Decker and more.

The Giant Factory Off-Road Team announced today that it is partnering with DVO Suspension this year in a joint effort to optimize the performance of the team’s full- suspension downhill, enduro and XC race bikes. All of the team’s Maestro Suspension equipped bikes will feature shock technology created by the California-based suspension company.

“This marks a new phase for the team,” said Giant Factory Off-Road Team manager Joe Staub. “DVO is bringing an entire suspension brand to support our team. That means we get unlimited access to their full scope of engineering, product development and attention to tuning, as well as race support.”

Gutierrez: Marcelo Gutierrez is a seven-time DH national champion in his home
nation of Colombia. For 2018 he will again focus on major downhill races around the
world including the UCI World Cup series.

With the start of the 2018 race season approaching, team riders have begun testing
their new bikes and gear, including new suspension setups. After achieving initial
suspension setups early in the year, a team camp scheduled for March will give the

DH, enduro and XC riders an opportunity to work closely with DVO engineers to fine-
tune their suspension systems ahead of key events.

“The relationship we have this year with the Giant Factory Off-Road Team is special
because we are really focused 100 percent with Giant and their off-road program,”
said DVO founder Bryson Martin. “From XC to enduro to downhill, all we do is focus
on the team—making the best suspension for the team guys and specifically for each
bike model and segment”

Martin said DVO will be creating and tuning shock technologies for specific usages,
and the unique demands of pro racing. “For enduro, we’ll have a rear shock and
matching front fork,” he said. “In downhill, where you’re pushing things to the extreme,
we have some really cool, outside-the-box product planned for those guys.”
Returning to lead the downhill unit this year is seven-time Colombian downhill
national champion Marcelo Gutierrez. Competing at the top level in the World Cup
and other elite DH events where bike performance is critical, and where results come
down to fractions of a second, Gutierrez said he is looking forward to working with
DVO.

“It’s great knowing they are going to be really focused on us,” said Gutierrez. “They
have the engineering experience, and we have the riding and racing experience.
Together, we should be able to create some amazing bikes.”

The downhill unit of the squad consists of Gutierrez, Irish national champion Jacob Dickson and American Eliot Jackson. Those three will focus on World Cups and other major DH events on their Glory Advanced race bikes. The downhill squad is coming off a strong season that saw Gutierrez land two World Cup podiums and win the Garbanzo DH event at Crankworx Whistler for the fifth year in a row.

“The product they’re providing us already, straight out of the box, is phenomenal,” said
Carlson. “The amount of adjustment, the feeling, it’s something that I’ve always been
searching for since I’d come to mountain bikes from motocross a few years ago. I’m
really excited to see the final outcome and it gives me more confidence heading into
2018.”

DVO Reign: Josh Carlson and Mckay Vezina will be at the complete Enduro World
Series on their DVO-equipped Reign Advanced race bikes.

Those racers will focus on a variety of major enduro, XC and gravel racing events in North America aboard their Anthem, XtC and TCX race bikes. Joining Decker on the regional squad are XC racers Stephan Davoust and Cole Paton, plus enduro racer and BMX Olympic medalist Mike Day.

“Each racer is different,” Martin said. “What they want from the suspension and how it
relates to the bikes varies. There’s a lot of stuff going on with the bike design. You’ve
got the kinematics and wheel base and then the individual aspect of the rider, how
they ride, their position on the bike. So we’re going to be able to specifically dial in
exactly the feel of the bike with regards to the suspension and make them go faster.”
You can follow the Giant Factory Off-Road Team all season long at
facebook.com/giantfactoryteam