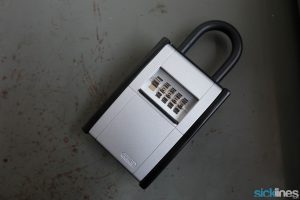 Abus KeyGarage Review – Keep your keys safe while you ride

Lately, I’ve been enjoying looking at products that aren’t really mountain biking specific but make mountain biking more fun. Abus recently reached out to show off their KeyGarage and it caught my eye as just that type of product. For those not familiar, Abus is a German based security product manufacturer with product lines for bicycles, motorcycles, and homes. As you may have already figured out, the KeyGarage is a crossover item from their home security line.  Its original intention was to hold house keys and be hung on a door knob.  It turns out the same shackle that would normally hold the KeyGarage to a door knob is also perfectly suited to grasp any fixed loop on your vehicle.  The idea here is to provide an alternative to carrying your keys or trying to hide them somewhere.  The device it’s self is pretty solid feeling, the body is entirely made of metal.  The shackle is made of hardened steel to resist tampering and coated in plastic to keep from scratching up whatever you hook it to on your ride.  A user settable 4 digit code keeps your keys locked up tight while you ride.

Setting your own code is simple as opening the KeyGarage and pressing the reset button to the left and down.  Then simply roll the code to your desired setting and release the reset button. It’s quick and easy enough that one could conceivably even set a temporary code and then change it again to revoke access.

The body is big enough to hold a set of keys maybe an access key card and few bucks, not much more. I suppose that’s pretty much all the room you need since once you have your keys you can get whatever else you need from inside your car. I did note that with larger key chains it can get to be a game of Tetris, for best results just throw a single key in there and be done with it.

Putting this device to use is pretty straight forward, so long as you have something to hook the shackle around.  I’ve just been hanging it on one of the loops on my receiver hitch.   If you happen to drive something without something so obvious to tether this thing to, you might have to get creative.  In terms of security, the box quite frankly, seems almost over built.  I certainly won’t be sweating it out worrying about someone swiping my keys out of it. Even it it’s possible to jimmy the lock, it’s still a big step up from stashing your keys on a frame rail and hoping for the best.
.

I think it’s only fair to point out that you still have to bother to put KeyGarage to use. It’s not really a “solution” that you set and forget. Every ride you have to hang it on your car and remember to put your key in it every time. It’s not automatic. It’s also not waterproof so no electronics are going in there (I haven’t had any problems with key fobs) but then it’s not really big enough for that either. Personally, while I’ve never really had a problem loosing keys out of my pockets, I do a fair amount of surfing in between rides and modern key fobs and salt water don’t mix. For that reason alone, it’s a slam dunk for my needs. Combine that with being able to throw my key in the box on shuttle days to guarantee it’s with my truck when we get to the bottom and I’d say the KeyGarage makes a hell of a lot of sense. I’d say that it’s a pretty solid buy at an MSRP of $39.99 as long as you understand that it’s just a box to hold your keys and it’s entirely up to you to remember to use it.