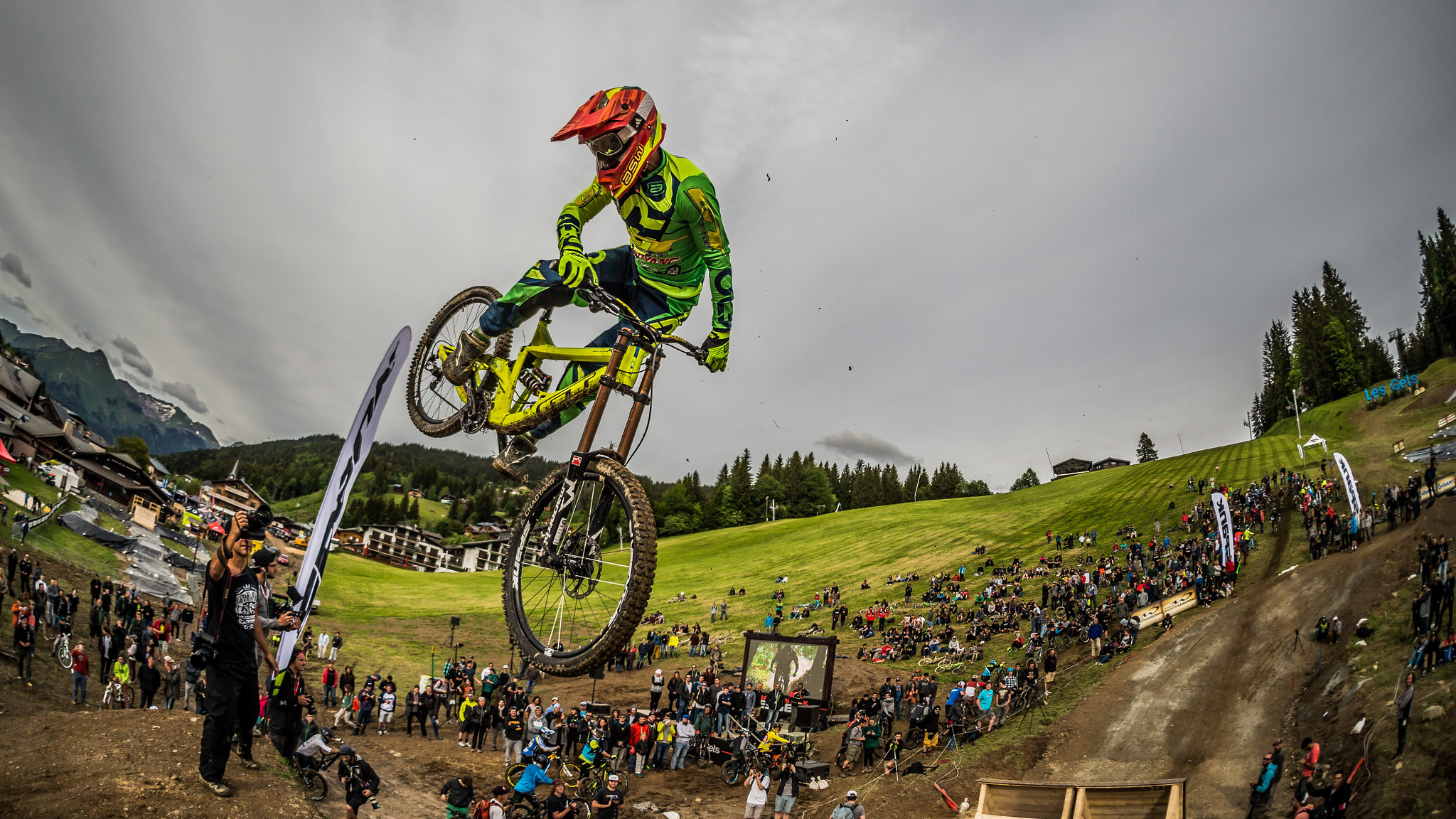 Crankworx Europe kicks off at a new location this year, Les Gets, France.  Check out the whip-off action inside from Crankworx.

FOR IMMEDIATE RELEASE
Les Gets, France, June 15, 2016—The deluge making headlines across France brought new game to the European Whip-Off Championships presented by Spank in its inaugural trip to Les Gets.

Starting up a mud-slick hill and heading toward a wooden ramp and gap jump, the riders had their work cut out for them, and the winners rose to the challenge.

“That was actually the hardest whip event I’ve attended ever. I’ve never really hit wooden jumps in my life, so it was a new thing for me,” said Casey BROWN (CAN). “I feel it was a good learning experience. I had to really tone my whip off a bit because I couldn’t really carve off the lip; I didn’t feel confident in that. So it was quite different.”

Brown effectively owns the women’s division of the event at the moment, having taken the win in all three stops in 2015 and the first stop of the 2016 World Tour, the Official Oceania Whip-Off Championships presented by Spank in Rotorua, New Zealand. Once again, she managed to get the most air and sideways style to take home the win.

Bernardo CRUZ (BRA) joined her at the top of the podium, after churning out run after run of amplitude-popping big air. He too topped the podium in the event in France last year, and said he wasn’t so sure he had it in the bag when he showed up.

Despite the mucky conditions, nearly 80 invited competitors came out to compete for the event, which also opened the first Crankworx Les Gets festival in the sold out resort in the French Alps. The qualifying athletes were whittled to 20 finalists who staged a 20-minute jam session commentator Cam McCaul was quick to label among the gnarliest he’s seen.

When the mud finally stopped flying, even the judges couldn’t seem to decide who should truly be labelled the winner. Though very different in their styles, Cruz whipping both ways and Howard claiming extreme amplitude, only one “super-clicked” whip Cruz threw down finally determined first place.

With several women in the women’s division, it was one of the best turnouts for the new sport. In the end, Brown bested Jill KINTNER (USA) and Elizabeth REDZBETZ (ITA) for the win.

The finals for the Crankworx Les Gets Dual Speed & Style are slated to run Thursday, June 16; however, weather conditions are expected to postpone the event to Friday, June 17. Please stay posted for news.

Results Women:
Casey BROWN (CAN)
Jill KINTNER (USA)
Elizabeth REDZBETZ (ITA)
Crankworx will be webcast live on Crankworx.com , and Slopestyle will be broadcast exclusively on Red Bull TV and Crankworx.com. The schedule is: