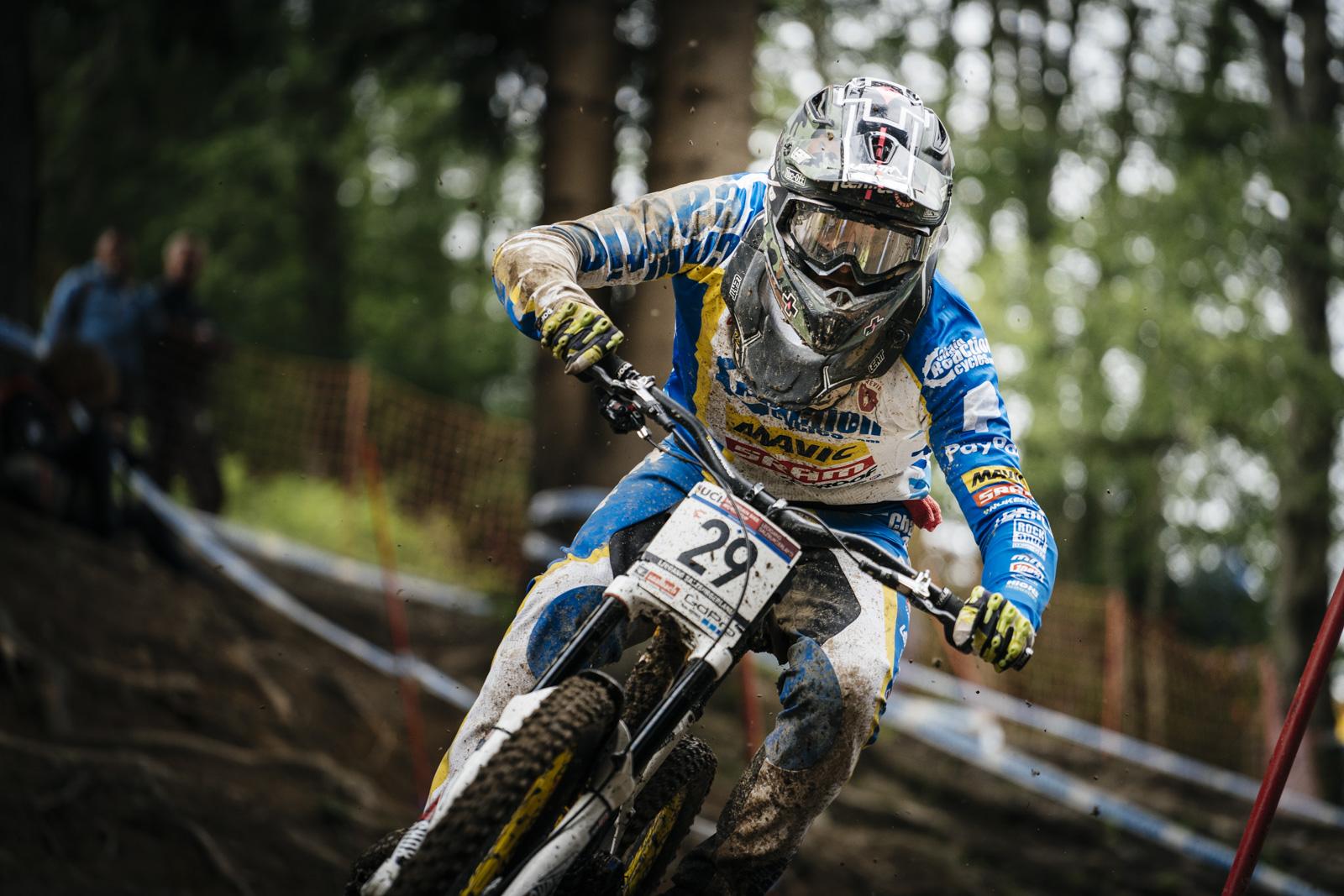 CRCPaypal had some impressive results during qualifying at Leogang and they’re proving to be a team to watch more and more each week. Mike Jones qualified 3rd but a few crashes in the finals dashed his podium chances. Sam Hill got injured and Joe Smith did well and ended up in 9th. Details inside from CRCPaypal.

Sam banged his knee up really badly in practice and tweaked his shoulder. After a trip to the hospital it was clear he was not going to be able to ride during the weekend. X-ray showed nothing was broken thankfully and Sam will get an MRI scan when he returns home to Australia this week just to make sure nothing is too serious. Hopefully he will be back, fit and ready for the next world cup round in Switzerland in three weeks’ time.

The rain came down hard before Saturday’s qualifiers making the track really slippery and difficult, especially the new open technical section up at the top of the track. Many riders were struggling to even ride it and stay on their bikes, but this made things better for our riders, Mike Jones, Joe Smith and Elliott Heap looked the best by far on this section.

Elliott Heap had a great run in the Junior qualifying round placing first, two seconds in front of the rest of the field which was amazing for his confidence going into the finals.

Joe Smith and Mike Jones, who were looking super fast throughout practice, qualified in third and 10th place respectively in the Elite men’s category, by far our best results this season and where we should be with the talent our riders have.

We were hoping for a wet race come Sunday as the harder the track conditions the bigger advantage our riders have but the sun came out and mostly dried the track up for the finals.

With the wet conditions earlier and then drying up it made some huge holes and many roots come out in the track, making it super rough and challenging for the final runs.

Elliott Heap was the last junior rider down in the finals after qualifying first and had a good run with a few mistakes to finish fifth again for the second time in two weeks. Not the result he was hoping for but getting close to that Junior podium and his first place in qualifying gave him the confidence that he knows he can do it.

Joe Smith had a great finals run and finished ninth, riding really well all the way down the track. This was an amazing result for Joe and the team. Well done mate.

Mike Jones was looking the fastest man on track in practice and with his third place in qualifying we were all hoping for a great result. I’m not sure what or why things happen sometimes in this game of downhill racing but Mike went out of the start super fast and smooth, like he was riding all weekend but then just washed out the front wheel in the fourth corner going down.

He was still only five seconds down at the first split time and we thought he could make some time back to still finish with a good result the way he was riding the track, but then in the open technical section where Mike was by far the fastest all weekend, his front wheel slipped again on the stump gap section and he went down again after nearly holding onto it.

This was super frustrating and disappointing for Mike and the team, as we all know he has the speed and talent to be on that podium but the luck is just not there right now. It will happen soon for Mike, I am sure.

The race ended up being a really fast and exiting one with a great crowd and congratulations to Aaron Gwin who pretty much destroyed the bottom half of the track after being 1.5 seconds down on Loris Vergier to take the win by three seconds. Pretty impressive stuff.

Thanks to all the team and everyone at Chain Reaction Cycles and Nukeproof, all our sponsors for their support.

We move on now to Crankworx in Les Gets, France.