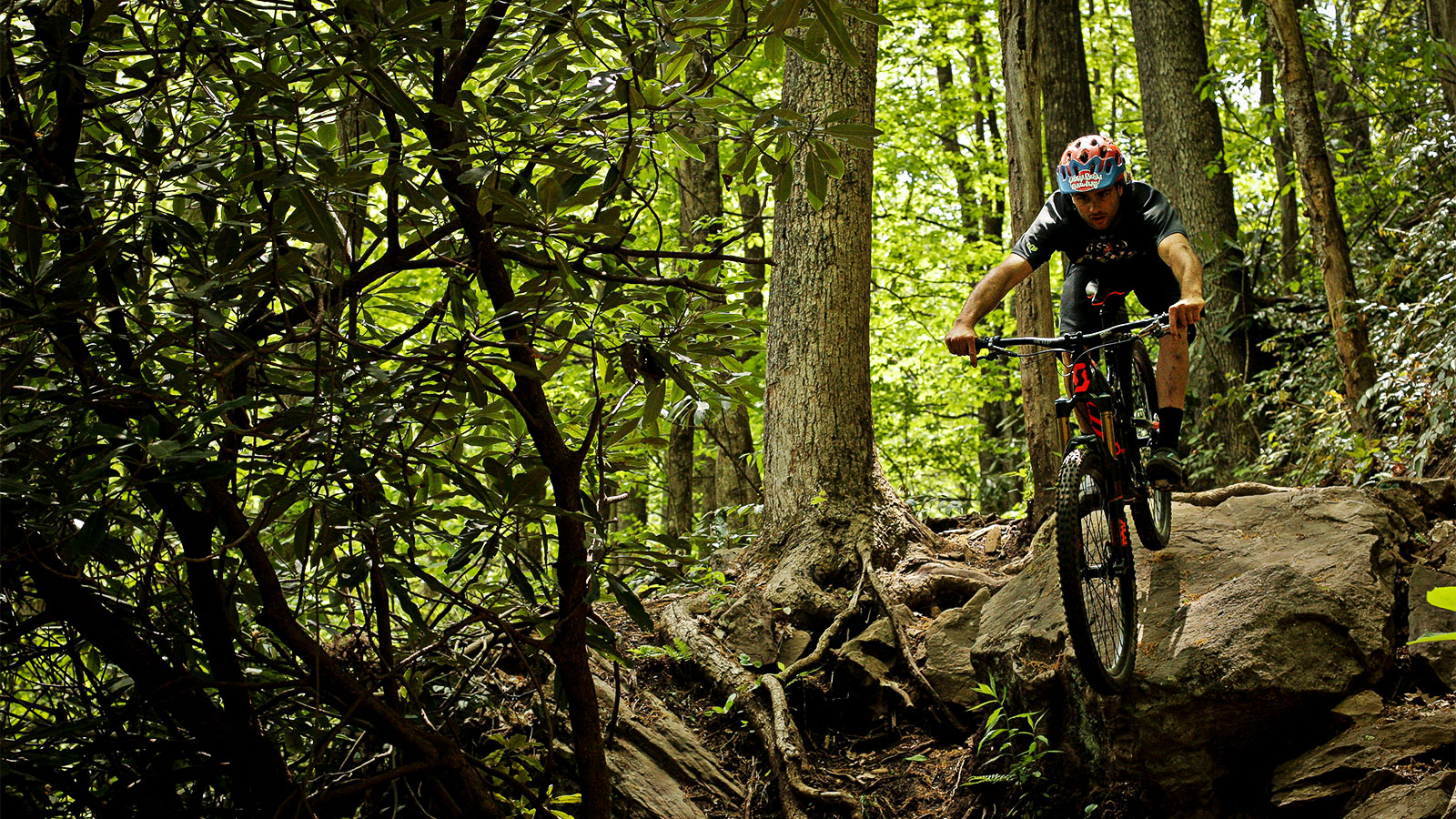 North Carolina has been the training ground for Neko Mulally. Check out the latest Scott Sports video inside featuring Neko on some great trails.

North Carolina, United States – The Blue Ridge Region of the Great Smokey Mountains is home to several of the highest peaks on the east coast. Western North Carolina provides mountain bikers with substantial mountains, the ability to ride trail year around, as well as an overwhelming amount of supreme singletrack.

These trails are considered to be some of the greatest and most renowned in the country, but still have the feel of a local riding spot. I was drawn to the area and all it had to offer with the hope of sharpening my skills as a downhill racer.

In addition to the volume of trails in the area, the terrain offers even the most advanced riders plenty of challenges. The tracks in Western North Carolina range from technical and rocky to groomed flow trails. The ability to ride year around is an appealing and convenient quality, especially for riders who would normally have to travel for offseason training. Unlike other year around riding destinations, this region offers almost every weather condition.

During the year, the trails can range from muddy and slick to dry and dusty. With such a variety of terrain and conditions, riders are able to prepare for anything the race season can throw at them. This aspect is certainly ideal, with a majority of my races based in Europe, where the conditions and terrain are constantly changing.

While the prime riding terrain makes this region extremely attractive, the strong cycling community and talented group riders is a valuable component. One of my best friends and fellow World Cup riders Luca Shaw lives nearby and we get out riding together on a daily basis. Having my brother and mechanic living here with me is also a huge bonus. This year Mick Hannah and Isak Leivsson based themselves here for the offseason as well, making the crew even stronger. It proves to be motivating and immensely beneficial to be training with some of the world’s top riders. In addition, there are several locally based cycling companies in the region, including Industry Nine, Cane Creek, and one of my main sponsors, Oscar Blues Brewery. It’s exciting to live in a place where mountain biking is so prominent.

For this edit, we really wanted to film trails that I thought would best represent the variety and quality of terrain that the area has to offer. Let’s start with DuPont State Forest—a 10,000 acre park with over 86 miles of unique terrain. The trail network in DuPont features lots of exposed rock, which is quite unique on the east coast. Due to the nature of the sand based soil and rock, it dries out quicker and makes it more accessible to ride in the wet, winter months. The easy access and beautiful views make it a popular destination for tourists.

DuPont is a refreshing contrast to the technical terrain of Pisgah National Forest. Although only ten miles apart, Pisgah’s terrain provides raw, rough trails littered with rock gardens and tons of exposed roots. Pisgah is considered a must-ride, mountain bike destination and pulls in thousands of visitors each year. This is where I do the majority of my riding so it made sense that this is where we focused our filming. We started on Farlow Gap, which is known to be one of the longest descents in the forest. I consider it a real adventure trail because it’s so remote and deep in the wilderness. The trail later runs into Daniel Ridge, a technical descent parallel to a mountain river. The waterfalls are what make this part of the forest really special. The last trail we filmed was Pilot Rock, which starts near the Blue Ridge Parkway and descends into the heart of the forest. It features many rock gardens worthy of a downhill bike and some spectacular views.