For 2016 Scott Sports bike range look great and the Gambler is no exception. The Gambler is Scott’s full on downhill bike that you’ve seen Neko Mulally and Brendan Fairclough ripping on. Learn more about the 2016 Gambler 710, 720, and 730 inside.

The SCOTT Gambler 710 is a no compromises DH weapon. This is the rig that GSTAADSCOTT riders Brendan Fairclough and Neko Mulally rely on daily. With 27.5” wheels, a custom race tuned Kashima Coated FOX suspension and World Cup podium proven components, this bike was built for speed.
Equipped with a low and slack geometry, a long shock and a tweaked leverage ratio, the Gambler 710 will be able to handle everything in front of you. Following our belief that for every track there is a correct tool, this bike has been designed to be able to be converted to run 26” wheels as well.
++Shimano Saint Drive Train
++Shimano Saint Disc Brakes
++Syncros Components
++PF BB107
++DT Swiss FR570 Rims
++DT Swiss Competition / 2.0/1.8 black

All Scott Gambler’s feature 210mm of travel through their floating link, can run 26″ or 27.5″ tires, and have numerous adjustable points for the bottom bracket height, headset angle cups, and chainstay length.

Sizes are S,M, L. While many manufacturers have worked carbon into their downhill bikes, Scott’s Gambler offerings for 2016 remain aluminum.  You can see the adjustable chainstay holes and shock chips to adjust the bottom bracket height in the picture below.

Scott also offers the Gambler in a 720 and a 730 series option and the Gambler can be purchased as a frameset for those looking to build a custom one up.

The parts loaded onto the Gambler 720 may not be as high-end as the 710 model but the build spec is still quite solid. The frame still has all of the adjustability like the 710 as you’d expect. In place of the Saint components are mostly Shimano Zee in comparison.

The Gambler 730 takes things a step further and comes in much more affordable than the 720. To do this they again adjusted the components to suit the price point while retaining the adjustability in the Gambler.

The Gambler is a race-proven platform that many riders love. While Scott hasn’t introduced a carbon offering yet in this space, the aluminum offering is certainly no slouch albeit a little heavier than some of the competition as a result. The linkage looks complex but allowed Scott to fine tune their suspension curve. The claimed complete weights start out on the Gambler at 36.38lbs (16.50kg) which is not heavy for a downhill bike when you consider the terrain they can conquer.

Sizes are S,M,L which should fit most riders but it’d be nice to see additional sizes introduced to help more riders. Scott has given riders the choice to run a 26″ or 27.5″ platform as well still which is impressive.

The paint job on their 2016 range is bold and sharp which is looks great and will certainly sell a few extra bikes in 2016. 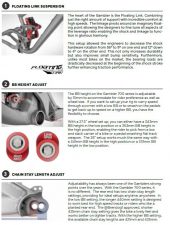