Many of the top athletes from 2014 were injured including Greg Minnaar(thumb), Steve Peat (ACL), Sam Hill(shoulder) , Gee Atherton (wrist), Steve Smith (foot), and others. The show must go on however and you can read more from the Lourdes race reports as well viewing Gwin’s winning run the Red Bull finals video inside.

With Peaty out due to an ACL tear, Josh still nursing his famous foot injury back to race pace, and Greg recovering from thumb surgery only two weeks ago, no one was quite sure what we’d see from Syndicate at the first World Cup. It was quickly evident that both Josh and Greg came to race, with Josh throwing down the third-fastest time in qualifying, and Greg getting steadily faster throughout the weekend. In fact Josh comes into the season already on a flyer compared to last year, where he started his campaign with only a 43rd spot before going on to claim the World Cup title. Peaty, never one to sit out, was in Lourdes to cheer on Greg and Josh (with chainsaws, of course)

The first round of the 2015 UCI Mountain Bike World Cup took place in Lourdes, France, over the weekend where young ripper Mike Jones won his first elite career podium with a third place for Team Chain Reaction Cycles PayPal.

Team Manager Nigel Page was there to bring us this report:

The season started off with a brand new venue in the famous and very religious town of Lourdes in the south west of France. The French definitely know how to build a World Cup-worthy downhill track and the fans came in their thousands to support the racers, making it an amazing start to the premier downhill series.

The track in Lourdes was technical, steep, dangerous and ridiculously fast. Riders had to lay it on the line to get a result and this made for nail biting viewing with big crashes, injuries and mechanicals. There were mixed emotions in the team camp as unfortunately Sam Hill, who finished last season on a high winning two of the last three World Cup rounds, had a crash last weekend whilst training on his downhill bike back at home in Perth, Australia. Sam hurt his shoulder pretty badly but thought after a few days rest he would be OK to race. This didn’t turn out to be the case as his shoulder was too weak to ride and so Sam had to make the tough decision to sit this one out. He was extremely gutted to say the least after a massive off season training program and a desire to start the season off as he left 2014.

All the team as well as what seemed like the whole mountain bike world was gutted to learn that Sam (barring a few of Sam’s closest rivals) would not be racing, especially here on what looked like a perfect track for Sam to pull off one of his amazing dominant race runs if all went to plan.

But we regrouped and stayed positive as we have another three amazing riders on the team and a huge thanks to Sam for helping everyone out over the weekend and showing Mike Jones all the lines he would have been taking.

First off come finals time in the races was our new first year junior rider Elliott Heap in his first World Cup race, only one year after first riding a downhill bike. Elliott stayed calm all weekend and rode fast and smart for such a young rider and finished 11th out of the fastest juniors in the world. This was an amazing result for Elliott and the team. It is great to have him on board – he is a fresh addition to the team and a super cool kid to have around. He, for sure, has a bright future ahead of him in this amazing sport.

In the elite men’s race, Joe Smith was off first after qualifying easily into the finals. Joe, however, was really suffering from hand pump on the fast rough track which was playing with his confidence and he ended up down in 57th place. Joe has the ability and speed to be top 15 at any World Cup so I know he was really disappointed especially after such a good result last weekend at the first British round on the podium. But we have a break now until the next round in Fort William, so Joe has time to regroup and be back where he should be at round two.

Then it was time for young Welsh ripper Mike Jones. Mike looked super fast and comfortable from day one. After walking the track and studying every line with Sam Hill, Mike was on fire causing a lot of talk from the top riders even stopping on track to watch Mike’s lines and copying him. It sounds easy to listen to Sam Hill and ride the track how he tells you to and hit the lines only he sees and can pull off, but Mike did just that and made it look easy with confidence and commitment that had my nerves in tatters.

Mike qualified comfortably in eighth place and we all knew he had the pace for a podium position if he pushed on and hit all his lines. He did just that with a race run that had us all in amazement. The commitment he hit the gnarliest of lines and how hard he was pushing had my heart rate through the roof and Mike held it together for his first career podium and a third place finish for the team.

The speed this young lad has risen though the elite ranks in only one full season as a senior is breathtaking and he definitely has the established top riders worried. Mike Jones has definitely arrived and only has one goal in his mind: to be number one.

Amazing result Mike, we are all so proud of you bud.

It was great to start the season off so well especially for all our sponsors that have supported us over the years and for our new joint title sponsor, PayPal. I hope PayPal are pleased to be partners with the best team in our sport. We had a lot of great comments from other teams and riders how cool it is for a company like PayPal to come into our great sport.

A big thanks to all our sponsors as always, and well done to all the guys at Nukeproof for their hard work on the new race bike. It worked amazingly and looked first class. Thanks to our mechanics Jacy, Brooks and Owen for keeping all the bikes running like clockwork. So that’s it for round one, what a result to kick off the season and hopefully Sam will be back for round two in Fort William, in June.

The standout ride for the team came on Saturday when Laurie qualified fastest in the juniors by close to 3 seconds over his rivals and in a time that would have qualified him 9th in Elite Men. His middle sector was only 0.5sec off fastest qualifier Loic Bruni (FRA), but unfortunately in the race run on Sunday Laurie arrived at a corner in sector 1 that had been blown out and had no chance to avoid it as he was already committed to his line. He didn’t crash but lost time coming to a complete stop on an important section for carrying momentum. Despite losing over 2 seconds he pulled back all but 3 tenths to finish 2nd. Laurie now sits 2nd in the overall World Cup standings heading to Fort William.

Laurie said: “So much to take away from the weekend. Seeing that I had comparable speed to the Elites was encouraging after all the hard work and training over the winter. Of course I’m disappointed not to have taken the win, but it’s a long season and I’m keen to get to Fort William which has been kind to me over the years.”

Brook MacDonald was looking for a solid top 10 on this new course and was a little disappointed to finish 12th but the points haul against some of his main rivals was very strong and Round 2 at Fort William promises to see Brook as a podium threat, like he was in 2013 finishing 2nd.

George Brannigan had great pace on the track and was bringing his New Zealand season form to the table in the qualifier where he would have finished top 6 had he not been slowed up by a rider who’d punctured and failed to clear the course. In the final practice session George had a small crash but damaged his Fox Forks and needed to head to the pits for a fork change. Unfortunately getting to the top of the hill 4mins too late and was denied a final practice run. This impacted his final race run as the course had changed to powder in many sections and a crash in sector 1 cost him dearly.

A spectacular crash for Greg Williamson ended what was shaping up to be a great run for the Scottish rider. Despite an earlier crash higher up on the course, Greg was 0.4secs up on the 2nd split but mechanical issues suffered in the first crash contributed to his dramatic flight over the bars, off the edge of a bridge and onto the road below. Fortunately not suffering any serious injury the crowd applauded as he walked away from a potentially nasty crash.

Greg said: “I literally found myself on a road and had no idea how I got there. It’s frustrating because I’d gained a lot of pace on this track after struggling on practice day 1. Practice prior to the race had gone great, and I was sure I could get a solid start to the season here. Time to ice up, recover and be ready for my next race in May.”

Team Director Martin Whiteley says: “A very interesting start to the season. New tracks often provide mixed results and the weather was also completely different to what we all expected; we ended up with 27 degrees Celsius and the track turning to powder. We’re fortunate to get through the event with everyone in one piece unlike some, and the new 2015 Trek Sessions performed flawlessly. Laurie’s pace is extremely exciting, but all 4 have shown this weekend that they’ve done their homework over winter, and if not for a couple of small errors, the results would have been quite different for us.”

George, Greg and Laurie will all compete in the 2nd Round of the British DH Series at Fort William next month. 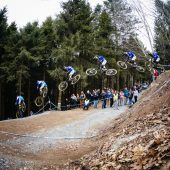